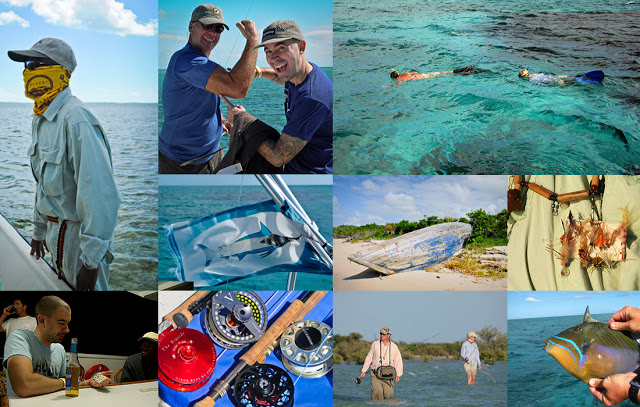 As the tide dropped, I made my way to the edge of the flat toward a channel of deep water.  I knew that big fish will eventually congregate in the deeper water and I could intercept plenty of bonefish fleeing the flat when the water quickly receded.  I cautiously waded towards the edge, my anticipation rising with each step, my high hopes set on hooking a memorable big fish.  With the edge now in casting distance, I stop and position myself, to see if I can spot any fish.  It did not take long to pick up a pair of bonefish moving along the edge of the flat, approaching from my right.  I calmly cast my Doug’s Crimp fly in front of them.  Without much inspection nor any hesitation, one of the fish pounces on the fly and I am hooked up.  After a solid run and fight, I land and release an average 4-lb bonefish.  We are not in Mexico, kids, and I know this area is home to much bigger fish.  Our group of renegade anglers has experienced great fishing, catching fish up to 9-lbs.  I just needed my skills to shine and the stars to align so I could successfully land the trophy-size bonefish I sought. 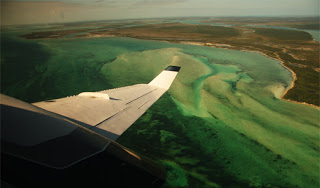 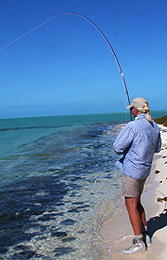 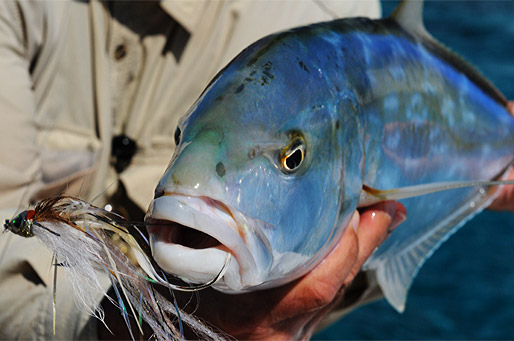 My bonefish guru, Scott Heywood of Angling Destinations, advised me to hang out once I saw fish because more would follow.  I took Scott’s advice since he had countless years of experience bonefishing throughout the world and was keen on their behavior.  Scott was right—headed straight towards me from the deep water was a massive shape that I first identified as a shark, but after a double-take I began to cast my Sage One 8wt to the big single swimming bonefish.  The Sage One did what it’s meant to do and the fly quietly fell into the monster’s path while I tried to keep my cool as that critical moment unfolds — the fish was either going to eat or ignore my offering.  I stripped the fly once and the fish slightly changed his course: I knew he was intrigued.  I stripped again and the fly line came tight.  I was hooked up to the monster!

Most of you avid This is Fly readers know I am an obsessed bonefish bum who will do just about anything to chase after these fish.  And by now you are surelywondering: “Where is Paris this time?” and “How the hell can I book the trip?” 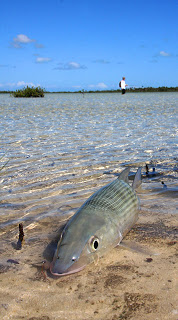 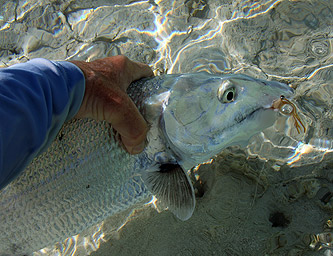 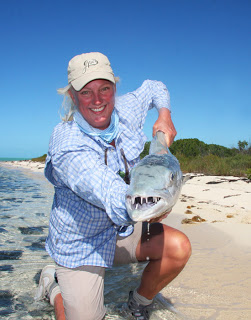 This trip, dear readers, was a part of my fortunate invitation to board the Sea Hunter, a fabulous yacht from Florida, currently anchored near the eminent Jackfish Channel on the southern tip of Andros Island.  Scott introduced me to the live-aboard experience and I really dig it, especially when the experience is set up as a series of exploratory adventures.
The reasons I enjoyed the live-aboard are simple: long days of hardcore fishing and access to unpressured water.  I am not saying that no one has fished South Andros, but when you are fishing from a traditional lodge, you are limited by the time of the day.  To escape the often-pressured water in close proximity to the lodge, you have to make long runs in the skiff.  Let’s face it: you can only go so far before turning around and enduring the long ride back to the lodge.  But in a live-aboard, you experience longer fishing days because your ride home is a mere ten-minute trip back to the yacht on your skiff.  The most exciting part of these trips is the rush of anticipation when scouting virgin water that does not get regularly plundered by anglers.  For example, aboard the Sea Hunter we hop in the skiffs and push our way beyond Grassy Cays up the uninhabited west side of the island.  This area is difficult to reach from the northern lodges and if you can make the run, the guides do not have much time to dial-in the tides and fish the most productive flats.  Aboard the Sea Hunter, we have seven days of freedom to push the limits of a conventional day of flats’ fishing. 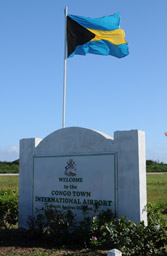 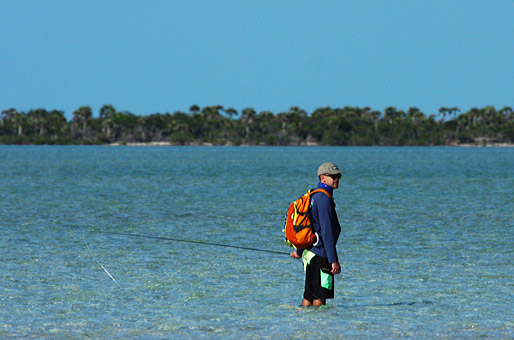 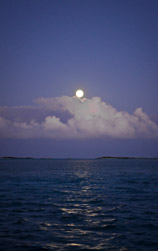 This trip is pitched to anglers as self-guided and hardcore: so be prepared to endure lots of wading and expect to spot your own fish.  Some might be apprehensive about this itinerary, but for me, these ingredients are ideal.  The chance to wade South Andros for an entire week is a dream come true.  I am fanatical when it comes to bonefishing and I easily get excited, but this opportunity set me off the charts.  South Andros does have a reputation for providing refuge to acre-size schools of smaller bonefish (which I usually shy away from) but this area also holds big bones, which I saw firsthand when I fished South Andros a couple years back and got a taste of Grassy Cay during a day of guided fishing.  I wrote a story on the trip in a previous issue of This is Fly entitled “Bonefish Heaven.”  Now I am fortunate enough to return to heaven. 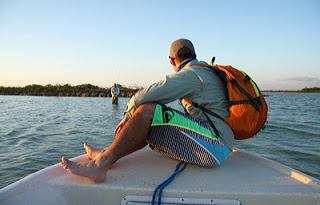 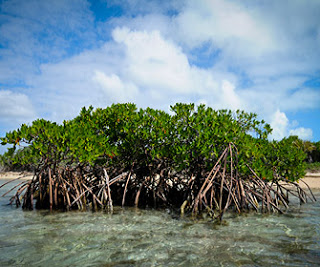 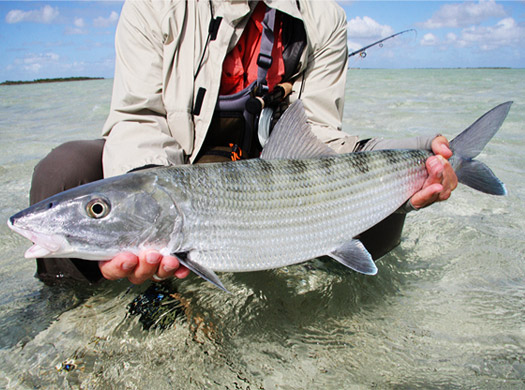 At 84-feet, the Sea Hunter is a steel-hulled ship that feels formed from one monolithic slab.  The Sea Hunter has two complete reverse-osmosis water-making systems that can create 80 gallons of quality bottled drinking water every hour and gives the grimiest of anglers that rare chance to enjoy a long, hot shower at the end the day.  Cooled by dual AC units and propelled by two 450-horsepower CAT diesel engines, she carries an average load of 16,000 gallons of diesel fuel, which allows her to sit steady in the water and have a global range potential.  This massive load, combined with her considerable displacement, buffers almost any sea motion while the Sea Hunter is at anchor.
Our group of renegade pirates includes Scott Heywood of Angling Destinations, Scott Sawtelle from San Antonio, John and Anna Riggs from Little Rock, and Jay Hillerson from Virigina.  The key to a memorable week on a live-aboard is to have a cohesive group with personalities that mesh well.  Our brew of personalities created a perfect concoction and everyone felt at ease, dedicated to the task, and focused on long days of wading and exploring the bounty of South Andros.  There were days when we opted to fish uncharted areas that could potentially produce poor fishing, but this group eagerly took that chance.  I tip my hat to each of them. 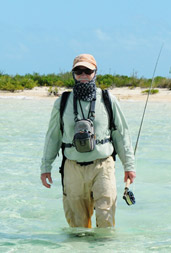 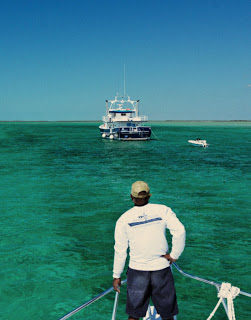 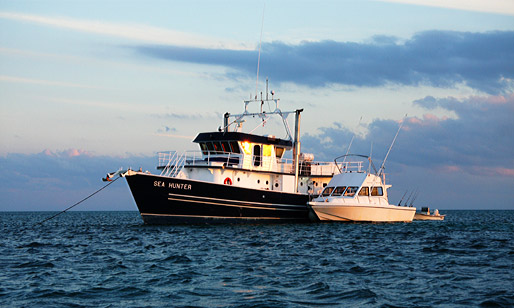 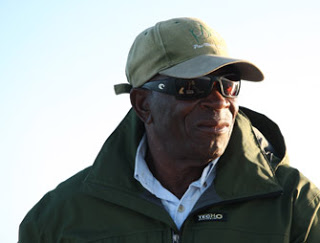 If you want a break from bonefishing during the week, the Sea Hunter offers diversity.  You can participate in spear fishing for hog snappers around coral heads, snorkeling, or awesome blue water fishing.  Besides towing two shallow draft skiffs, the Sea Hunter also tows a 34-foot sport fisher, equipped for offshore fishing.  Anchored close to the famed Tongue of the Ocean, a day of blue water fishing means access to a plethora of pelagic species.
But back to the monster bonefish I hooked at the edge of the flat that just peeled 150-yards of Dacron from the Abel QC reel.  The fish heads towards the mangroves on the other side of the channel, immediately giving me enough anxiety to warrant a dose of Xanax.  Everything happens excessively fast and I find myself motionlessly watching the crash course this bonefish has decided to take.  I ask myself if this is going to end like Thelma & Louise with the Cadillac heading off a cliff, but the fish stops short of the mangroves and starts to thrash his body, creating an impressive commotion.  I know what the fish is doing and I’m not happy about it.  I watch him thrash around and rub his mouth in the sand with hopes of dislodging the fly.  Just as I start to head into the deeper water in hopes of chasing the fish, the line goes limp and my shoulders fall in disgust, realizing I just lost the largest hooked bonefish of my career.  I had a temporary breakdown reaction consisting of  screamed obscenities, kicking the water, and punching the air, but I got hold of myself and snapped out of it when I remembered where I was.  Bonefish Heaven!