Back to top
From Cody west to the East Entrance of Yellowstone National Park and from there north to the Northeast Entrance at Cooke City, flow some of the most prolific, least fished and most beautiful trout waters in the Lower 48. The forks of the Shoshone River, the Clark’s Fork of the Yellowstone, and all the creeks draining into the Clark’s Fork from Sunlight Basin including Crandall Creek, Hoodoo Creek, Sunlight Creek, Dead Indian Creek and many many more offer simply phenomenal fishing. Float trips, wade trips, high mountain lakes... whatever you want, you’ll find here. You’ll need a good guide for this is no country to get lost in and the best spots are not easily found. You’ll also need a good pair of walking shoes and a willingness to use them, but the rewards are worth the effort. Probably nowhere else can you catch so many 16-21 inch trout so easily. And when (and if) you tire of all this outstanding water, you can turn to Yellowstone Park. Yellowstone is the ying to the previous area’s yang for THE park is not rarely visited by anglers. The Yellowstone is loved and Hayden Valley‘s legendary waters including Slough Creek, the Lamar River and Soda Butte Creek see tons of pressure, but hit it right and you’ll know what all the hubbub is all about:

As I dug my nails into cutbank, it began to rain lightly. Six feet from the top of the bank, almost at river level, a tine was now completely exposed. The horn seemed more rock than bone. I wondered how old an elk antler would be that was buried under seven feet of Hayden Valley mud. The skull was partially attached to the horn so this was not a shed horn. Was it killed by an indian or a bear or maybe a pack of pre-reintroduced wolves. After a few minutes, I had excavated enough of the antler to get a good grip on it. With a grunt, I pulled the horn from the bank. It was heavy with five tines, and very thick. This elk had been a healthy animal and probably had died before its time.
I had turned my attention to artifact in the cutbank because I was relaxed after a successful start to the day. I had just caught two sipping 18” cutts off the bank with a #18 baetis. Not much of a fly really. A bit of olive dubbing for a body and a palmered dun hackle tip for a thorax. The fly, although small, had been fairly easy to see since it was silhouetted against the steely blue light in the wind slicks. This pale light had reflected the rain squalls that were passing through the valley. The hatch that I had imitated to catch the cutts was now over, its end signaled by a shaft of sunlight that lit up a copse of cottonwoods trees upriver. It was beautiful. Sunlight always makes fall in Yellowstone seem almost painfully beautiful. 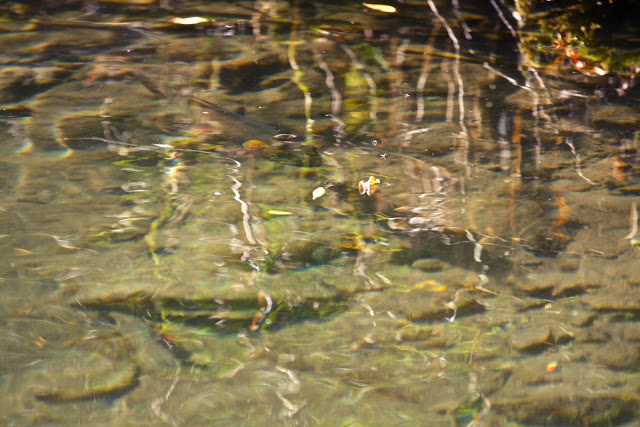 We had just experienced seven perfect days of weather, especially for late September / early October. During this spell, we had fished in consistent 75-80 degrees temps. This warm air swirled under a deep blue sky rarely fettered by anything close to a cloud. Weather great for hoppers and people, but not great for hatching bugs. Each day this good weather continued, I could feel the hatches building. A few bugs would emerge on these clear warm days, but nothing to get us or the fish excited. I knew that with the first significant cloud cover, every overdue bug on every river would be sprinting for the surface. Now with these rain squalls passing through, our morning’s sporadic hatch had seemed only a prelude to the big main event.
While taking in the heft of the horn, I heard a pop behind me... it was the sound a teenager makes with his mouth when removing a lollipop on a stick. I dropped the elk antler in the mud at the edge of the river and jerked my head to the right. Without looking down, I washed the mud off my hands as I searched for the source of the sound. Not ten feet below me I heard another pop, then saw the incriminating circles. This was not the sip of a trout on a measly little olive dun. This was a big revealing rise... especially for a wary Yellowstone Cutt. I hunkered down on the bank’s mud knowing the trout had never seen me as it moved to take this feeding spot, I wanted to keep my advantage and worked to keep my profile low. Soon, an armada of big drakes was tacking to leeward. Trout were gulping up these elegant duns as more and more little sails popped up. Suddenly no longer so mellow, I raced to change my fly. The trout that I had “popped” so close to me could now clearly be seen moving four or five feet to take a drake. I tied on a size 12 parachute drake and carelessly nipped off my tippet’s tag end. I flipped the fly ten feet across the river and tried not to move a muscle in the process. The fish quickly found my waking fly leaving a big bubble, a boil and a bent rod behind. Sometimes it is so easy.... 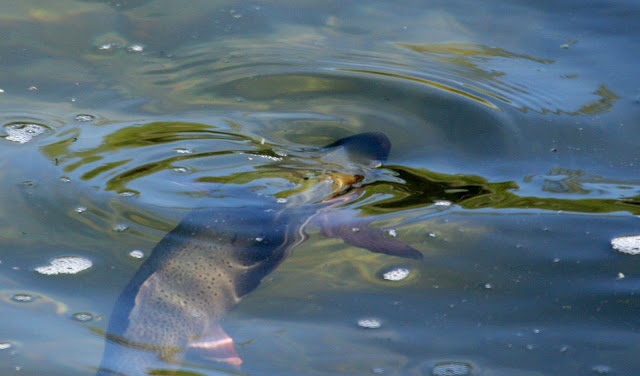 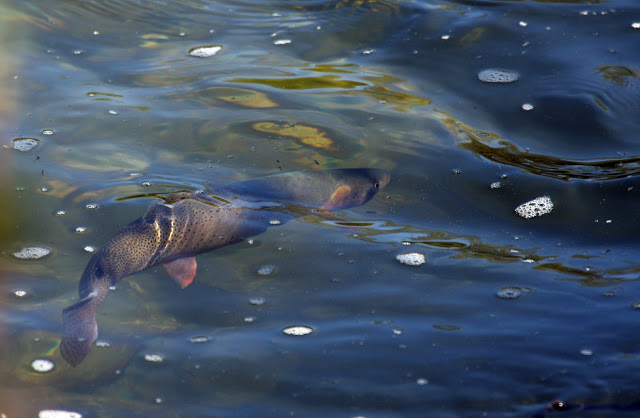 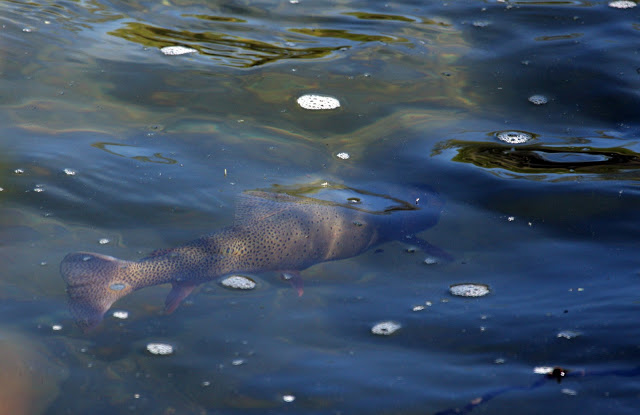 This was the beginning of three hours of heaven. As squall after squall swirled through the valley, the hatch went on and on. Sometimes the wind came from the south sometimes from the north, but through it all came the drakes. I on either shore created by the storms changing paths. Depending on the direction of the wind, I would look left or right to see big trout racing about in the narrow band of unriffled water next to shore not touched by the breezes. The trout would pick off drakes and I would see them hunting like one sees bonefish on a Bahamian flats. I could cast 15 feet ahead of these trout and they would accelerate to my fly. Sure there were refusals, these were after all, Yellowstone cutts, but there were plenty of takes too. I don’t know what was more fun... to see a 20” cutt race to a fly, put on the brakes and suspend under my fly to examine its authenticity or to have a fish eat in a lunging swirl.
OK, eating my fly was more fun, but the event was so engaging, I lost track of time. I could see the whole drama play out in these slicks. I watched cutts refuse naturals, compete with other fish to catch a skittering drake and change sides of the river when the wind changed direction. Sometimes fish chased drakes into absurdly shallow water. With the wind changing direction and pushing the big mayflies suddenly towards shore, brightly colored trout would turn on their sides to try and catch the big bugs before they were out if reach beached by the wind. There were no feeding stations now. The fish were on the prowl looking for dinner. Finally, it was all over and I was in a satisfied haze. Sated, I clipped a disheveled drake off my leader and yanked my Sage 4 wt. apart. It was 4:00 PM. The day had disappeared like a clipped breath on a cold winter day. 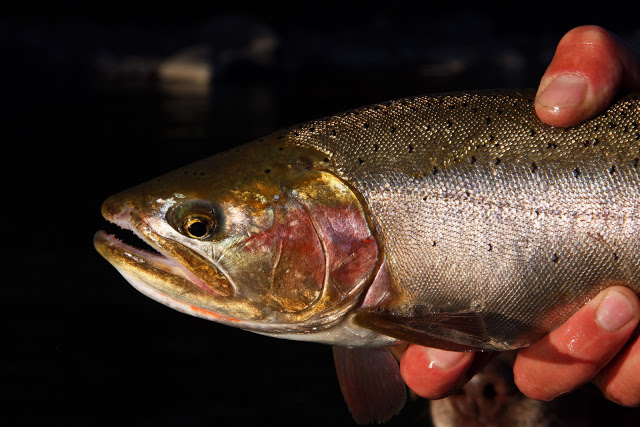 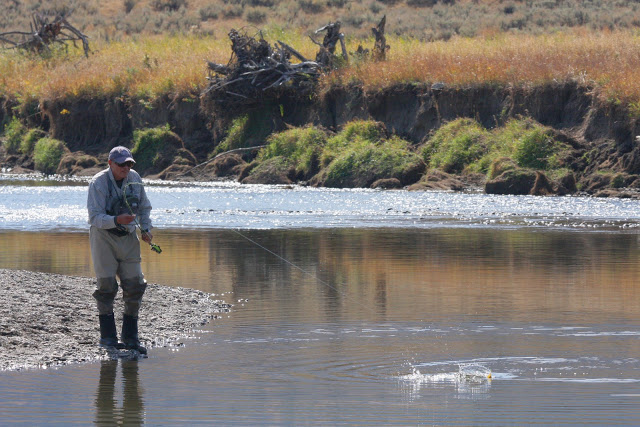 There was now a chill to the air and although it was hardly cold, you could finally feel fall.  I knew that long before winter storms piled up snow outside my home’s windows and even before the algae on my fish net has dried to a brittle junk, I will remember this day and long for yet another. I’m afraid I’ll have to wait awhile.