Back to top
I really enjoyed reading my old friend Jeff Rodenberg's trip report from his somewhat delayed honeymoon. Looks like they had a great time! If you are ever interested in a trip to Belize, give us a call at 800-211-8530 or go to www.anglingdestinations.com 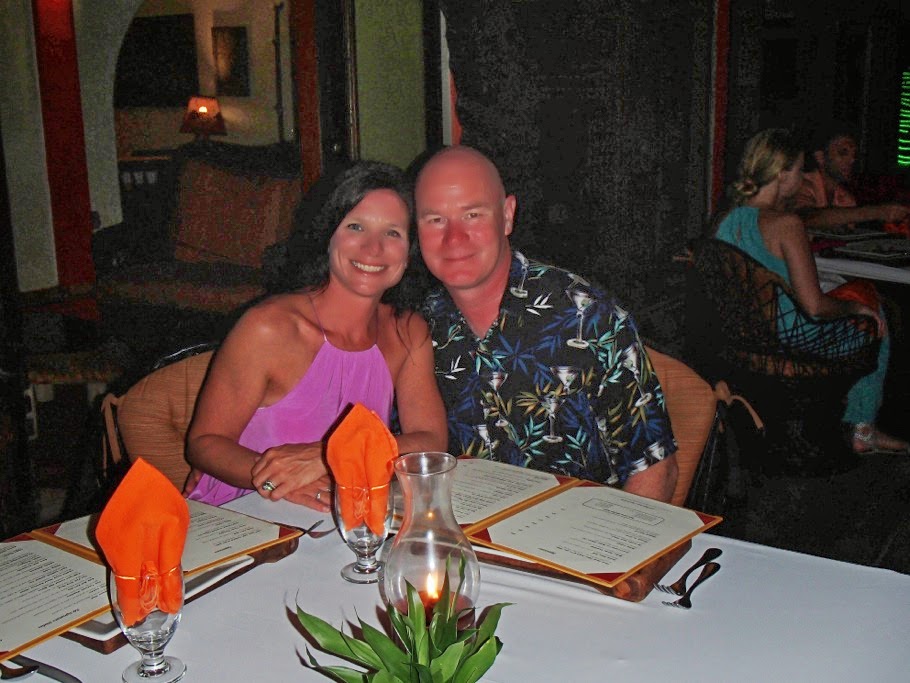 As you know, the main purpose of the trip was honeymoon, not bonefish and permit. However, one cannot spend all of their time just eating, drinking rum punch, sailing, sunbathing, snorkeling, tubing down a jungle river, shopping, more rum punch, poking sticks under trees to find a fer-de-lance, and other romantic diversions…so there was a touch of angling as well. A bit about the latter. 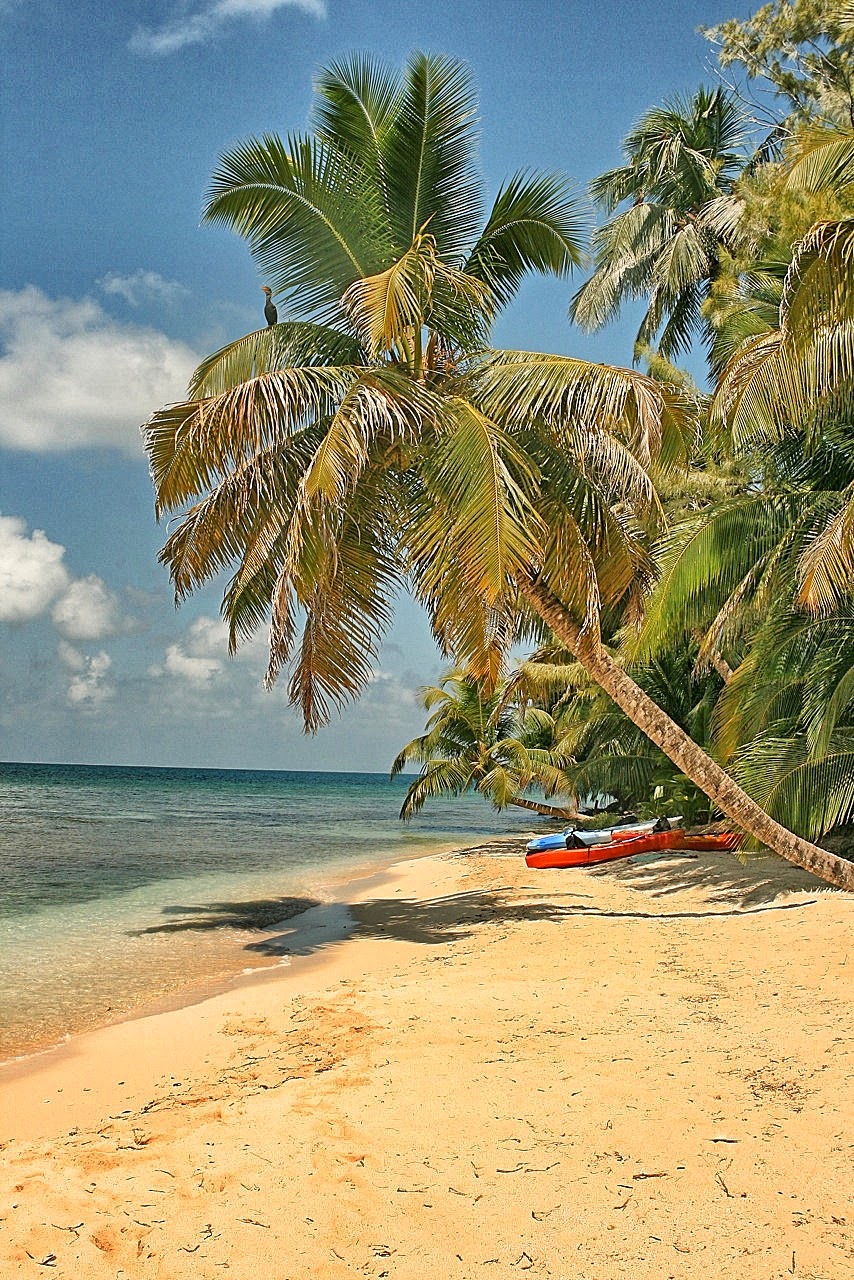 As part of the agenda, we spent 3 nights/4 days out on Ranguana Caye – about 20 miles off the coast SE of Placencia. If you’ve seen the Robert’s Grove info, it’s a whopping 2 acres in size, has 3 somewhat rustic cabanas and a couple of resort employees to feed and maintain the island and guests, a dining/bar palapa, a beach and some good snorkeling reefs a couple hundred yards out. When we first arrived, we walked up the stairs of our oceanside cabana and when I turned around and looked down in the water, there were half a dozen bonefish cruising not 10 feet from shore– not a one was under 5 pounds and a couple were pushing 8 or 9. They just kept cruising back and forth. I thought to myself, holy shit, I’ve hit the jackpot! Surely someone of my experience and skill could manage to land one with 3-4 days to get the job done…. 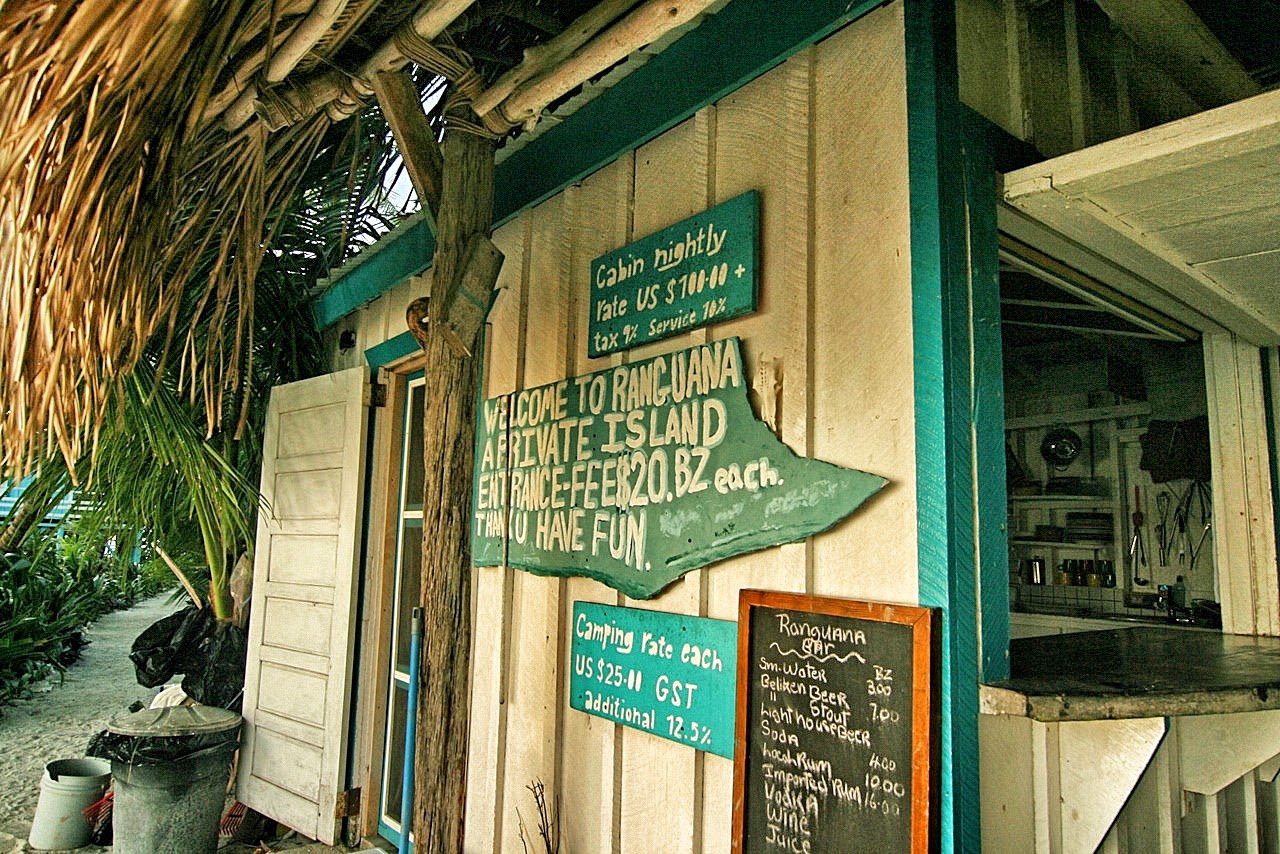 For several short periods throughout roughly 4 days, and much to Sara’s amusement from our cabana observation deck, I was Wile E Coyote (super…genius…) after the Roadrunner. I would sit on our deck and watch them cruising back and forth, scheming on ways to attempt their capture. At my most desperate point, I had been watching pelicans splash-dive into the water to slurp up jacks and other tasty morsels, and observed this often attracted 5 or 6 big bones to immediately race to the pelican’s feet. A couple hours later, I could see the bones coming in for a lap to thumb their noses at me, and I put a cast about 20 feet ahead of them, picked up the coconut strategically laying at my feet, and lobbed it out by my fly to make a big pelican-like attraction-splash. They weren’t fooled, but Sara was now laughing out loud from the observation deck…I could tell you it was the wrong tide, I had the wrong flies, or some other piece of drivel. But the truth of the matter is that those fish get pounded, frequently, by guides and caye visitors like me with a fly rod in spirited away in their luggage, and they had Ph.D.’s in making guys like me look like fumbling buffoons (or could it be that I just am a fumbling buffoon….?).  I clearly lost the battle and the war, and that’s okay. Failure at the big guys notwithstanding, there were fortunately some smaller schooling bones that frequented a couple spots around the caye if it wasn’t too busy with day-snorkelers, and I did manage a few of those to hand to salvage at least a modicum of self-respect. 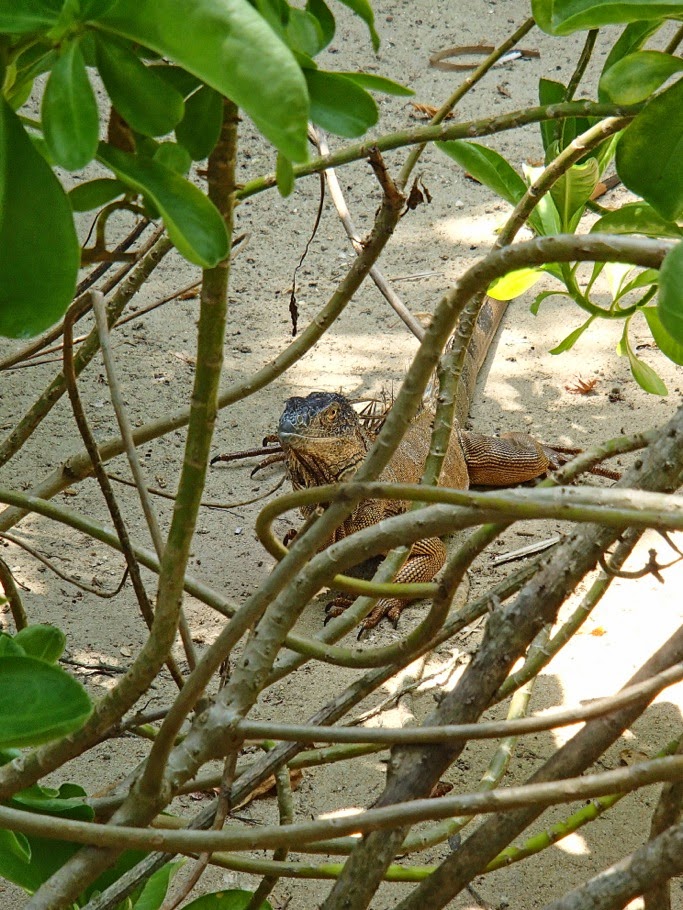 I also had one day with Daniel Cabral to chase permit. Quite a learning experience and Daniel was great, even if not impressed by my thumb position during the cast. Of course, as luck would have it, the tides were about as wrong as I could get with high at ~3:30 AM and again ~3:30 PM, and moving in and out quicker than I’ve experienced before on the flats. This left about a 1 1/2 hour window on either side of the high in the afternoon to make the play. So we spent some time early in the day catching small bones from schools waiting for things to get right. Later in the afternoon, they did get right and we had about an hour and a half on one flat where I saw and cast to more tailing permit than I would have dreamed possible. I blew lots of shots due to permit fever, but also got quite a few right where they needed to be, but permit be permit, mon…no singing from the Lamson and after such refusals Daniel and I got to practice our creativity with leveling profanities in the direction of their wakes. 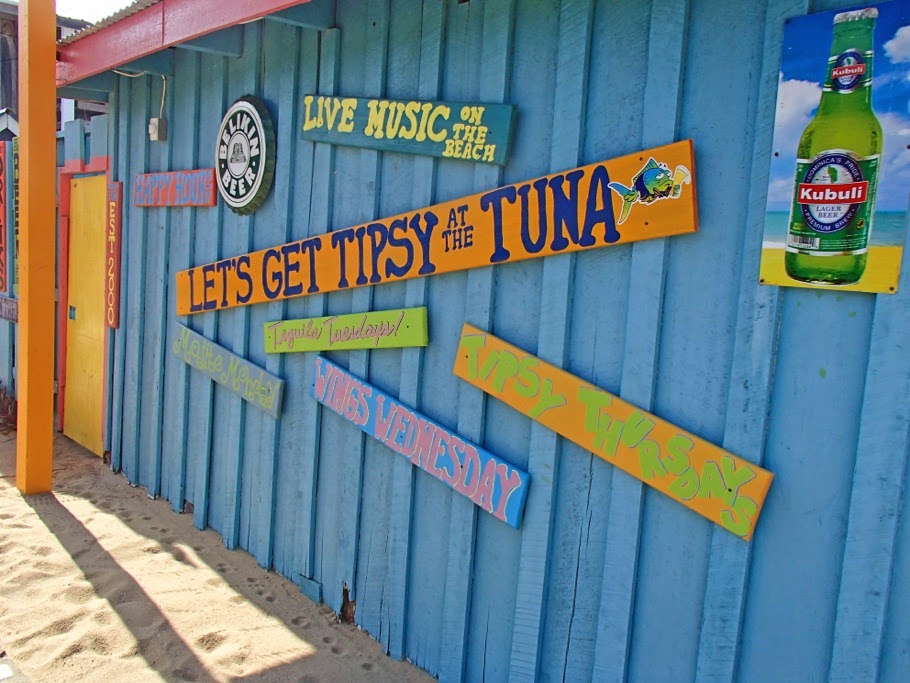 I was going to fish a second day, but the ride between Placencia and the permit flats is as long and rough as advertised, the high tide was now at ~4:30 (about the time the sun was getting low enough we needed to start heading back in), and I wasn’t too interested in spending the majority of the day on little bones. While Daniel could be considered by some as a handsome man and was an eminently capable guide, there was nothing he could do about the tides, and a golf cart ride into the village to shop and have a few rum beverages with Sara seemed a far more attractive option. We actually enjoyed a few of same with Daniel so I could give him several of the crab flies I came up with and he had been lusting after, and for which we discussed some design variations (a topic I intend to send a different note about). It also just so happened that this had a positive effect on the romantic aspects of the trip, and if that weren’t enough I scored the coolest damn bonefish painting I’ve ever seen. A bit abstract in bright tropical colors, hand-painted original by a local artisan on canvas, and serendipitously enough, entitled “Ranguana” – a way-cool momento of a magnificent honeymoon. 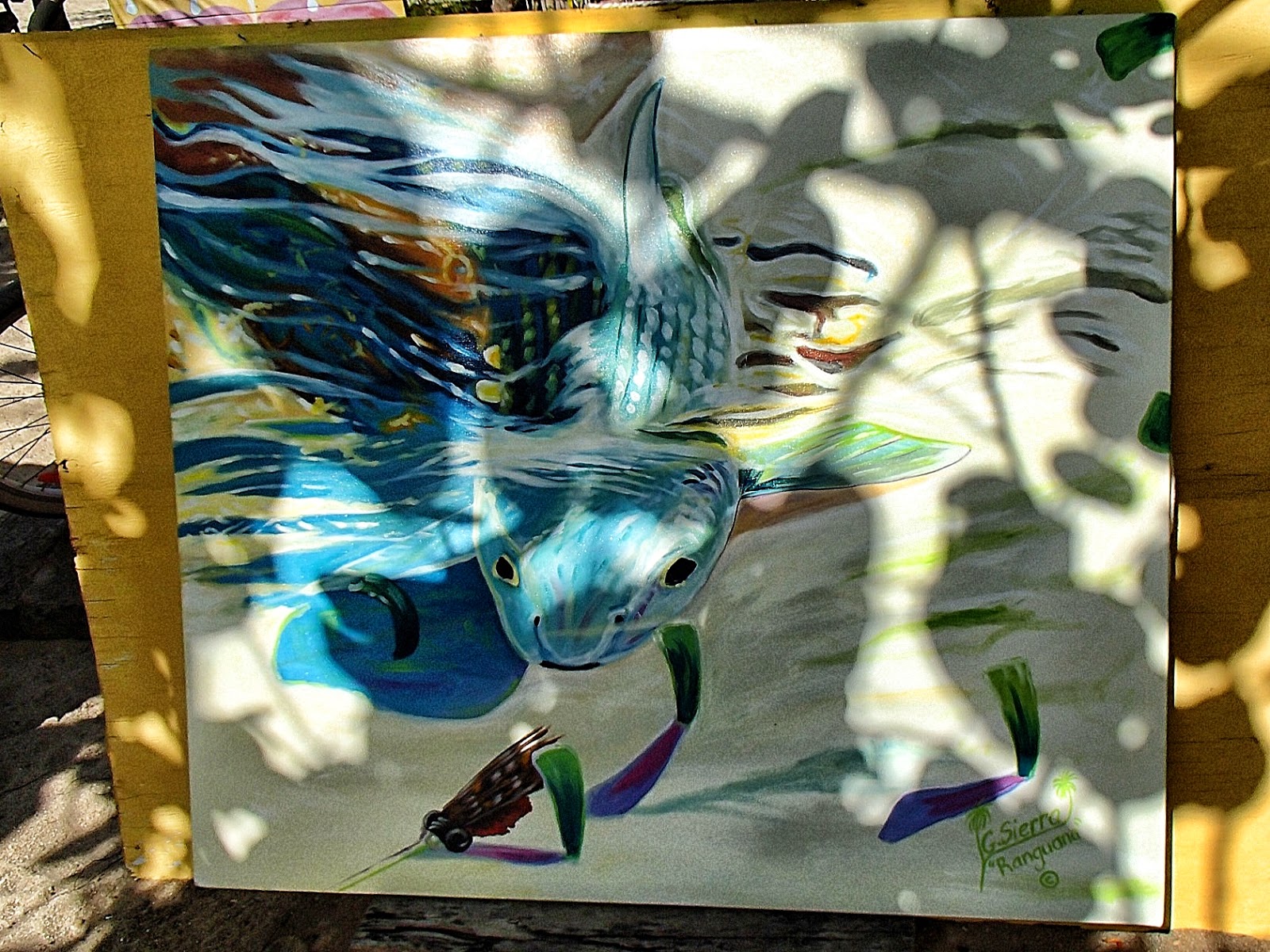 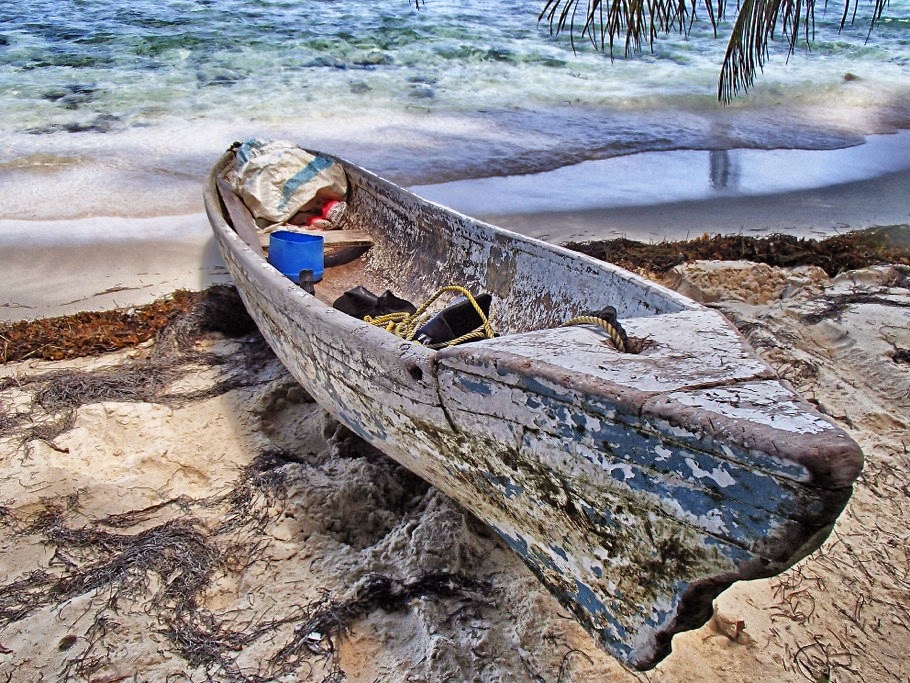 There are trips where the fishing takes front and center, and trips where it doesn’t …I wouldn’t have it any other way! And as I mentioned at the beginning, the other stuff was really what this trip was all about, the fishing just a gift and secondary to spending time with my beautiful wife whom I am so very fortunate understands and supports my passion for “international angling”.  What an awesome 10 days!
Preview of coming attractions - let’s stay in touch about some November plans for a trip that does involve fishing front and center, and be prepared to assist for putting something together for me and Marley (daughter #3 of 4 in order of age) for next spring!
Best,
Jeff