Last Saturday morning, August 2, I reunited in Anchorage with the same group (with a few notable additions) that explored the Upper River in 2012. We were soon on the short flight to the small village of Bethel. Under a very low ceiling, we finally saw the strip at 300' forewarning us that we might be delayed on our next flight to the Yupik village of Quinhagak. Here, we would meet the guides and be ushered upriver in the skiffs. 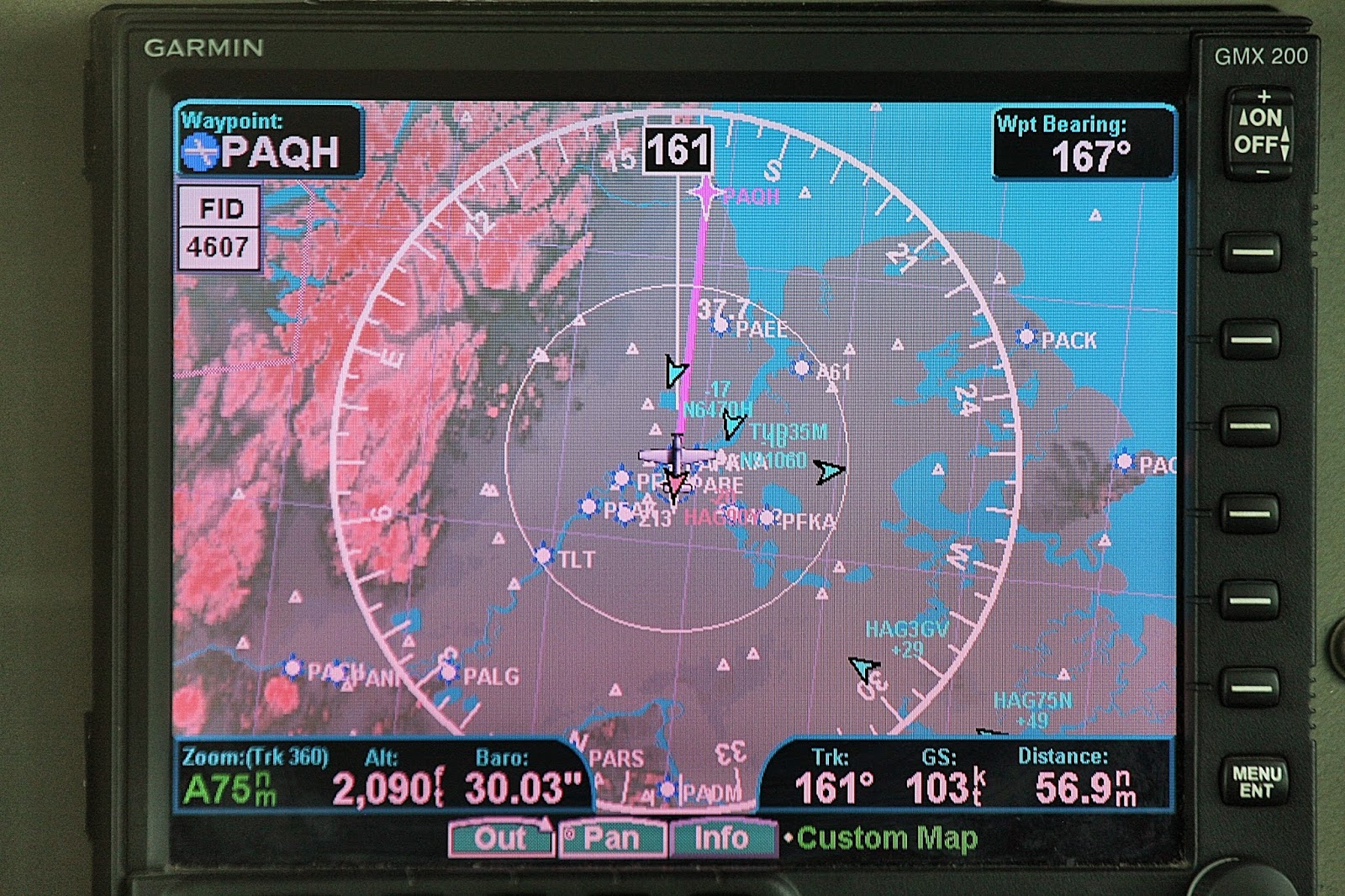 Many of the flights to the other small villages in the northern Bristol Bay area were backed due to the weather and the RavnAir terminal was jam-packed. Along with geologists, natives in long traditional smock dresses, state police, energetic children, scientists, hippie, goths, Rastafarian and God-knows-whats, we fishermen paced about, read, ate bland Chinese takeout-on-wheels until finally, we got the call. After quickly jumping into the clouds, we plowed through the dirty skies until we reached the gravel strip at Quinhagak.  It was off to the river to stow gear and get upriver. We eventually made it to camp in time for a quick dinner, then it was off to bed. 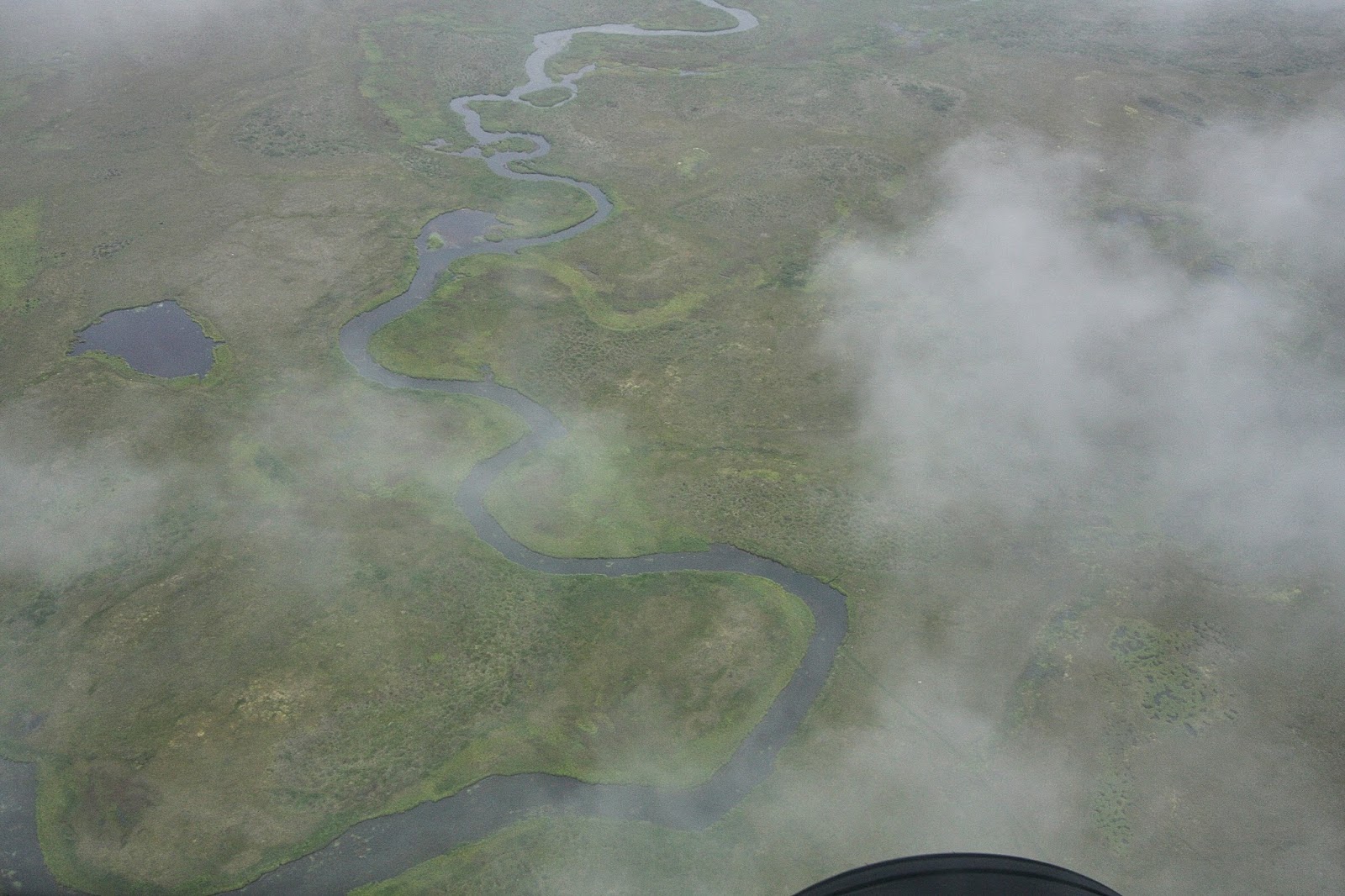 Dawn arrived not only under the same dirty skies, but also a cloud of no-see-ums. The only solution was to get to the skiffs quickly, fire up the engine and blast out of camp. Soon the no-see-ums were behind us and it was time to fish.
We rigged beads 2-3 inches above a glow bug with two #7 lead weights. If you wanted to quench your fish lust, this rig did it in short order. The best spots were found where chum (dog) salmon were on their redds. When we found spawning chum, we found dollies weaving below the paired-up chum wolfing down eggs. We caught dollies from 5-25 inches. At times, much to our dismay, we hooked a big chum. It was incredible to get a close up look at these now grotesque creatures. Especially since not so long ago these chums were sleek chrome rockets fresh from the ocean.
Drift after drift, we glutted on these dollies until it was time to make the game a bit more difficult. Billie, our guide, suggested skating a big foam fly for dollies. This proved to be as it was in 2012 productive, exciting and ultimately addicting. 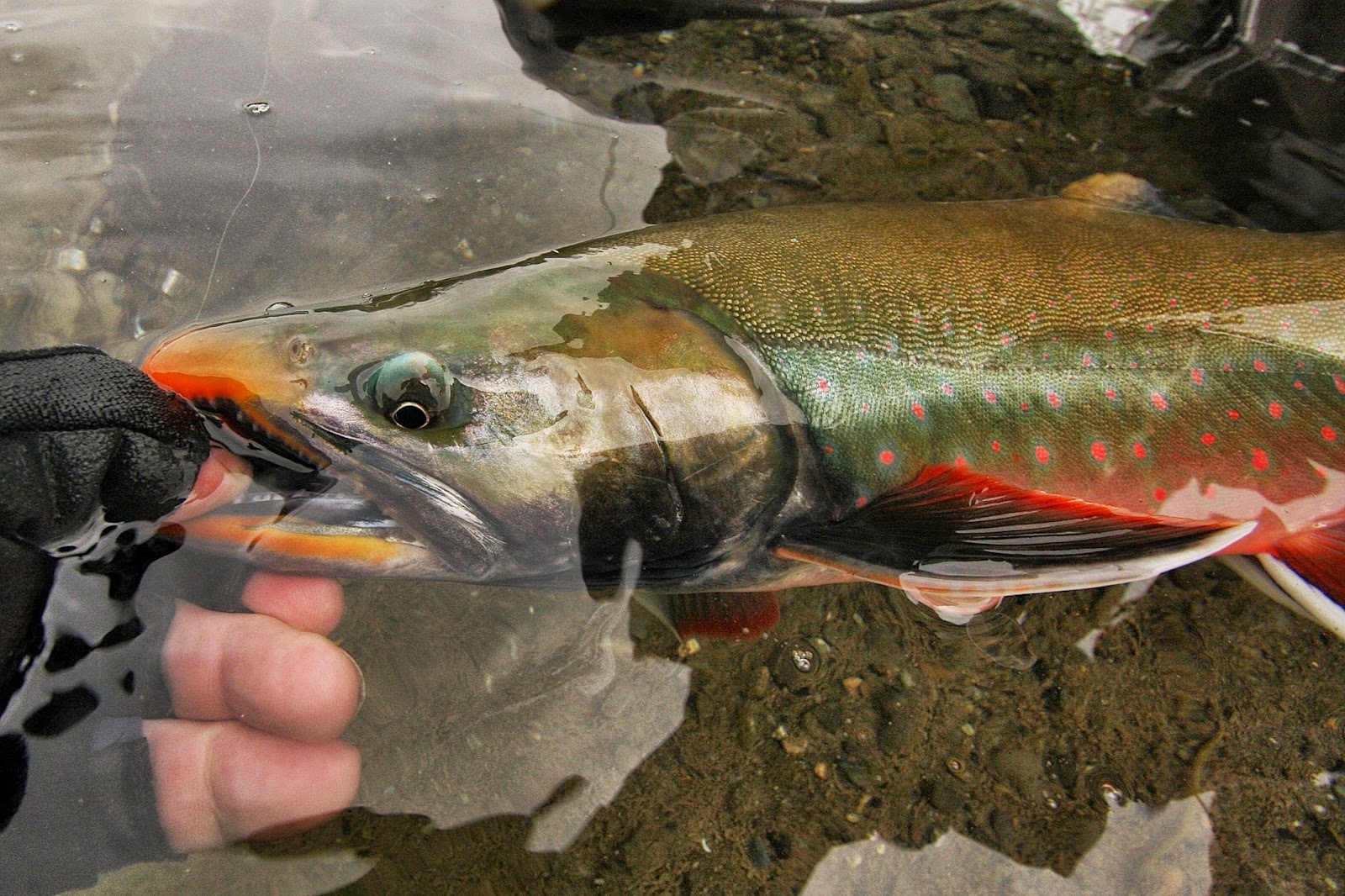 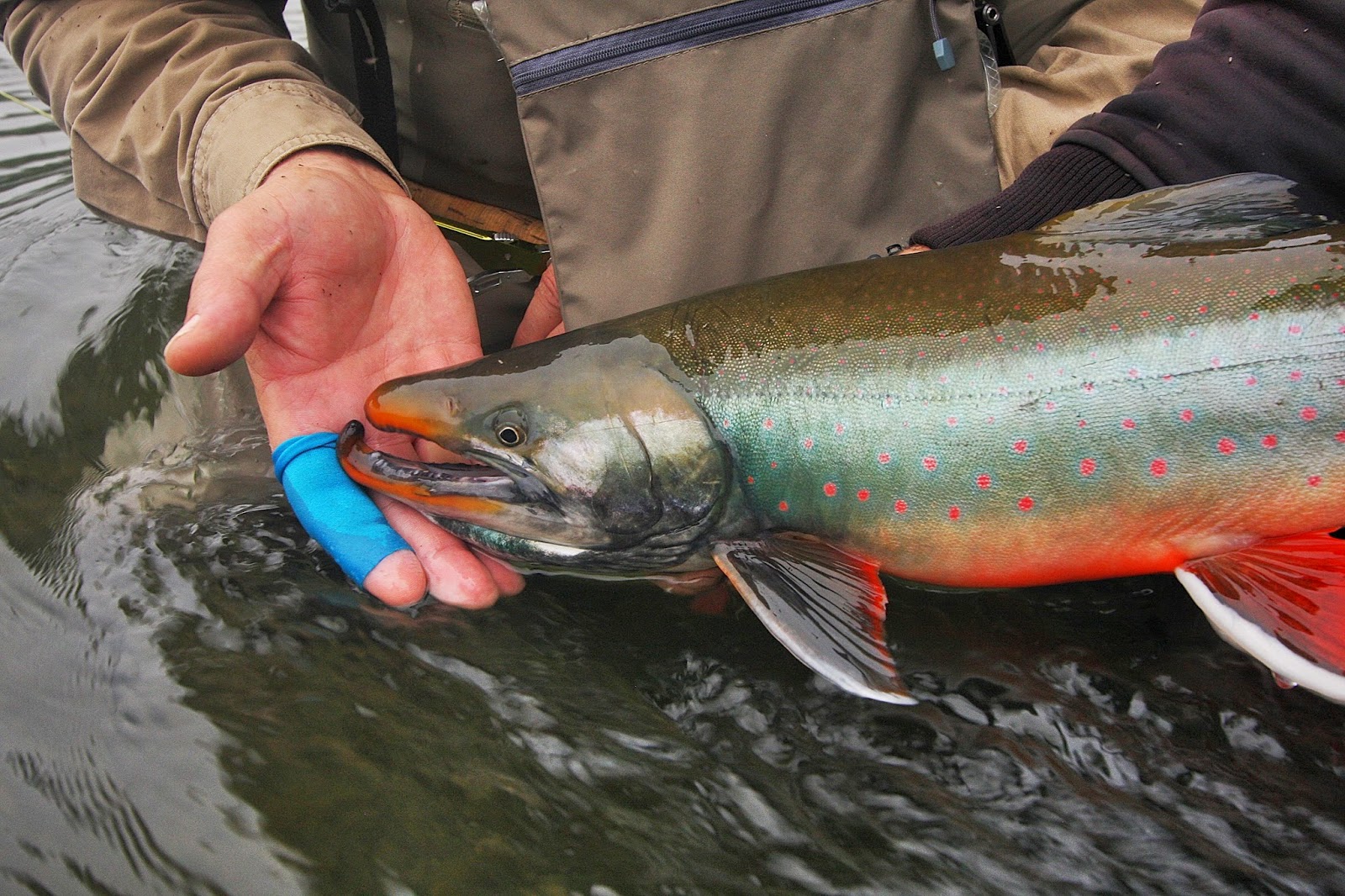 To see the orange snout of a 25 inch male dollie varden snatch your fly in the last few feet of a slick, silvery tailout is truly cool. So cool, we did it over and over until our fish count soared into the stratosphere and it was, once again, time to make the game more difficult. 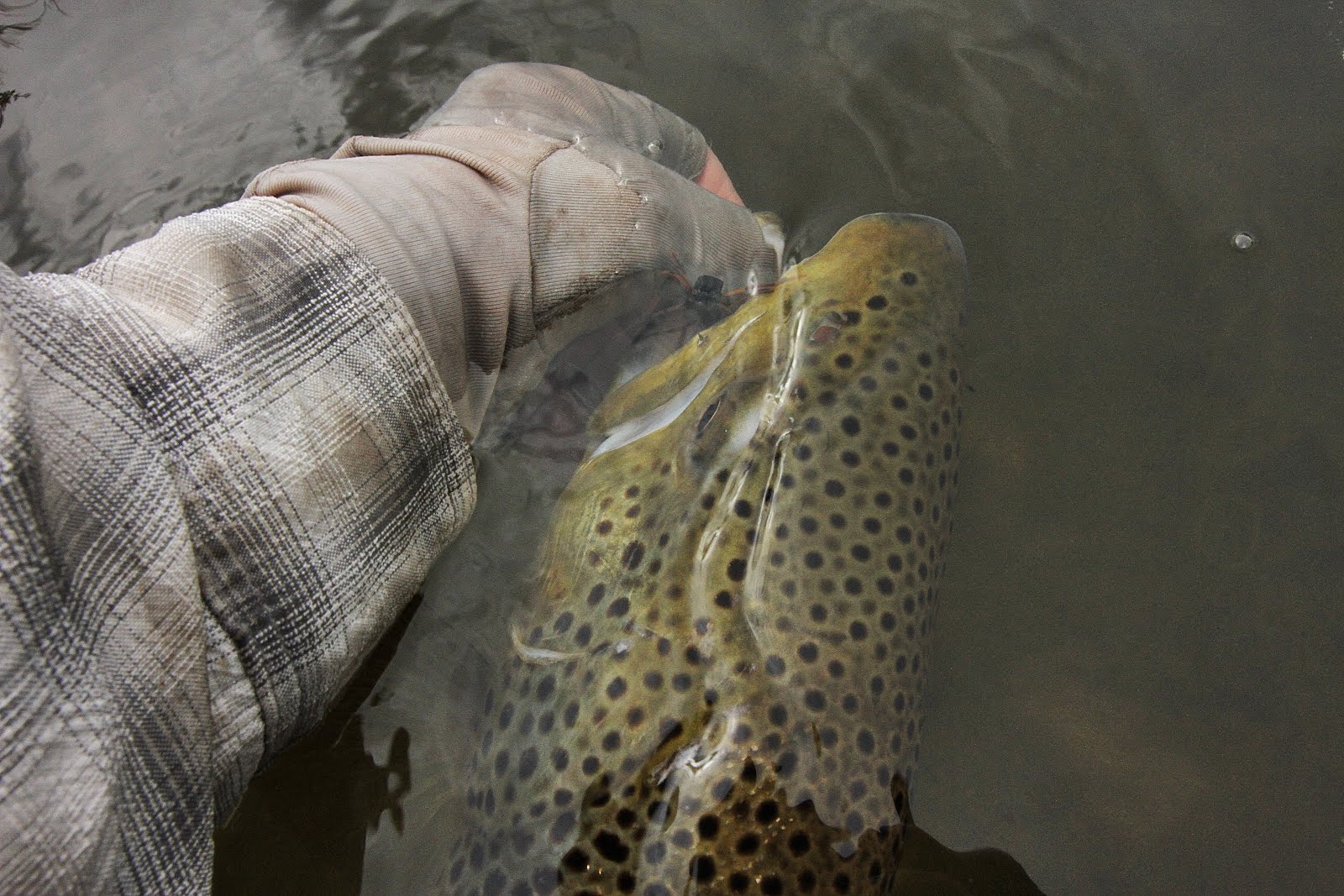 It was then that I decided to mouse for big leopard rainbows. Mousing done properly is a very active sport especially when done while drifting. Hit that seam on the right, try the pour-over on the left, quick cast to the root ball in the middle, then try to reach the ledge on the right. If a big 'bow attacks your mouse, it's game on. But if it's "a hit and a miss" it's quickly back in to the same spot. Often the rainbow will take on the second or third try. It is remarkable how well they track down your mouse if it's in the area. I had one 22 inch bow grab my mouse on the fourth take. He was 30 feet downstream by the time he ate! 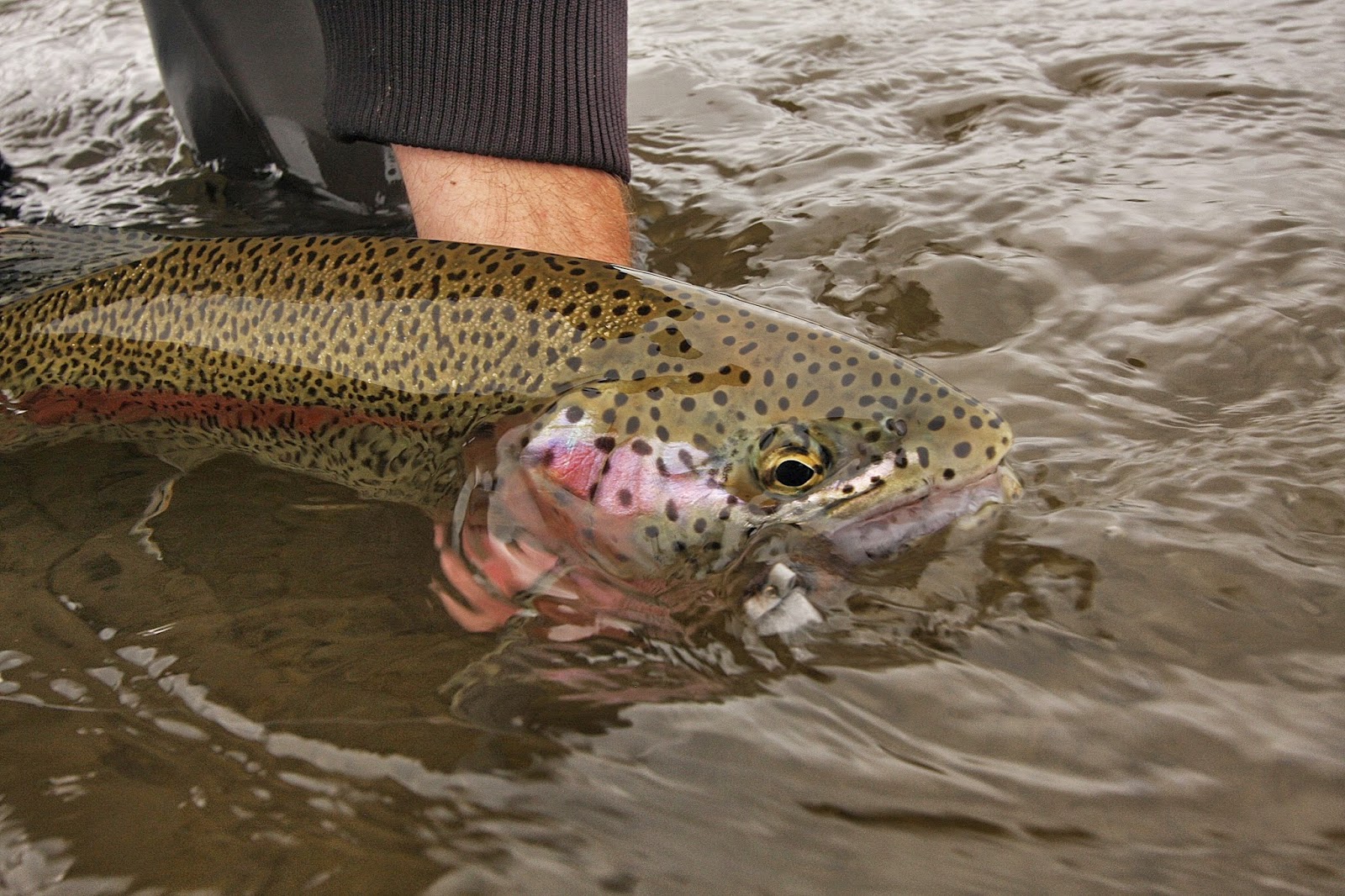 We arrived back in camp that night a tired, but very happy crew. It was a great day and we have five more left to go!