Back to top
Wednesday October 15, 2017
After we said our goodbyes to all our friends in FISH, Steve Peskoe and I jumped in Dencil's skiff, quickly crossed the Middle Bight and headed north in a light chop towards Behring Point on North Andros Island. We cut inside Big Wood Cay and soon were passing the old Bang Bang Club on Pot Cay. Here, the legendary Charlie Smith (Crazy Charlie.... ever heard of him?) lives.
Now, the dock is almost gone and the buildings are overgrown and in disrepair. Once the Bang Bang Club hosted presidents, dignitaries and fishing legends such as Joe Brooks and Ted Williams. Now, it's only a sad reminder of its past glories in the 50's and 60's.
After passing the Bang Bang Club, we veered left towards Behring Point soon passing a big school of dolphins. The larger males were aggressively pursuing the females rolling against them obviously in a romantic mood. We played voyeur for a few minutes then quickly made our way to Cargill Creek where we were to meet our taxi. We said goodbye to Dencil, jumped in Reverend Newton Hamilton's van and began the trip towards North Andros and the Joulter Cays. 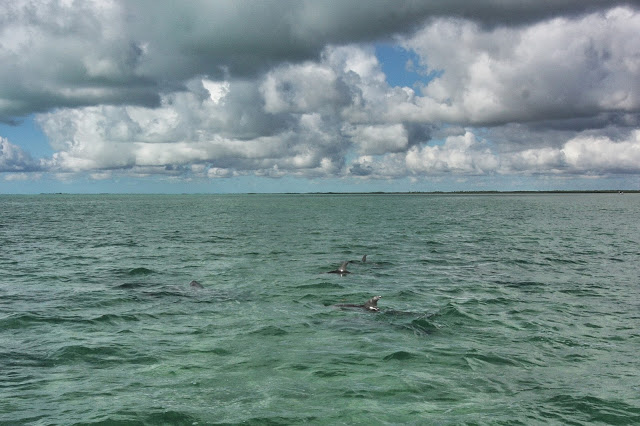 After about an hour or so of driving on rough roads, Rev. Hamilton called our host Phillip Rolle to find out where we should meet him when we entered Nichols Town. We discovered Phillip was in the car behind us so we followed him to our abode for the next few days. We dropped our gear at Phillip's lovely house, drove to the island's administration building to secure our fishing licenses, then rigged our gear and soon sat down for a lovely dinner on the porch. Tomorrow we would fish the Joulters. 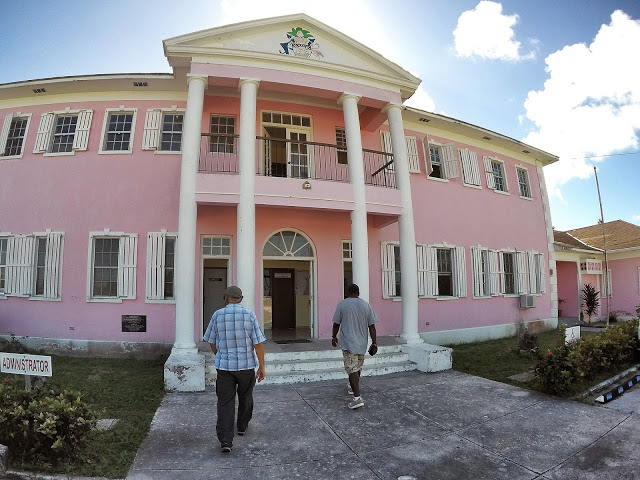 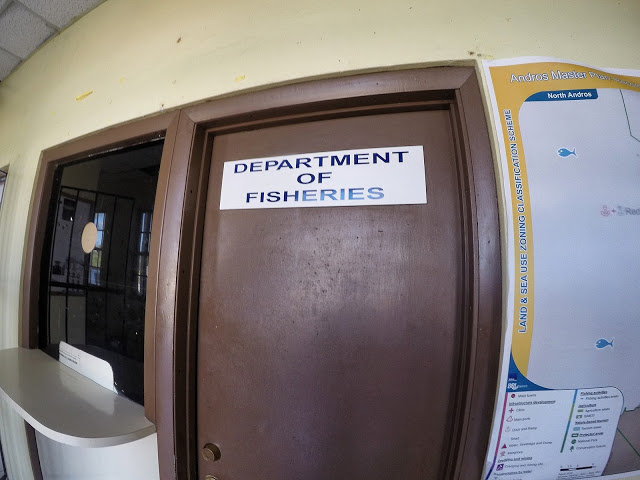 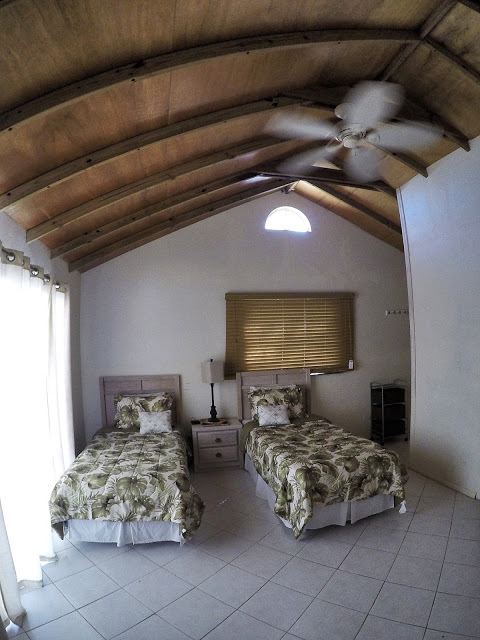 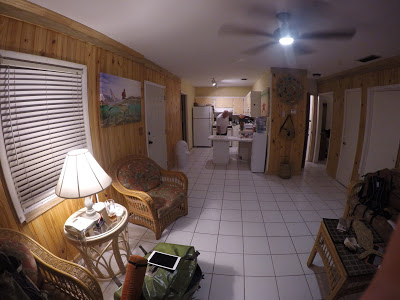 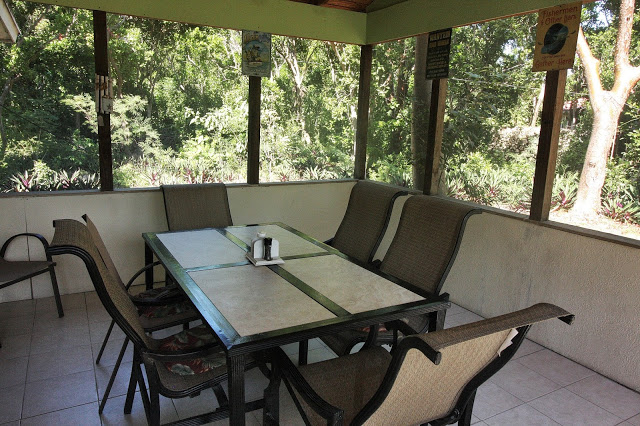 After a brief deluge at dawn, we were soon graced with sunshine and it wasn't long before Phillip dropped the skiff off the trailer and into Lowe Sound. The tide was up and so was the wind. Apparently, wind was to be the theme of this trip... so it goes sometimes. We ignored the winds and blithefully went off to find some fish. 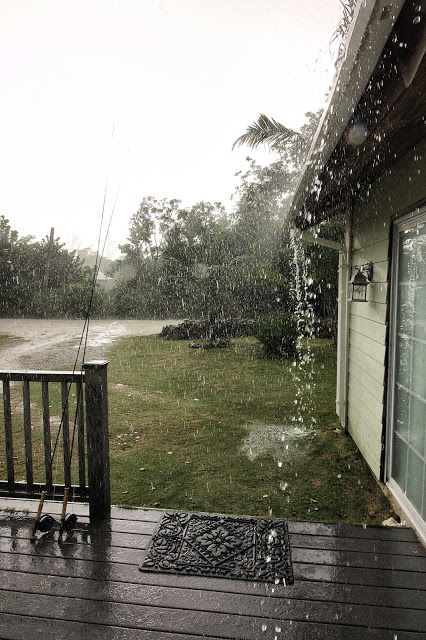 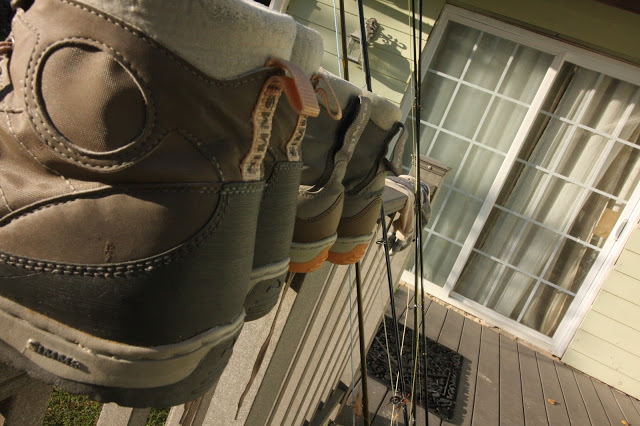 We fished in the creeks while the tide was high. As the water began to began to fall, we moved to the Joulters Cays and the classic white sand flats found there. Despite the cool temps and 20-25 knot winds, our fishing was simply sensational, if not a bit challenging. Firm, fine sand flats peppered lightly with turtle grass stretched seemingly to the horizon. Small cays and bars, laced with azure, turquoise and pale olive channels, dictated not only the complexities of navigating, but also of finding fish. We knew this is where bonefish live... now we just had to find them. It was like walking into an elegant castle. You know someone is home, but where might they be.
While Steve waded off with Phillip, my strategy was to look for structure: a channel, a sand bar or a depression in the flat... something for the bonefish to key off of in their navigations and retreat to if danger was imminent.  My plan garnered almost immediate results. I saw fish after fish and even caught a few. I must admit, the seeing was a lot easier than the catching. The wind grabbed many of my casts putting me off target or at times hurled my leader back at me presenting my fly well short of the fish. I had to concentrate on my casting technique and exaggerate my second haul. If I did everything right, I was often rewarded with a tug that took me well into my backing. We finished off the day wading a skinny flat finding tailing fish in the pale afternoon light.
....Beautiful! 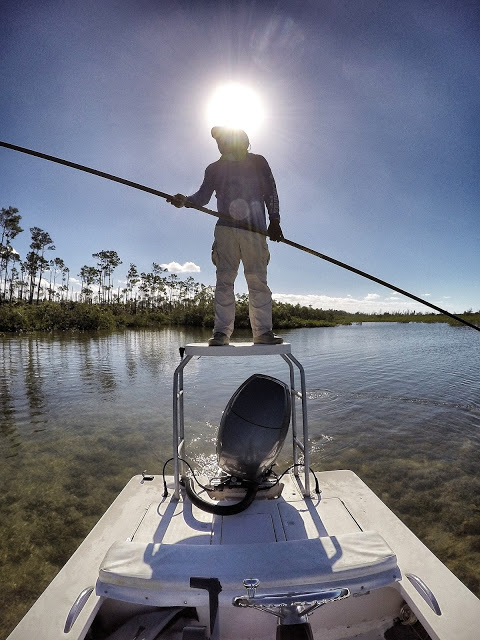 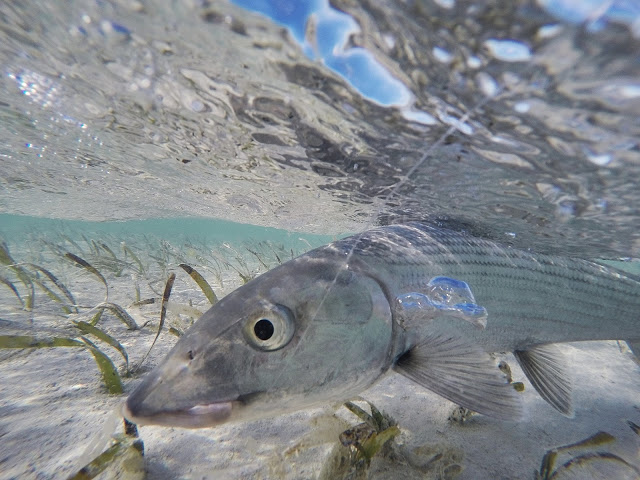 On Day 2, the wind was even stronger, the tide bigger and the fish more spooky. Our morning was tough, but after the tide began to drop and we exited the creeks and went to the Joulters. There things quickly picked up.
Again fishing solo, I headed to a long bar that was getting bigger as the tide fell. I waded in until I found that sweet spot where the depth and the distance off off the bar seemed right. Then, I slowed way down barely shuffling as I concentrated my vision on the narrow window the sun and wind offered. This is my favorite type of bonefishing. Challenging conditions, very shallow water, but always the promise of fish. I had a few tailing fish, but most of the fish were seen subsurface and I was hooked up often enough to label this session terrific. To put a period on our last day, we motored through a series of complex channels to a promising looking spot. I wrote that night after packing up for our departure...
The last hour of our trip was wonderful. The sun was low and half hidden by dusky ribbons of clouds. I was wading towards a sand bar that appeared to have a deeper slot right off shore. Phillip and Steve were a couple hundred yards off to my right and obviously into fish. I could see Steve casting and Phillip pointing.
"Great!" I thought knowing Steve was happy and we would be here awhile.
I wanted one good moment to end this great week. One tail, one good cast, one well done strip and set, one hookup... one more and I'd go home happy man. Hell, I was already going home a happy man, I was just looking for some gravy for my mashed potatoes.
When I got fairly close to the bar, I stopped. Suddenly I thought, "This is the right slot."
It was the right depth. It was somewhat shaded from the wind with the tide flowing out in same direction as the wind. Any fish would be headed my way. I needed to proceed slowly. I focused looking closely for any slight sign on this wind scoured surface. Soon my head was jerked left as a solid bone did a headstand. This was not the subtle sign I expected. This fish was waving a hello begging me to come on over. In the afternoon light his tail was backlit and seemed to glow. He rooted on his nose a few exhilarating moments, then dropped down below the riffled surface.
I made a long cast tossing the line with the wind. The fly landed ten feet upwind and uptide... the direction he was heading. I let it sit and waited. It wasn't long before I saw a small shudder. I barely bumped my fly. The fish tailed and I made a long slow strip. My line came tight and the fish blasted off downwind and into the setting sun. The bone threw a massive splashy rooster tail for 75 yards that sparkled as if ignited by the low light. It was a magical moment.
I blew up Steve and Phillip's fish as I tried hard to stop his run. I yelled "Sorry", but I don't think they heard me with all the wind. Soon he gave up and I reeled him in, unhooked and then thanked him for this perfect conclusion to a great trip.
Thanks Phillip and Betsy for two great days! Thanks to Steve for a wonderful week on Andros!