Back to top
I am often asked the following question... usually by quite experienced anglers, "If I want to catch a permit, where should I go and how should I go about it?" 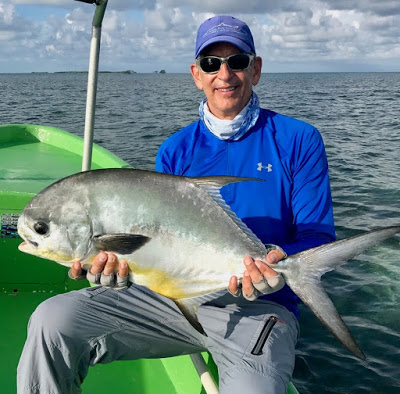 Good question! There are many choices: Mexico in Ascension Bay, Espiritu Santo Bay or Chetumal Bay, Belize in the south or in Northern Belize at Ambergris Cay, or in the Bahamas at Crooked or Inagua Islands...or Cuba if you're really adventuresome. But the truth is, if you want to catch a permit, you first of all need to dedicate yourself to the process. Permit fishing is not a sidelight species as they are rarely found where bonefish and tarpon are found. Permit are rarely caught serendipitously. As one of my permit fanatic friends says "the juice has to be worth the squeeze... but you gotta squeeze the juice!"
So if the best way to catch a permit is absolutely to commit, what can you expect from a dedicated permit trip if you do "go for it". Let's explore this question by looking at one of the best permit trips in the world and see if the obligatory frustration and dedication required dissuades you in any way. If one of the best permit trips in the world requires too much commitment from you, then should probably include the pursuit of other species into your trip itinerary. Maybe only plan to give permit a try for only one or two days.

I think one of the best "dedicated" permit trips is aboard the Rising Tide in Belize. This live aboard yacht explores some of the finest permit flats on the globe which begin about 15 miles SE of Belize City and extend south from there for about 25 miles. The only practical way to access these outstanding flats is via a mothership... and we suggest the Rising Tide. But what makes this area so special?

-First of all, the resident population of permit allows for more shots at tailing fish than almost anywhere we know.
-Secondly, seldom do anglers fishing this area from the Rising Tide encounter another angler. That is because they are far enough away from the lodges and therefore these flats receive little pressure.
It should be noted that these waters ARE permit waters; there are very few opportunities for bones or tarpon although some areas at times have schools of tarpon. There are “variety” Rising Tide agendas which fish other areas, but this particular trip should be considered a dedicated permit trip. As such, heading into this area should only be pursued by those experienced salt water fly fishers who understand how frustrating and exciting permit fishing can be.
This is an area that some of the most successful permit fisherman come back to time and time again. If you've chalked up double digit numbers of permit, you've no doubt not only heard of this area, but also probably fished southern Belize. For dedicated permit trips, consider building around a full or new moon because even though the tides in  only move inches of water (not feet) a few inches of water can make a difference on the shallow flats fished on this itinerary,.
Here then is a trip report by Art Hinckley and two of his angling friends who have, for many years, taken two trips on the Rising Tide every year. Art has released over 120 permit. Art keeps a daily dairy of their trips. The attached report from his most recent trip in September will give anglers who understand permit fishing a sense of the flow of the fishing. On this trip, they released 11 permit. They do two trips a year, usually for 8 – 10 days and all they do is fish permit. Art and Dennis have taken over 170 permit between them – Chuck is new at permit and now has six from his two trips. For them, releasing 11 permit is a fairly average trip. Their record trip is 23 fish. 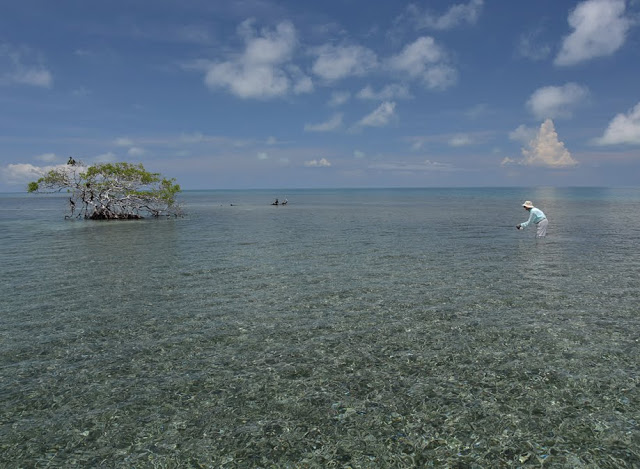 Journal by Art Hinckley
Arrival day - We landed at noon and headed out to Robinson in the pangas about 1:45. We didn't see much there so Dean took The Rising Tide to Bluefield. Chuck got a couple shots, but that was it.

So if this works for you, by all means let me know and we'll find you some appropriate dates. If a "dedicated permit" trip looks like a little too much and you would still like to do the Rising Tide in Belize... just not a dedicated permit trip, then let's talk. Lots of other itineraries available which include bonefish, tarpon, snook and yes, maybe even a few shots a permit!
scott@anglingdestinations.com
800-211-8530