Back to top
At the conclusion of our trip to Cuba's Jardines de la Reina, there were so many good stories I told everyone that wanted to to write up their favorites to please do so. If they did, I would post them. So here is the first story on Fred Abramowitz's Grand Slam as told by Doug Jeffries (photos by Doug too!)...
Pressure is most often defined as a force exerted on an object by something else in contact with that object.  A secondary definition is the use of persuasion, influence, or intimidation to make someone do something.  Fred certainly did not need any additional pressure but Coki and I did our best to apply all three of those tools to help him catch a grand slam one evening.  The story goes like this…
This day Fred (and Jay I think) fished with the irascible, sometimes volatile Coki.  Those of us fortunate enough to fish with Coki quickly learned three things about him.  First, there is no half-way with Coki.  He never steps onto his skiff with the intention of simply going through the motions and he expects the same level of intensity from his clients – and the fish and the clouds and the sun and the wind for that matter.  The fact he has very little influence on those things doesn’t stop him from trying.  Second, his passion sometimes acts like a belt sander on what some consider normal societal interaction, but underneath it he has a really funny sense of humor.  And third he loves to fish for permit.  One could debate which of those traits came first, but in my opinion good permit guides have all three of those characteristics in spades.  Tell Coki you want to fish for permit and his face lights up.  You can almost feel the energy coming off him.  It’s like when you hold up a left over steak bone and ask your dog if he wants it.
So Fred fished with Coki and lo and behold lands a permit.  I wasn’t there so Fred will have to tell that part of the story.  Fred also landed a bonefish but as happy hour rolled around he was still short of boating a tarpon to claim a flats slam.  In Coki’s world that just cannot be so he told Fred he would bring his skiff over just as the sun reached the tops of the mangroves and they’d go finish the slam.  I don’t think Fred had a say in the matter.  I volunteered to tag along as official recorder and photographer. 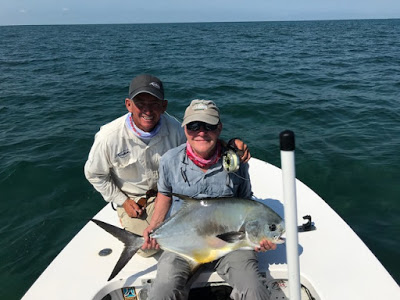 True to his word, just before the first shadows reached the Tortuga, Coki motored up in his skiff, grabbed Fred’s rod, and off we went.  He steered out the southeastern access and turned north into a small mangrove creek.  Coki changed Fred’s fly, climbed up onto the poling platform and said cast next to the mangrove.  There was a deep hole along the mangrove and Coki said tarpon usually hung out there.  He also let slip that snook sometimes are caught there and that introduced the slight possibility of a super slam.  Remember that definition of pressure we started with?  Fred’s starting to feel a little now, but nothing an ultra-marathoner can’t handle.  He makes a half dozen casts, some landing where Coki wants, some not.  The latter becomes fuel for Coki to critique Fred’s casting style – something about sidearm noodle tossing.  No barnacles grow under Coki’s skiff and within a dozen casts he says “Not here, we move.”
Barely waiting for Fred to wind in his line, Coki is off the platform, latches down his push pole, and fires up the outboard.  We chatter across a narrow channel and swing north again into another mangrove creek.  This one is much narrower with some twists and turns and overhanging mangroves. Not easy casting but doable.  The sun was now just dropping below the horizon and the creek was in shadow.  As Coki retrieved his push pole a tarpon rolled far up the creek.  There’s fish here, the pressure builds a little more.  Just as Coki positions the skiff for Fred to make a cast, right next to the boat a 50 – 60lb tarpon rolls.  Hooking a fish that size in a narrow mangrove creek is a recipe for a great story with little chance of success.  It might have been at this point I introduced the baseball metaphor and told Fred is was the bottom of the ninth, game tied, two outs, bases loaded.  I figured Fred performs better under pressure so adding a little would work to his advantage. 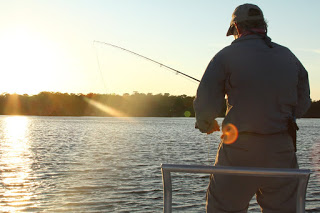 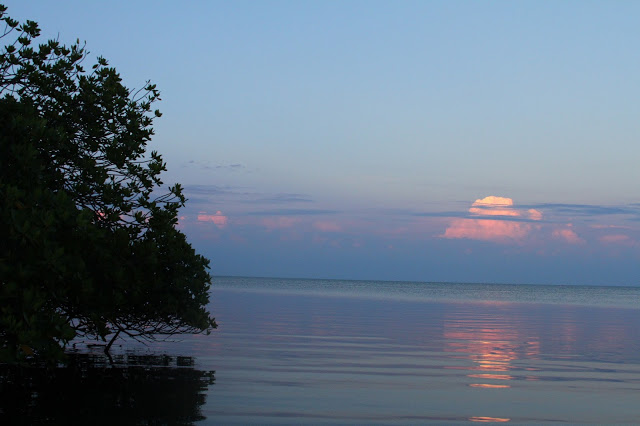 In narrow mangrove creeks like this, tarpon move up and down.  They’ll often come down to investigate the commotion of the skiff entering the creek and that’s the fisherman’s first chance.  Sometimes it’s the only chance.  Fred made a few casts and had a fish try to eat his fly.  The fish missed it and Coki said “Cast again.  More line.”  I said “Strike one.”
Fred cast again and once again the tarpon grabbed his fly.  This time the tarpon stayed connected and did its usual leaping and contorting about into the mangrove branches.  Coki and I provided superb coaching which Fred chose to completely ignore and the fish got off.  “Strike two” I smirked.  The bugs started to bite, bad, and fortunately Fred had some bug spray in his bag or the night might have been over right then. 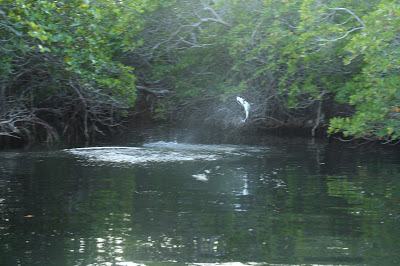 After a few select comments about keeping the line tight and not letting the fish get into the mangroves and a couple loud sighs, Coki maneuvered the skiff farther into the creek where it curved slightly right and then back to the left.  A tarpon rolled far up the creek and Coki said “He’s coming.  Cast, cast.”  With his backcast Fred catches the mangrove above Coki’s head which resulted in some more choice instruction from Coki that we weren’t fucking monkey fishing.  My contribution was “Foul ball.”  After Coki roughly yanked his fly free, Fred successfully negotiated the backcast but caught the mangroves on his forward cast.   At this Coki scampered down from his platform and taking the rod from Fred gave him some rather emphatic casting instructions to keep the rod tip straight up and down and point the rood tip at his target.  “No monkey fishing.”  I felt obligated to help Fred by adding “Take a deep breath, slow down, and don’t screw it up again because it’s almost dark.  And you have two strikes against you.”
Fred’s next cast was a little short and Coki said “More line.”  The tarpon rolled again, closer this time.  Fred laid his next cast well up into the creek and began short, rapid strips.  A bulge appeared behind the fly, Coki yelled “Set the hook”, Fred kept stripping and suddenly had the tarpon hooked.  Bedlam once again enveloped the skiff, Fred trying to get control of his line and the tarpon, Coki jumping down off his platform yelling “Strip the line, no reel.  Keep it away from the bushes.”  All I could do was laugh.  The fish went right, Coki yelled “Pull left, left.”  The fish came toward the boat Coki yelled “Strip the line, strip the line.”  The fish jumped thrashing some of the overhanging mangroves.  Coki is now standing right next to Fred, willing Fred to horse that tarpon close enough that he could touch the leader.  And then it’s over.  Fred lifts his rod tip, the leader comes within reach and Coki grabs it.  “Yeah” he yells, “That’s your slam.” 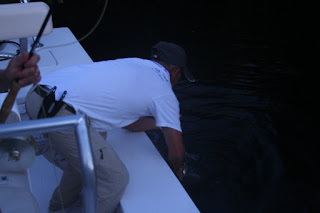 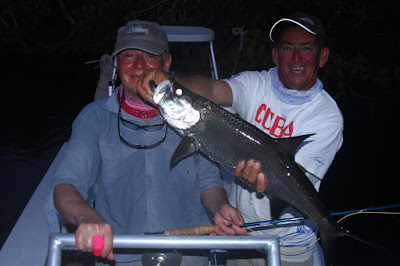 I don’t know who was feeling more pressure.  I certainly felt it.  I wanted Fred to get his slam.  I wanted Coki to be able to record another slam on his resume.  Hell, I wanted just to witness the slam.  The funny thing about pressure is that when it’s released, it feels so good.  We high-fived, congratulated each other, and mostly laughed.  Then we motored back to the Tortuga where the rest of the gang was just sitting down to dinner.  We tried to play it out and act like it didn’t happen but in the end couldn’t help it and told the story over and over.  It was one of the most intense half hours of fishing I have ever experienced.  Thanks to Fred and Coki.