Back to top
What follows is an entertaining and very instructional story written by Jeff Rodenberg. I can't say how much I admire Jeff's willingness to take constructional criticism. It takes guts and a willingness to swallow a bit of ego to watch a BIG permit eat your fly and then listen to the reasons why you didn't get hooked up. I can't wait for Jeff to get another opportunity. I know he'll nail it next time. (I'll be posting his second story from Cuba in a couple days and you'll see, he really learned from the day he describes below.)

Star-date Thursday, 12 April 2018:
Phi Slamma Jamma Grad-school!
by Jeff Rodenberg
Once again, please allow me the courtesy of setting the stage.... About every 3-4 years, I get to do a saltwater trip. I get the opportunity to bask in the magnificence that is Doug, Doc, Scott and many others, so am inevitably the guy with just about the least experience. I love it! What a chance to learn! In between those times, I fish the sweet-water of the upper Midwest for muskies, or smallmouth, or carp...
So consider this my friends, on an average day, you will find me with guides Eric or Brad, lobbing hamster-sized, wind resistant hairy things on Lake St. Clair or a river in NC Wisconsin, with a heavy sink-tip line. Now this has done some wonderful things for my bachelor’s degree in casting ability. In order to accomplish any sort of cast in that situation, and be able to continue blind casting such a rig for any length of time, you damn well better develop a very relaxed casting stroke...let the rod do the work...and quite frankly, a bit of an open casting loop. When the fly plops down, the louder the better, you then stand there and admire it for a bit to allow the line and fly to get a little depth. Then you strip the puppy back. Lather, rinse, repeat...hour after hour...watching paint dry...until as if by magic this huge toothy green submarine appears nose behind the fly, not giving a damn about the boat. If you are really lucky, you have the nerve and composure to strip that fly to within a foot or two of the rod tip, then maneuver it around for a vicious, visually spectacular boatside strike that leaves you holding on for dear life. Truly intoxicating...


Efficient casting is all well and good. But whether you are talking bluegills on the pond, muskies on St Clair, or sabalo in Cuba, there is a bit more to it and to avoid confusion, I simplify things in my mind to three basics...
1.) Get the pointy thing in front of a fish
2.) Tease the kitty
3.) Fight it right...
At Saltwater grad-school a couple weeks ago in Cuba, I was given a very good and clear lesson that #2, teasing the kitty, is a different animal in the salt than my normal life.
With that as a background, after several days of moderate success on tarpon, I was pretty confident on basics 1 and 3. At dinner on Wednesday night, it was decided that on the next to the last day, I was ready for the big leagues. I would do a day with our trip-host Scott, and the most experienced and “passionate” of the guide crew we had, Senor Coki. And we would start with permit.... As I puffed on an apres-dinner Cuban Romeo Y Julieta Crema on the aft deck of the Tortuga, talking to Fred about his admittance to the 12-step program that all permit-heads eventually end up in, Scott scaled the stairs warning, “Bring you’re A-game tomorrow Jeff!”
We got in the skiff the next morning, and I was actually pretty comfortable, relaxed. I did purposely skip breakfast so I would have the lean and hungry demeanor of someone who not just wanted to hunt, but needed to hunt. We didn’t go far from the Tortuga when Coki shut down the engine and took his place on the poling platform. I urged Scott to take the deck and show me how this should be done.
And he did just that. That magnificent bastard made about 3 casts to the first permit we saw that day, hooked up, and landed a beaut like he’d been doing it all his life (which, well, he has!). This was amazing to me! I actually witnessed someone landing one of these things! It can be done and here was proof!


Now it was my turn...and I will admit the heat was getting turned up a bit. I mean, within an hour of the start of the day, there was already a permit boated. Now I needed to “bring it”...
And I will have to admit that it didn’t take Coki long to find another permit to cast at. I launched the Avalon crab, and somehow managed to get the pointy thing in front of the fish in such a manner that the fish was more than just a little interested. But here is where things went haywire...that sweetwater sloppy cast, and devil-may-care attitude in maintaining line control, took over. Every time Coki yelled “strip”, there was enough slack in the line that the fly didn’t move, and by the time I caught up with the fly, Coki would yell “stop” and the fly would move because the rod tip was above the water with the line getting caught by a small gust of wind. That permit wanted that fly more than you can imagine. And courtesy of losing any semblance of composure, of not paying enough attention to the right way to tease the permit kitty, I...just...kept...taking it away from him...DUH!!!

If your vocabulary includes recognition of Spanish curse words, you probably heard Coki’s reaction back here it the States...and I apologize . I caused it! He and Scott both wanted it so bad for me, and clearly knew that if I had just done it right...
We motored to another flat, I went to sit in the kindergarten corner and reflect on my misbehavior, while Scott got a couple more shots. Then it was back on deck for Jeff, and well, so as not to belabor this, the “time-out” didn’t work and I repeated my previous sins. I can’t help but laugh (if I don’t laugh I’ll cry, and that’s just not manly...) thinking about Coki leaping down off the platform, snatching the rod out of my hand, stripping out another 20 feet of line and pounding a perfectly straight line cast; “that’s how you do it!! You have to have control!! You have to be able to strip when I say strip!!! And stop when I say stop!!!”.
Scott even joined the party...”what’s this mamby-pamby back-cast thing!?"
(Christ...somebody just called my casting “mamby-pamby” – that got my attention insofar as I don’t understand Spanish swear-words...)
Scott continued; “Man, you got to put a little oomph in it!!! I’m not saying that you shouldn’t cast in a relaxed fashion, but punch it man!! Fish like you mean it!!”.
“Now show me you can do it!!” Scott ordered. I complied... ”much better, now remember that...”
I looked up at Coki...”Sorry dudes; you may not ever want me in your boat again, but I gotta tell you, I sure as hell would fish with you any chance I get...”. I think he and Scott might have even cracked a smile...
And then it was lunch, and after lunch, with the right  permit-tide ebbing, it was decided that we’d subsequently be going after tarpon. Step #2 in a Slam. 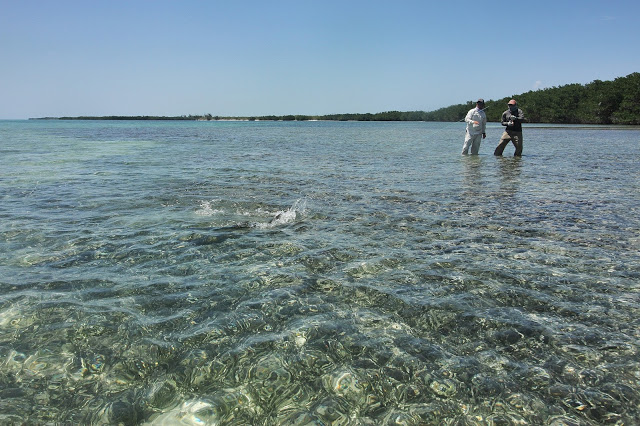 I’ll let Scott tell the tarpon part of the story, he made the most of it, I cheesed a cast. With only a bonefish left to go for Scott’s Slam, we motored to a flat for same. With Scott’s best interests in mind, and in the context of being a good partner, I allowed as to how I now saw it as my responsibility to ensure that Scott got his slam in the correct way. There would be no blind casting into a mud, and if there were, I would photograph this for posterity and send images around the globe on Facebook of Scott Heywood doing just that. To add to the fun, I allowed as to now I had him right where I wanted...all I had to do was step on the line coiled behind him and revel in the reaction as his fly did a dive bomb 25 feet short of his target . Scott didn’t flinch! - in his famously surgically precise way, he put a mantis shrimp on the nose of a properly sight-hunted fish, stripped when Coki said strip, stopped when Coki said stop, and became the third and final individual of our crew of 14 (joining Jim and Fred) in the week’s much admired Phi Slamma Jamma club. Well done sir! Very well done!! 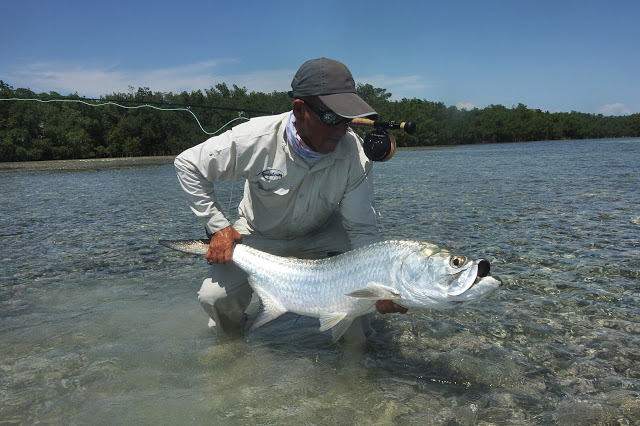 Me? I caught zilch, zero, nada, nothing, and ended the day with a big goose egg. Deservedly so, I got my ass chewed big time because I pissed away what might be my best chance ever at a slam, and the opportunity of giving Coki a double slam in his boat. While there might be some who consider this their worst day ever, I consider it one of my best days ever... Holy schnikies the stuff I learned! Watching that permit repeatedly try to eat my fly, were it not for my ineptitude and incapacity to think in that moment, is a beautiful memory that will forever cause me to wake up in a cold sweat in the middle of the night. A tarpon I clearly should have had, and thinking about if that had occurred, Scott and I could have been shoving each other around on the front deck for a shot at the bonefish and a slam. Watching and learning from a couple of chaps so damn skilled at making the most of the opportunities presented -  It seriously gets no better even if my individual performance didn’t hold up.
I really mean this, there are very few people as fortunate as I am when it comes to fly-fishing. I get the opportunity to learn from some of the best of the best, in some of the best, last, great fly-fishing venues on the planet. The Harvard’s and Yales of Saltwater Flat’s Fishing Schools! And that’s exactly what I got on this fateful Thursday off the coast of Cuba – grad school education in basic step 2 of fly-fishing; “tease the kitty!”.
So gang, in progressing toward my Master’s degree in “tease the kitty”, and in the interest of assisting my fellow anglers, I offer a few things I learned for your own next flats adventures
a.) Don’t suffer the indignity of being mamby-pamby in putting the fly out there – be relaxed, but give it enough oomph that it lands with a straight, crispy-light, immediately controllable connection to your line hand.

b.) Just stick your rod tip in the water, be done with it, and leave it there
c.) Taking into consideration the wind and boat-drift, maintain the straight, crispy-light, immediately controllable connection to the fly you established with your cast at all times
d.) Now listen to your guide – when he says strip, then strip. When he says stop, for God’s sake stop!
e.) Realize you will forget a.-d. until you’ve had several opportunities to screw the pooch; at which point just man up, see the humor in your human foibles, and resolve to spend some of your lawn casting practice time on not just distance and accuracy, but line control for teasing the kitty, all for the purpose of doing better the next time.
In retrospect, it was more than just a banner day, it was nothing other than a resounding success, and one of my best days ever on the flats, as were all days on the Tortuga!...One of my favorite trips ever....