Back to top
I guess most of us were due. Probably overdue for a good weather thumping! On our hugely successful trip to Cuba in April, we had experienced incredibly good weather... and our February trip to the Bahamas was pretty good too. When it's good you get used to it, but when it turns bad, it brings with it disappointment and frustration. In our case, Tropical storm BUD (and who the hell names a storm Bud??) was sucking moisture and wind behind it into Belize, Mexico and the Gulf States. Before we departed for Belize, our contact with the mothership we were using had told us:
"Your timing appears good…….nasty weather system south of Belize and moving north that is supposed to make things ugly through Thursday before it moves north into the Gulf of Mexico.  Hopefully, you’ll be on the heels of this system…….which can be very good." 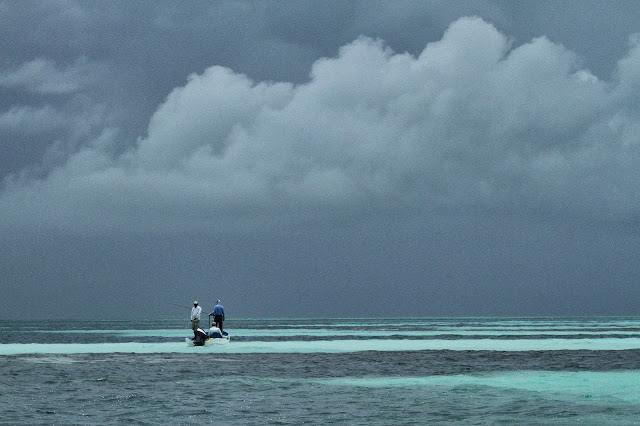 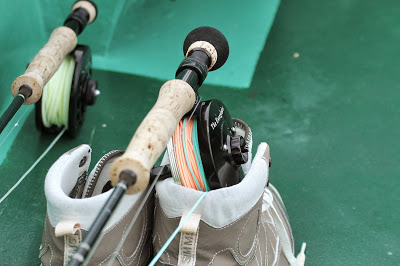 These words brought hope, a powerful and essential commodity for any angler. But, as we boarded the Rising Tide in Belize City and made the quick trip out to  Hicks Cay, the sky looked... unpromising. That night we optimistically rigged rods for both permit and tarpon. Dawn brought us an even angrier sky and stronger winds. By the afternoon of our first day, it was clear the weather was not going to improve soon. Columns of cumulonimbus paraded to the horizon and high cirrus clouds peaked though the small gaps. High cirrus, a.k.a. mare's tails, almost always predict bad weather. In the early afternoon,  we experienced a strong thunderstorm and by the time the sun set, winds were topping 20 knots.
It didn't help that we had been told by the same gentleman:
Scott,
Last week, Dean said he saw more permit than EVER near the Gallows Point Reef.  One of our regulars landed his first ever permit in the same water you will be fishing!!!! 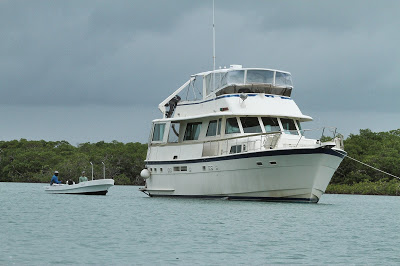 Sure... the old "shoulda been here last week". But we were an experienced and hardy crew so we perservered. We started out looking for tarpon and Jim Woollett did manage to find a big one, but was unbuttoned when the fish went a bit manic in very shallow water. For the rest of us, the tarpon were nonexistent. We all know tarpon are bitchy; they can disappear during low pressure systems. So, after giving the area a good perusal, we decided to switch gears, head south and commit to permit only.