Back to top
Our last three days were incredible... Neil Dorsey, a very experienced Alaskan angler told me as he got out of the chopper late one afternoon, "I've never caught as many 20" rainbows in one day in my life!" Maybe that statement best sums up our last three days. 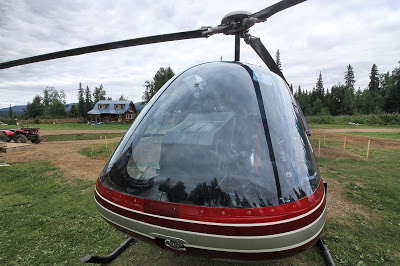 On Day 4, Anna Riggs and I were dropped off a few miles up from where Friday Creek dumps into the Talachulitna. We were with guide Scott Thomas. On this, our only rainy day, Anna and I caught numerous 'bows in the 18-22 inch range, tons of grayling, chum salmon and fresh silvers at the confluence.
Anna fished like a rock star! She fished both a Dollie Lama and a mouse and railed on fish with both.  Friday Creek was bigger down low as it collected tributary water on its journey to the Tal. This stretch was beautiful with classic runs and tailouts.
The rains never got too bad and we were seemingly always in fishy water. I even managed a 19 inch grayling which was a record for this lodge according to our guide Scott. An 18" grayling is considered a trophy in Alaska. Scott was thrilled with the catch. I just knew it was a big grayling, but didn't realize it was the biggest they had ever caught.
At the confluence, Anna gave us a lesson on how to catch silvers on a mouse. She was on fire... so much so, she finally sat down to rest after her umpteenth silver. This was a great day! 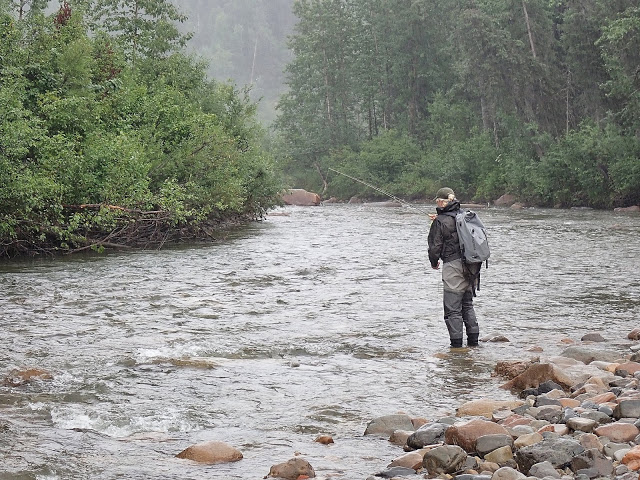 Day 6, the day of the three Scotts! Scott Sawtelle (Scotty), head guide Scott (Scooter) and I (Digger) fished another tributary of the Tal. Using these nicknames, we managed to keep our calls to each not too confusing. We had a great day together!
These beautiful streams were becoming addictive. The drill was the same, the results, as we had come to expect, spectacular. The daily drill had become: spectacular flight to a small stream, then dropped off on a gravel bar, rig rods (while the inflatable is being blown up if appropriate), start leapfrogging the runs... catch fish and by that I mean silvers, grayling and 'bows on mice, eggs and streamers. Greatfully acknowledge the good weather with no wind and beautiful blue skies. Then it was fish hard all day, enjoy another spectacular flight back to the lodge. Finally enjoy, cocktails, laughter over a great dinner and to cap it off, enjoy a beautiful walk to our cabin for some much needed rest. 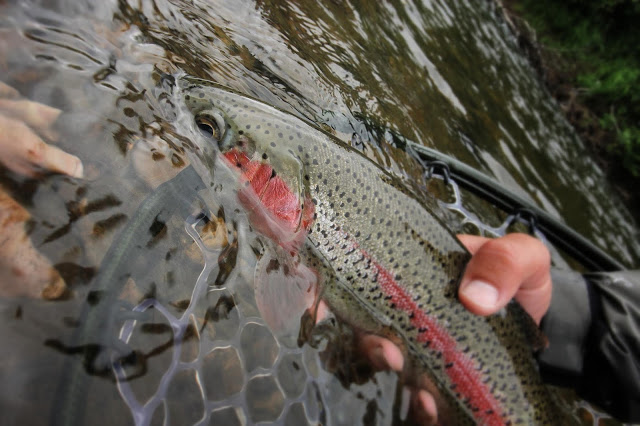 On the last day, we fished until 3:30 PM. Scott Sawtelle and I along with guide, Trevor fished a very small stream with big bows. The fish were tough, but I did mention BIG. Scott nailed a very big rainbow behind some spawning salmon and I spent at least an hour trying to get the biggest 'bow I had seen that day.
Mother Grizzly and two cubs a bit downstream from where we landed! We would later see them cross the river above us.
The bow was dogging a small group of spawning chums. I tried mice, dollie lamas and eggs to no avail. I got some looks, but no takers. Then the chums chased the rainbow until he hid under some roots upstream. His new lie made a good presentation much harder.
Then I saw this big 'bow eat a tiny caddis off the surface. I couldn't believe it. I had no caddis with me... Trevor found one smashed in his pack. It was the only one he had. we fluffed it up and gave it a try. We got a small look, but repeated attempts ended in zip. Given the rainbow's willingness to look up, I put on a small beetle and gave this fly a try.
NEXT: More photos!