Back to top
Day 4
With Scott Sawtelle... a simply great day with an old friend! We fished, laughed, caught fish, and bitched a bit about a variety of topics from politics to fishing gear. Scott ended up having a very good day. He caught quite a few big peacocks. He caught one very large paca (spotted peacock) that I really wanted to photograph.  It was a beautifully colored fish (See below). All in all this was another perfect day on the Agua Boa River. 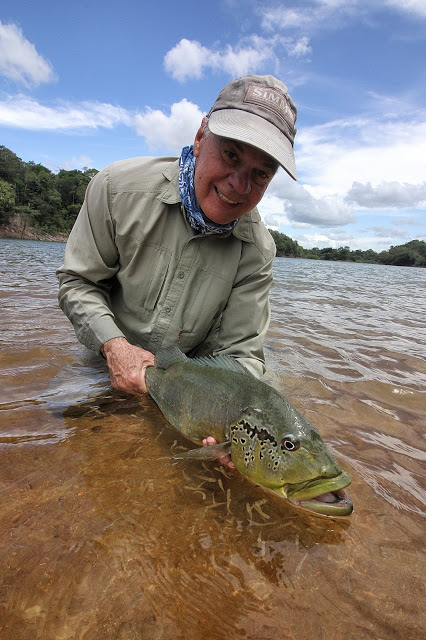 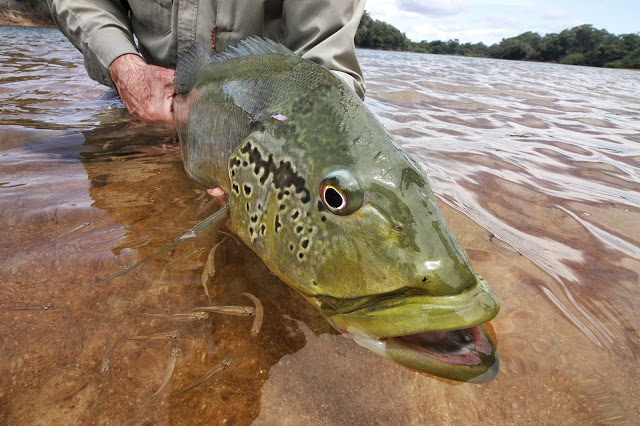 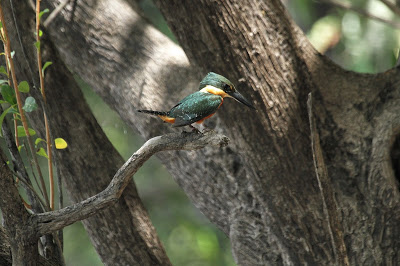 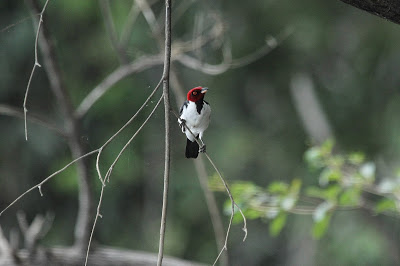 Day 5
Simply amazing... Anna Riggs and I took off with Caboclo to the first Zone upriver from the lodge. We fished two lagoons and a few sections of the main river during our day.
While we drifted about in the middle of the lagoon, I had three 5-8 lb. fish before Caboclo and Anna could change her line to a sink tip. Then Anna caught a 17.5 lb. peacock and over the course of the day, caught numerous 10-14 lb. fish. I did well too, but not as well as “Big Fish” Anna. After landing a 10 + lb. “spottie” that was stronger than any 15 lb. temensis I have ever caught. I would have been happy to end our day here, but it was only lunchtime! 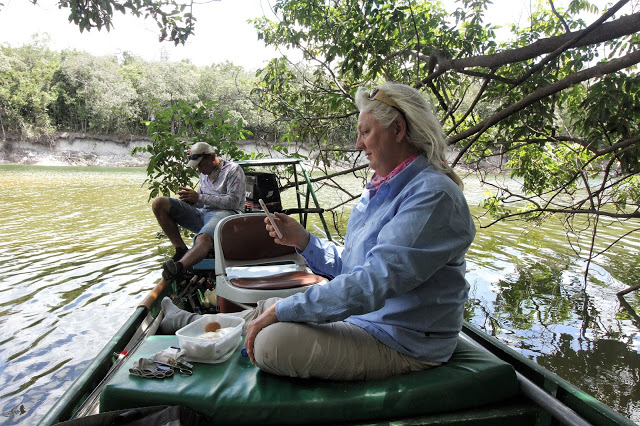 There is no better place to enjoy a bit of nourishment then under the canopy out of the heat. Here, you can sit back listen to the breeze rustle the leaves and the birds call from deep in the jungle. 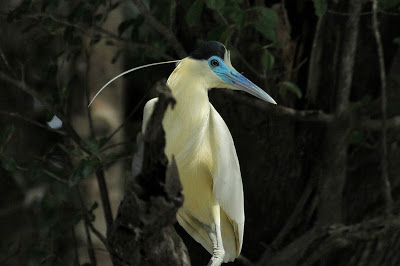 After a bit of nourishment and a bit of a nap in the cool of the canopy, we headed back out into the bright Amazonian sun. it wasn't long before I hooked what would turn out to be a 13 lb. tough guy. This brute took me into my backing on his first run with my Abel Super 8’s drag totally pegged. He then went deep into a log jam. It took a great effort to work him out and after a couple more big fish, that did it for me for the day. Anna of course caught big fish after big fish... another spectacular day! 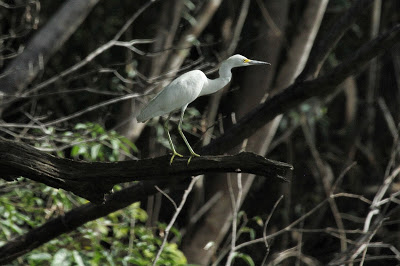 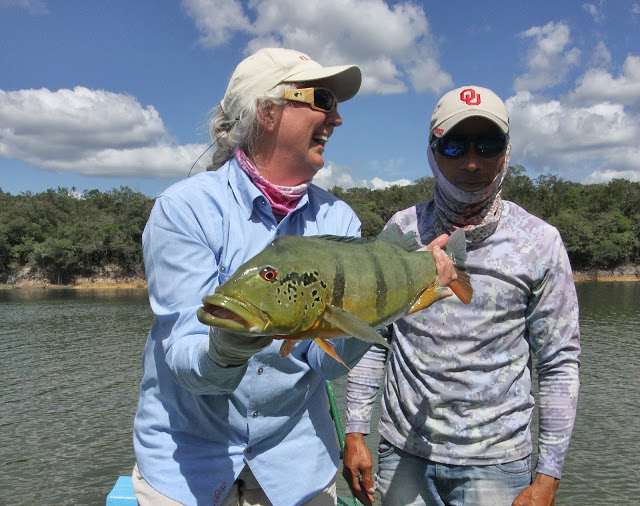 A word about the guides:
The Agua Boa Lodge guides are a talented lot from top to bottom. First of all, they are a lot better fly casters than most, if not all, of the guests. They are very dedicated and take great pride in their craft. I’ve watched many of these guys go from good to great over the last decade. They see fish very well, have a sixth sense of where to be and when. They put together a great agenda each and every day and know their areas extremely well. While personalities vary from friendly to friendly outgoing and very fun loving, their skills are at the upper end of the scale. All this means is this... listen to them. Follow their instructions, try to do what they tell you and you will be much more successful. They also know the jungle very well and always put your safety first. I personally would like to thank all of them for a great trip, your friendship and your generous and sincere efforts!


After many years of visiting the Agua Boa Lodge, I still had one thing on my agenda. With Pedro, so many years ago, I had hooked and lost an arapaima before I knew what they were. Over the years, I had cast to dozens of these huge, armor-plated monsters... always without success. Two years ago, Charlie Conn and I had hooked a big arapaima and our guide Neto had cried. He had never hooked one on his watch before. Unfortunately, we didn’t land this fish. After a 20 minute fight (with an 8 wt.), the shock tippet had finally parted, but I had learned a lot.
This year, we were seeing a few arapaima in shallow water. Maybe this would be the year! Then Doug Jeffries, with Bacaba as his guide, devoted an entire day to the pursuit of one... and he returned that evening with a story of success! Now it was game on!


The next day, with Bobby Sawtelle, I decided to devote my deck time to arapaima. I let Bobby fish most of the morning for peacocks and wolf fish while I watched the lagoon. From time to time, I saw a big arapaima roll sucking in air to fill its swim bladder that doubles as a lung. Big eyes, a bucket of a mouth... anglers call arapaima the tarpon of the Amazon. For me, they are more like a permit... if a permit grew to be 150-200 lbs.! Arapaima seem intelligent. They are very wary and obviously very difficult to catch. The prevailing wisdom has always been fish them deep. In the last few years, some arapaima are being caught at various South American destinations with big sink tips, but only after thousands of blind casts.

But today, after Bobby stepped down from the deck, Bacaba and I started seeing arapaima roll. After they sounded, we watched their bubble trails fade away. Soon, I started seeing a few three or so feet under the surface. Of course, Bacaba did too. It wasn’t long before we "synced-up" doing that thing you do with very good guides where you both know what’s going on without ever talking about it. A few near misses and one great opportunity spoiled by a small peacock brought us above a fish that was lolling just below the surface 70-80 feet away. I made sure my 2nd haul was right and presented a fly into what I though must surely be within the arapaima’s window. A quick strip or two and I felt a nick. I stripped hard and a fish was on. I thought initially it might be another small peacock... then all hell broke loose. The fished lunged up and out seemingly too big to clear the water’s surface. 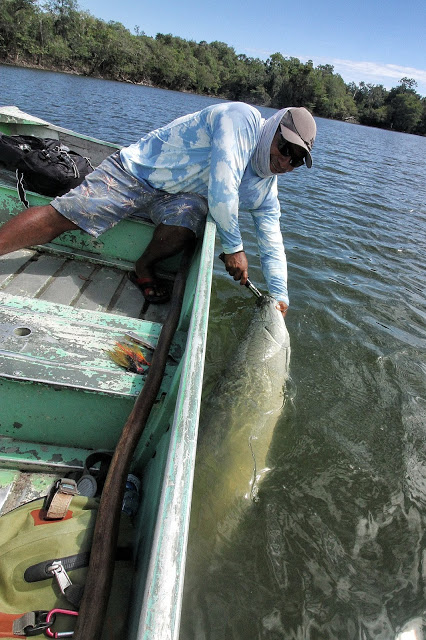 Bobby was quiet behind me until he saw the fish then he spit out “Holy Crap.“.
Then the fish sounded and stuck to the bottom like a suction cup on glass. With great effort, I worked the fish back to the surface numerous times only to have it vociferously sound once again.
After what seemed like an eternity, Bacaba said “He is getting tired. Work him towards me.”
I did and Bacaba expertly grabbed his lip on the first try.
“I could kiss you.” I told Bacaba. 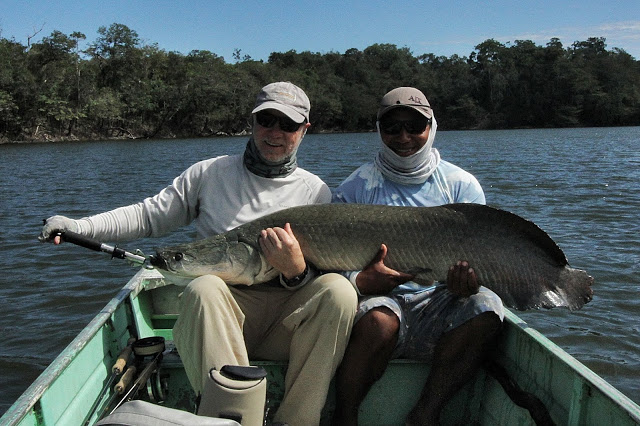 The stocky guide tried to lift the fish, but to no avail. He handed me the boga with fish attached and we both hauled the fish into our laps. I handed Bobby my camera. He took a few quick photos then it was back in the drink. I took a few more photos while Bacaba revived the arapaima. Soon, the fish strongly finned away. We estimated his weight at somewhere around 70 lbs. Who knows? Do I care... not one damn bit! 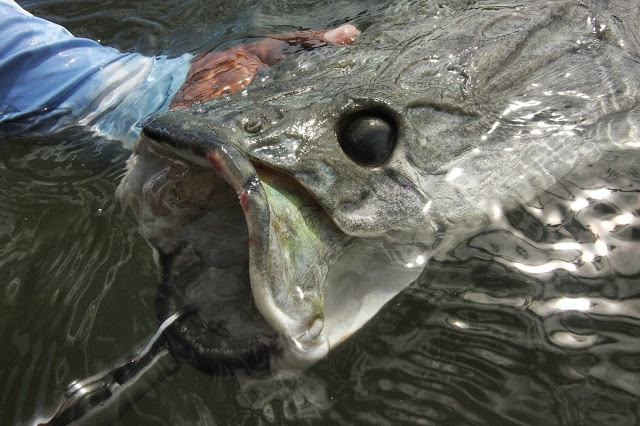