Back to top
Authors of the well received novel Revenge of the Wandering Spider, spent a day together on the Agua Boa River. Doug and John are old friends... Here is John Rigg's account of their day. 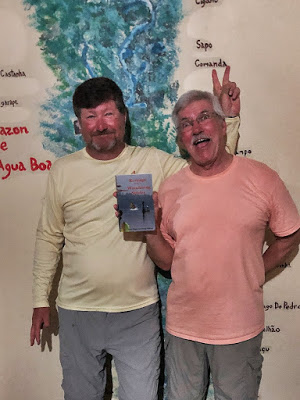 The authors... John and Doug (holding their book).
The day dawned as it often does at the Agua Boa Amazon Lodge.  I was fortunate enough to have Doug Jeffries as my writing and fishing partner and head guide Joseph as our guide.  Destination:  Zone 5.
Our first stop (and where we fished the majority of the day) was a series of low water sandbars that poked out almost 2/3rds across the river.  They meandered back and forth.
“What are we doing here?” I wondered to myself.  Joseph had taken me and Steve Peskoe earlier in the week to a fishy lake that I wanted to return to and enjoy the borbeletto riot with my popping bug.
Doug took the deck like McArthur storming the Philippines. In a very few moments of scanning, Joseph said in an excited voice, “Doug, beeeggg one, over there!”  The fisherman turned to see where Joseph pointed.  Sure enough, there lazily swimming on a sandbar was Mr. Temensis, a healthy looking creature that had to go at least 10 #s. 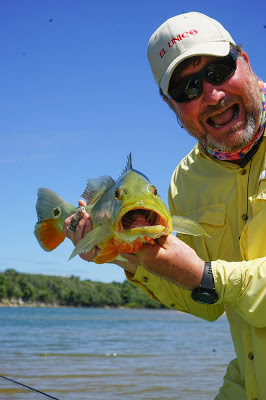 Doug began his windup (some might call it “false” casting, but I tend to be much more cheerful), and soon zipped the fly and line in the general direction of the fish.  “Closer to feessshhh Doug!  He can no see it!" exclaimed Joseph the excitable guide.  Obediently, Doug recast, this time hitting 1’ in front of the fish’s nose.  “Strip!  Strip!  Strip!” yelled Joseph.
Like a nuclear torpedo traveling at Mach 1, the fish turned and attacked Doug’s fly.  With a mighty heave, Doug gave a trout set to end all trout sets resulting in the fly disembarking from the fish’s mouth. “NO MOVE ROD DOUG” Joseph spat out.  For his part Doug looked sheepish and began muttering to himself.
He looked back at me.  “You want the deck?”
“Naw, let’s see you stick something rather than just scare it.” 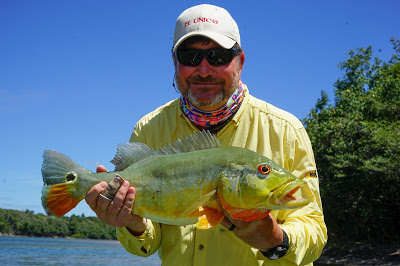 Joseph soon spotted more potential customers. “Big group Doug! Ten O’Clock!” said Joseph (I don’t know why but all day any fish Joseph saw was at 10 o’clock. Perhaps his watch only shows one time). The man on the deck wound up and let fly his fly. It landed reasonably close, he immediately striped, and a bass obediently inhaled his fly. This time Doug gave a determined strip set and the fight was on.
After a respectable tussle, the fish came to boat. “How big Joseph?” queried Doug as we always do with the guides. The guide studied the fish laying on its side in the water.
“Nine pounds” he proudly exclaimed. “No way, Joseph, he’s at least 12” Doug retorted. Joseph hopped down from the poling platform and grabbed the fish with his boga. He studied the numbers.
“Nine pounds.” Doug looked up at me.
“See, that’s why I always tell you to listen to the guide! And don’t bring out any PINK poppers!” 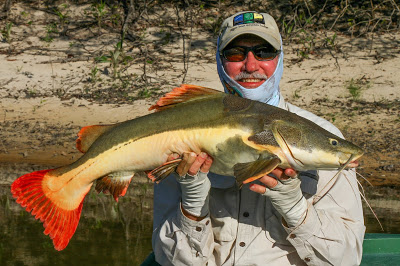 I stood, took the deck and pulled out about 20 more feet of line than I could ever cast, trying to look macho.  Another nice school was spotted by Joseph. My initial cast landed 30’ short because the line had wrapped around my ankle.  I cursed, did a jig to get the line off me, and began to cast again.  The fly landed 30’ short again.  This time a huge tangled knot stopped the line before the first eye.
“Shit shit shit” I muttered aloud.  My fingers began to untie the bird’s nest, me working as quickly as I could.  Soon (at least in my world…however in the real world it might have been several minutes) I was free and ready to cast.
“Where Joseph?”  I yelled.  I looked back.  Both guide and fishing partner were looking at me with puzzled looks.
“Fish gone.”. “I think the jig scared ‘em off” Doug added. 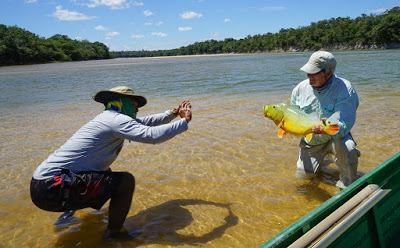 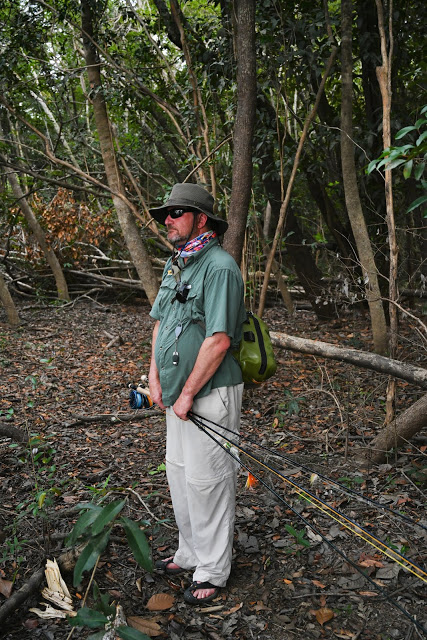 And so, that was how our day went.
Doug would ascend the throne, spy a fish, make a perfect cast, and a fish was on.  At my turn, Joseph would excitedly point out a fish, I would attempt to cast, and the fly would either be long, short, wide, or in the back of my shoulder.  If I was lucky, it would just tangle around everthing possible in the boat.
We sight fished the entire day seeing more bruisers than any two fishermen deserved to see.   Doug had a titanic battle with a 16 pounder who took him to his backing.  After getting the fish in, taking numerous pictures, and releasing the behemoth, Doug and Joseph began arguing about the fish
size. 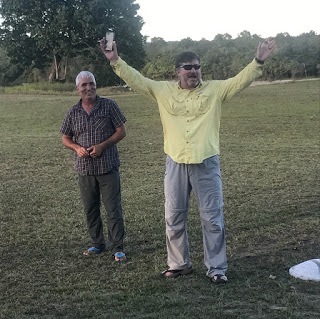