Here at Angling Destinations we have some clients that are real characters. One of our most colorful is Jeff Rodenberg. Jeff has made numerous contributions to this blog and loves to give me a hard time. I usually deserve it. It pains me to say, but Jeff is an accomplished fly tier and an excellent angler. He is also one hell of a lot of fun to fish with! Jeff and I have fished together in many exotic locales over the years... Mongolia, Bahamas, Cuba, and Kamchatka (AND THAT"S ANOTHER STORY... RIGHT JEFF!) just to name a few.
Whenever Jeff books a trip, we can count on some colorful e-mails (these arrive when he finally decides to send us the details on his flights/logistics for his trip). Below is the latest example. Jeff is going to Costa Rica with his daughter and when he decided to send us his Global Rescue info, he included the following. (MY COMMENTS ARE IN RED)
Okay guys,
I think this is about the last of the stuff I need to send you before the trip. Our Global Rescue info is attached (IT WAS NOT!). Let me know if you are missing anything.
Ohhh…wait…I also wanted to show you some of the flies I made for the trip….in case you have any suggestions….
And I’ve decided to name my flies….not like pattern names, but just names to denote who they are, with different personalities….
I call this first one “Clarkyth”….(FOR CLARK SMYTH of ANGLING DESTINATIONS ) see….I wrote his name right on the popper head….with magic marker…..
You’ll notice it is the longest fly….kind of like Clark’s first ever email to me…..
Most of the time, the old guy that used to own AD (THAT WOULD BE ME SCOTT HEYWOOD) would send me an email after he got my money, and it would say something like “See you in Ulanbataar on the 26th”. I guess you guys in the biz call that a “comprehensive trip information packet” (JEFF IS STILL PISSED FOR THE COMMENTS I MADE LAST APRIL WHILE WE WERE PERMIT FISHING IN CUBA) 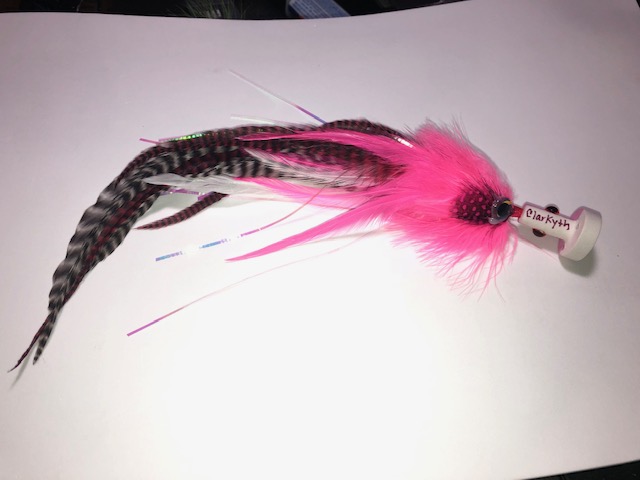 ).
So once I figured out where Ulanbataar was, I could fly there on the 24th, you know….just in case there was a typo on the date or something in the packet….but that didn’t happen very often…..typos I mean….. (YADA, YADA, YADA)
I call the second fly “Hanky” (FOR HANK WELLES of ANGLING DESTINATIONS) ….I put that name right on the popper head too…..with magic marker….. 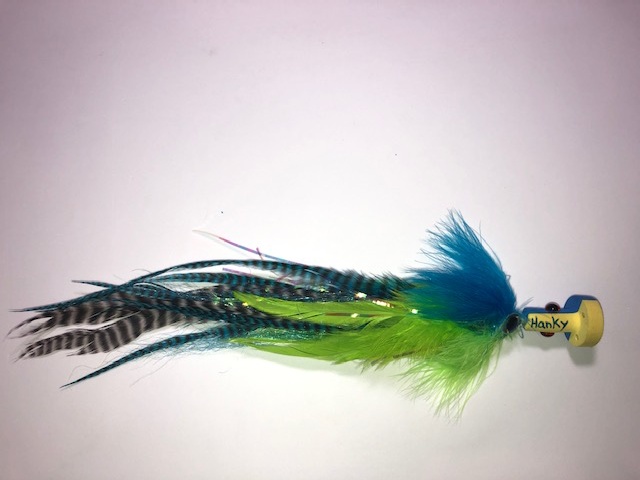 Its got lots of green on it….like bright green boogers….so….like a hanky would….
Not saying Hank gets lots of boogers….I wouldn’t know about that….
But if somebody does get a lot of boogers, a hanky is the most reliable way to catch them coming out of their nose. And I think this fly might be the most reliable of the bunch in terms of catching something, even if it’s a dorado. Most reliable…like Hank seems to be…. (GOOD LORD!)
And here is one I call "Mr. Heywood” (I KNEW THIS WOULD BE COMING).
You can see the popper head has something different written on it…..in magic marker…..
Yeah…it’s not a really conventional sailfish fly, but if it doesn’t work for that, maybe it could catch a roosterfish or something…..Besides….I plan to soak it in some Atlas Mike’s Lunker Lotion (Tuna-flavor) you can buy on the internet (really….look it up….its on there…..)
It’s like when Scott told me to soak my permit flies in crab juice…so that should make them work more better…. (NEVER HAPPENED AND IT STILL WOULDN"T HAVE HELPED HIM IN CUBA! )
Oops - I guess Scott told me not to tell anyone about his permit fly secret….don’t let anyone know I was the one who spilled the beans….okay…?
Hey…I know….you guys have a flyshop too….do you have Lunker Lotion there? Then I wouldn’t need to buy it from the internet….
Oh wait…..what was I thinking? Lunker Lotion from a flyshop in Wyoming???? ….That would be funny…..I must be losing it…….
Anyway, here is the whole new AD family ready to go to to Costa Rica. 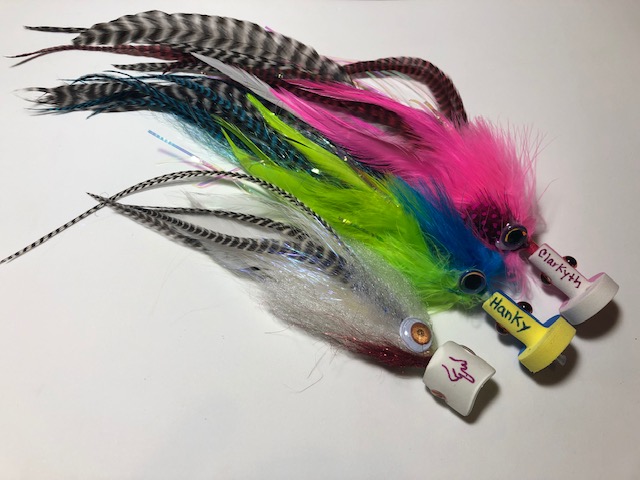 Best,
Jeff
P.S. I know what you’re all thinking….”whose fly is going to be the one that gets Jeff his first sailfish?” (FAT CHANCE COMES TO MIND, IF YOU DO MANAGE TO FOOL A GENETICALLY CHALLENGED SAILFISH, I WANT PHOTOGRAPHIC VERIFICATION)…
Please!…no arguing or wagering…I want you all to stay friends with each other….
and it really doesn’t matter to me….I like all of you the same….
P.S.S. Hey…I also talked to another guy who said he was part of the new company…named Peter…Do you know Peter? Do I need to make a fly for him too? I don’t want him to feel left out…. (YES PLEASE, NAME IS PETER WIDENER)