Back to top
Day 1:
Our hostess, Eysa, cheerfully promised coffee would be on at 6:30 am. It was. A beautiful (and miles more than ample) breakfast of fresh fruit, pastries, eggs, and bacon followed at 7:30. Then it was off to grab gear, glob on some sunscreen and grab drinks for the day. 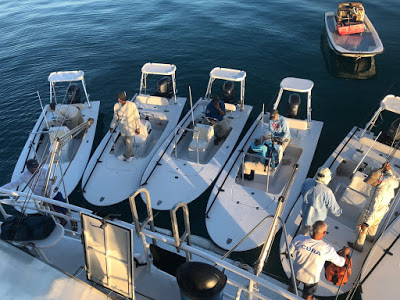 We were in the immaculate Dolphin skiffs soon there after. It was quite clear we were surrounded by very competent people from the Avalon 1's captain, to our chef and staff all the way through our amazing cadre of guides.
Steve Peskoe and I took off on with head guide Manolo who was simply superb all day. Initially, we left the mothership running under a light rain with calm winds... perfect tarpon conditions. As soon as the rain stopped, the winds began and a cold front soon zipped in like a party buzz killer. These strong cooling winds didn't leave us for two days. Cold fronts are the bane of tarpon fishing, but still we managed to find and catch tarpon each day. In fact, I boated two tarpon on my first two casts. I should have quit right there while I was batting 1000!
Steve managed to jump and land a few fish even under our deteriorating conditions. Manolo pressed hard until the sun slid beneath the horizon's cloud cover. Within 15 minutes, we were back at the Avalon 1 listening to our compatriots stories mostly of success and the competence of the guides. A great day, despite the coolish weather, was had by all.
As the evening wore on everyone settled in including the staff. The atmosphere became very jovial and relaxed. Not only could this group fish, but they knew how to have a good time... the guides and staff immediately picked up on this. When this occurs... an atmosphere of fish hard, confidence in the guides, blame yourself for any failures and don't make it all about you... success is virtually guaranteed. I knew this would be a good week!!
It was. 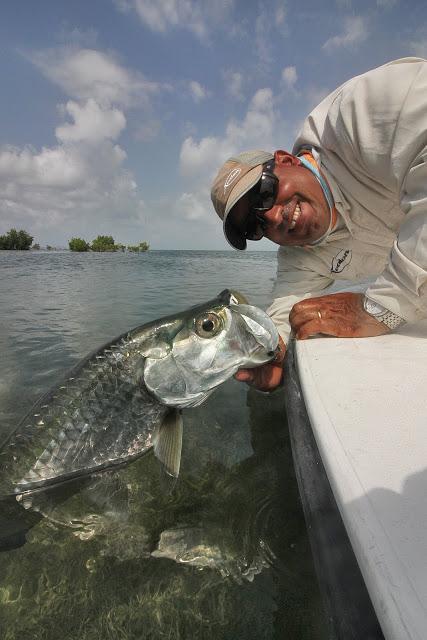 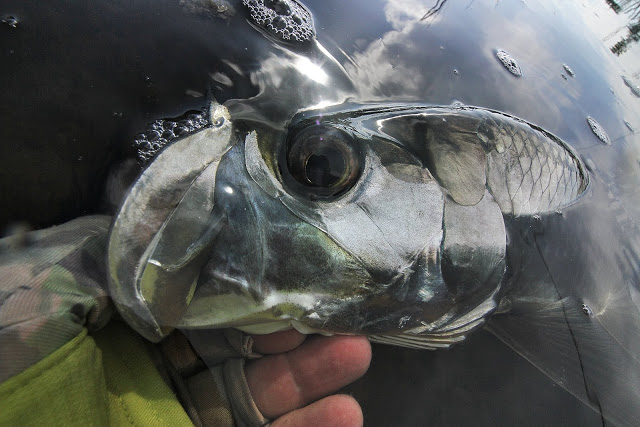 Our schedule was perfect for tarpon. Fish the morning until 1:00 pm, break for a sumptuous lunch on the mothership followed by a siesta, then back in the boats until dark. And when I say dark, I mean dark. We were never pushed to quit early, in fact we were often pushed to make "just one more cast".
On day Two, John Riggs and I were winding down after a very full day. We had been in tarpon much of the late afternoon on a falling tide and successfully fished a channel that was quickly emptying a large basin. When we pulled up, we knew there had to be tarpon in the swift current. John immediately caught a solid fish of 15-20 lbs., then jumped and landed many more until we had tagged almost every fish in the run.
Wicho moved us to the reef to get some shots at the "big boys" and with the sun setting, John finally called it quits. We were both spent, so we handed the rod to Wicho who promptly got into a big fish. John and I drank beer and cheered as Wicho worked. A perfect way to end a perfect day. After a good struggle, Wicho landed his fish. We fist-bumped our guide then stored the rod. Wicho was thrilled with the opportunity and we were thrilled he was successful. Soon it was back to the boat for cocktails and another fabulous dinner. 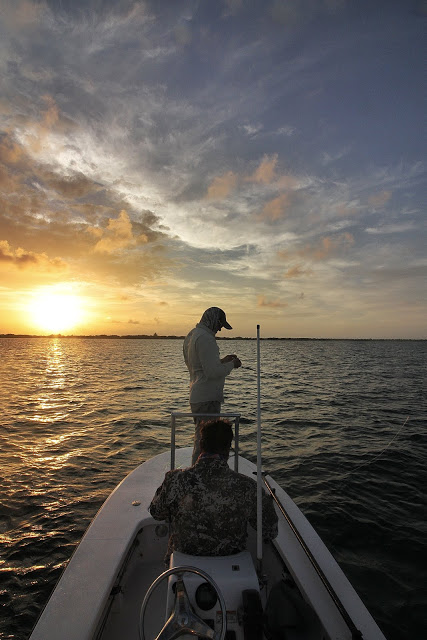 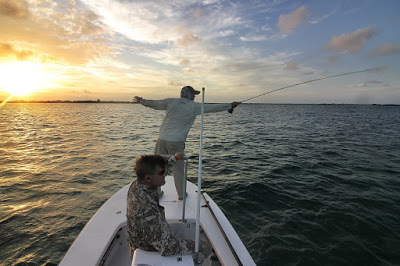