Back to top
By day 3, we had hit our stride. Despite the high winds, everyone had had at least some success with tarpon, we knew the capabilities of the guides and we were all now well-rested and certainly well-fed... and now the winds began to drop. I spent Day 3 with "Big Fish" Jim Woollett. No matter where I go with Jim, he catches a big fish. If it's the Bahamas, he catches a 10 lb. bone, if in Cuba it's a hundred pound tarpon or a Grand Slam.  Some guys are just like that. I should hate him for that, but Jim's so much fun to fish with I'll give him a pass. In any case, Jim and I had a great day together. We fished with guide Lindy and pursued permit early (we had a few shots, but no cigar), then focused on tarpon. 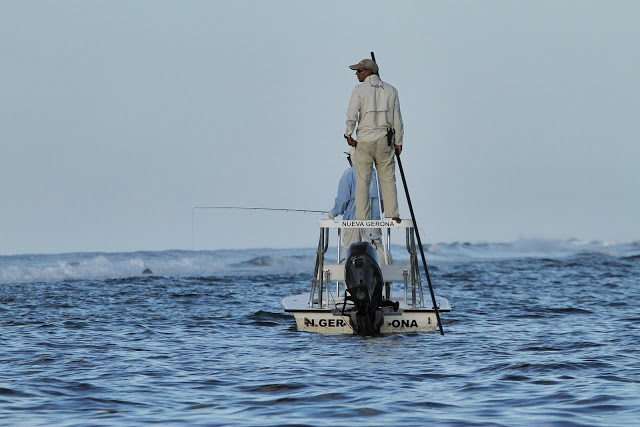 Jim and I ended the day at the reef. Just meters inside this coral fringe, Jim hooked a monster that jetted through the hull-wreaking rocks into the blue. Jim played the tarpon for a long time as we all watched dazzling jump after jump. There was no way to get to the fish through the shallow reef so all Jim could do was crank his drag and hold on. "Big Fish" fought the fish with his rod bent to the butt until a final sunset gold leap unbuttoned the monster. A few deep breaths were taken as Jim reeled in 300 yards of backing and fly line while Lindy retrieved the anchor. It was time for a beer! 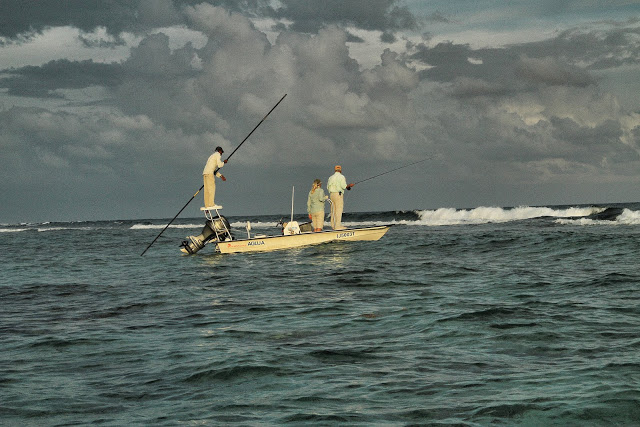 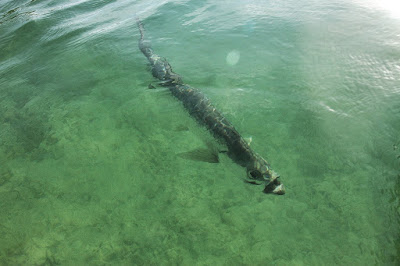 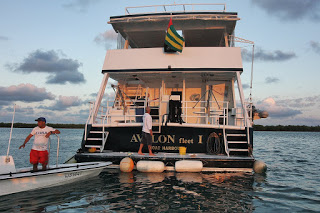 Later in the week, Jim did catch his monster almost in the same spot. Jim was with head guide Manolo then and he was able to find hole in the reef that allowed them to pursue this even bigger fish. Here is the photographic evidence. "Big Fish" gets to keep his moniker for at least one more year! (more on this tarpon soon). 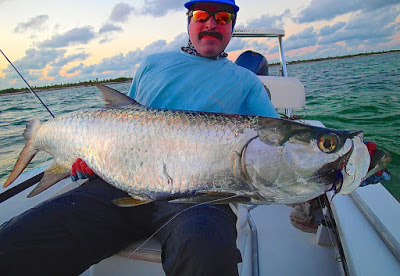 The following day, I fished with Art Carlson. The day dawned clear and calm, with only a few large thunderheads low on the horizon. Initially, the light was good and the seas dead calm. Art and I took off with Yosbel and after a slow start, we headed up a narrow channel that opened up into a magnificent dead calm lake. We saw a few big tarpon rolling, but with the calm conditions, the tarpon disappeared before we could get a cast off. As we quietly stalked the rolling tarpon, the thunderheads climbed higher into the sky and spread out to engulf the skyline. Soon thunder was constantly rumbling and lightening was piercing the clouds. Art seemed unconcerned. I on the other hand, became more and more nervous as the thunder got louder and closer. I knew all hell would break loose soon. Then it hit me... 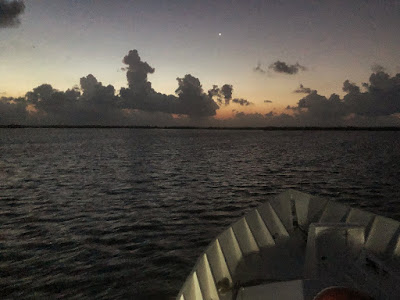 In the classic comedy Caddyshack, Carl, played by Bill Murray, caddies for the Bishop as a massive storm descends on the golf course. As each hole goes by, the rain intensifies as the Bishop hits amazing shot after amazing shot. Despite the storm, the Bishop is having the round of his life. 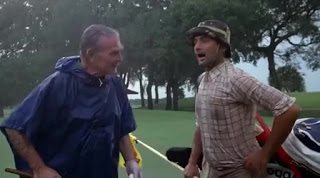 When it is suggested the Bishop quit due to all the rain, lightening and thunder,
Carl idiotically says "I'd keep playing. I don't think the heavy stuff will come down for a while."
The Bishop replies, "You're right. Anyway, the good Lord would never disrupt the best game of my life." 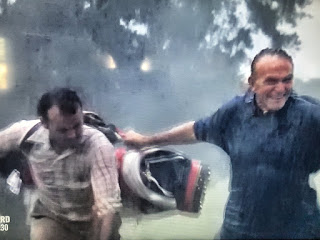 Soon the Bishop misses a long putt and yells "OH RAT FARTS!!!!!"
Just then the Bishop holds up his golf club beseeching the heavens for screwing up his round and is immediately struck dead by lightning. Bill Murray drops the Bishop's golf bag and slinks away leaving him there prone on the green. 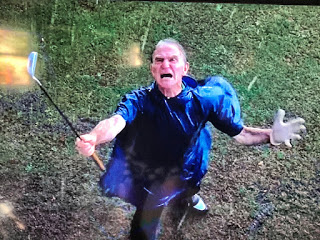 As I sat watching Art's chiseled visage seemingly impervious the the lightening crackling around him, the resemblance of the two men, one fictional one very real, seemed uncanny and little spooky. Both the movie character and my partner are robust older gentlemen determined as hell "to see this play out". I just didn't want the end
result in the movie to be the same today.  Besides, I was seated 5 feet from Art!
Soon Yosebel and I caught each other's eye... we knew what we needed to do. We yanked Art off the casting deck and raced back to the mothership with the storm licking at our heels. We beat it as did all the other members of our team. The rain came down in sheets and the lightening and thunder crashed menacingly all about.
At lunch Art said with a bit of a smile as if there was no risk, "Have you really ever heard of anyone every being struck by lightening in a boat."
Almost simultaneously, about 5 of us said "YES!"!
Such is Art! I want to be just like him when I reach my 8th decade. Full throttle damn the torpedoes! 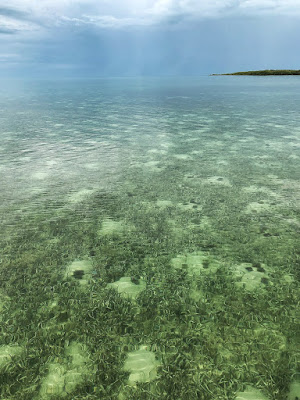 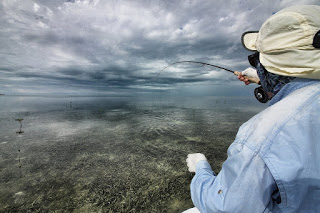 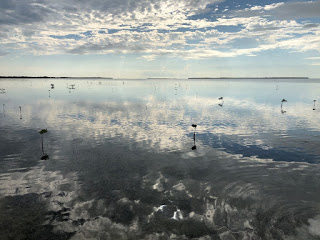 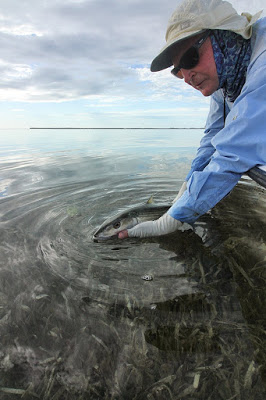 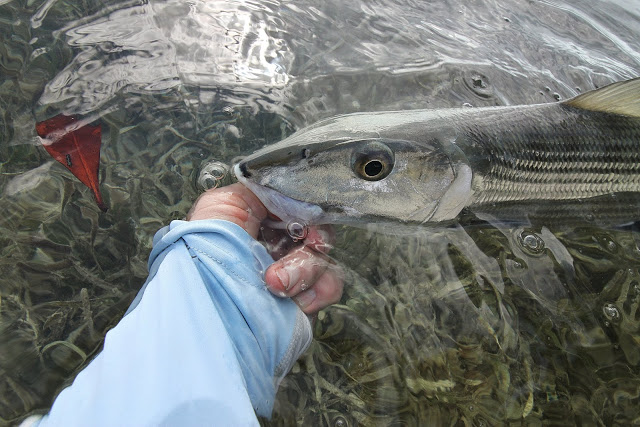 The rest of our day was spectacular. The storms moved on, the seas flattened and eventually the sun came out. Right after lunch, Art caught some big tailing bonefish that weaved enticingly in and out of single mangrove shoots. Beautiful to watch and exciting to cast to!
Just around the corner from that bonefish flat... not 200 yards away, Art jumped at least a dozen big tarpon and boated half of those. We spent the rest of the afternoon there... It was simply great day! 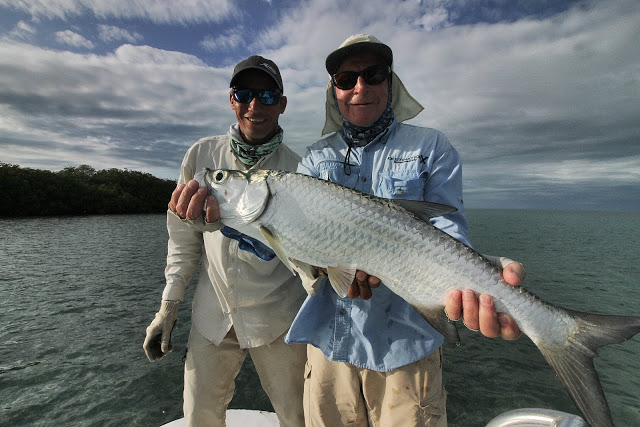 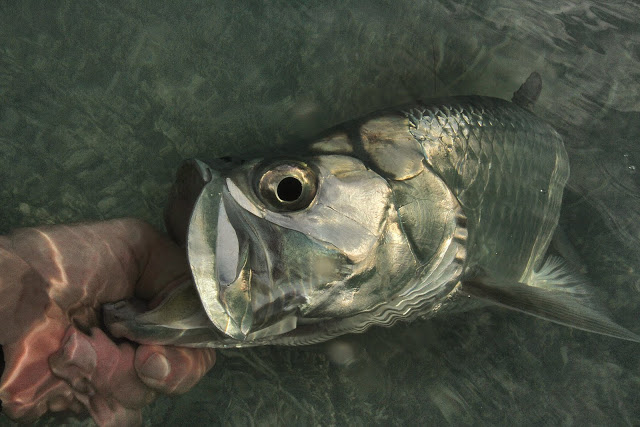 Next: The last two days.