Back to top
My good friend, Chuck Ash, just returned a couple weeks ago from Little Abaco Bonefish Lodge. Chuck guided for many years in Alaska and knows the state from the Arctic to the Panhandle. He has floated and explored most of the major river systems in this massive state and is clearly one of the most experienced and accomplished guides I know. Chuck was my boss on many raft/kayak trips in the Bristol Bay area, as well as in the Arctic and Kenai Fjords.  I guided with Chuck for many years and learned a ton from him. It is rare when you work for someone (who is also a friend) and as time goes on, your respect for that person grows. In addition, Chuck has fished the Seychelles, Mexico, extensively in the Bahamas and Baja. Given his experience, I very much trust his opinion.
Chuck filed this great trip report on Little Abaco Bonefish House which covers all the details of this new operation. The lodge is on Great Abaco Island in the Bahamas. If you drive as far north as you can on Abaco, you end up at Crown Haven. The lodge is on the outskirts of this small settlement. While not for everyone, LABL is receiving great reviews from the "fish first" crew.
Read this report carefully, then decide if it is for you. And thanks Chuck!... This is a terrific asset for any angler contemplating a trip to Little Abaco Bonefish Lodge.

The Lodge: Sidney grew up in Crown Haven and built this place 30 years ago but the summer of 2018 was the first time he had lived in it. All in all, the lodge is clean, well-maintained and comfortable. There is a central dining area, bar and kitchen that is smaller than at Water Cay but is certainly adequate for a group of 6.

The building sits on the main road and faces south. Sidney and Keeta’s residence is on the west side (LH side in photo), the kitchen-dining area is in the middle with the front door and rear double doors both opening into it. Guest rooms are off a hall to the east (RH side in photo). There are 2 double rooms on the south (road) side of the hall. On the north side of the hall are a bathroom with a shower for the 2 south-side doubles plus a double room with its own bathroom/shower. Each room has two twin beds, a large open closet with shelves at each end, a new air conditioning unit mounted outside with controls inside and a ceiling fan. At present there are no end tables or dressers in the rooms, but Sid is still in court trying to get his possessions back from the owner of the old building on Water Cay. Those possessions include his beautiful dining table and chairs, bedroom furniture, kitchen equipment and even the pictures that were hung on the walls. The attached utility room off the garage on the east end of the building is used for rod storage, laundry and storage of lodge gear and supplies.
At some point, another bath will be incorporated into the utility room, and maybe more guest quarters in a new building on the back of the lot. Also a screened-in porch, maybe front, maybe back, but screened. No-see-ems were not unbearable during our time, but they and the Bahamas mosquito definitely live here.
While we were there Sid had a local man clear the vegetation off some of the land behind the building. I asked Sid what his plans for that area were and he said that he wasn’t sure yet, but over the course of our two weeks he talked to me about extending the concrete deck that’s out the double rear doors and making a covered, screened-in area there, plus adding bearing trees to the newly-cleared area. He planted 2 hog plums while we were there and has plans for some citrus and other trees. Knowing Sid as I do, I am sure there will also be a vegetable garden somewhere behind the house when we show up next spring. 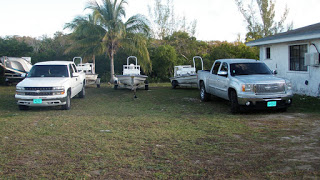 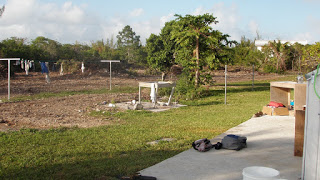 Right now cash flow is the limiting factor in continuing the improvements and bringing the lodge up to the high standard that Sidney envisions. He is capable and hard-working and has Keeta right beside him, so as revenues continue to come in, the place will continue improve.
The boats are stored on trailers at the west end of the yard and there is a clothes line out back to dry wet gear at the end of the day. The front porch now serves as the lounge area for morning coffee and evening sundowners.
Food, Drink and Lodge Life: If you are after an insular lodge experience with polished amenities and American style food, you should probably look at other places, but you’ll be giving up a lot. At Little Abaco the fishing is as good as it gets and you’ll be surrounded by island life and all of the great things it has to offer. We had cigars and sundowners on the porch each evening, laughing and rehashing the day’s events. Locals walking or driving by waved, said hello or honked their horns to us. That friendly attitude continued wherever we were.
Tommy, the fellow who owns the boat and fuel dock, is as hard-working as Sid. We saw him on a daily basis and he would stop his work to chat with us. The same pleasantness was true with the folks at the Tiki Bar in the harbor area and with every local person we met. You could tell from their friendly attitude and from the respect they showed Sidney that they were glad to have Sidney, his business and his guests in Crown Haven. It was a real plus to be so welcomed into the local community, so different from atmosphere in Freeport or Nassau.
Keeta does the cooking and it’s wonderful, tasty Bahamian fare. Breakfasts were scrambles eggs and bacon or cereal w/ bananas and fresh-brewed coffee.
Lunches on the boat were 2 sandwiches that varied between tuna, egg salad, sliced turkey and sliced ham. The turkey and ham sandwiches were made from whole turkey breast or a baked ham, not from packaged meat. A package of potato chips, granola bars and a candy bar for each fisherman were included in the lunch. Ample bottled water, soda and Gator Ade were also in the boat coolers.
Dinners were conch, fresh fish, chicken, pork chops, ribs or spaghetti accompanied with a changing combination of pasta, rice, rice & beans or grits & beans and always a salad, slaw or mixed vegetable. One advantage of Little Abaco over Water Cay is that there is better access to both fresh sea food and fresh vegetables.
The lodge provides both Kalik and Sands beer for $3.00 a bottle. If you want Guinness you’ll have to let them know in advance so they can lay in a supply. Wine and hard liquor is BYO and Sid or Keeta are willing to stop at a liquor store after they pick you up at the airport so that you can get what you like.
Unlike Water Cay, there is a tiki bar within walking distance for the not-so-faint of heart. Friday through Sunday nights are most active, and some might prefer mid-week visits. It is the local hangout and offers cold beer, locals, local foods, nice breezes and a view, not as compelling as Water Cay, but enough to satisfy your need to see the sea.
The Daily Routine: We were up by 6:00-6:30 am, Keeta had the coffee maker programmed so that we always arose to the smell of coffee. She was making breakfast by 6:45. Around 8:00 the boat trailers would be hooked up and we’d drive less than 5 minutes to the ramp, off-load the boats and were heading out. We broke for a quick lunch on the boats mid-day, fished the afternoon and were back at the ramp around 5:30 pm. Porch time was the late afternoon routine until dinner around 7:15-7:30.

The Fishing: The fishing environment around Little Abaco is subtly different than that around Water Cay. Around Water Cay it was mainly extensive, shallow mangrove flats with tidal creeks that flooded with the rising tide. High tide was a tough time to fish there because many of the fish were back in the mangroves and thus unreachable. Around Little Abaco there is little of that type of habitat, so the fish are more accessible at high tide. It is mostly rock shorelines and sand beaches with both sandy and vegetated flats. Some of the sand flats are extensive, one being well over a square mile in area. Others are smaller pocket flats off of smaller beaches. These sand flats are all wadable and as a result we did a LOT of wading when the tide was low. There are also some passes between keys that have soft, vegetated bottoms plus a few creeks and back bays reminiscent of Water Cay. We poled these areas and also some of the beaches and shorelines when the tide was up. The vast majority of our wading was comfortable, on fairly hard and reasonably level bottom structure. 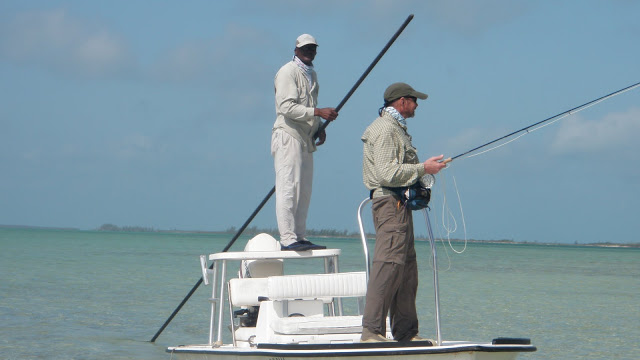 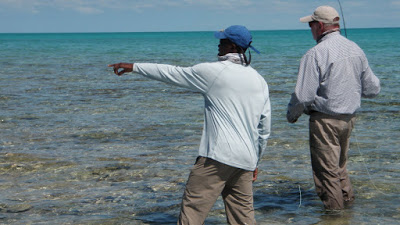 There are 3 main areas to fish out of Crown Haven, and the wind was the determinant as to where we fished. Along the south shore of the island to the east are extensive sandy flats and a couple of creeks and back bays. When the wind was east or north this was the usual area we targeted. If the winds were light it opened up access to the keys south of Little Abaco that extend toward Grand Bahama Island. This area had wadable flats, though fewer than along the south shore, and held the advantage of more and varied shoreline. If the winds were out of any quarter from the south it made the north shore of Little Abaco the place to be.
The fishing to the east along the south shore holds schools of smaller fish and scattered groups of larger bones. Among the keys to the south we generally found larger fish. The same was true of the north shore area, plus we saw most of the mutton snappers there (Don and Alan each caught one…and we ate ‘em!). 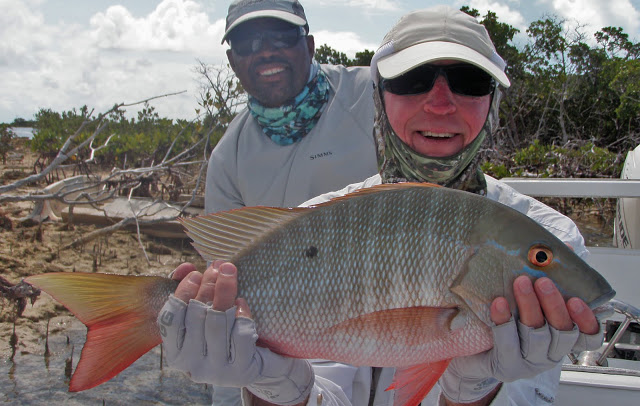 The only other boats we saw in two weeks were from the east side of Grand Bahama and only on the farthest flats to the southwest. To say that the area is lightly fished would be an understatement. Bonefish are bonefish and all can act strangely – some days or even hours brain dead and aggressive; other times skittish and particular to flies, bird, sharks, motion or who knows what. We saw more schools of fish here than at Water Cay, but most schools included some tempting big fish as well as the popcorns. 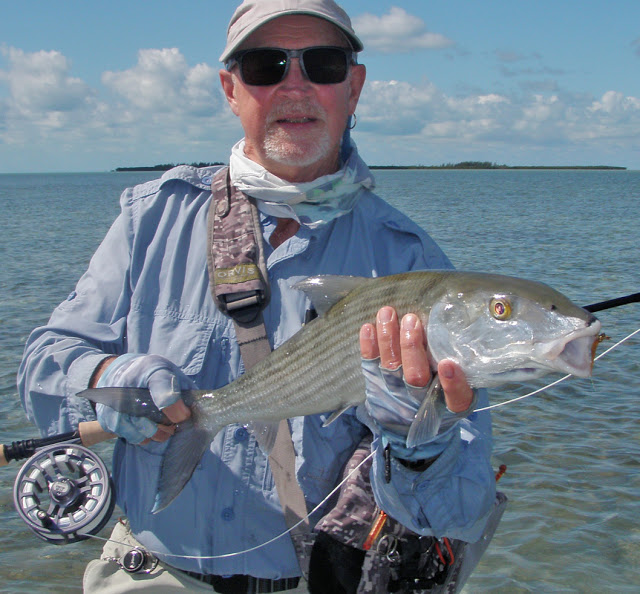