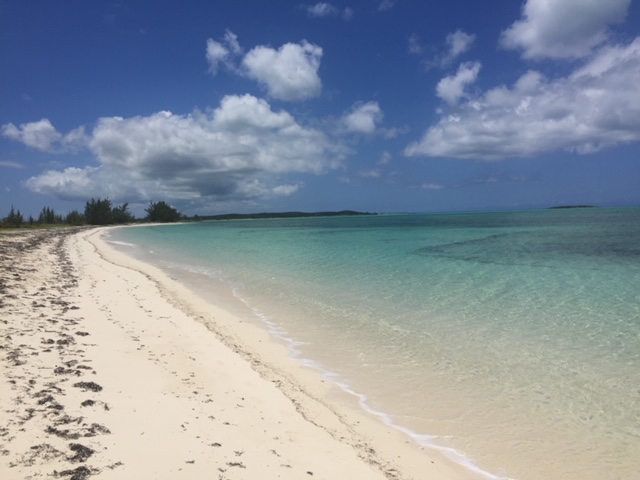 Doug and Pam Soltis just returned from 10 days on Crooked Island. We organized their trip so they would be headquartered at the Crooked/Acklins Lodge at Mason's Bay. This was Doug and Pam's second trip to this destination. This year, they spent five days with guides  from Landrail Point and on the other days, they self-guided. Here is their report:
Thanks Doug and Pam!!

Hi Scott,
Just a quick note to let you know we had another fantastic trip to Crooked. The weather was rough for a few days. But other than one day where the bones just were tough the fishing was great. The lodge was fantastic and we had a great time with other guests.
The kayaks were really fun to have. We kayaked all around the cove and out to the two islands. I hooked and fought a huge barracuda on 12 lb. test from a kayak. After 45 minutes he gave up — a perfect hook set.  Did not get a good picture once the fish was next to the kayak, but you can see the large head just beneath the boat. 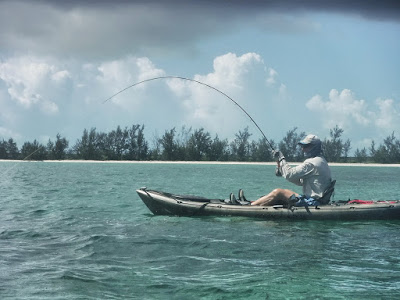 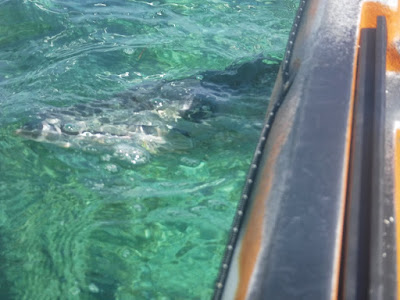 Pam went out one day with Michael again. He was great and she caught some nice snapper. It was very fun to have Pam catch some nice snapper and a nice jack too. Michael really did a great job getting her on some fish. 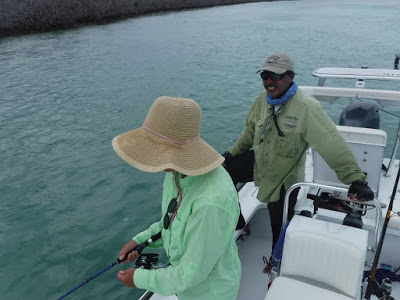 Did not catch any bones over 7 lbs., but lots 3-4 lb. Caught a number of things flyfishing from the kayak---one trigger and a number of different jacks plus the large barracuda. 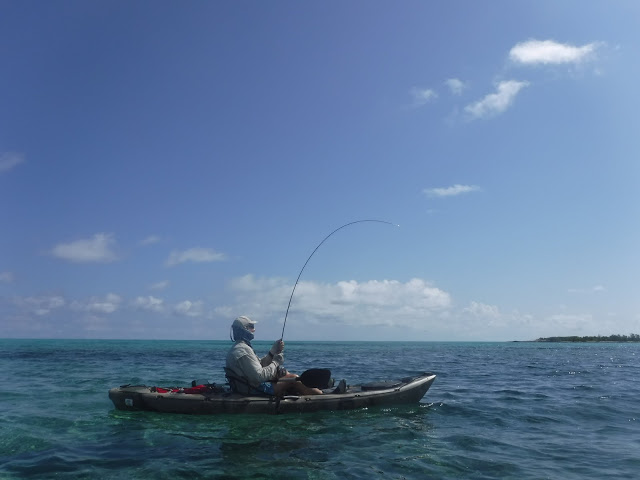 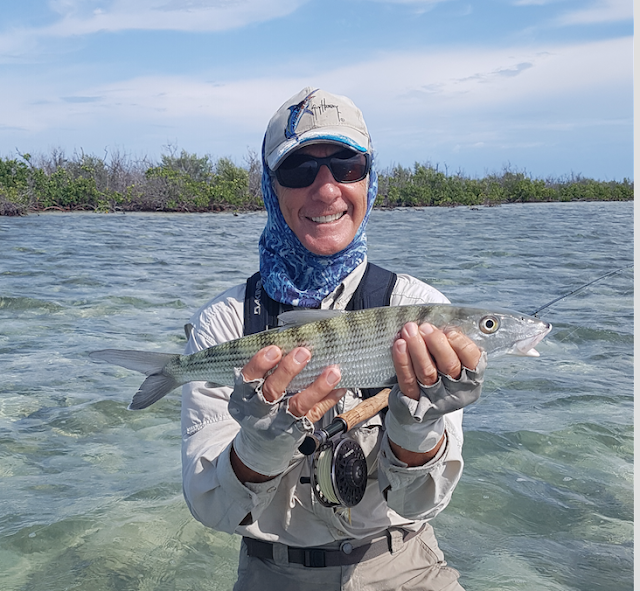 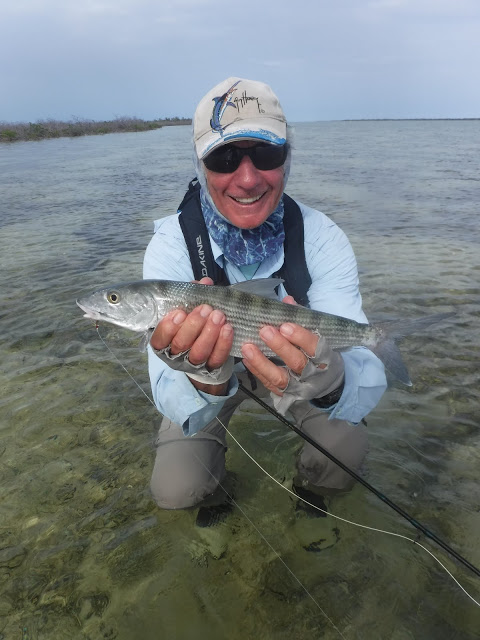 ....and a few days later I got some additional info and a few more photos from Doug:
Hi Scott
Here are a few more photos [and a bit more info]:
Wind was a problem many of the days on the water. But there was really only one day for me (two for other guests who fished every day) where the bones just did not want to cooperate. Finally went to a 12 foot or longer leader (up to 14 ft) and that helped. Decided to stick with longer leaders the rest of the time I fished.
The average size fish there is always so impressive as you know. No small fish during my time on the water. It is really a pleasure fishing there. Wading on the Acklins side is my favorite thing to do. I really enjoy that whole game of sneaking up on the fish and making or trying to make the perfect cast before they spook.
I only saw one permit during my time there and one tarpon (both on the first day).
Really enjoyed paddling the kayaks around. On one calm afternoon Pam and I explored most of the cove. I also had fun fishing from the kayak. Quite a lot of fun. I also hiked around Thompsons and explored that area more—some very nice water and fish there.
We had some beautiful sunsets. We also enjoyed running down to see the flamingos in the morning. 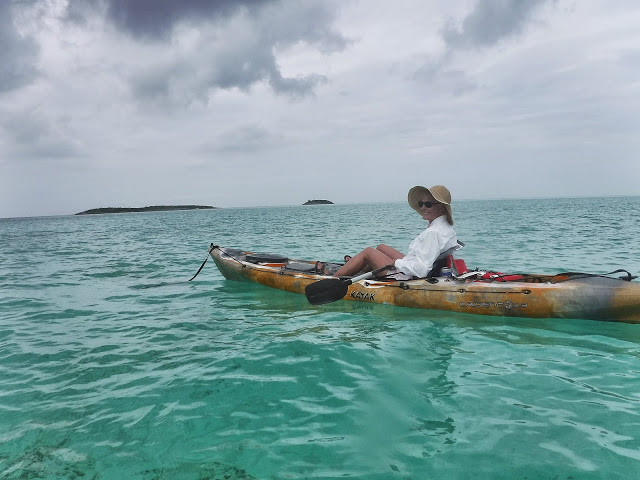 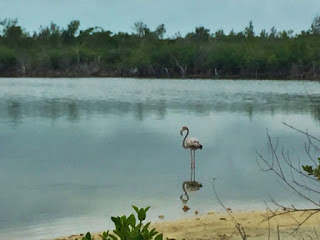 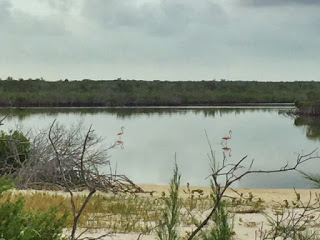 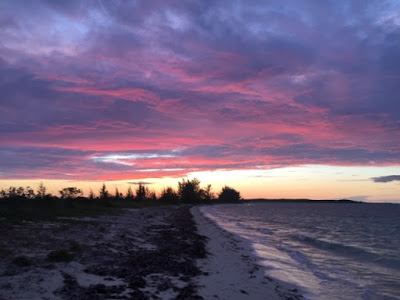 Angela [ the lodge manager] was great as was the case the year before. Thanks again for putting us on to such as special place.
Doug 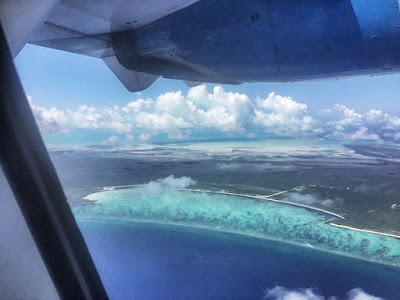