Yesterday afternoon, I went fishing.
After doing our best to help our friends in the Bahamas who are dealing with the horrors and devastation wreaked by Hurricane Dorian, I took a break.

Yesterday was beautiful. A light overcast shrouded the river. The air was warm and still. I slipped into neoprene socks, wading boots and a pair of quick-dry pants stiff with mud from my last outing. I secured my chest pack and nudged my backpack with water, lunch and camera into its familiar spot. I took off and quickly arrived at the first of three long glides on this section of river.
I always check this slick for rising fish. If I see one or two rises, I switch flies to the appropriate hatch and scoot down the bank to begin what is often a futile quest. The browns that prowl these slicks are big, usually more than 20 inches and they are very wary. 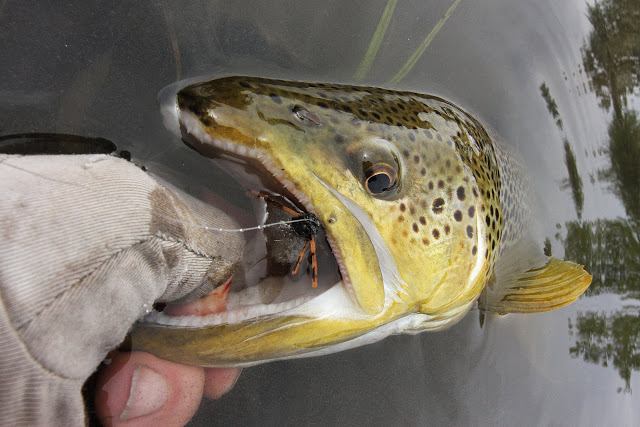 I walked behind the dense curtain of streamside willows and Russian olives to a point where they parted.  Here I could get a good view of the slick. I immediately saw a few rises and then, as if by magic, a dozen or more fish began an intricate dance. Weaving in and out of each other they competed to pick small mayflies off the surface. As I watched, I could see some were eating emergers and only bulged the surface while others poked their snouts up and out to delicately slurp a floating dun. I watched transfixed. All these fish were 18-22 inches. I had never seen anything like this on this river. Every fish from a few hundred yards up and downstream had to have traveled to this spot to assemble at this breakfast bar. 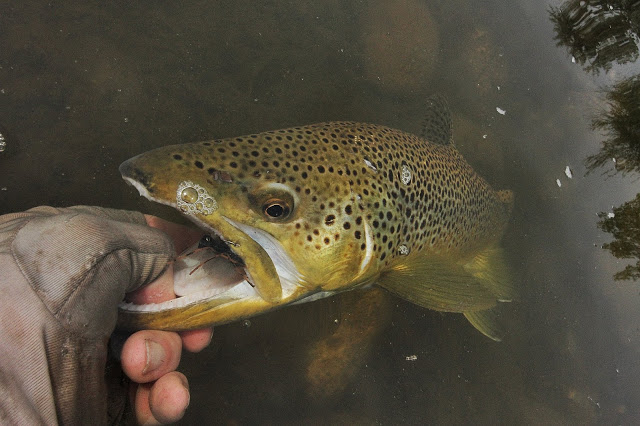 Then, behind the last willow tight to the bank I saw him. This guy had a huge kyped jaw and was unenthusiastically nibbling on a few of the tiny duns. Were these small bugs not enough food for him to bother with? He seemed very disinterested. I had put a black chubby on at my vehicle and thought he might go for this big meal. I unclipped my fly and pulled on it slowly trying to clear a bit of line. As my arm moved, he immediately turned and moved downstream. Soon he was out of sight behind the willows and Russian olives.
I froze. He was probably watching me.
If he came back to his original lie, I thought I had enough line out to make a 12-15 foot toss. I stood still for a few minutes and he slowly finned back upstream to slurp a few duns at my feet.  I was no more than 10 feet from him now. I tossed the fly with my wrist hoping for minimum motion. The fly hit the water and he outraced two 20 inch browns to inhale the back chubby. I struck and he headed down and into the Russian olive root ball. I dropped on my butt, slid down the bank, banged into the water and half fell, half ran to reach a point 15 feet from the bank. I pulled hard yanking him from the root ball. He jetted downstream leaping repeatedly. I worked him back upstream and was eventually able to land him. He was almost 24 inches... just a quarter under so I'm going to round him up. I kept him wet to get the photos, pulled the fly and released him. I was thrilled as I watched him glide vigorously away. I sat down on the bank. 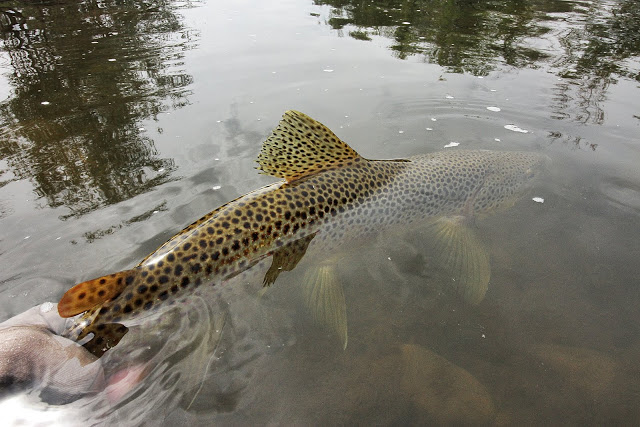 "Wow, that was the coolest start to any day I've ever had."
I had been fishing for 15 minutes. I could have quit then and there and been totally happy. I did not.