One of Those Rare Days

To refresh your memory, in my last post, I'm in north central Wyoming fishing on a lesser known stretch of the Bighorn River. And, as previously reported, my companions had departed... Dan Cerven and Chad Olsen were on their way to the Billings airport. Dan was headed home, Chad would return to his full guide schedule.

I was now solo, so I chose to float a huge ox-bow. Here, I could unload my kayak at the put-in and drive my car to the take-out. Then I could walk a mile back to the put-in thus avoiding a shuttle and still getting 2-3 miles of prime water to fish. I wanted to fish a hopper, but as the morning drug on with no takes, I switched to a hopper/dropper. Still no luck...
After lunch, I reached a braided stretch and the prime hopper spots grassy banks and riffle seams bring. I switched back to my small hopper. I waded around one island with no luck. At the last small riffle just downstream of where I had started, I probed the head of a short run with my first cast. As I lost my hopper in the sun's glare, I thought I saw a head barely scratch the surface.  I struck optimistically. My line came tight with a delicious THUNK.

"Cool", I muttered as my line ripped upriver. After a careful fight, I landed a fat 20" brightly colored buck. 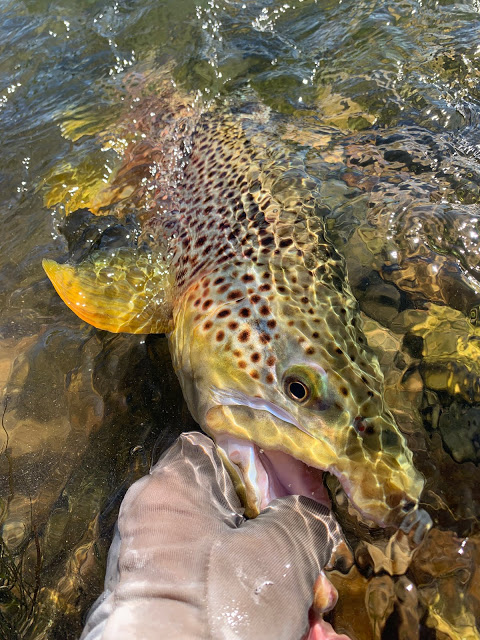 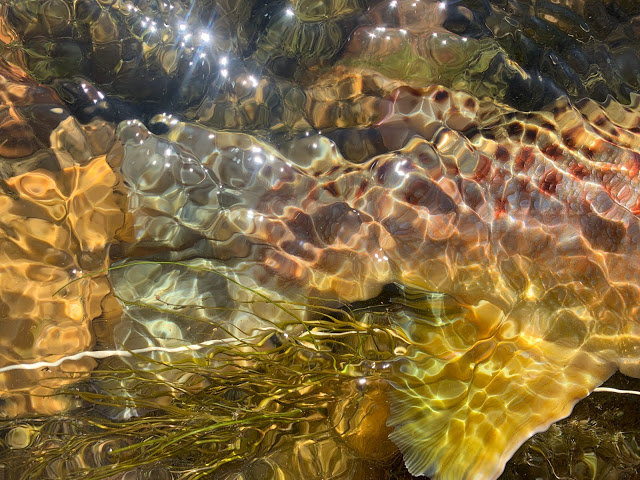 After a Cliff Bar and a slug of water, I paddled across the river to probe a very shallow, mid-river bar. The edges of this bar looked like a good holding spot for a big trout. I cast across the fast riffle water at my feet plopping the hopper on the barely submerged bar. I made a huge mend to avoid the inevitable drag that I knew would come mere seconds later. I only managed three feet of a drag free float, but that was enough. Just as my hopper was about to take off with the current, a huge 21" rainbow completely cleared the water as he snared my hopper. The take was so aggressive it startled me. My heart pounded as I struggled to gain control of the big 'bow in this heavy current. This fish was very strong and demanded all my attention as it fought hard to escape. Once at hand, the 'bow probably went 5 lbs. WOW! 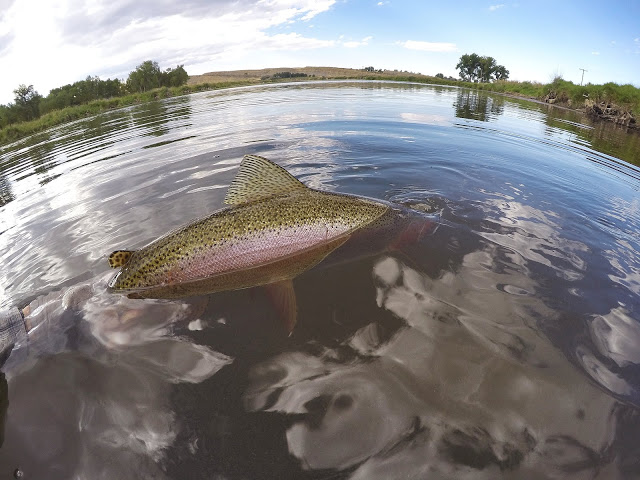 From then on my day was absurd. At one point, I texted Chad a photo of my airborne rainbow, while I was still fighting another fish. I also hooked a fish off an undercut grassy bank while I was in my kayak. I didn't want to drift past the next riffle so I put my rod handle in my mouth as I paddled to shore. The big 'bow stripped line off my reel and somehow I managed to catch the fish without breaking off a tooth! This was pure luck and a bit stupid... but it did work and the next riffle did produce!. 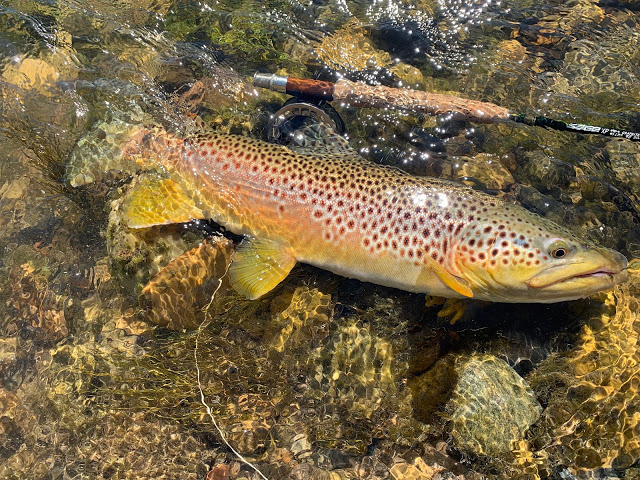 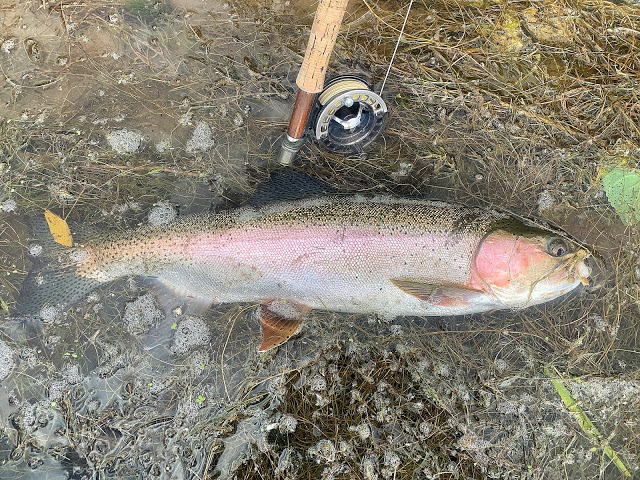 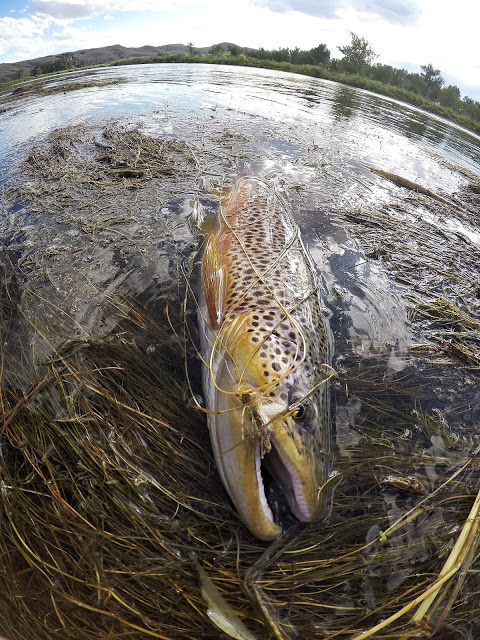 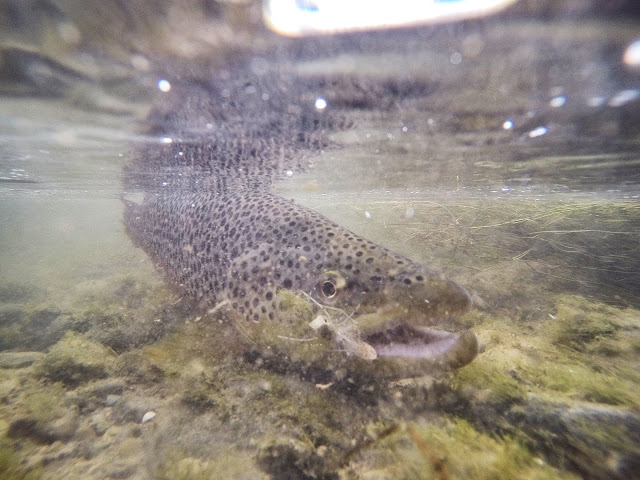 As I worked the runs on the way to the takeout, I hooked fish after fish... all big, all on hoppers. I had one of those days you dream about. I probably hooked 20 big fish and landed 12-14. I really don't know, but I do know it was a damn good day! Finally I just quit...
When I hooked a big bow in 2 feet of water exiting a tiny side channel I knew it was time to stop. The bow jumped at me feet and went 21 inches. It was time to stop, best to avoid gluttony... it builds good fish karma. 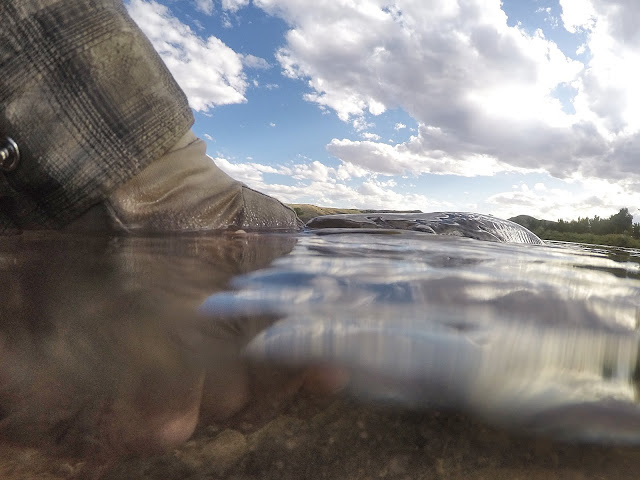