Back to top
Acklins Island, Bahamas Nov. 2-9, 2019 PART TWO
The fishing on Acklins Island is a dream come true especially for the angler that loves to wade. The flats are expansive, varied and prolific. Many, if not most, of the flats are hardpacked sand or solid marl. Mangrove flats, dazzling white beach flats, crushed coral, grassy bays and extensive creeks create a spiderweb of perfect bonefish habitat. Depending on the tide, the fish are either "way in" or on the outside looking to make their way in. Sometimes it takes a bit of time to find the fish and sometimes the wind and water temps can conspire to make this job more difficult. But, in the end, the fish are there and that is all we can really ask for. 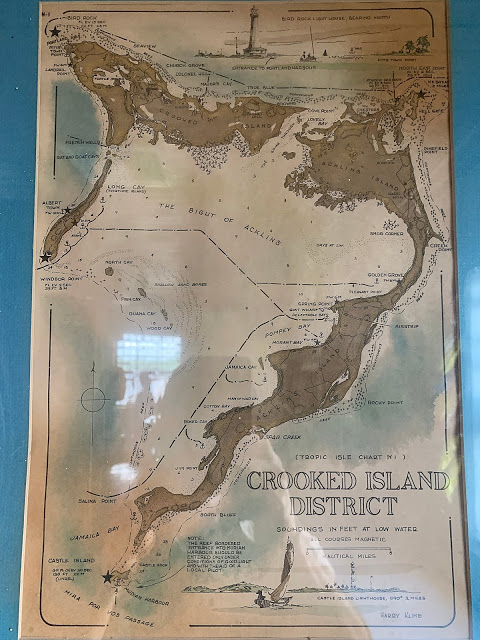 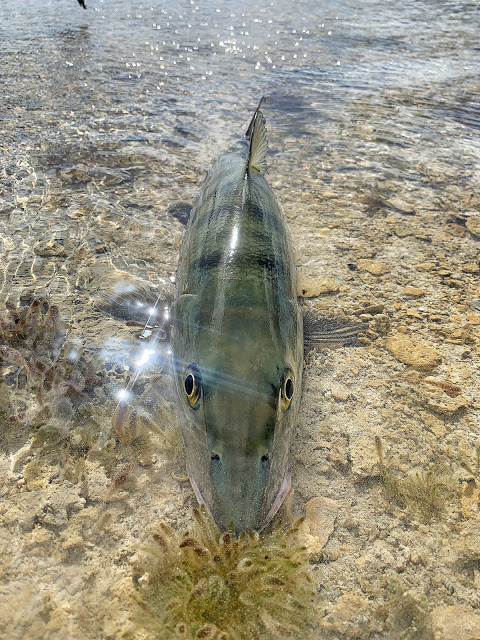 Some days, everything works. Everywhere you go you find fish, everything you do is rewarded. 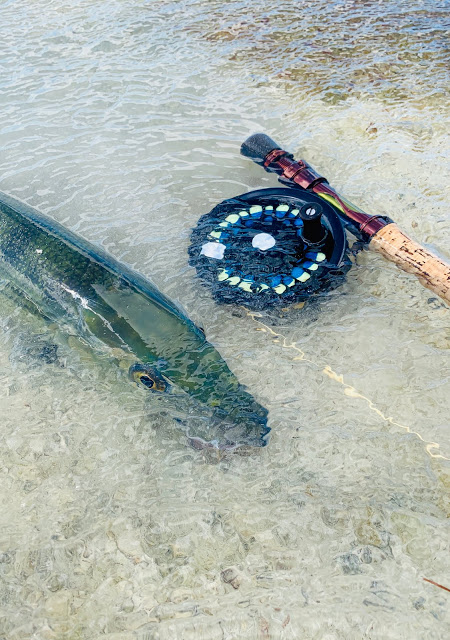 On this our second full day, I was fishing with my old friend Steve Peskoe...
After bailing out of the skiff, Steve waded off with Reno, our guide today. I took the deeper beat veering towards a channel that cut into the island's interior. Within two minutes, a fish came out of the channel and scarfed my #6 tan crab. It's always good to get that first fish... it takes the pressure off and one can relax knowing at least there will be no skunk today. I should not have worried. 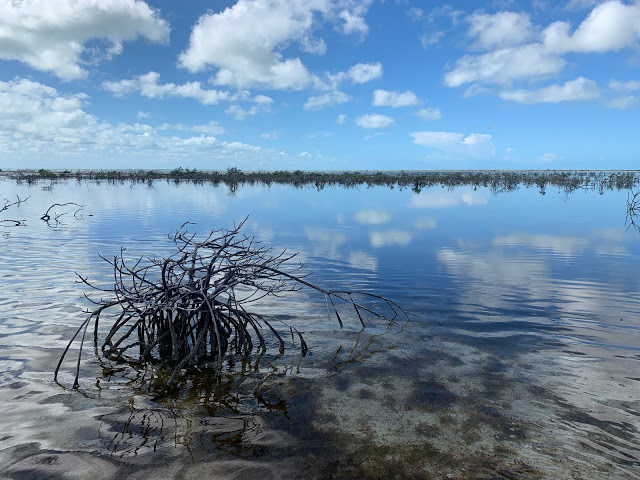 As Steve and Reno waded further and further off, I caught fish after fish often watching Steve's bent rod as I fought my own fish. By the time the tide was almost slack low, I was well into double-digits and had taken the absurd option of snapping off my hook's barb. I had attracted many sharks and grown tired of donating my fish to these aggressive sharks.

After I had lost my biggest fish of the day to a big lemon shark, and sadly watched the explosion of water followed by the red stain, I said "enough is enough". I spent the rest of the morning casting to bones with a fly with no hook point. I tried completely cutting off the whole hook, but I got no part of the run so I went back to just cutting off the hook point on my flies. It was an amaxing experience and many times, I could get a 20-30 yard run before the fly would come pull free. 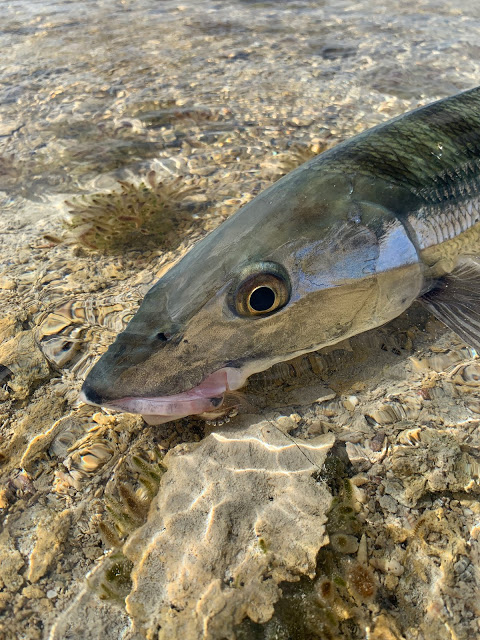 When I thought it was just about time for the tide to turn and start coming back in, I slogged through the soft mangrove-dotted center of our long islet to fish the lee. If the wind hadn't been blowing so hard, I would have been sweating by the time I reached the far side. But instead, I was just leg weary and a bit dehydrated. I dropped my pack, took a swig of water and hoped to see at least one tail as a reward for my recent mud sucking, hamstring burning effort. 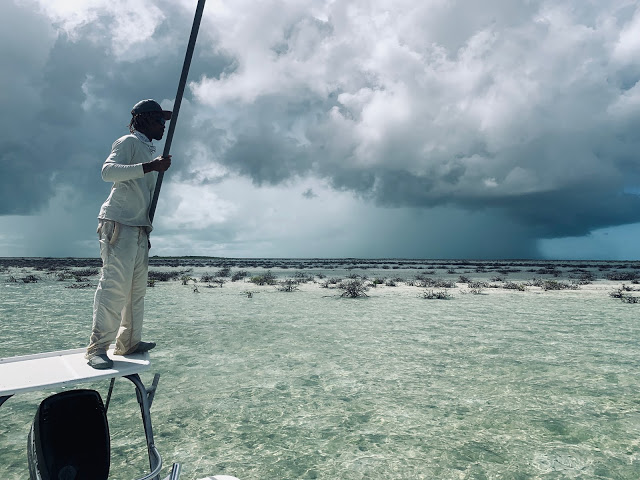 Again, I should not have worried...
As I searched the first small bay that was carpeted with a light brown grass mat, a tail popped up. A small lemon shark cruised between me and the tail.

I kicked hard at the shallow water and the shark jetted away. Unbelievably the bone just kept on tailing. He rooted, then move a foot, rooted again and so forth.

I threw a small Milheve's Flats Fly and he dashed three feet to inhale it. I stripped once and the bone blew-up. In this shallow bay, his flight threw up a huge rooster tail as he sped away. I soon unhooked the fish and marched to the next small bay. Here, three bones were having a tail fest. They rooted, elbowed each other out of the way and completely ignored me. They were only feet away. I watched enthralled...

"This almost seems too easy", I thought.

Usually, bonefish are very wary when tailing, but this trio was so involved with each other they allowed me to make two really bad casts without altering their behavior one bit. On my third cast, I got it right and one of the boys beat the others to my fly. We were immediately off and running. So very cool!
As the tide flooded in over the next hour and a half, everything was perfect. Every small bay held at least one tailer... and every one ate. It just doesn't get any better than this. By the time the tide had gotten up into the mangroves.. along with the fish... I decided it was time for a late lunch. It's always good to walk away from fish when you are sated. Gluttony builds bad karma and I needed to save some of this luck for tomorrow. It worked! 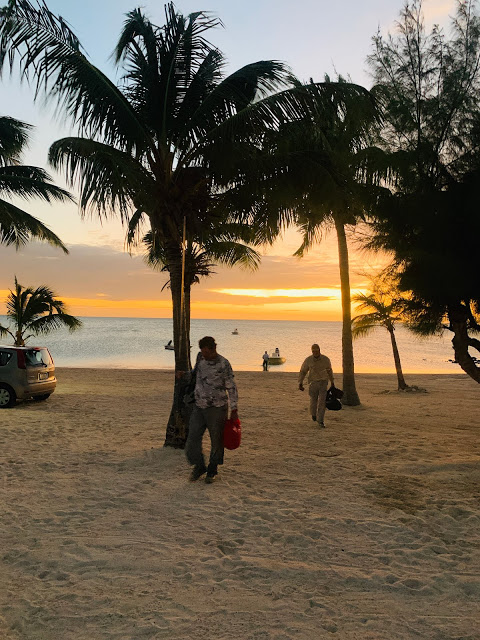 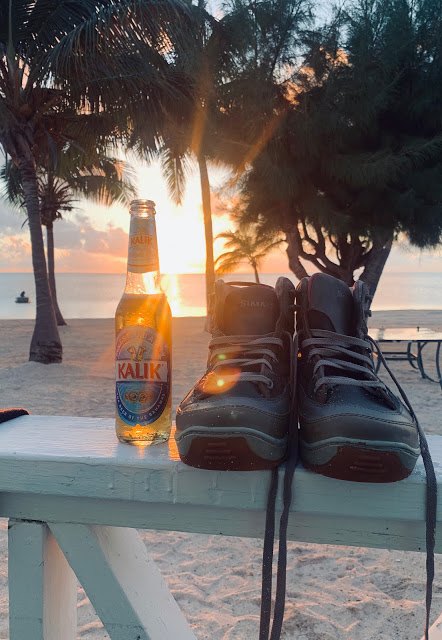 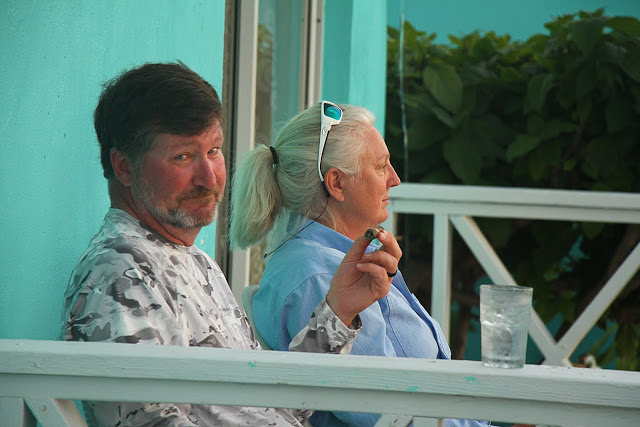 Our trip was truly excellent. The accommodations were way better than expected. The room's amenities were terrific, but what really set the accommodations apart was the view. Having a drink on the back porch as the sun set in the west was truly a spectacular experience.

And the food... wow! Bernice, you did an amazing job. From lobster pasta, to conch salad made with apples and local hot peppers, to a baked grouper any New York City restaurant would be proud of, we ate like kings. 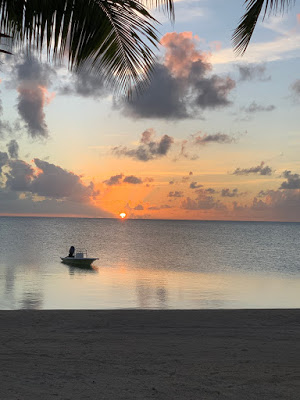 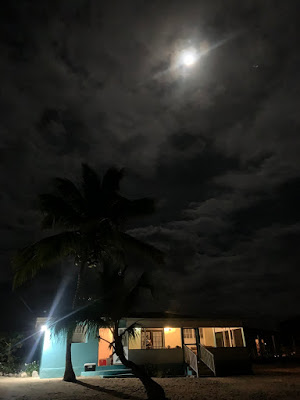 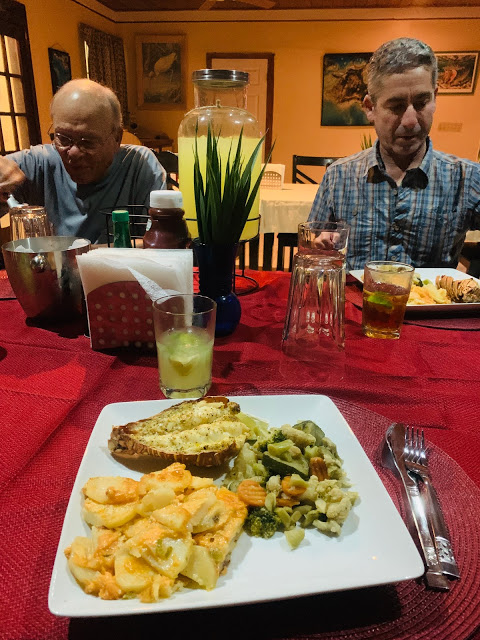 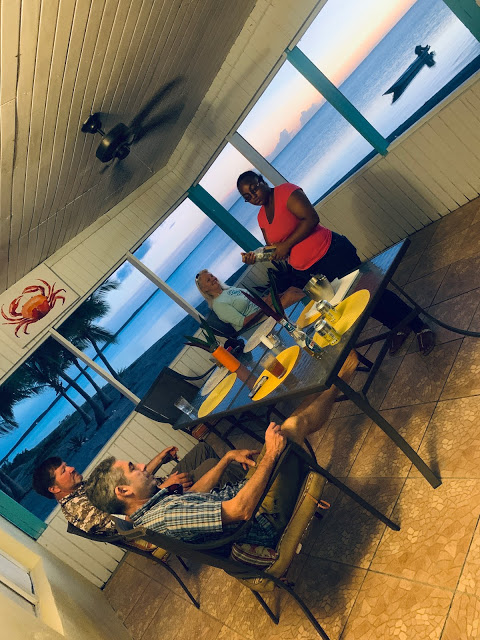 The service was great too. Rooms were thoroughly cleaned each day, fresh towels were placed on the bed each afternoon and the mini-fridge was restocked with water while we were fishing. This outstanding service made coming home each day a pleasure. Ney and Julia were excellent and took care of our every need. They fetched ice, were very attentive during dinners and were a pleasure to be with. 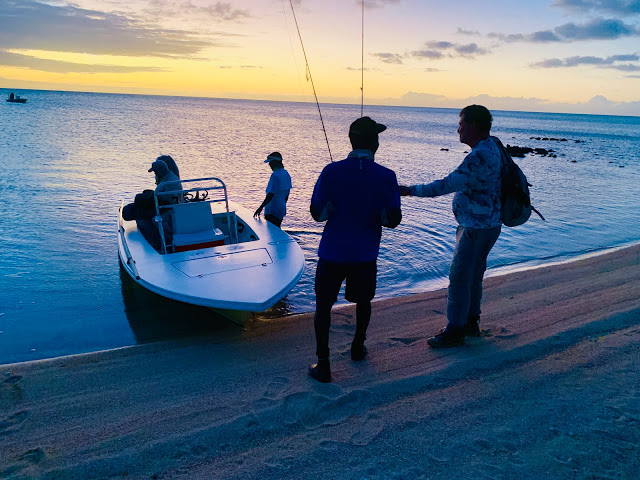 The guides also did a great job. Thanks to J.J., Reno, Jarvis, Fedel and Junior. When the fishing was good, you fellows made it better and when the fishing was slow, you worked hard to get us in the game. We look forward to fishing with you guys again!

Regarding boats, the lodge has in their fleet a 16' Maverick with a 70 h.p. Yamaha 4-stroke, an 18' Maverick 115 h.p. 4-stroke Yamaha and a 17' Hell"s Bay 70 h.p. There is also a 16' Carolina Skiff with a 40 h.p. 2-stroke Yamaha. And perhaps the most exciting news is the lodge will soon have a 30' Grady White with twin 350 h.p. 4-stroke Yamaha engines. This boat will be used for snapper and bluewater fishing. More on this soon. We will put these details on our website. 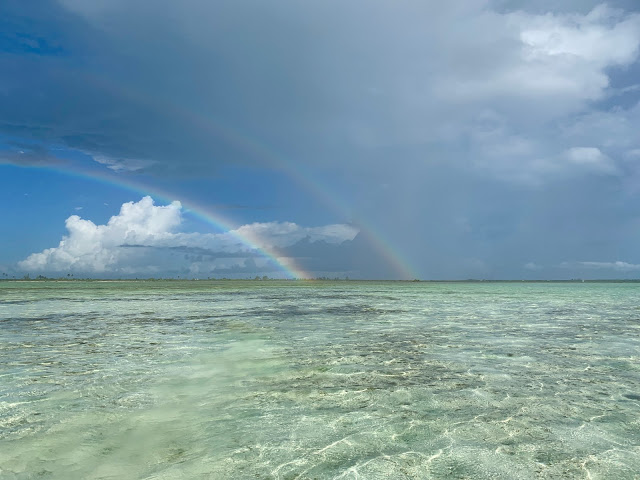 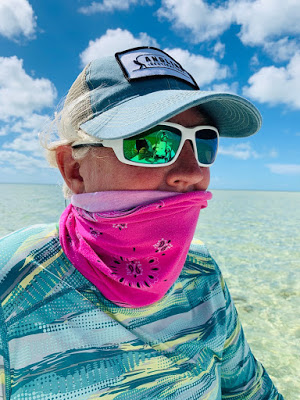 And finally the fishing. Crooked/ Acklins offers some of the best wade fishing for bones in all the Bahamas. It is also a surprisingly good permit destination. As guides learn more and explore further afield, more and more permit are discovered... and sometimes even caught (Congratulations Howard!). 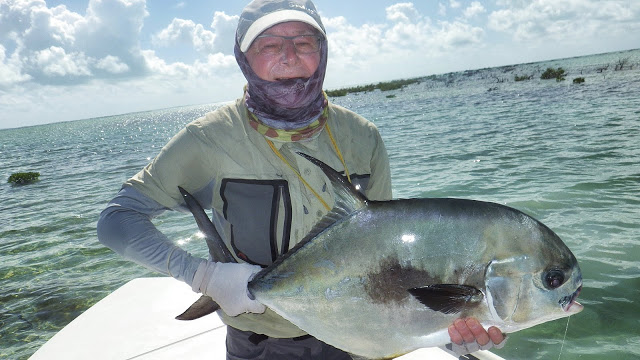 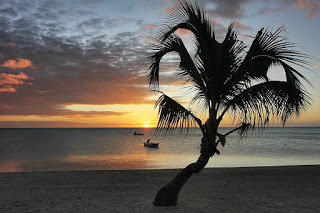 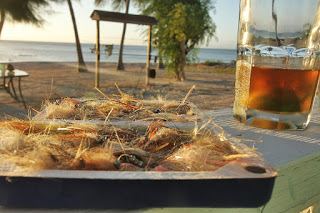 But let me say this in conclusion, at $2995.00 for 7 nights with 6 days fishing for the basic bonefish package, this lodge offers one of the best opportunities in the Bahamas. I would be more than happy to turn around and go back... right now!