On this, our fifth day of fishing on Brazil's Agua Boa River, Doug Jeffries and I took off upriver with Joseph, the head guide. I've shared some great days with Doug over the years including many trips to the Bahamas, Belize, the Seychelles and, without a doubt, the best tarpon day ever in the Yucatan.

Doug and I stowed gear and attached telephotos to our cameras as Joseph pulled away from the dock. We were the first group to depart today which meant we had the best chance to see animals. We wanted to be ready. As we motored upriver we saw capybaras and otters, as well as many species of birds. The Amazon always puts on a display. 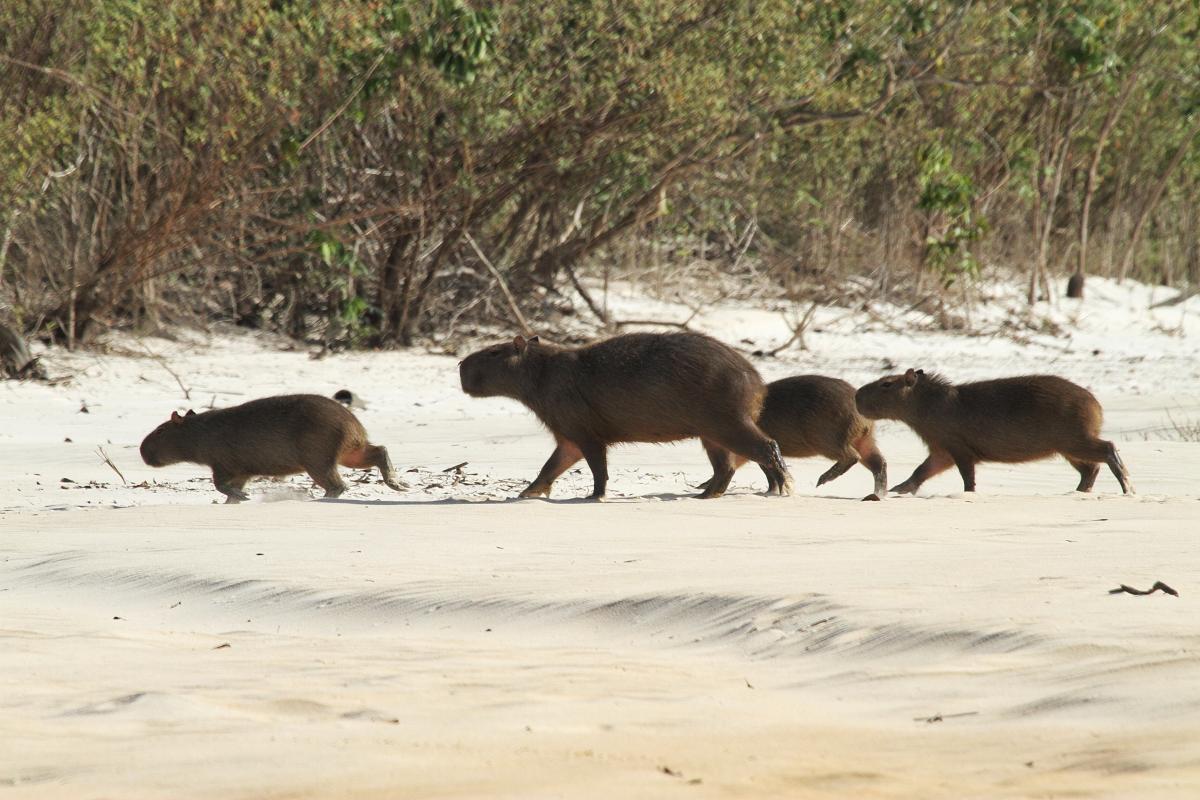 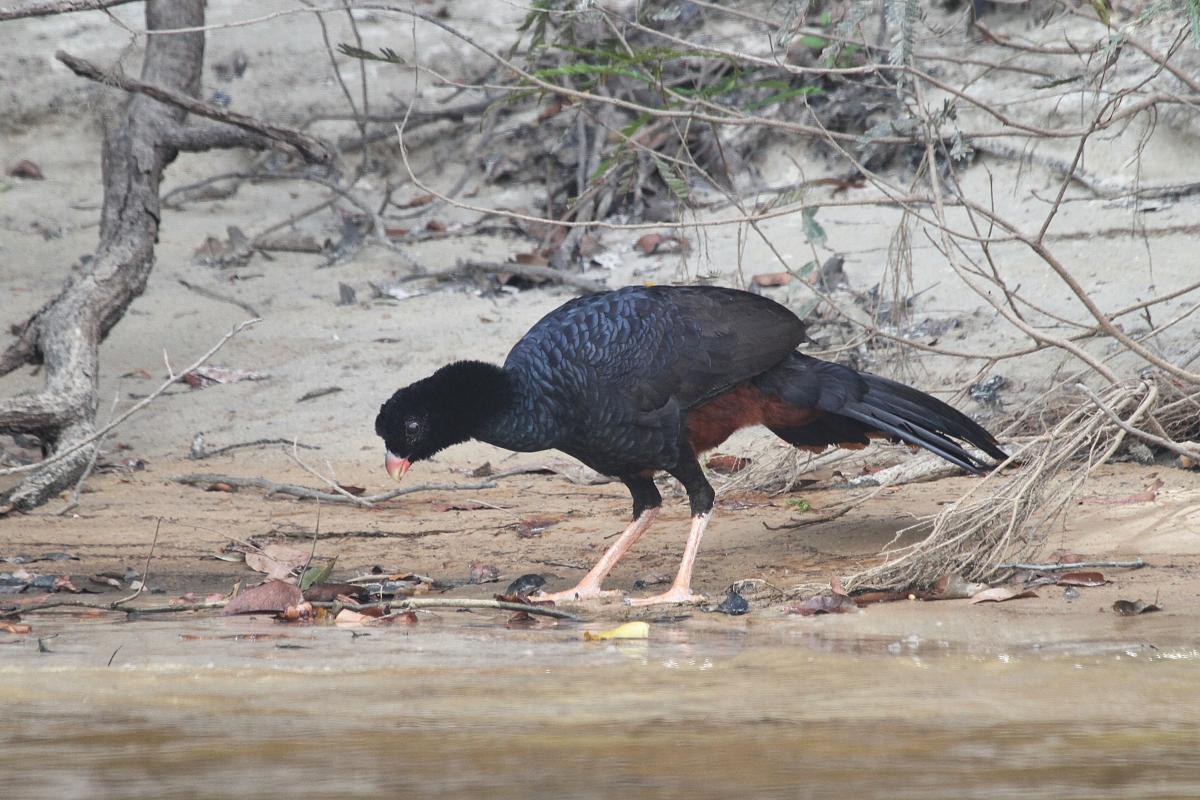 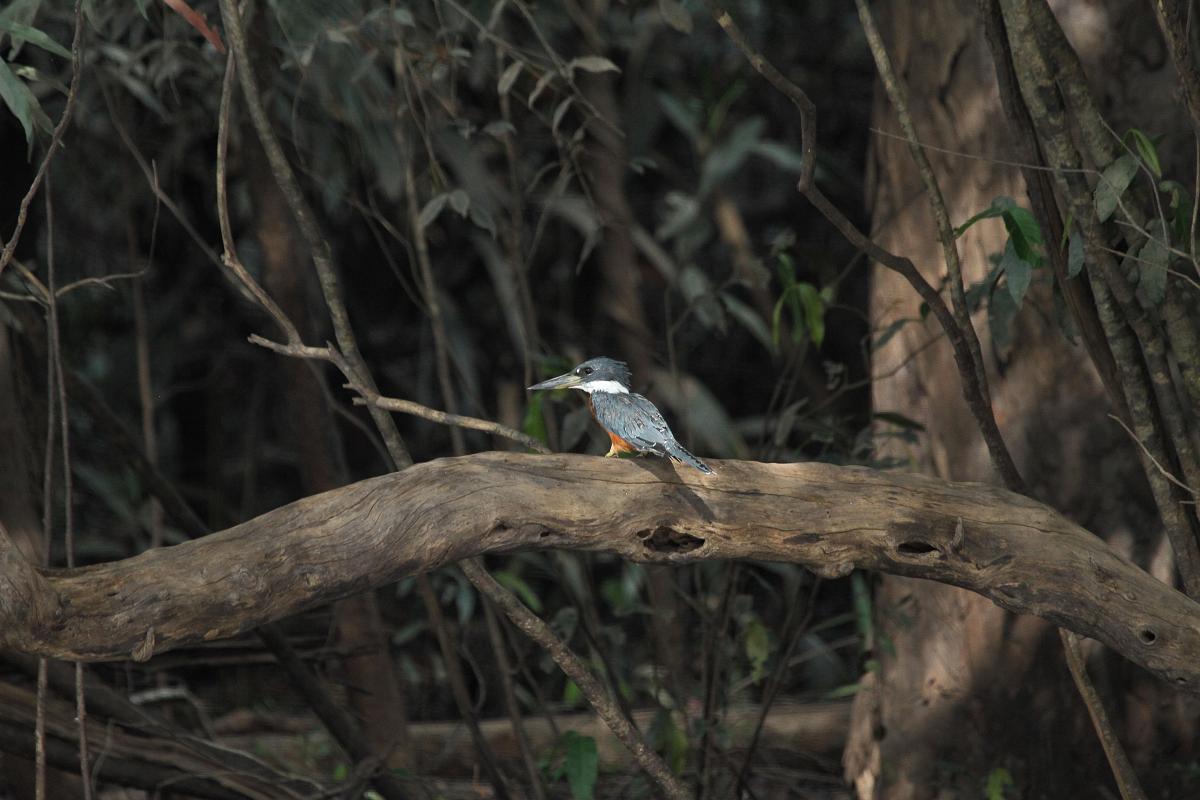 After a half hour, Joseph shoved the motor's handle to the left and we glided to a stop under the canopy where a small stream slithered out of the jungle. Joseph moved to the bow and armed himself with a machete and a paddle... both homemade. Hacking and paddling, Joseph soon reached a lagoon, motored to the far side and told us to get out and walk across a sandy spit sprinkled with saplings to reach him and the next lagoon on the other side. It was a beautiful day, if a bit windy. We could hear Joseph hacking away to our right coaxing the skiff up a narrow channel to reach the next lagoon. We were already there... so in the meantime, we waited checking out the many tracks in the sand. 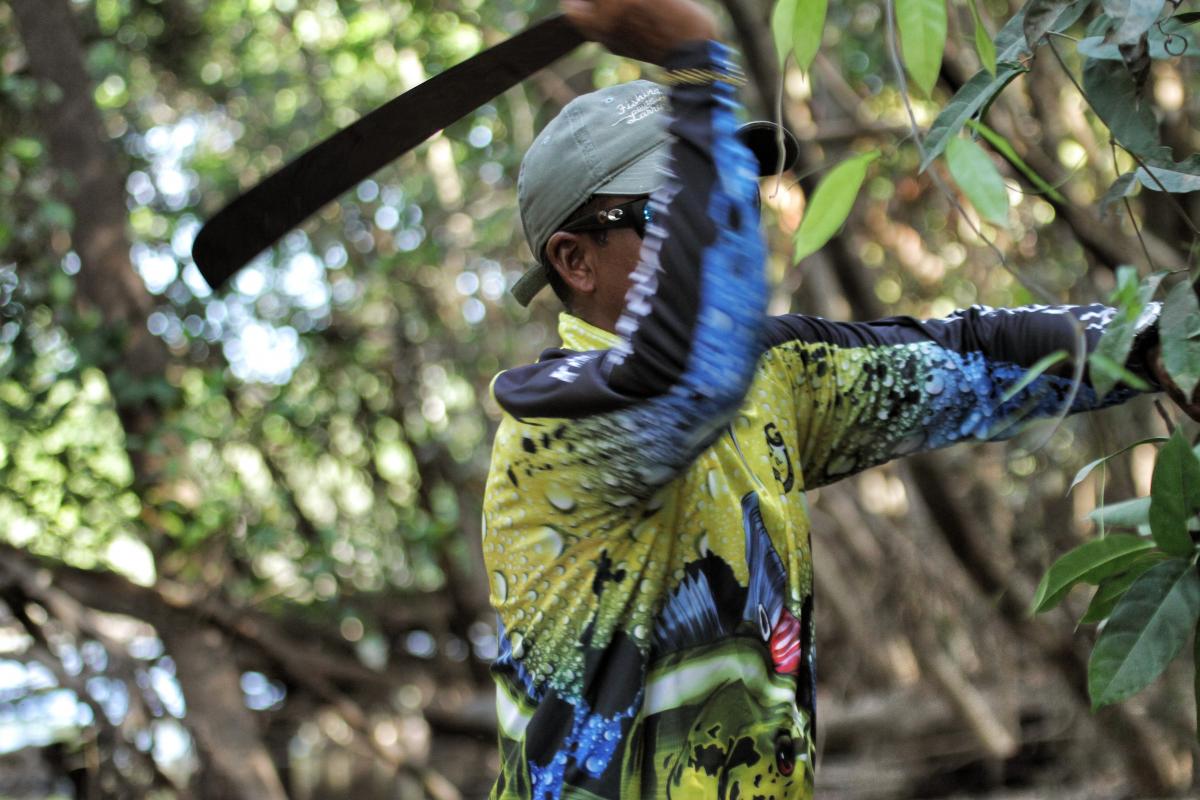 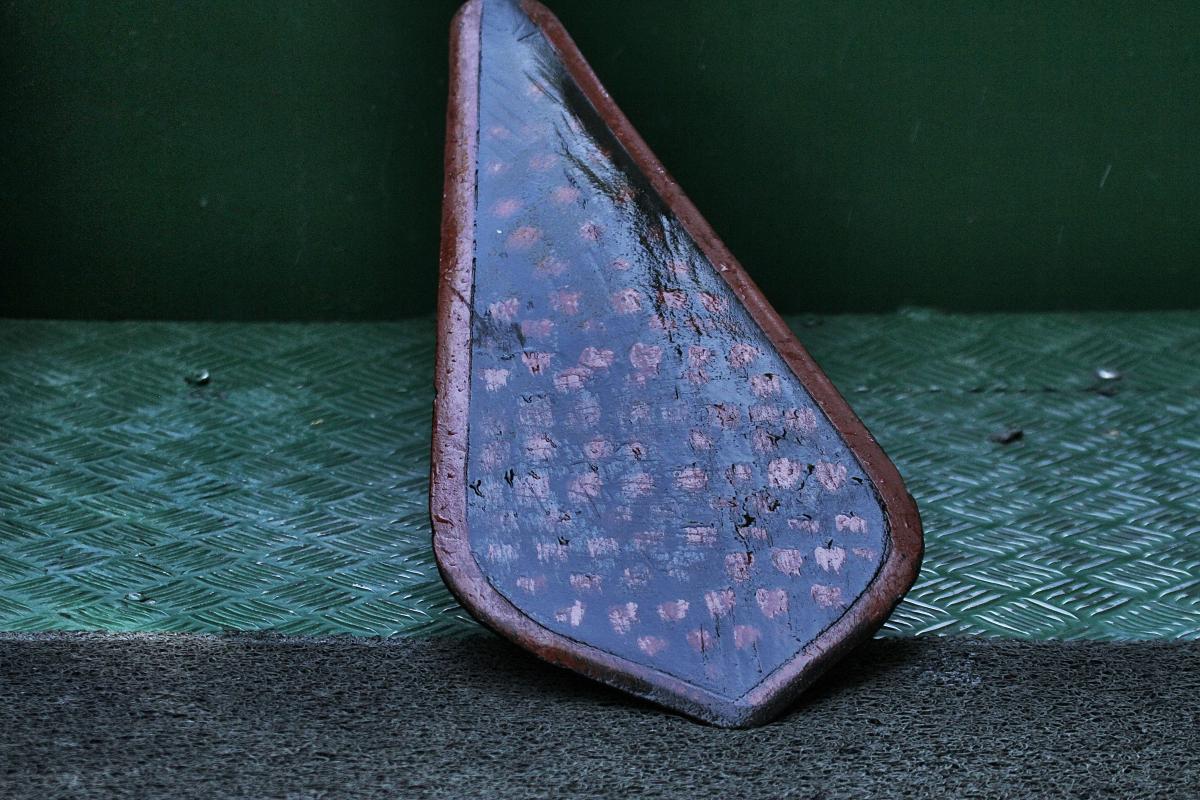 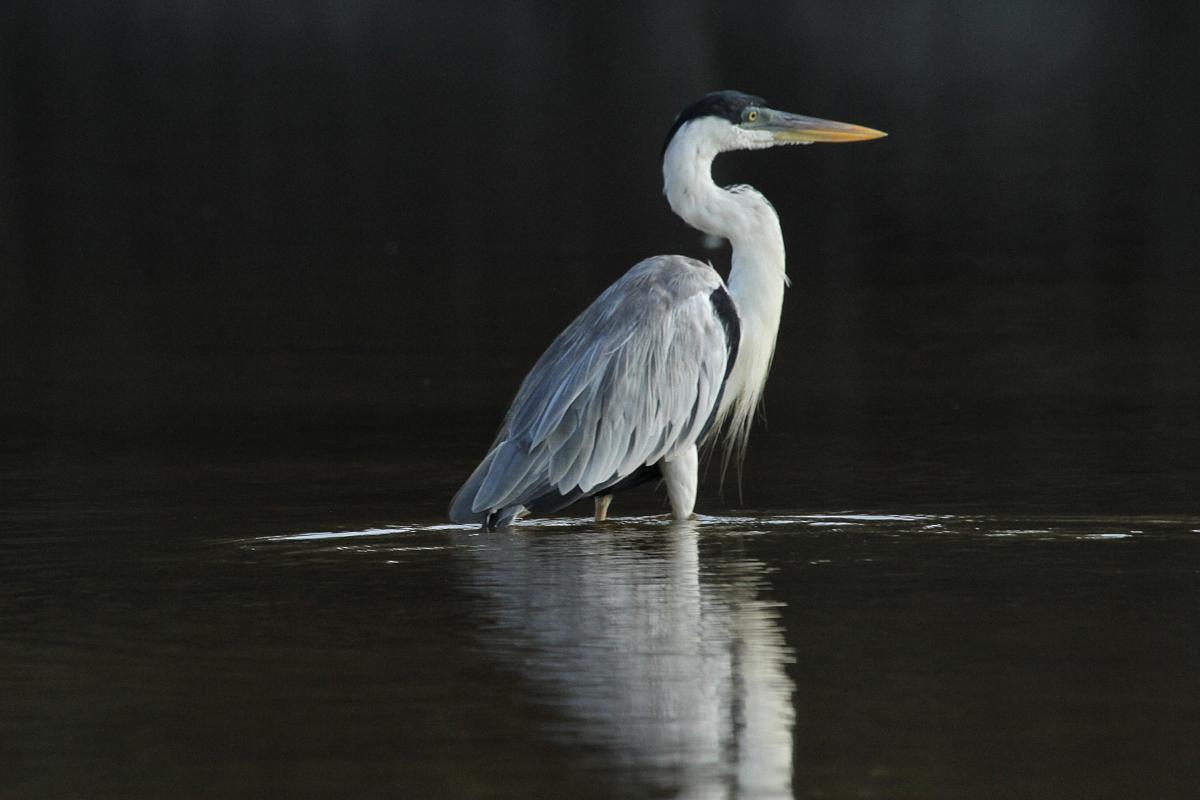 In an ever freshening wind, Doug and I jumpd in the skiff. Doug took the bow and in his style, had a 10 lb. peacock boated in the first 10 minutes. Now it was my turn. I should stop here and explain what it is like to fish with Joseph. Although usually patient with less skilled anglers, once he gets someone on the bow that has a modicum of skill, Joseph goes into Fuhrer mode. If you take his Hitlerian side seriously and your feelings are easily hurt, it will be a long day for you. I've known and fished with Joseph for many years so I knew what I was getting into today. I've always felt his skills as a guide override his impatience and at times, heavy handed comments. Let me give you an example: 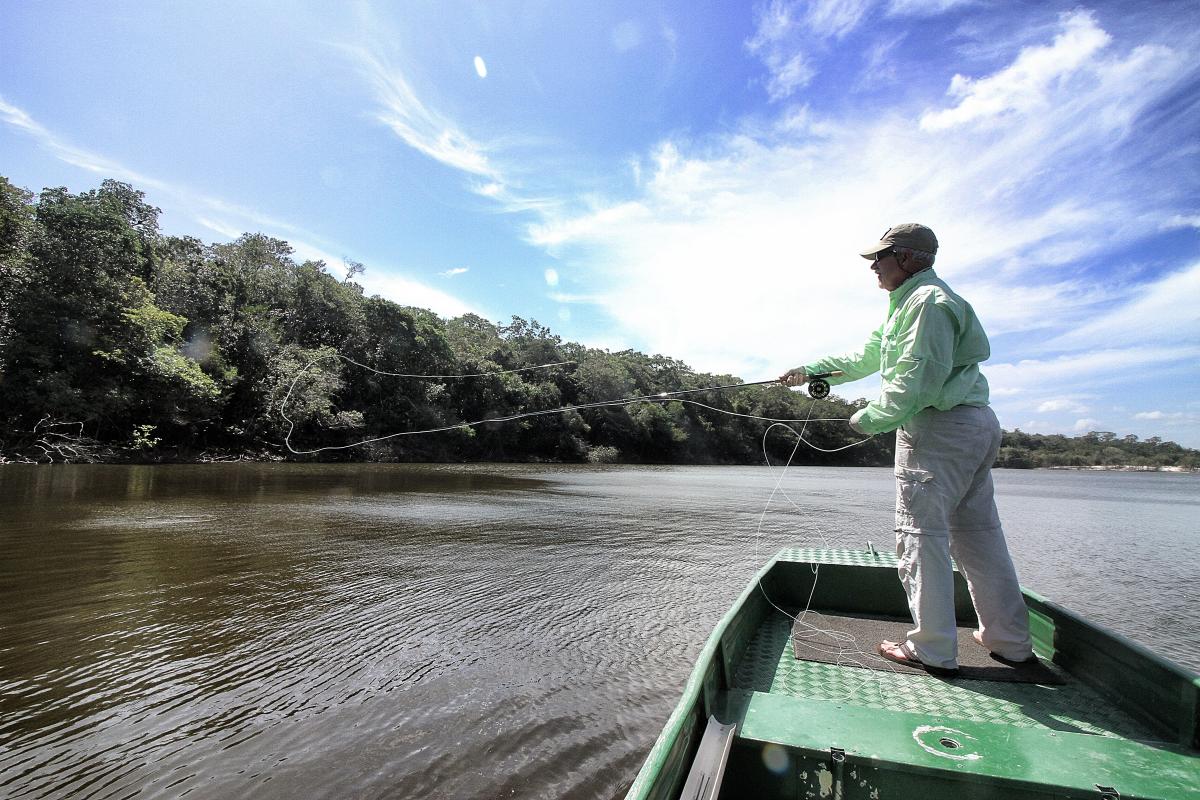 On this morning, I was relaxed and not feeling like I really needed a big fish... I was looking around and enjoying the sun and the day. Joseph would have none of it. Maybe because he was having to pole into a stiff wind, he made it clear we were here to fish and not lolligag around sniffing flowers and singing Kumbaya. I snapped to attention knowing that was the least I could do given he was working his ass off. Of course, our best view of fish was slightly ahead of us which meant I either had to cast into the now very strong breeze or try a shot perpindicular to the wind and adjust my cast allowing for windage. I would need to aim 6-10 feet to my right to put a cast at 60 feet in a hole the size of a bucket. I missed often and every time Joseph would say "more right" or "one foot left". Now I already knew this, I just was having problems accomplishing the task. As I muttered under my breath "I know, I know.", Joseph kept right on barking superfluous comments. It was like having a "Dad" chirping at your shoulder telling you to try harder. I'd been here before with Joseph. I knew it came from an excess of energy and a desire to succeed. His success meant my success so I took his comments in stride. 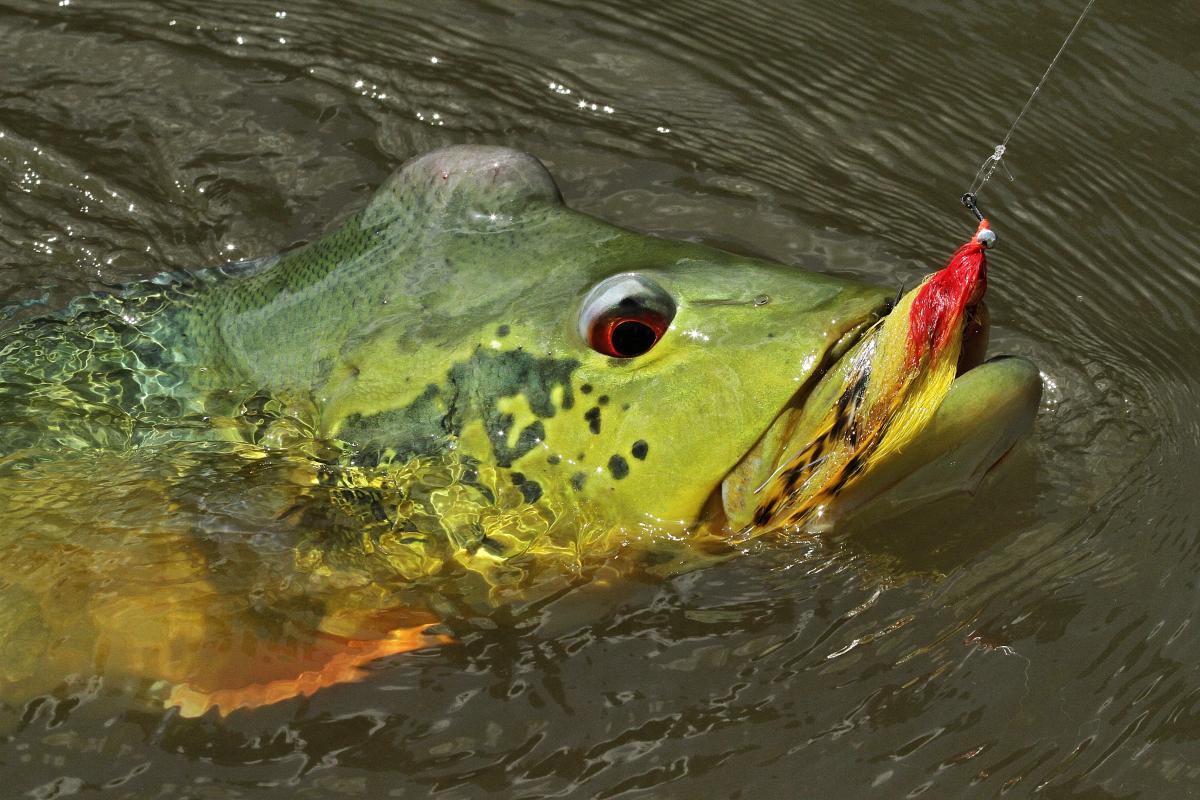 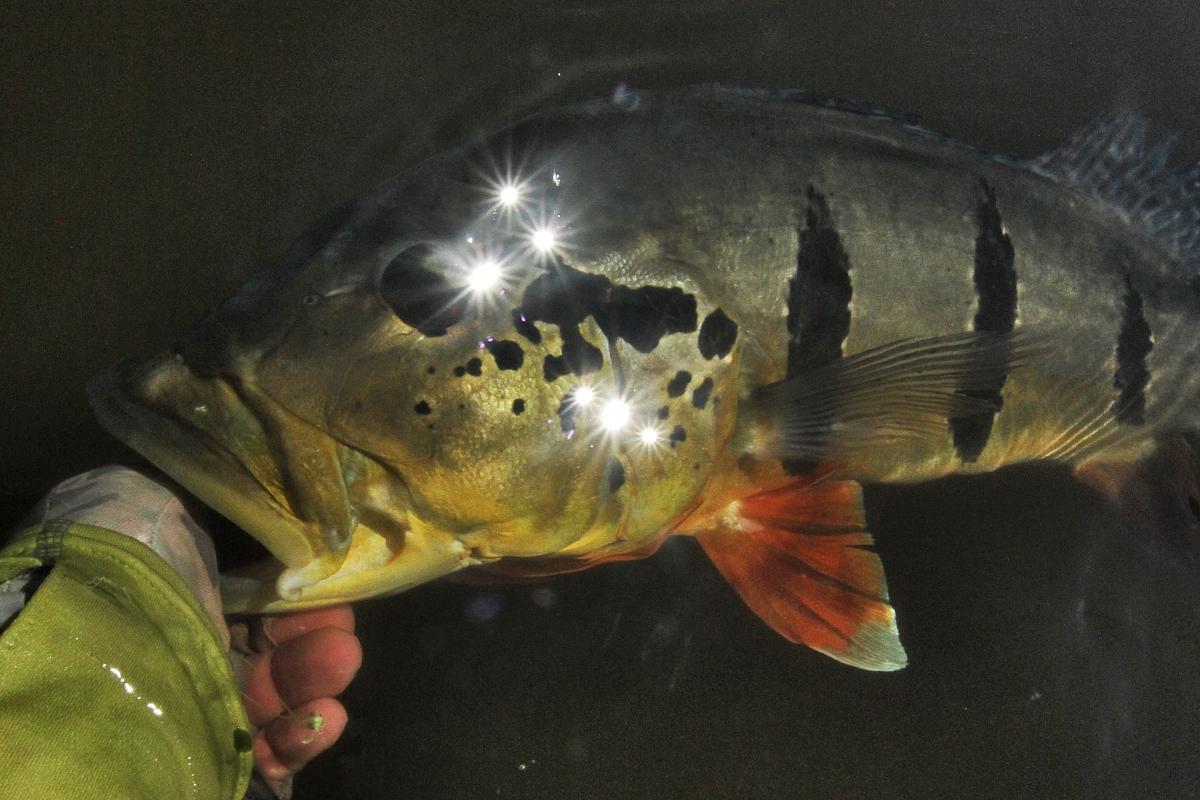 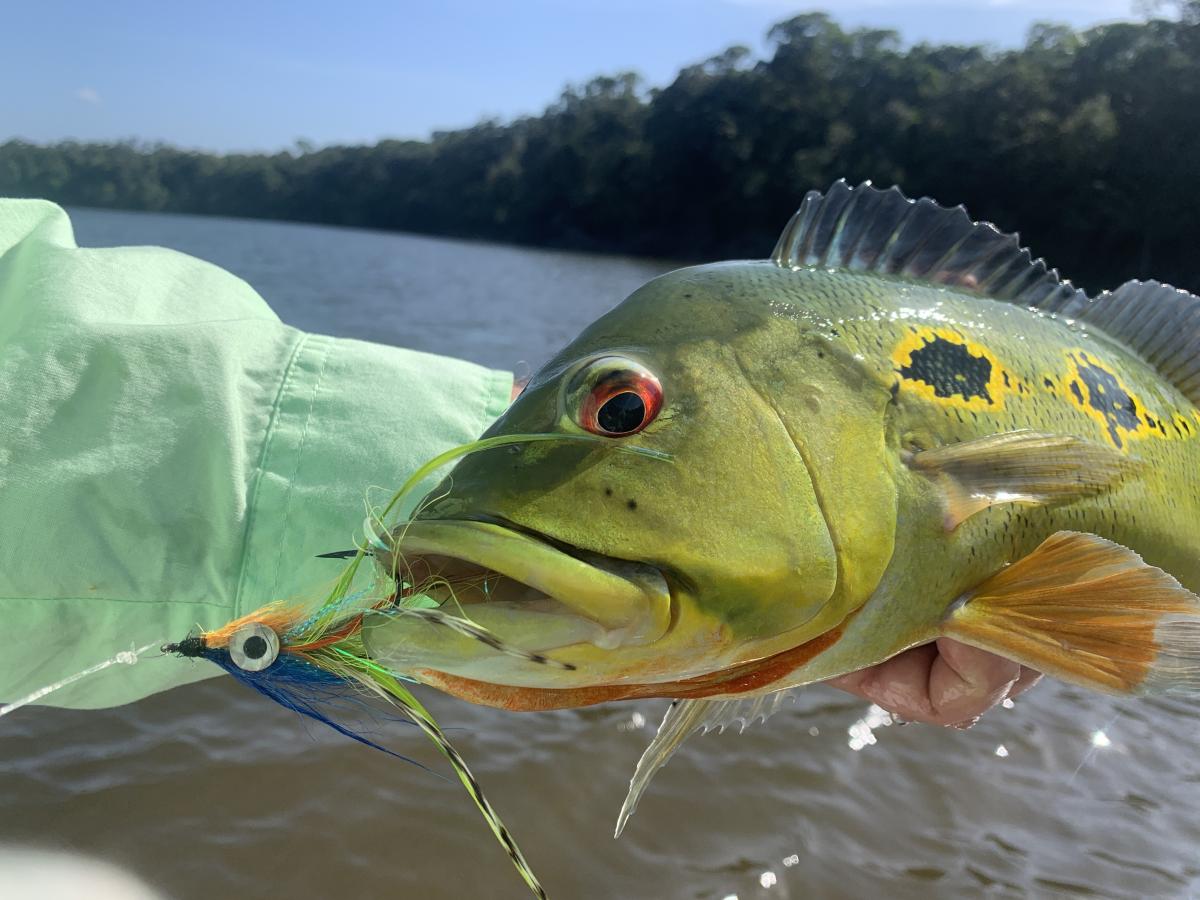 On this day, we caught plenty of these 3-6 lb. borboleta peacocks.

At one point a huge peacock surged up and out of the water to try and take my fly just as I initiated a backcast. Joseph screamed "Nooooo". I never saw the fish and I don't think Joseph did either but he was so excited, he just blurted out the very accusatory "Noooo," then added for effect "Wrong!"

A moment later Joseph then said, "See that fish?"

Joseph said "You can't see him... Oh my God. he is right there." Then he whispered "Oh my God" under his breath. 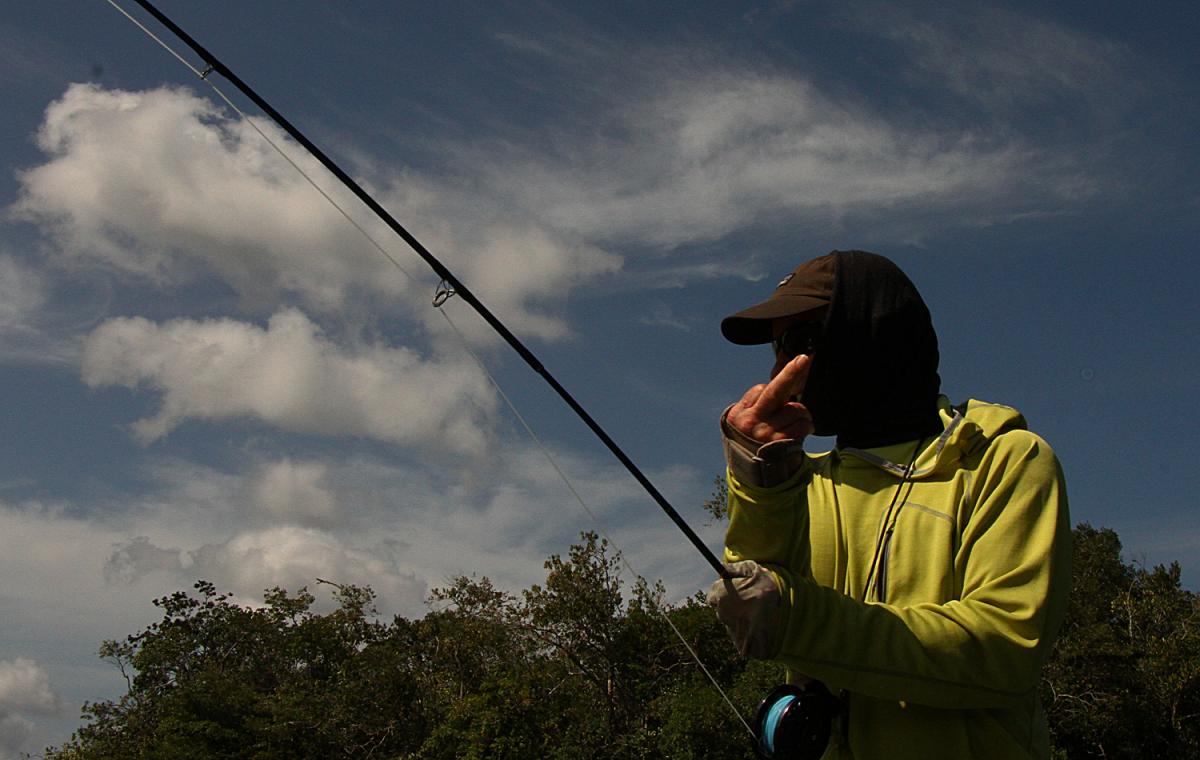 I express my opinion.

That's when Doug and I started to laugh and that was the beginning of the day's mantra "Oh my God." whenever one of us did not see one of Joseph's fish. We used this mantra to mean " My God you are an idiot." Even Jopseph thought this was funny which means he is not really a Nazi only a Type A... and he is such a good guide you just gotta let it go. In any case, I did finally catch a big peacock and over the next hour Doug and I caught many peacocks up to 14 lbs. It was very good! Even Joseph began to relax.

Soon we moved to another lagoon where we had lunch. After lunch, Doug immediately caught a huge 15.5 lb. peacock. It was a beautiful fish. He handled it masterfully. I was dialed in at this point and ready to rumble. Joseph poled deeper into the lagoon and on my second cast, I hooked something big. My strip strike went KA-THUNK in that delicious way a solid set does with a big fish. I felt a few head shakes, but I couldn't move the fish. Then all hell broke loose.

The fish took off like a big jack or a permit. I pegged my drag, but the fish kept his run in 4th gear. No pause, no typical stand and fight. When a strong wind gust pushed us near the shore, my line was then bent around some brush on the beach. I jumped out, ran past the brush, then jumped back in the skiff as Joseph had managed to get it back on track and headed my way. The fish continued it's path down the shore. I was still unable to stop it. I palmed my Abel hard as the fished reached a pile of wood and tree limbs in the water near shore. I palmed the reel harder to no avail. Of course, the fish went right through the brush then made a left into deeper water. As we reached the brush, I had to make a decision; jump out and swim under the brush passing my rod thru ahead of me... or break off the fish or... as it was now becoming quickly appparent, break my rod. I made the least adult decision. I jumped into the yet-to-be-determined depth of water, ducked/swam under the brush thrusting my rod ahead of me. At the same time, Joseph grabbed my fly line and held tight until I was through the brush. 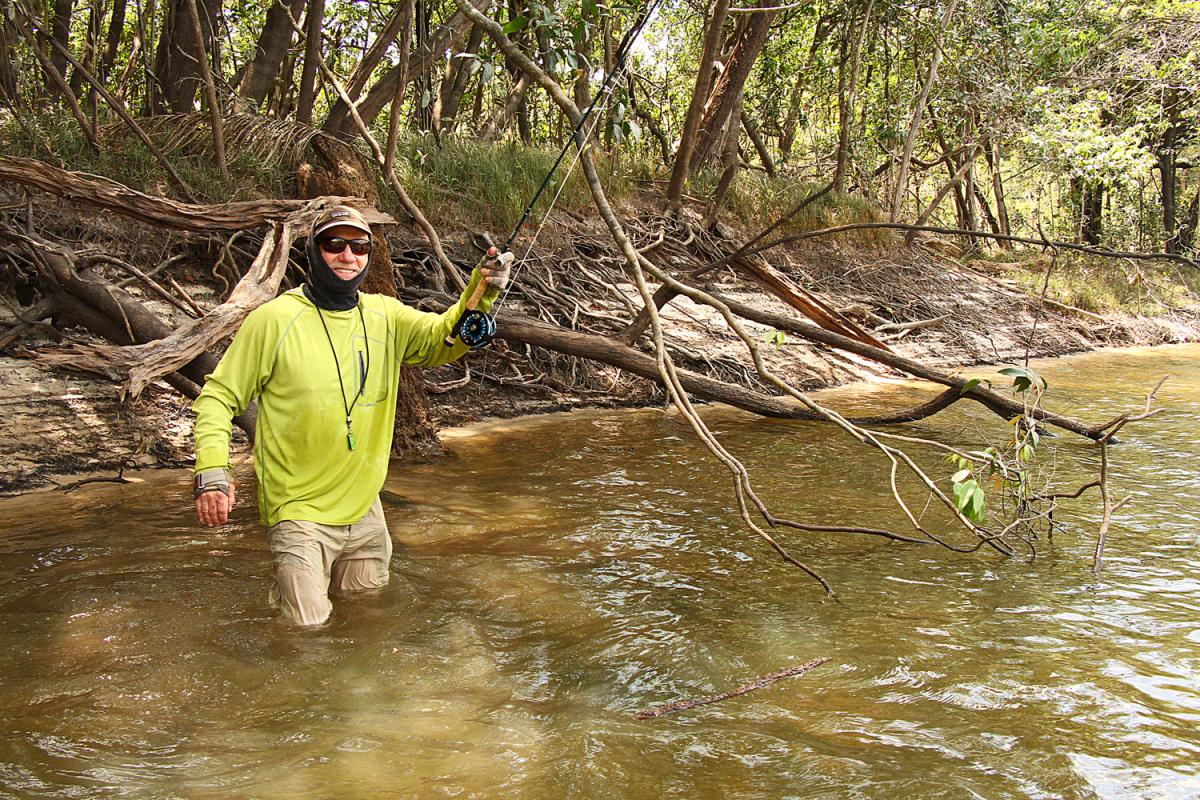 We saved the rod and landed the fish. I got a little damp in the process. 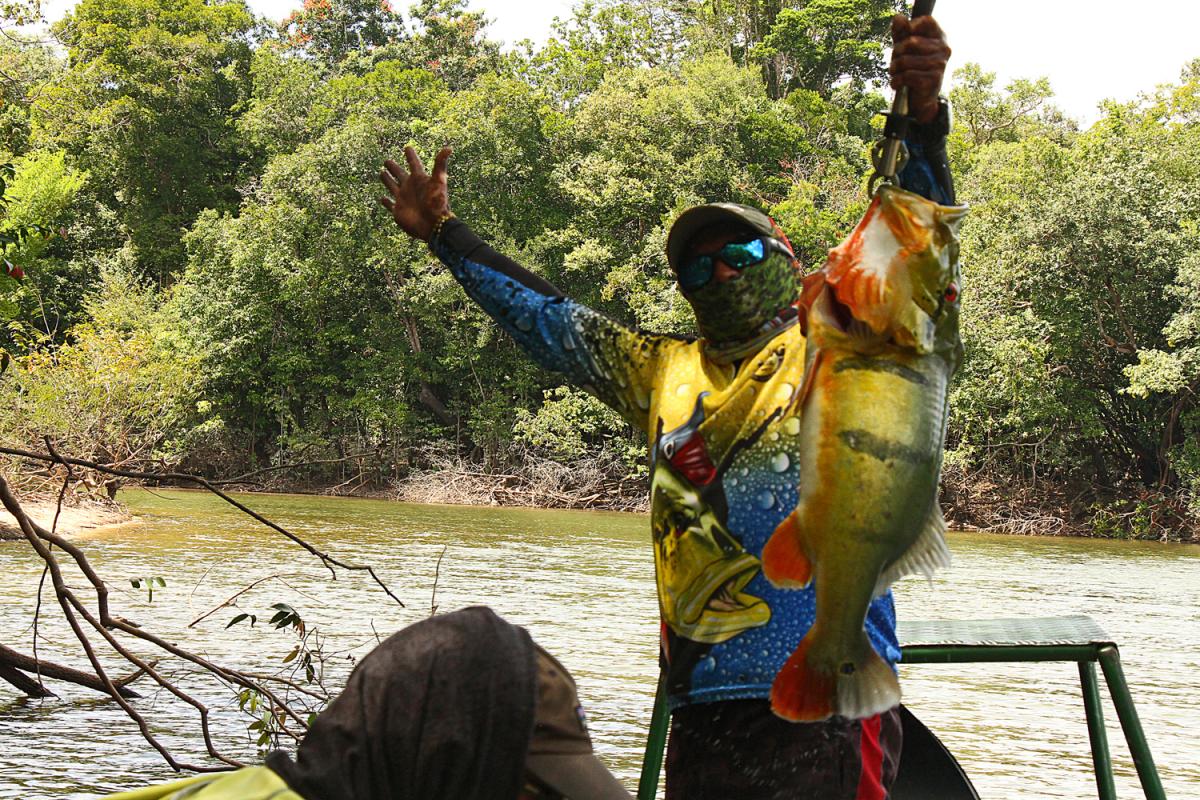 Joseph celebrates! You can see the brush to the left and beyond that, the point I hopped around to clear my line. 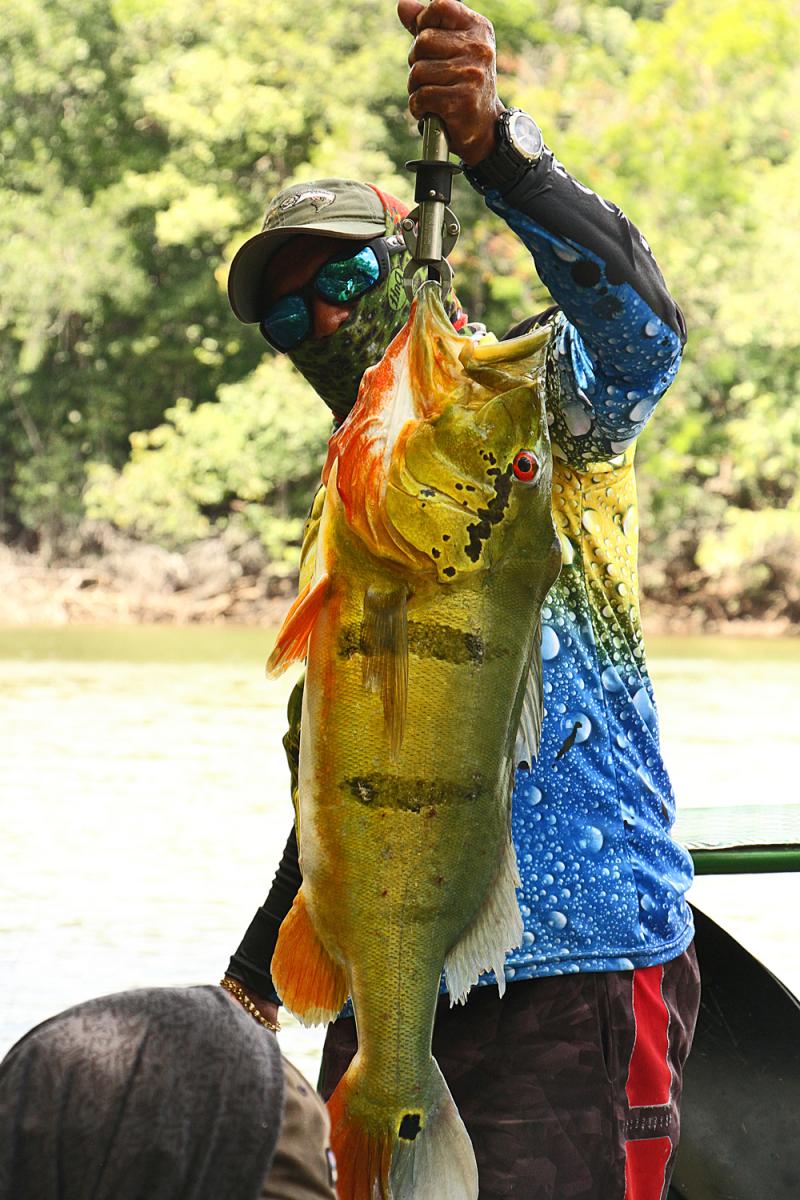 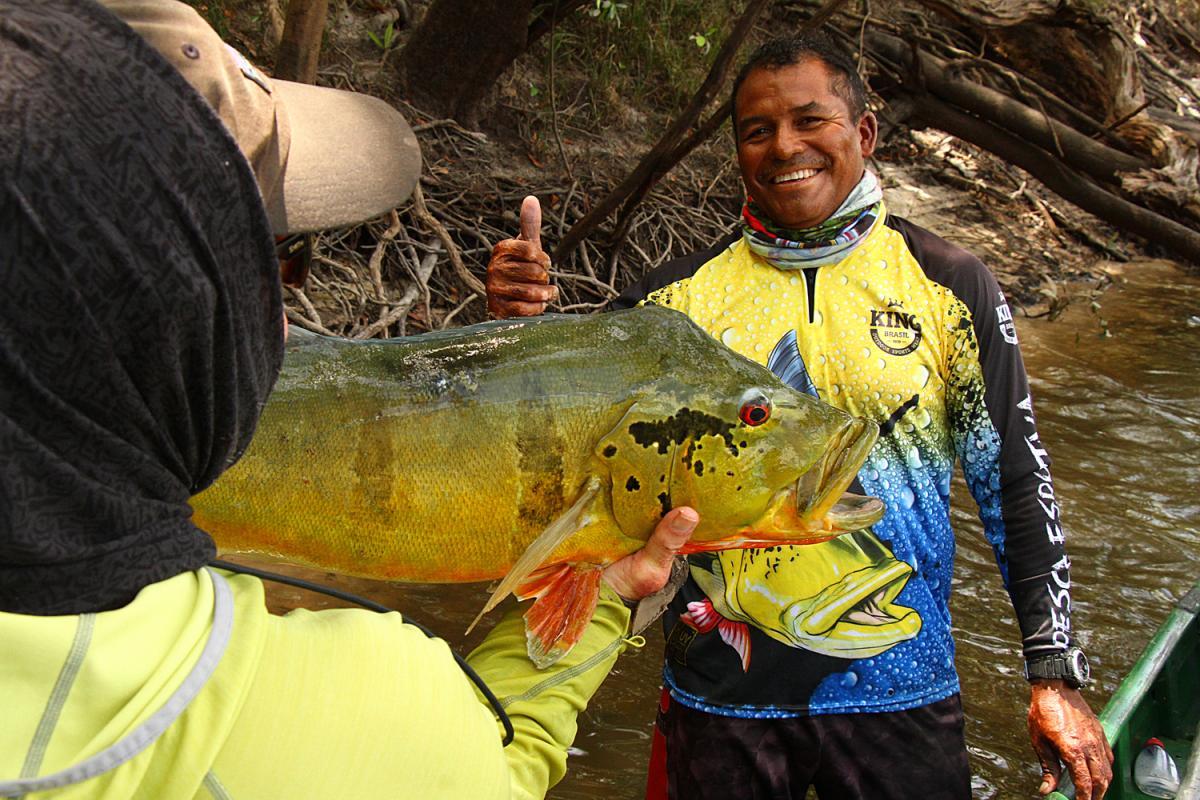 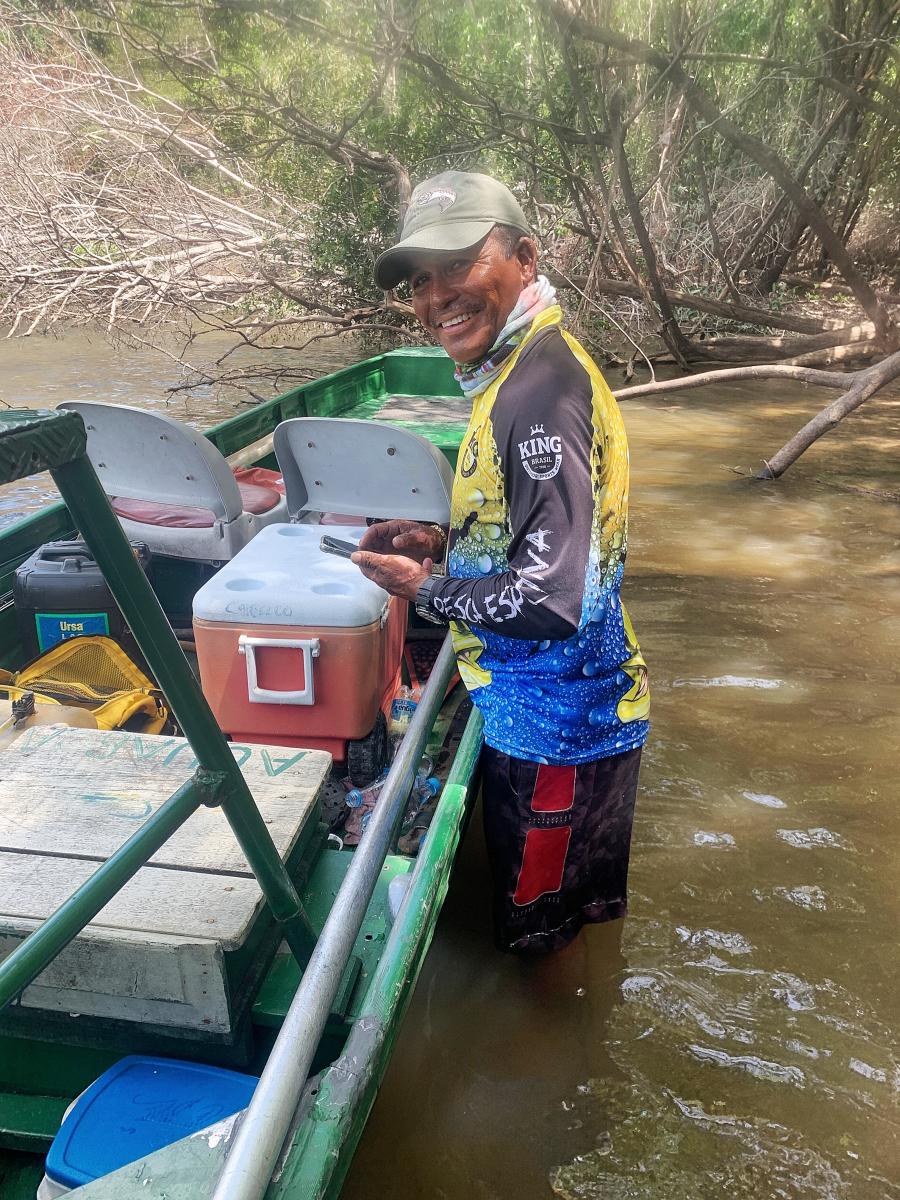 The guides will see these photos tonight.

As I came up for air, Joseph said " Your phone!"

"It's in a waterproof case." I sputtered (as if I had remebered this when I jumped in!).

Soon we landed the fish. It was 15lbs., not quite as big as Doug's, but I was thrilled that we got to see, let alone land, this fish. Joseph took photos and just stood by his boat smiling. He loved all of this and I'm sure the story was told at the guide quarters that evening. I think my willingness to get wet and show some cojones made up a bit for my weak showing this morning. At least I like to think so. Over the next few hours, Doug and I caught big peacock after big peacock until we were exhausted. It was the best day ever!

And thanks to Doug Jeffries for the photos of my epic fish!