After Bacaba had released his hand caught peacock from under the log (see that post here), Doug and I jumped in the skiff, cracked a beer and took a deep breath. Sadly, the trip was over. But it had been a great one and as Bacaba steered us home, we clinked cans and promised to return next year. We climbed back upriver, swerving around snags as Bacaba deciphered the channels always choosing the best to keep the prop spinning.

As we came around a big bend, we could see a boat off in the distance. As we approached and could make out those onboard, we could see Joseph, Mike Schwartz and his wife Kristie frantically waving at us. We pulled in.

"He just moved off. He was by that tree." Joseph exclaimed.

Doug and I searched frantically. I had been looking for a jaguar on the Agua Boa every year for thirteen years. Doug had seen one, but I had never seen one and as we searched in vain, it became increasingly clear I would most probably have to wait another year for a chance.

"We saw him for at least 5 minutes." Mike said, "He was lying down. We have great photos! He was huge!"

The excitement was palbable. I was both jealous and thrilled for them. To have an apex predator this close... a beast with the strongest bite of all the big cats, a creature twice as strong as an African lion and can take down and any creature that lives in the Amazon... to see a creature this beautiful, is truly an awesome moment... awesome! 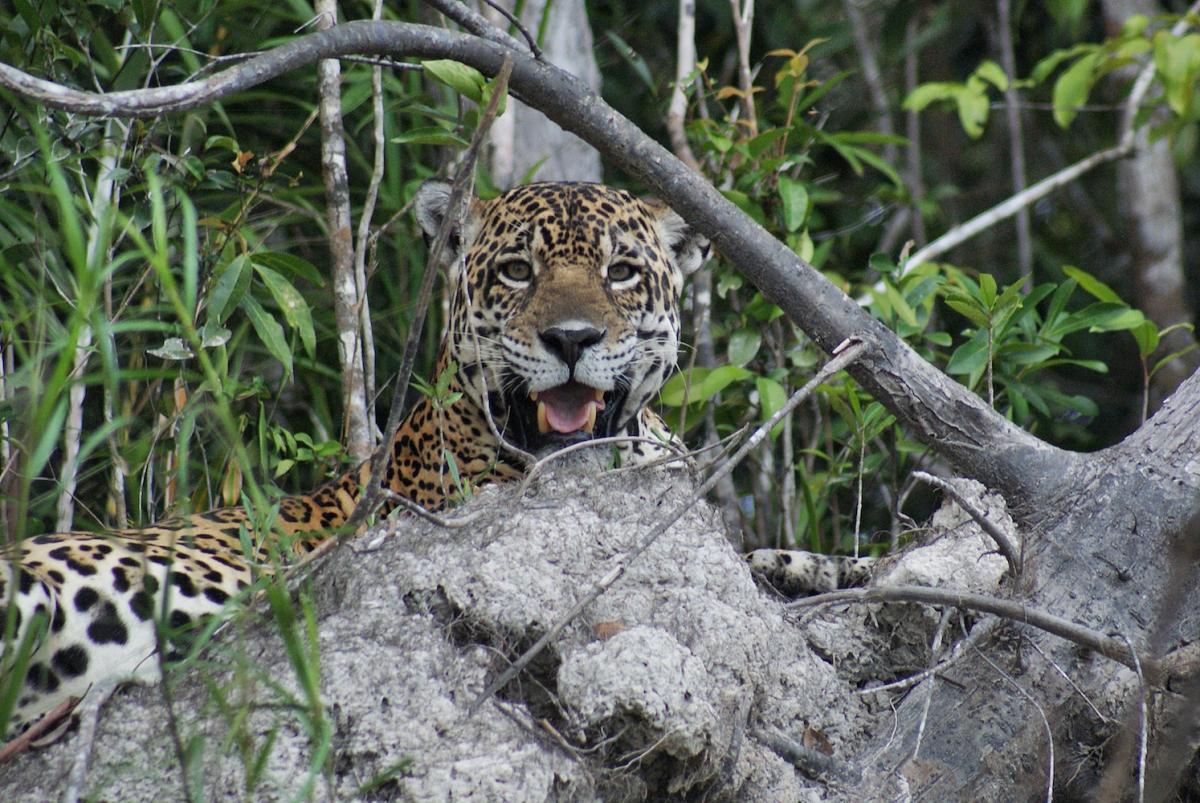 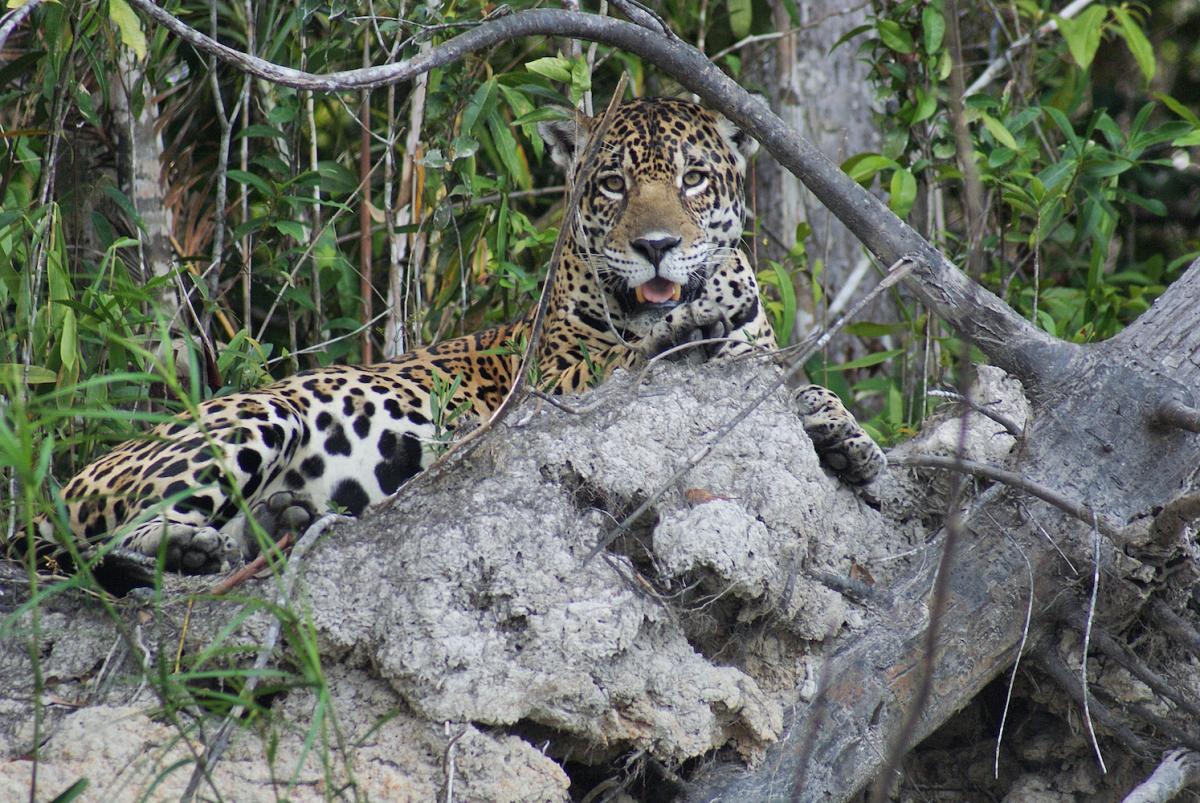 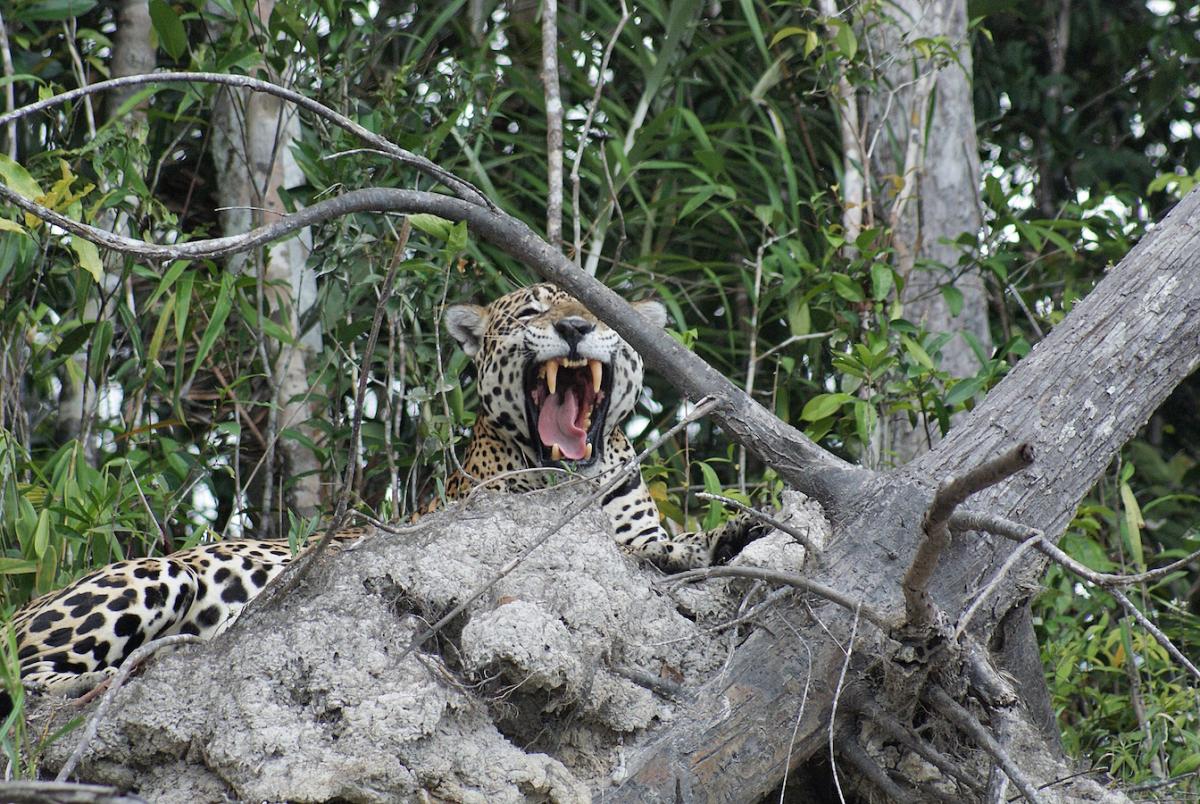 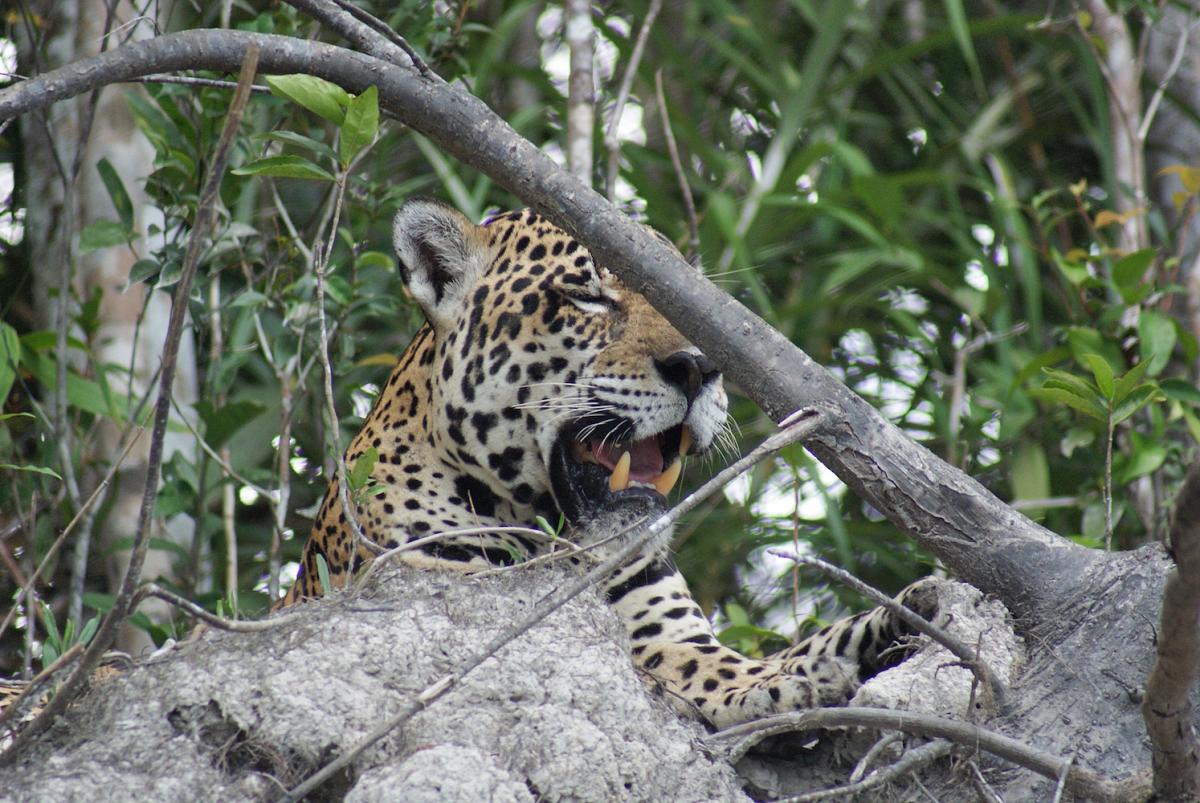 Soon it became apparent the cat was gone and it was time for us to leave too. Joseph pulled out as we did a few seconds later. We followed Mike and Kristie upriver. I could see them looking at their photos. I was very anxious to see these photos. At the dock I did. The big cat was right on the edge of the bank overhanging the river. I'm sure the cat could have leapt into their boat if he was so inclined. His yawning and panting made me think he never entertained such thoughts! 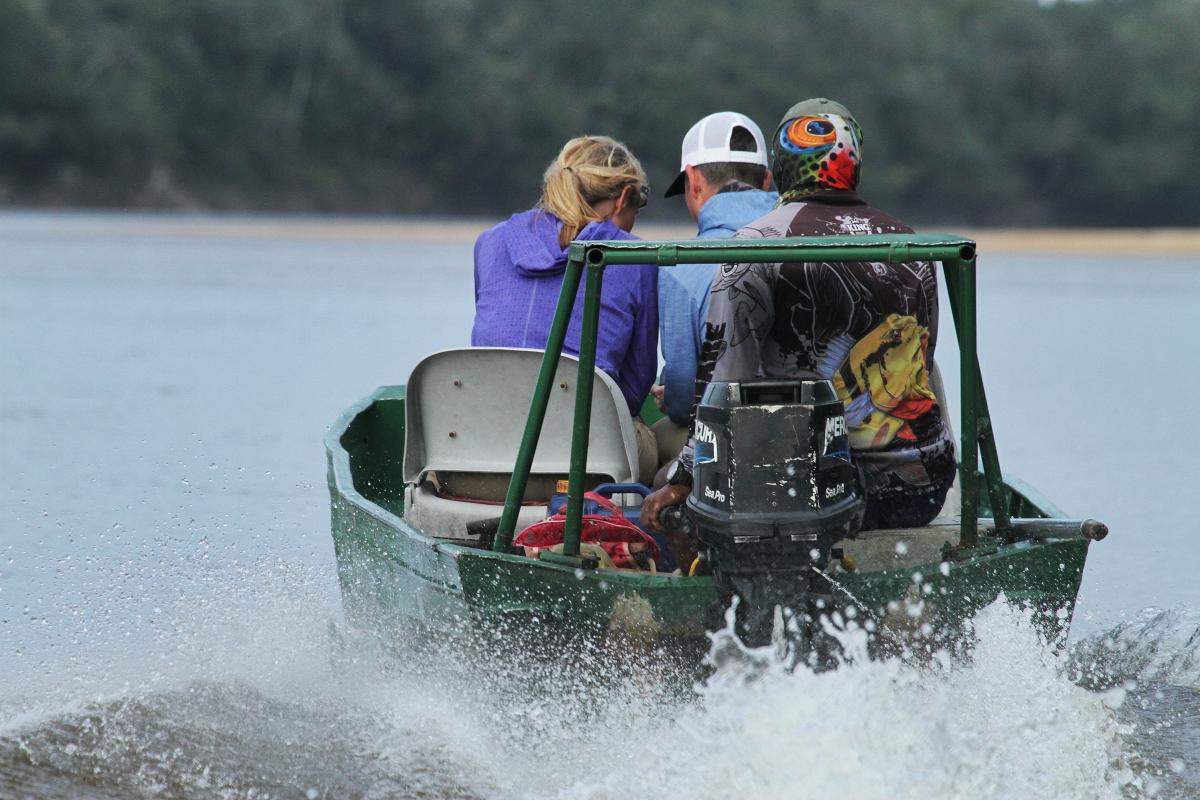 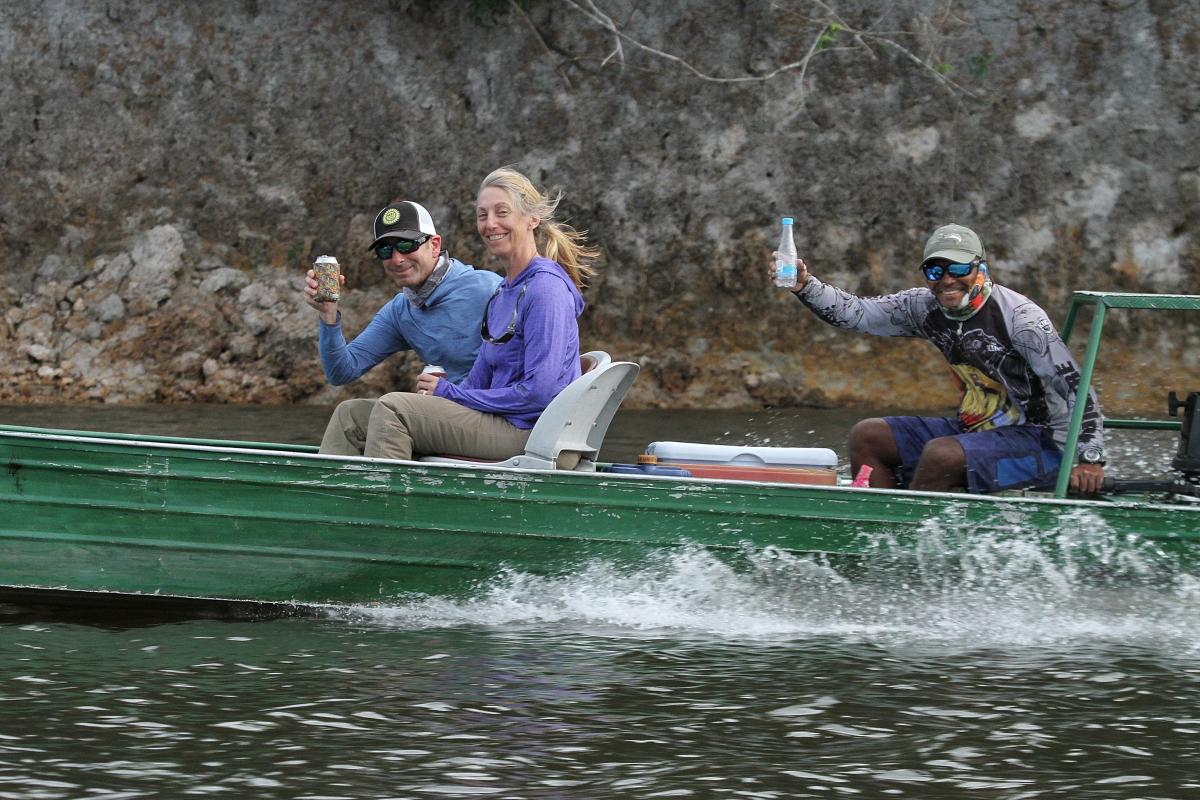 Joseph, Mike and Kristie return our toast to their amazing good fortune. What a way to end a trip! 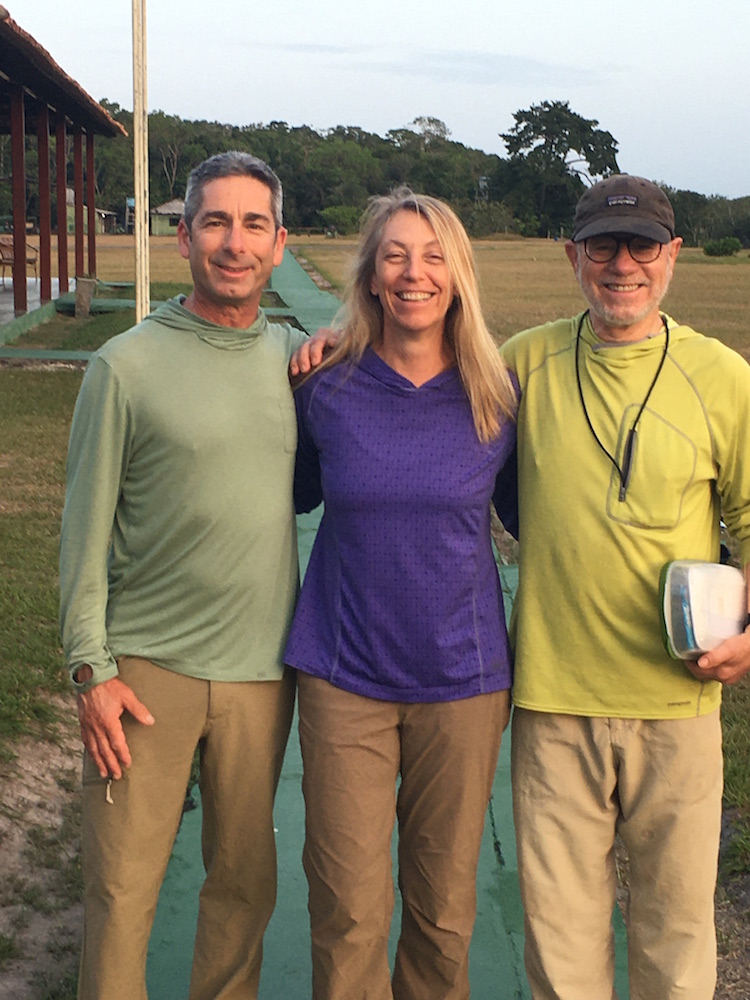 Mike and Kristie Schwartz and yes, I'm the one on the right that's green with envy!