Stalking Trout in the Shadows of the Bighorns

Hundreds of thousands of miniscule midges hovered tight to the water's surface. It looked like smoke... or the early morning fog one sees wafting off a stream after a cold night. An enterprising trout could have plowed through these delicate little creatures like a balleen whale through krill. A clever trout could be stuffed literally to the gills in mere seconds on this bounty of gnats... and then go back to whatever trout do in their leisure time. Strangely, not one trout seemed interested in this feast. I stood on the bank transfixed. Were they full? Was it too early in the season? Were the trout still holding in deeper water not aware of this buffet spread out before them in the bouncy, shallow water at the head of the run? 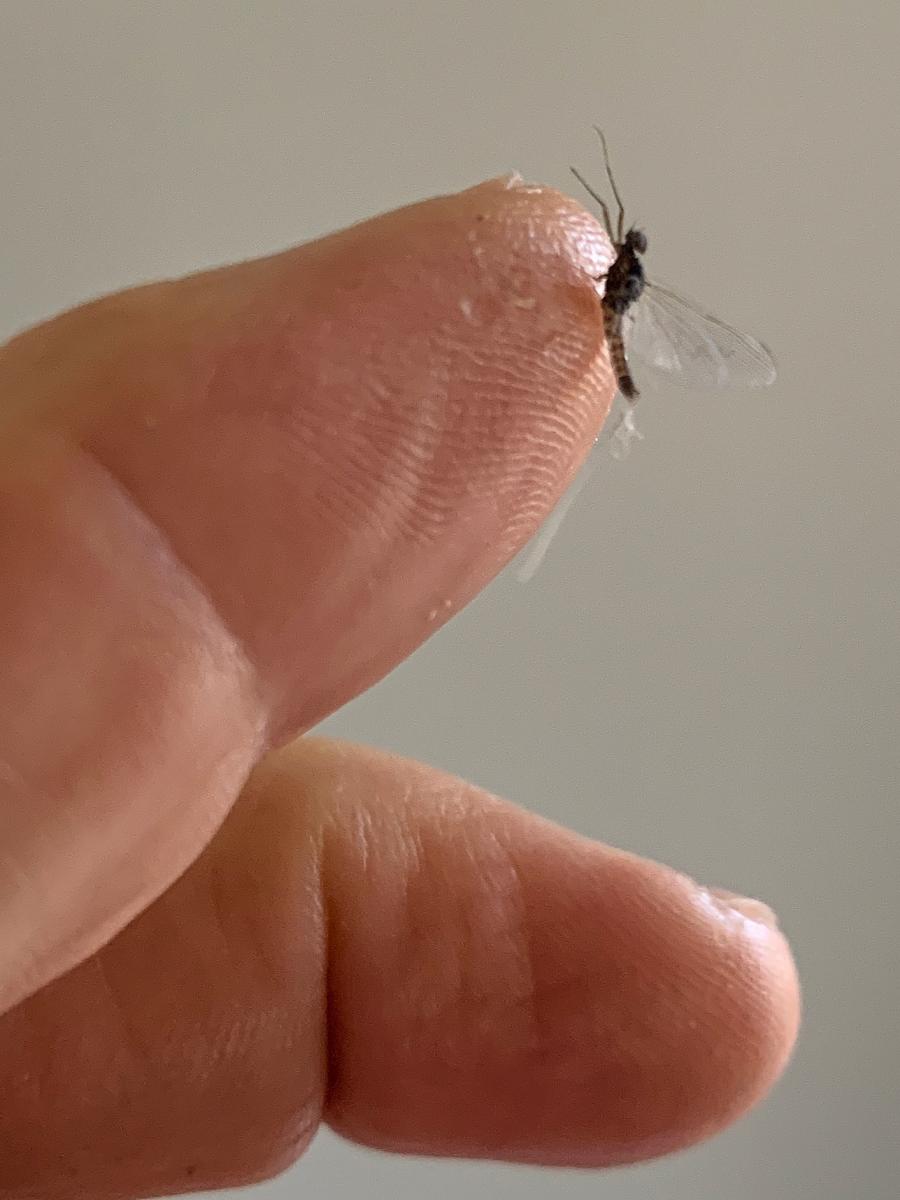 At my vehicle, I had tied on a big salmonfly dry and now, at the river, I was in the process of droppering a nymph when I saw it. "It" was, and I was almost sure, a rise in the dancing water at the head of a long run. Something had delicately, and almost imperceptively, plucked an unseen morsel off the water's surface. This was not the rise of a fish bulldozing its way through a few thousand midges. If I was right, this was a selective take possibly made by a large trout. I watched for the sequel. Soon I saw another rise in the same seam. It had to be the same fish! I watched intently and it wasn't long before I saw the fish slowly come up, eat and lazily drop back to the floor of the run. This was big fish. At least 18 or 19 inches, probably more. 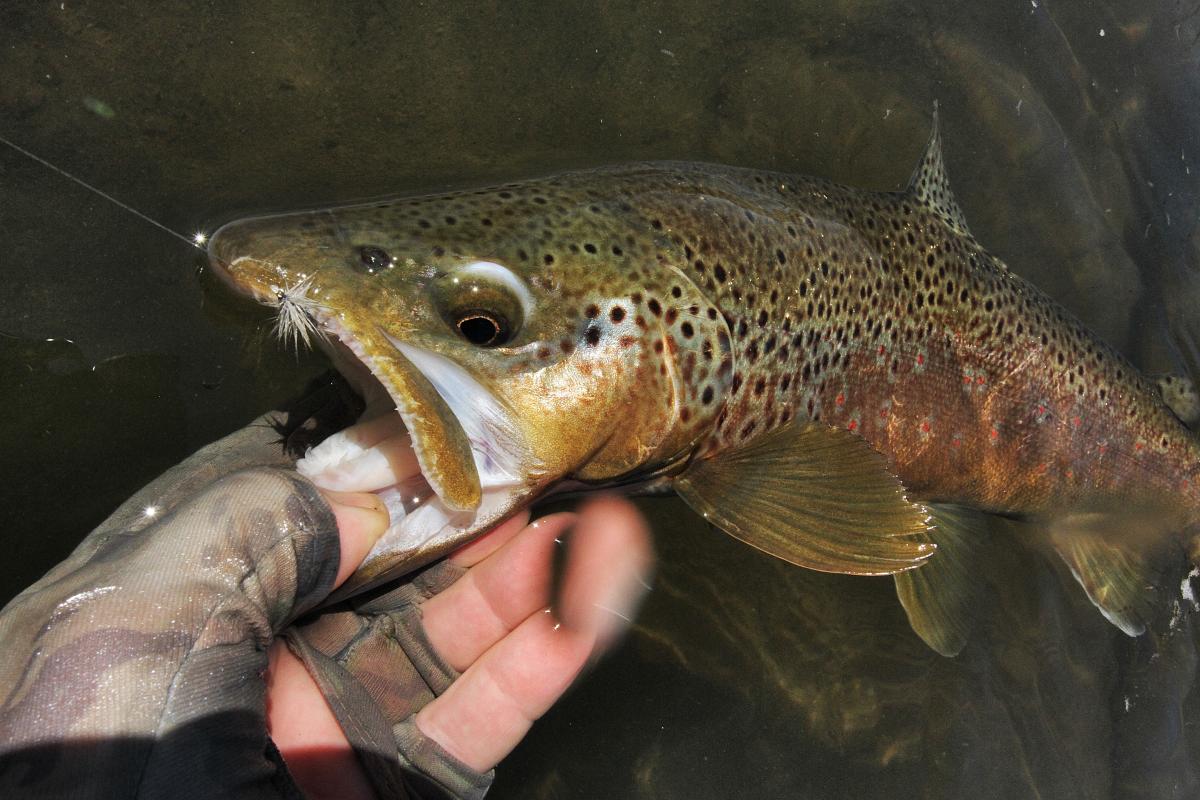 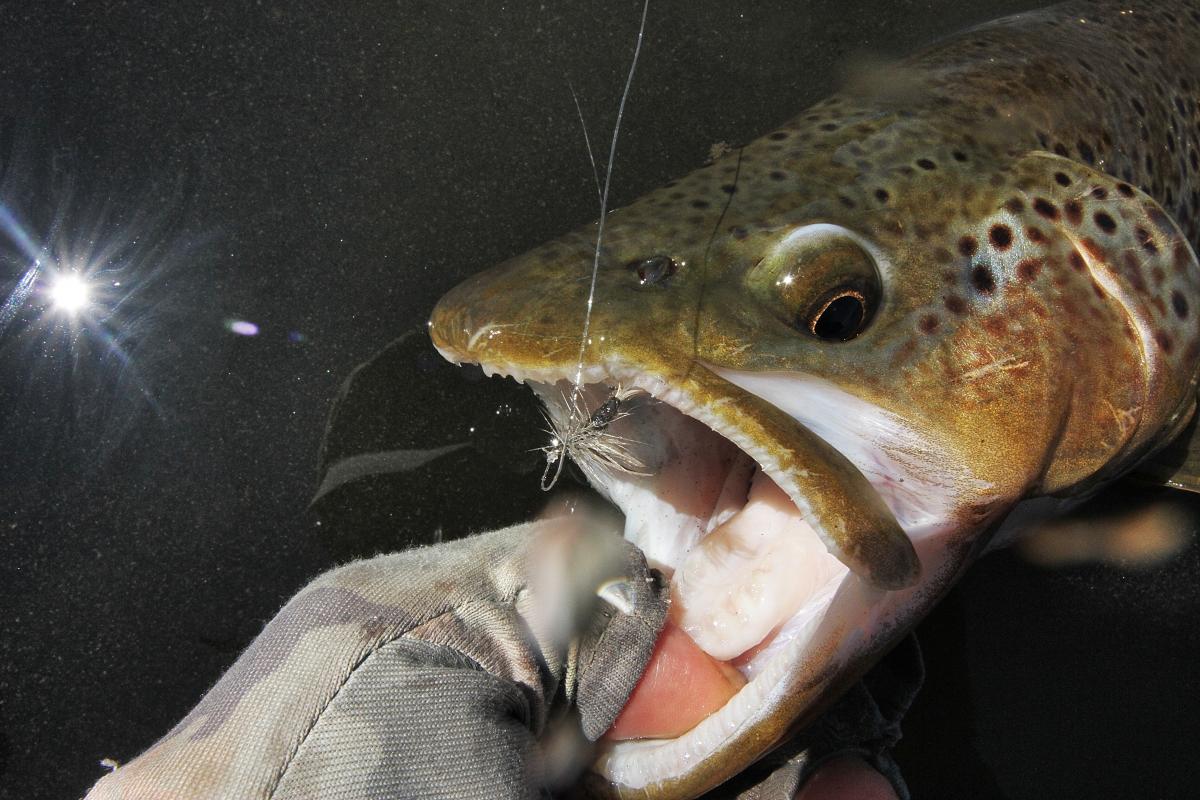 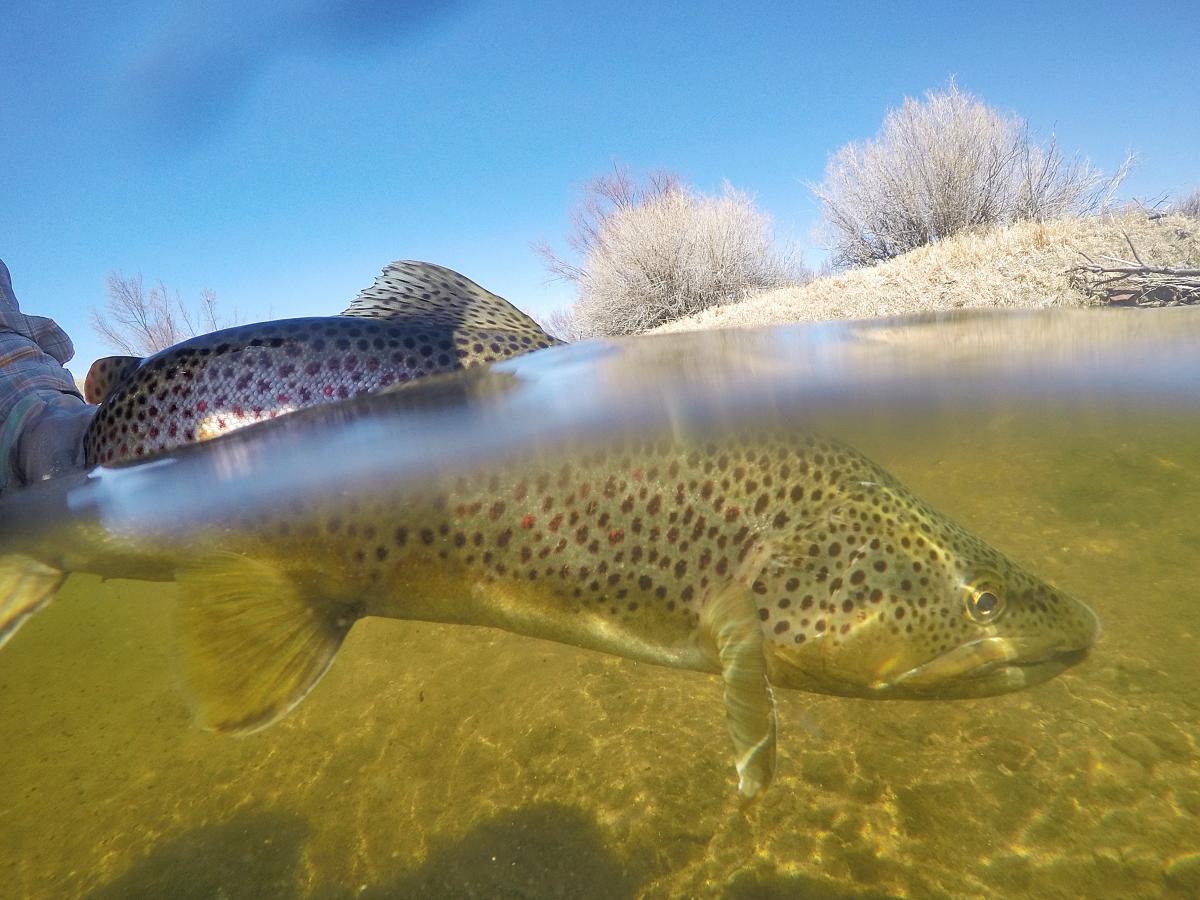 This fish had to have eaten a mayfly, but I saw none. Impatiently, I quickly snipped off my salmonfly and tied on a hank of 4X tippet followed by a size 16 blue dun. I slid down the bank hopeful I could enter the water quietly. I did a so-so job as I heard one rock crunch a bit as I stood up. I winced and waited... and waited. Had I spooked him?

Then the fish rose again. Yes, he was big. He was also a brown so I knew my margin of error was small. I feared he could easily be spooked. I needed to be careful. I stripped off enough string then cast directly upstream not wanting to line my fish. On my last false cast I pivoted 45 degrees and dropped my fly about 8 feet above the fish directly in his chow line. My fly drifted perfectly. There was no take. I tried again... nothing. I stopped and waited. I could now see a few little mayflies popping up sporadically. This must be what this trout was eating. I tried again. The trout rose to a natural right next to my dry. Again, I winced. I was no more than 20 feet away. With this front row seat, I cast again taking great pains not to line my fish.

Those few moments just as a dry fly reaches the lie of a big trout are both delicious and agonizing. Anticipation hangs in the air. It is impossible not to hold one's breath. 3-2-1.. and your fly is there. On this day, my trout stuck his nose up and around my bug. He inhaled my dry and sucked any remaining air out of my lungs. I struck and almost at the same time I came tight, the big brown made a vertical leap straight up into the clear air of this perfect Wyoming day. He fought tenaciously... almost indignantly. As I was fighting this fish, I saw anothe big fish rise downstream. After landing the fish and executing a quick photo and measurement, I released my fish and turned downstream. 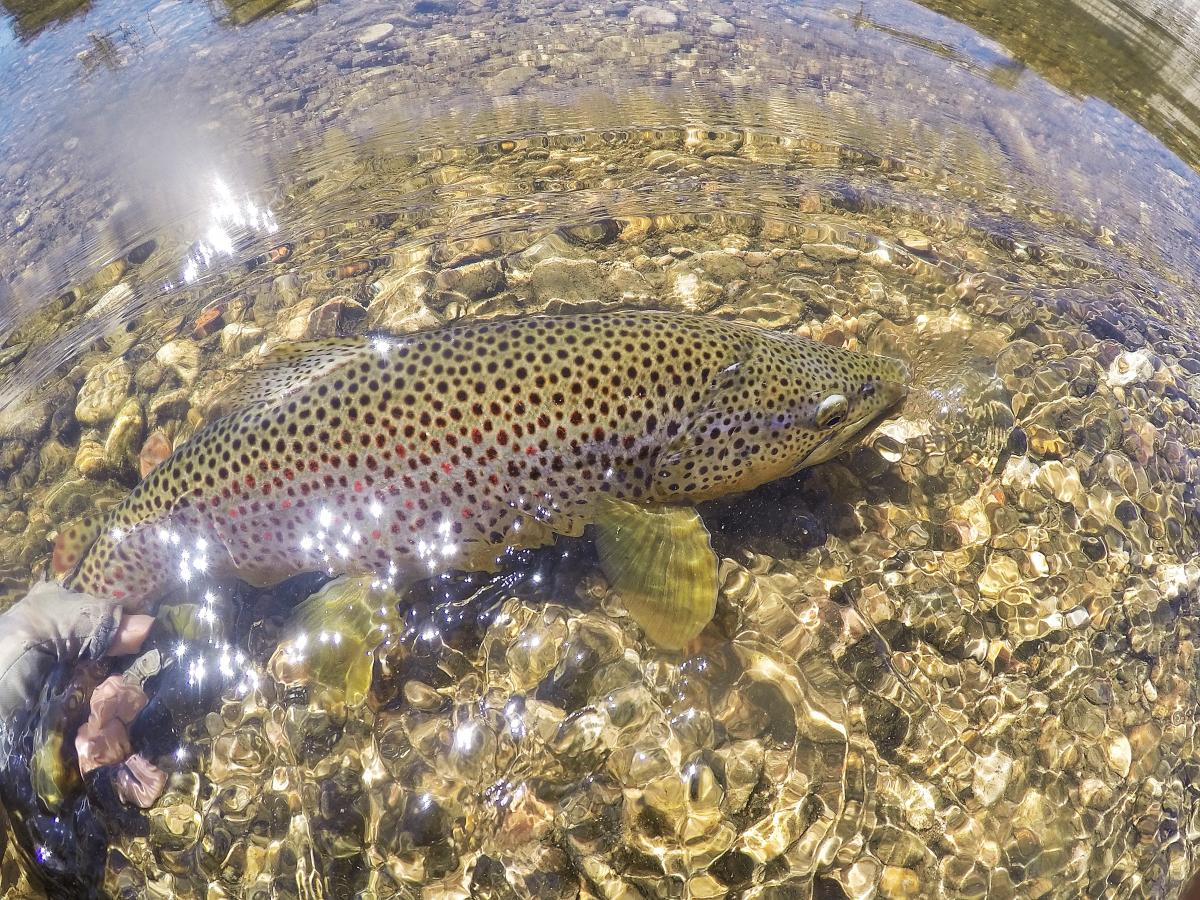 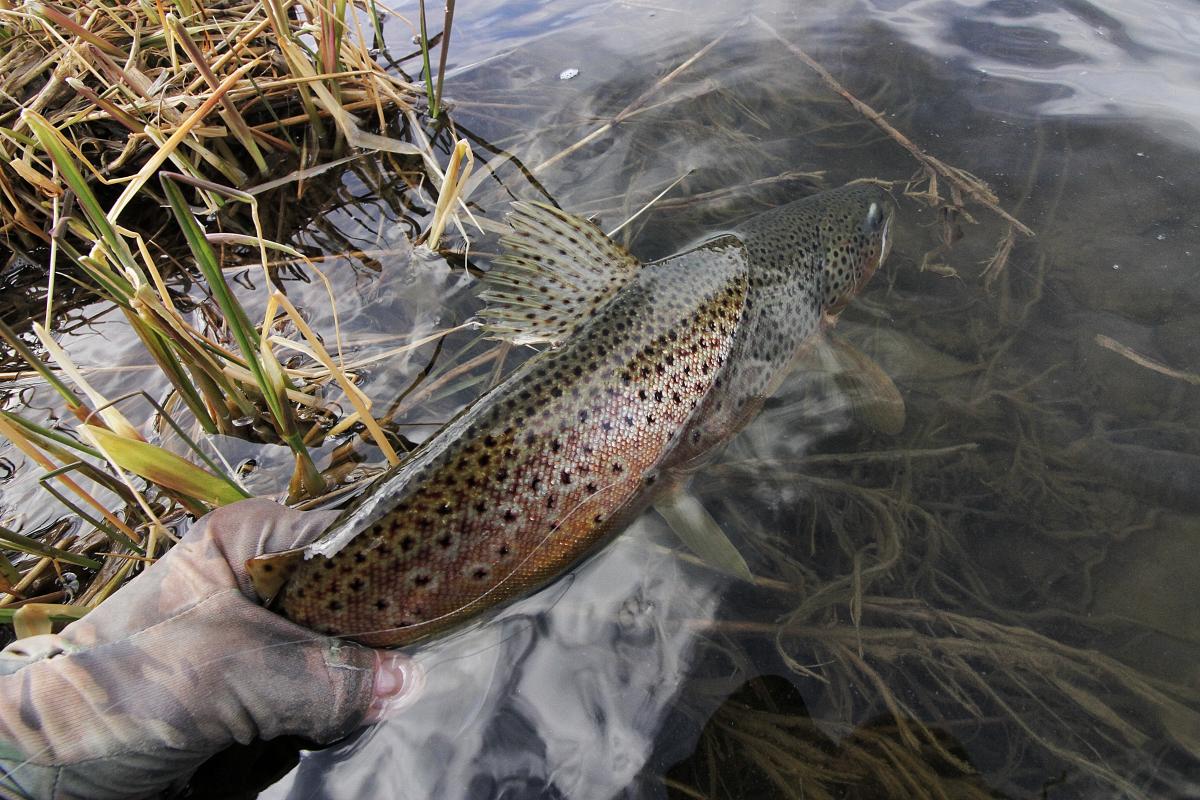 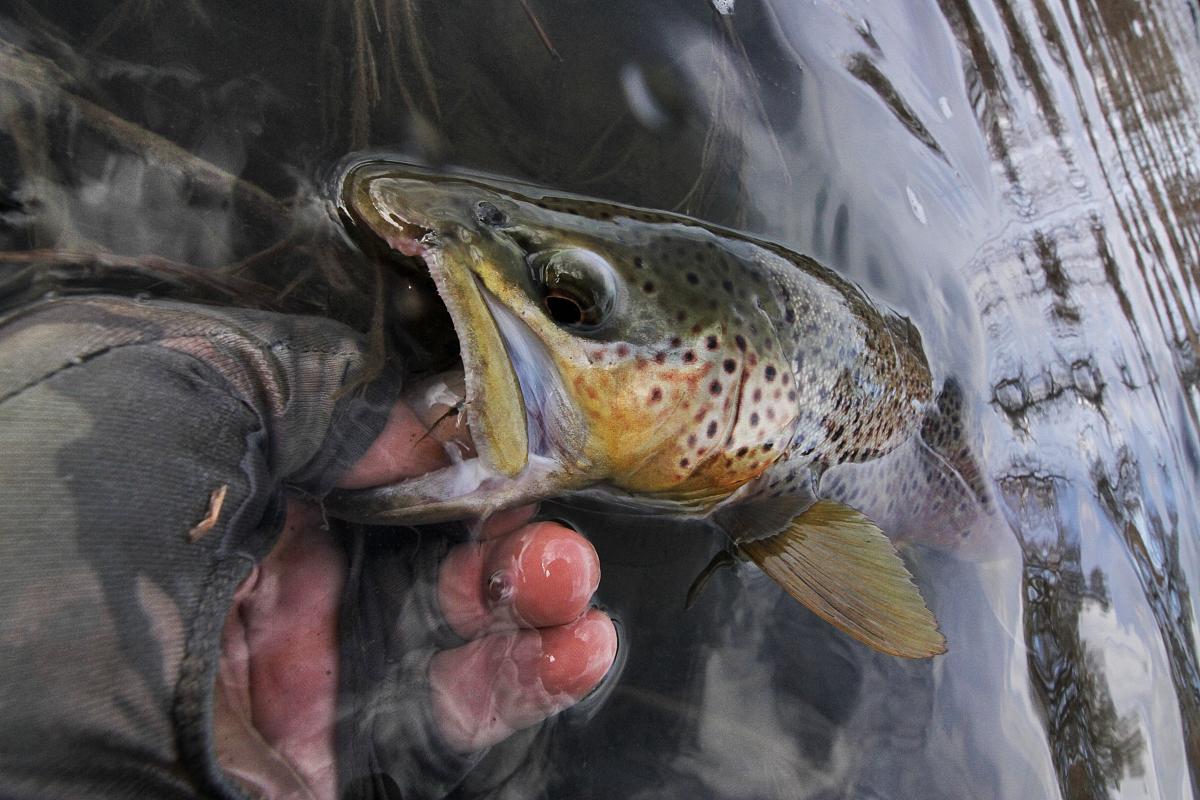 For the next few hours, the mayflies continued to pop up sparsely. If I could locate a rising fish, I was either able to hook the fish, or scare him off with a bad hookset, cast or drift. It was all just perfect. As the morning became afternoon, I went back to my salmonfly/dropper with equally good success, but it wasn't the same. There is just someting about that 3-2-1! 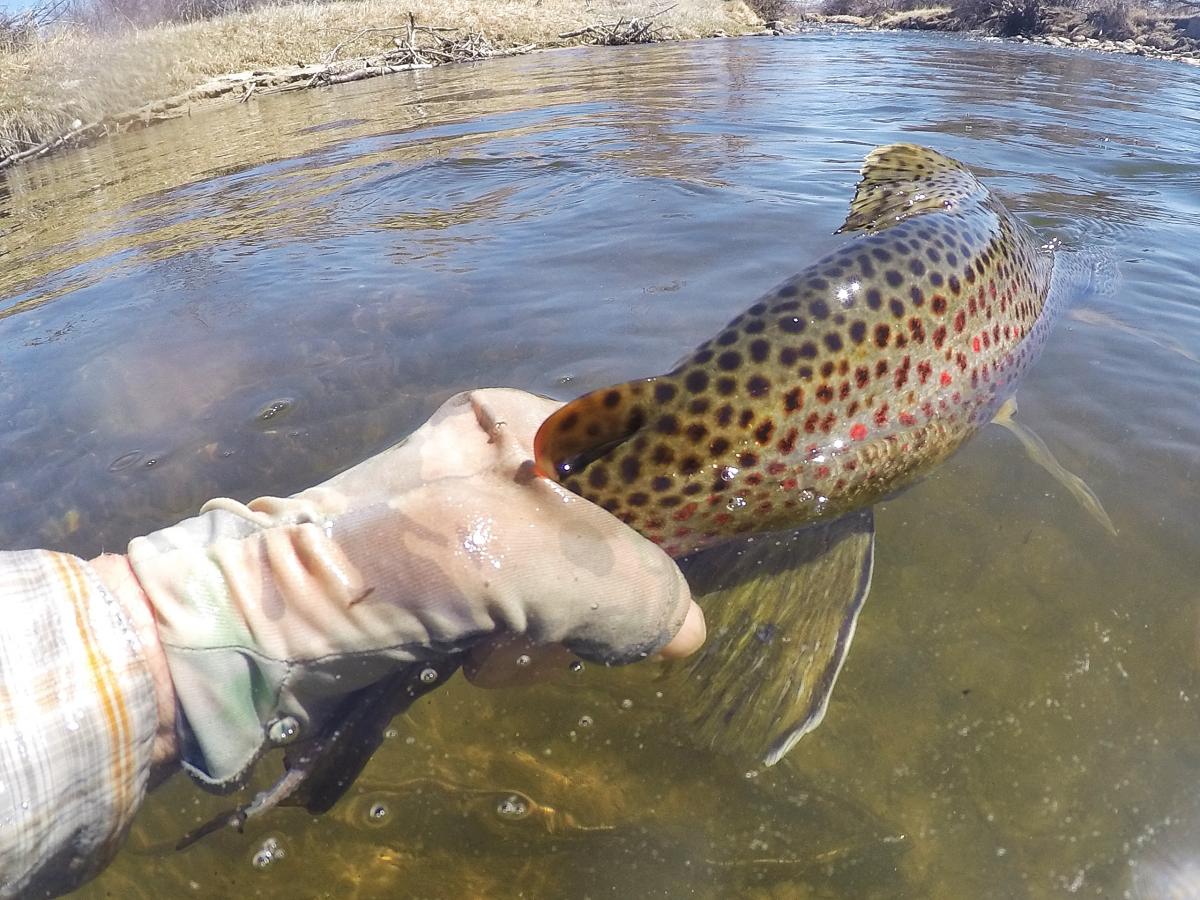 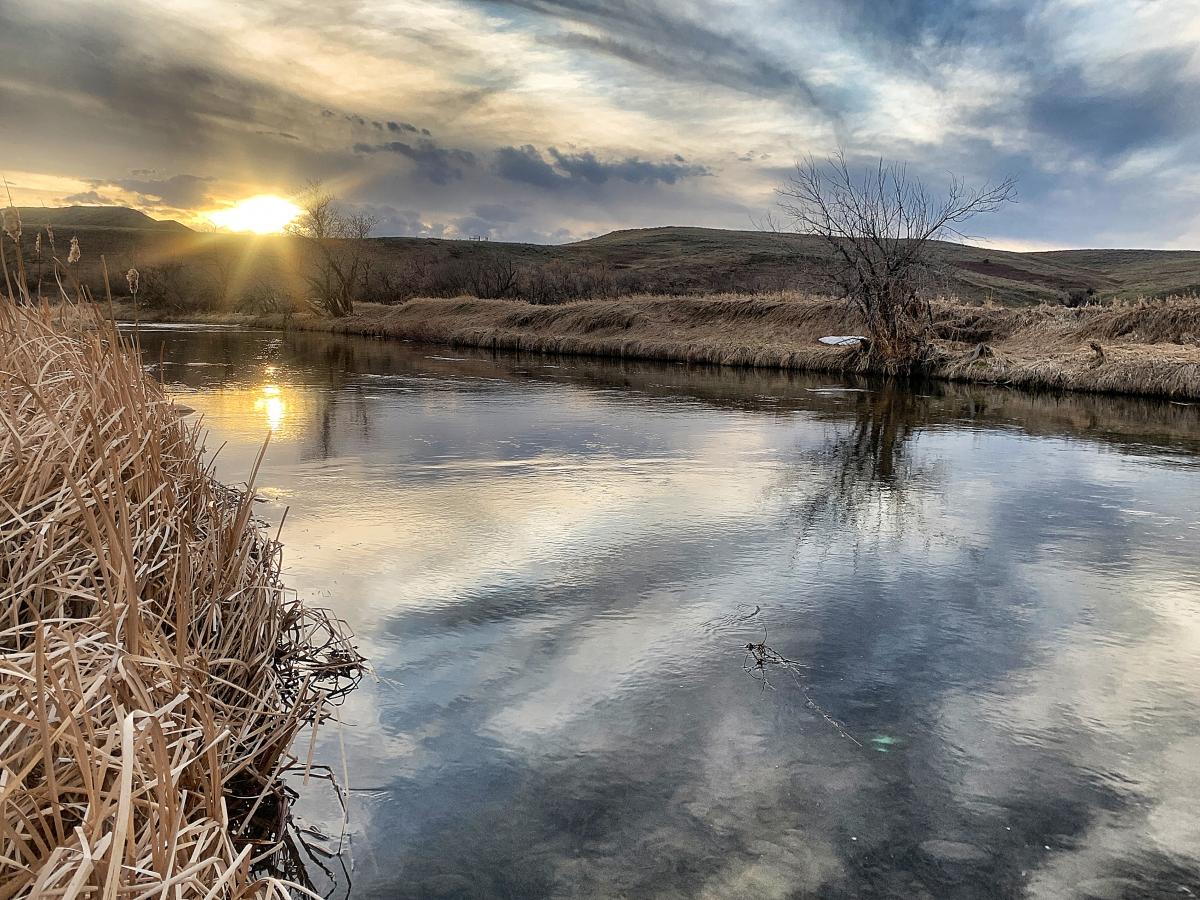 If you love dry fly fishing... if you love the 3-2-1 referred to above, and if you like being on secluded small streams far away from any other people, then our pre-runoff private water is for you! Give us a call today for more info on the private waters we fish.