An Unexpected Day on Paintrock Creek

When Peter asked me if I wanted to join him and drive over the mountain to fish Paintrock Creek, I immediately agreed, but my expectations were well in check. Now, don't get me wrong, Paintrock Creek is a spectacular fishery. It holds healthy populations of both rainbows and browns. These fish are generally in the upper teens and fat, feisty fighters. But on this day, the 8th of May last week, runoff had sputtered to a start and most streams were finally beginning to run a bit higher and off color. 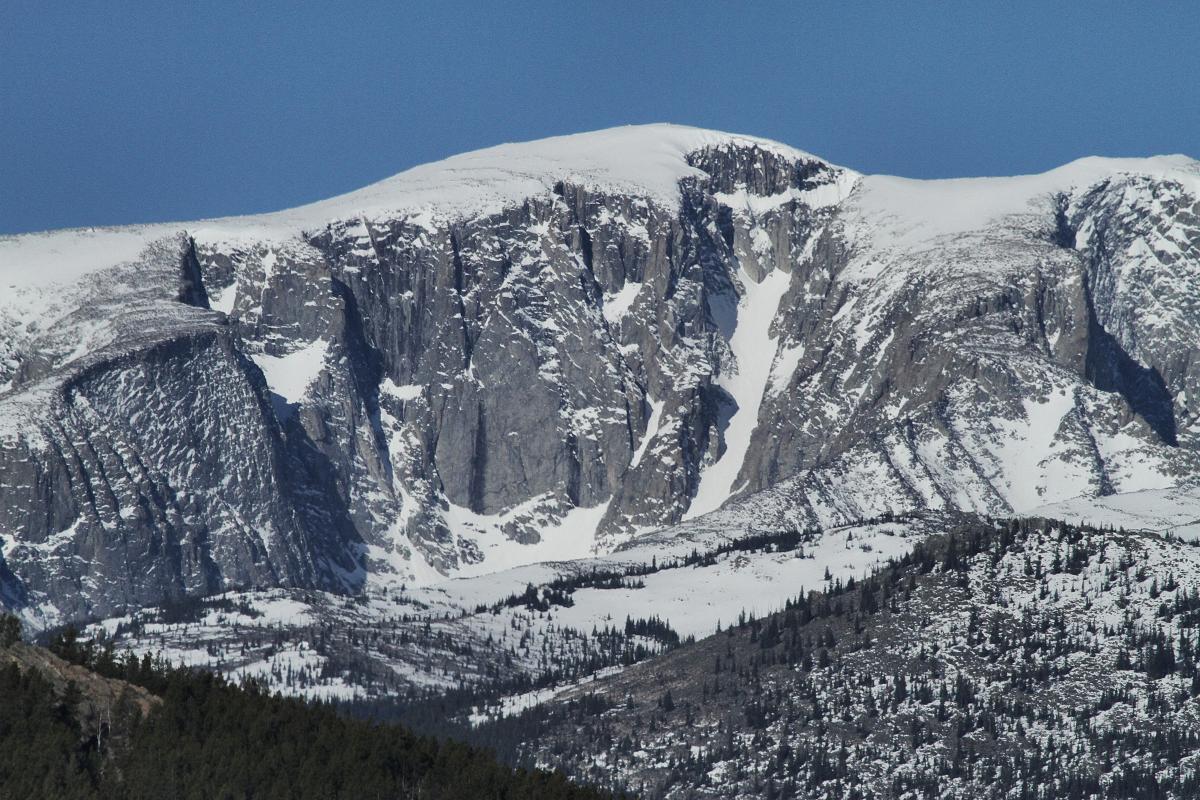 Peter and I thought we could possibly coax a fish or two up on streamers, but as I said, our expectations were in check. As we drove over the Bighorn Mountains from Sheridan to Tensleep, it was obvious last night had been a cold one. The considerable snowpack had a bright glaze indicating some thawing with significant sub-freeezing nightime temps. There was no runoff and as we reached the spectacular Tensleep Canyon for the steep ride off the mountain, we could see the creek was a bit off color, but not too much to fish. Our hopes rose, but we've been at this game long enough to know one creek can be in shape, while another creek only a drianage away can be blown out.

In Tensleep, we turned north and headed into the beautiful ranch lands of this part of Bighorn Basin. Deer and antelope dotted the landscape. Sandhill cranes flew overhead headed to the alfalfa fields. 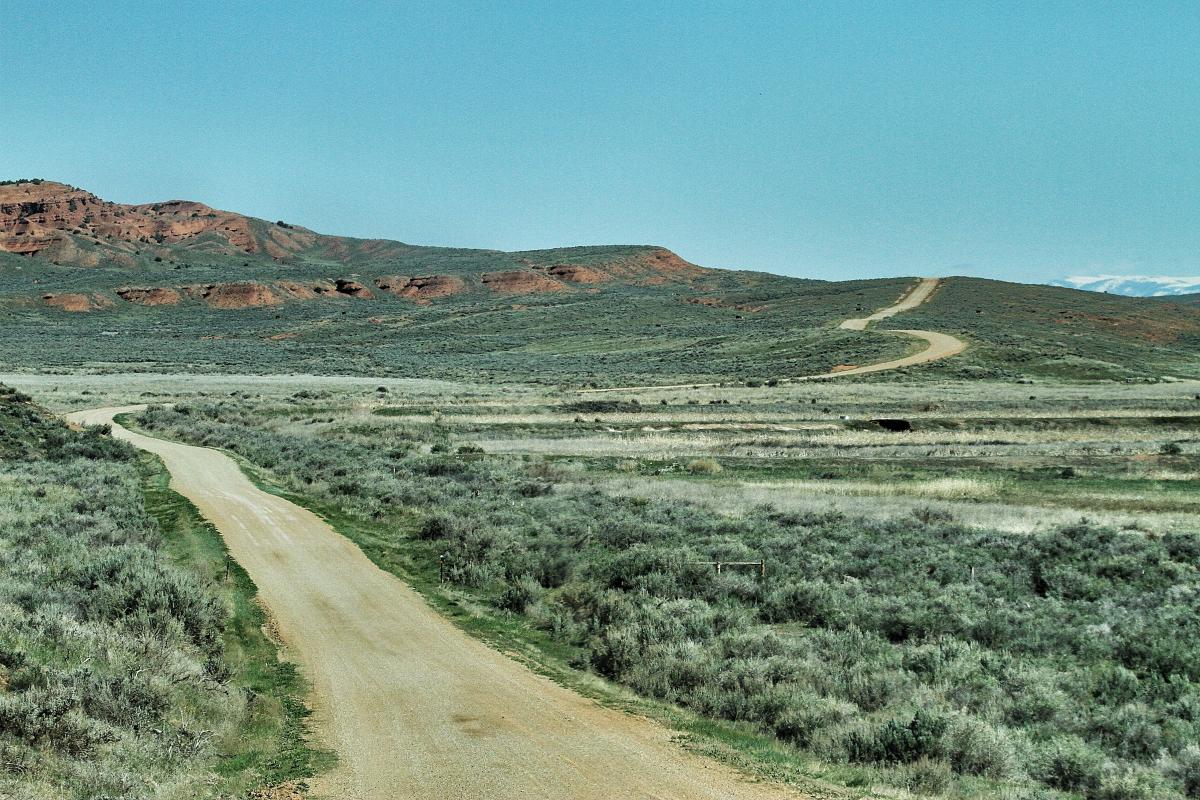 Soon we were headed into Hyattville. Now we would find out. We had two tests to pass. The first was the water clarity of Paintrock Creek that ran through Hyattville and secondly, Medicine Lodge Creek, a few hundred yards further would have to be fishable too... its silt load could make Paintrock unfishable downtream. Both creeks passed their exams; both creeks were clear enough. The energy level in Peter's big pickup rose significantly.

I'll back up a bit... we were headed to the Diamond S Ranch. Our sister company, Rock Creek Anglers, guides on Paintrock and I have fished this ranch many times in the past (see one of those days here). I've had spectacular hopper and hopper/dropper fishing for big browns on this ranch. Last year, at the end of runoff, I hooked an amazing brown that could have been 28-30 inches long but I never got the fish to hand due to the heavy runoff water, but I had the fish on for a while. I got a very good look at him as I had him in the shallows many times before he eventually released himself and floated off shimmering in the sun... much to my chagrin. So here we were back again.

The owners of the Diamond S, after 20 years of operation, have recently put the ranch on the market. The owners have always been very gracious to me. In addition to the marvelous fishing, the ranch sells some of the best organic yogurt and cheese you've ever tasted... and their beef is simply spectacular.

The ranch is listed with Peter R. Widener, he is one of my partners in Angling Destinations. Peter runs our property interests and wanted to get some current marketing data, but I like to think he needed an expert model for the brochure. Peter works with Angling Destinations by hosting trips and helping with bookings based on his extensive angling experience and knowledge. Peter's full-time focus are his real estate clients both buyers and sellers.  Peter acts as an agent for ranch properties with an emphasis on fishing and as such, has asked me to assess some of these ranches. I have, of course, agreed. Nothing like getting the chance to fish some of the best fishing properties in Wyoming and Montana.  I look forward to writing about some of these unique rivers and most importantly, getting to fish them. If interested, have a look at Peter's website at www.pfisterlandco.com This summer, I'll be visiting some of these amazing ranches and reporting on them to my readers. In return, all Peter has asked is I describe these properties accurately and factually. That seems pretty fair to me! 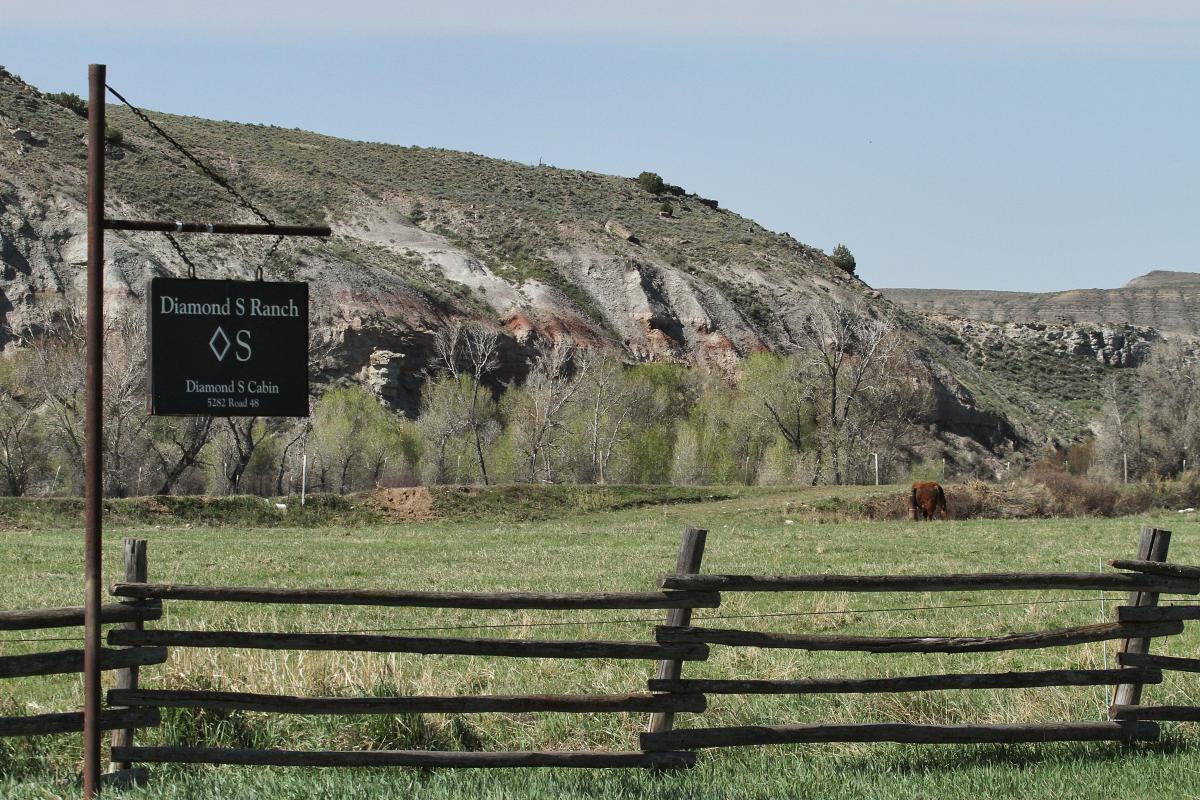 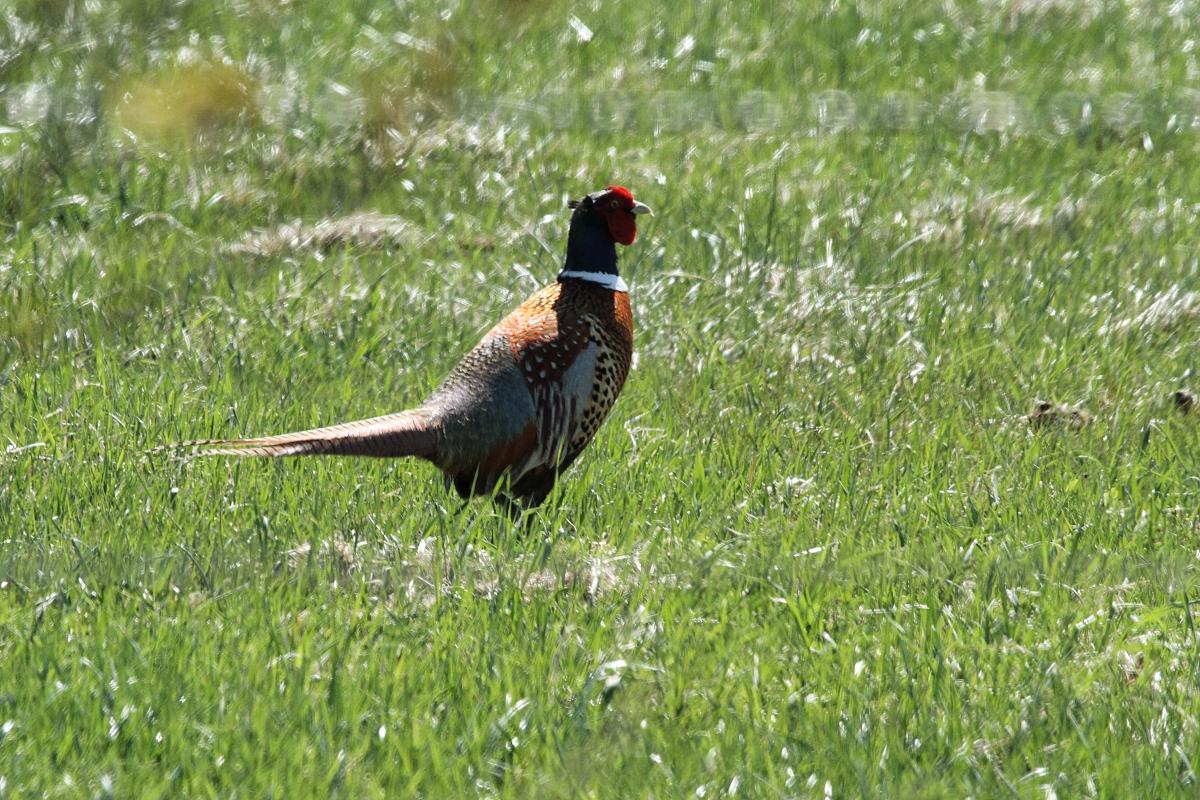 As we pulled into the ranch, pheasants scuttled across the road and deer hid in the shade. There was not a cloud in the sky. As we reached the river and crossed the wooden bridge, we got a good read on the actual conditions. The river was a bit high but VERY fishable. We immediately parked under a big cottonwood and wadered up. We decided Peter would fish a beetle/dropper, I would fish a streamer. One fish would be a successful day. We walked the 50 feet from our pickup to the first riffle below which a beautiful, soft water eddy created some fishy looking water. 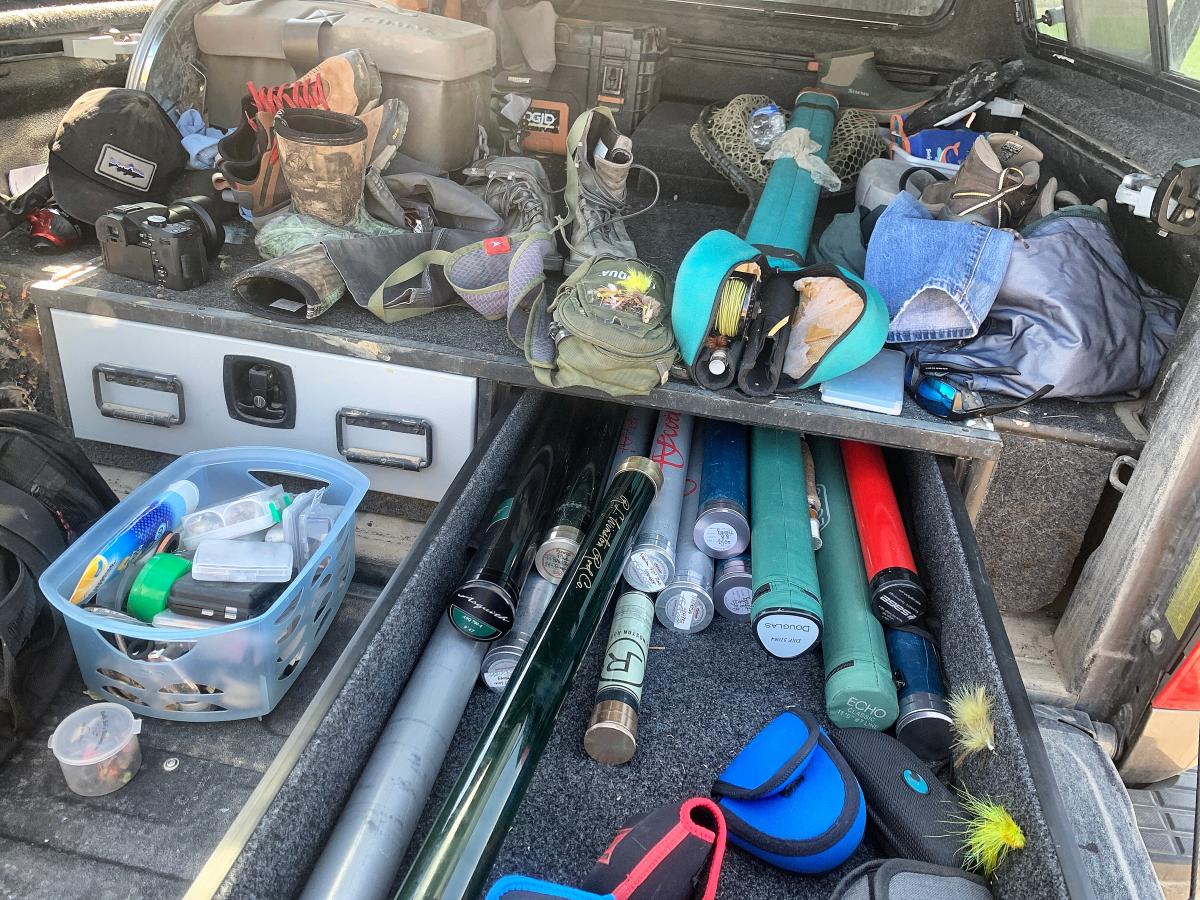 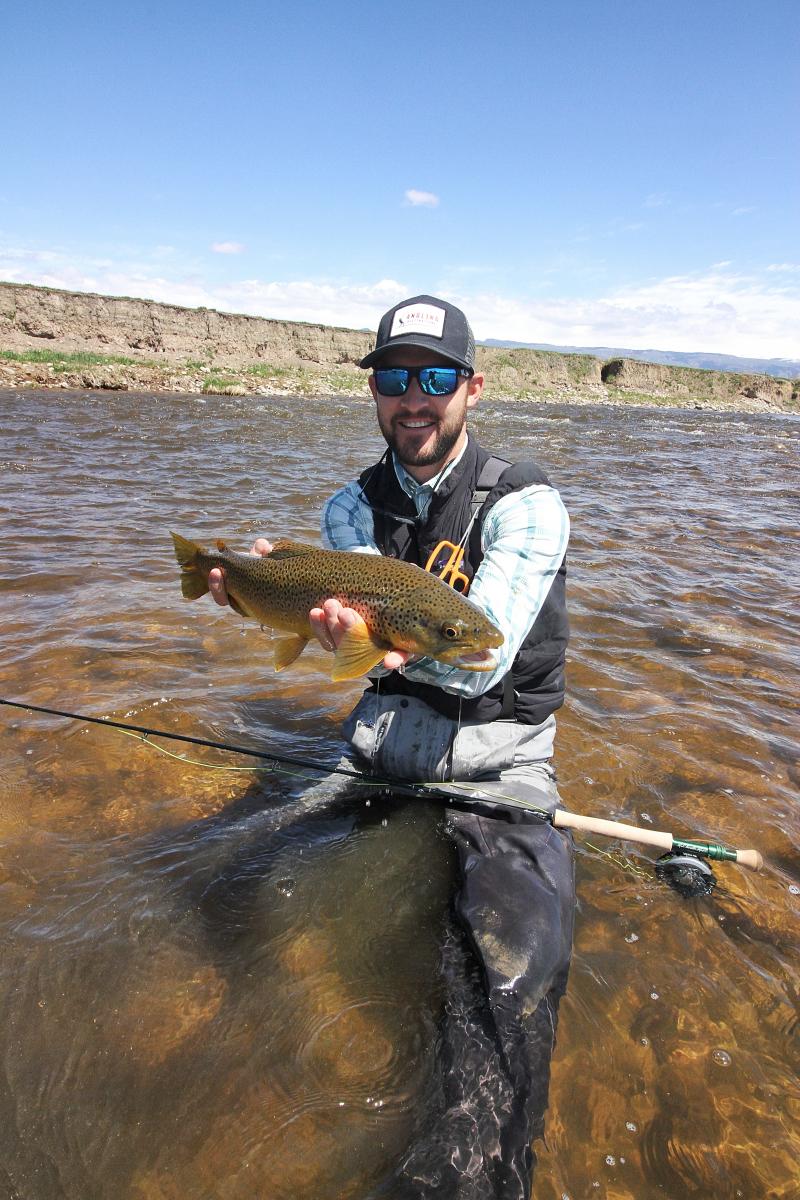 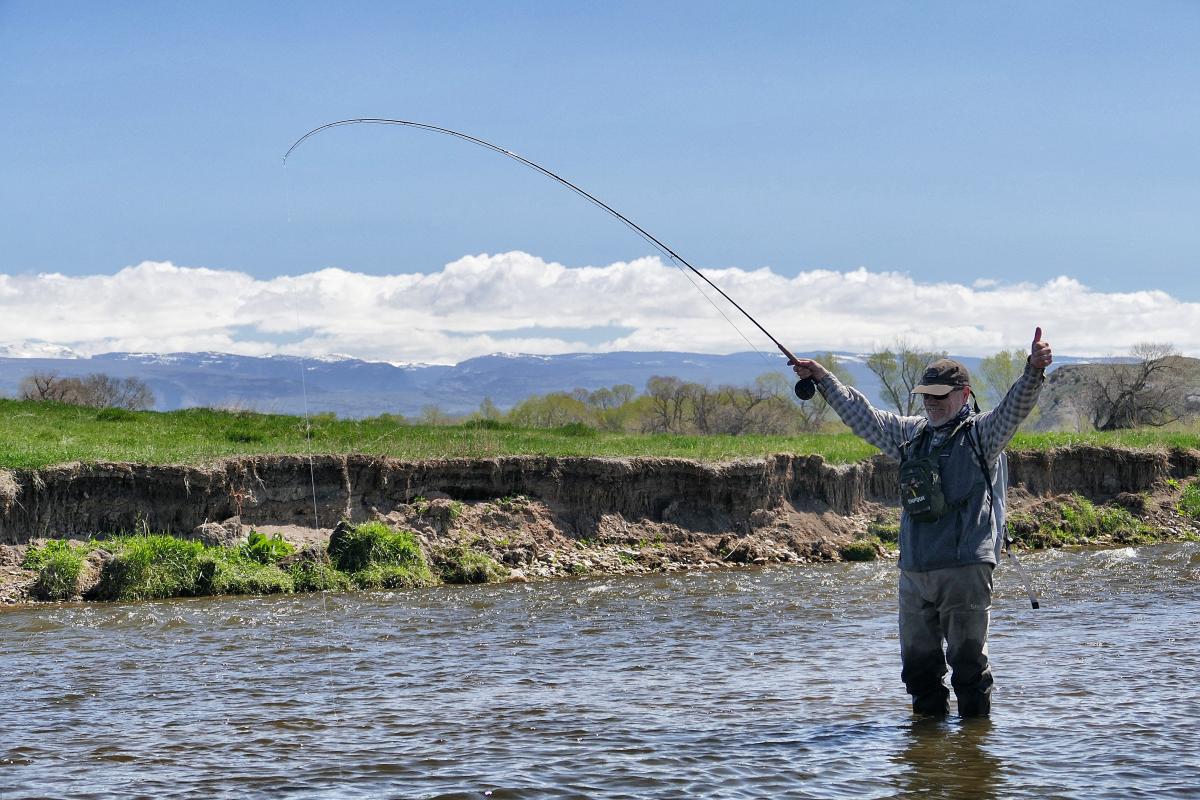 Peter had a hit on the beetle on his first cast. I had a hit on the streamer on my first cast. OK, now it was game on. While both strlkes were somewhat halfhearted, we knew that persistence would pay off. And it didn't take long. Peter landed a 19" fatty, I soon followed suit with an 18" wannabe. We probably had ten hits in that first run and landed four fish. Not a bad start at all! 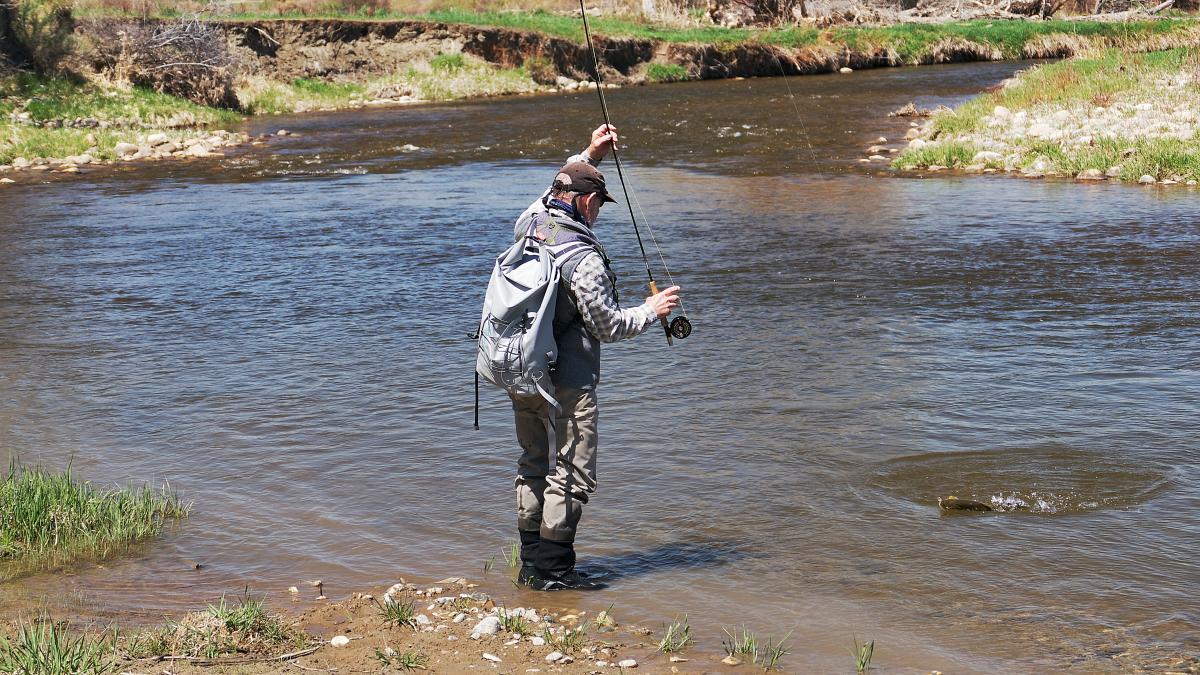 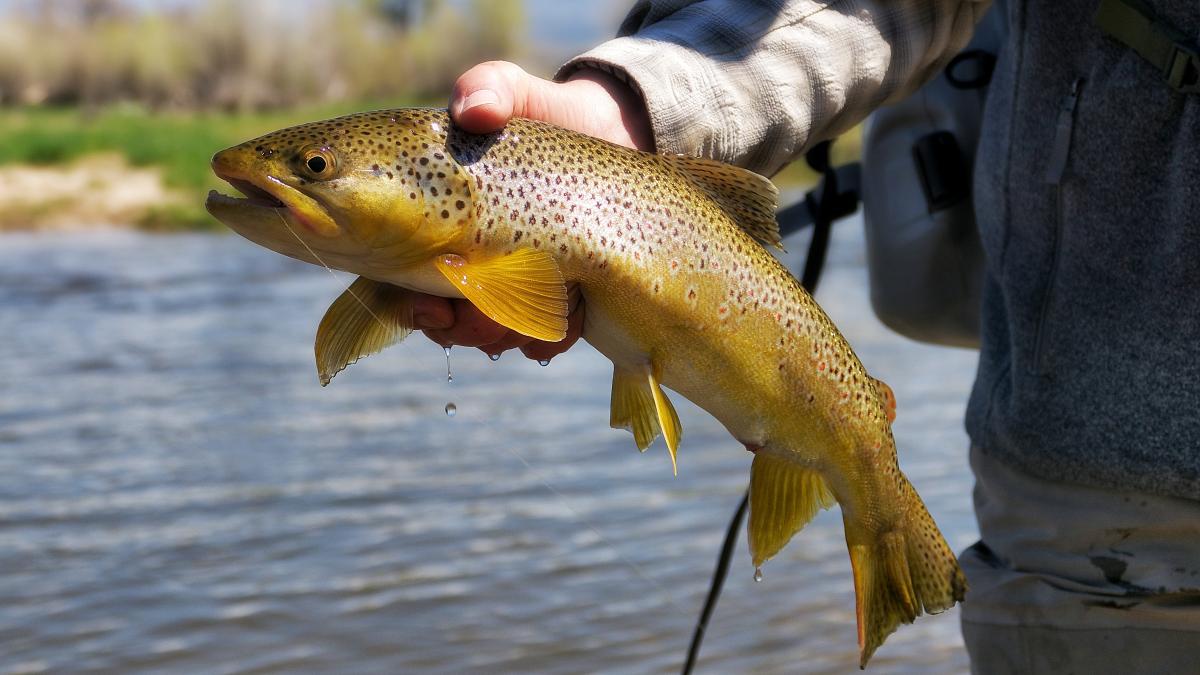 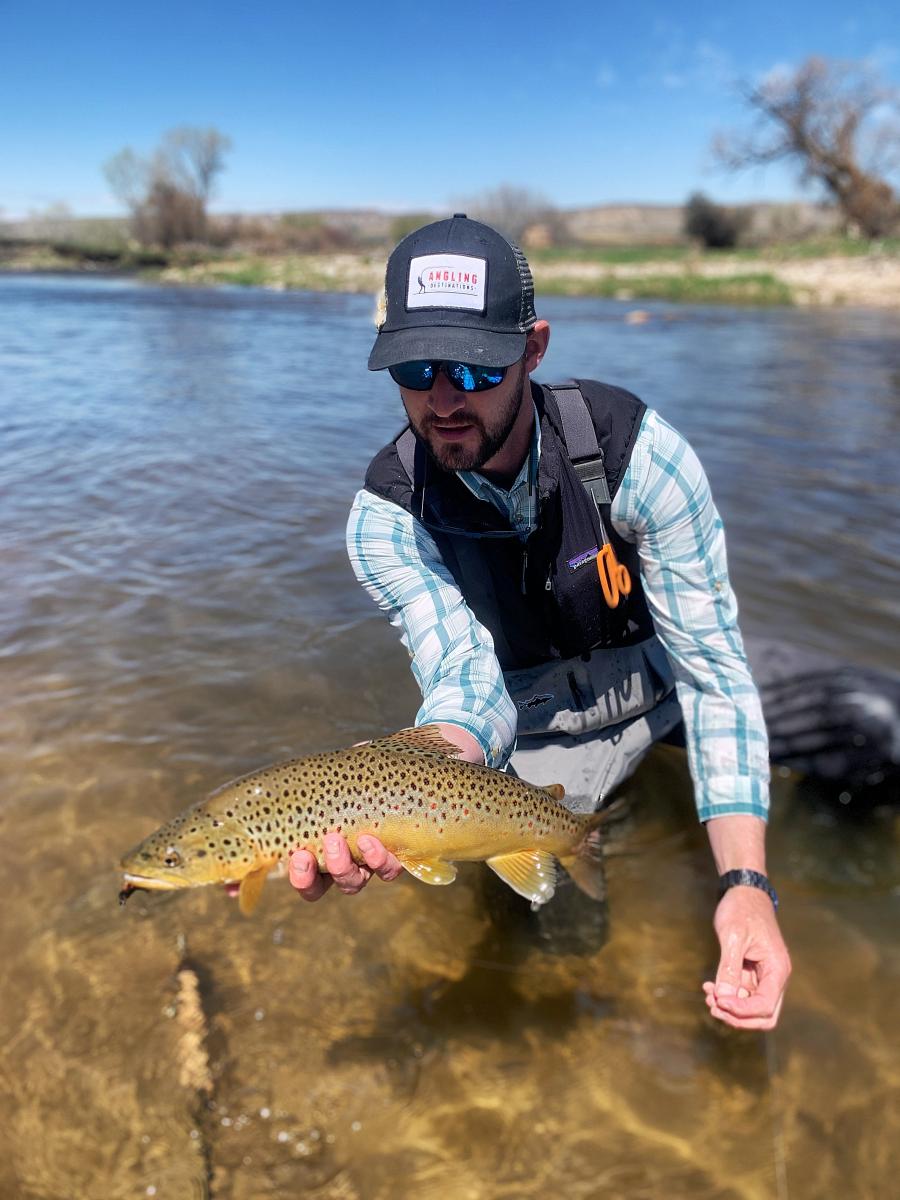 Over the next few hours, we worked our way upstream. Peter used his dropper rig, I fished a streamer. Paintrock Creek offers one beautiful section after another. Riffles give way to slicks, which end in classic tailouts. The next section might be a gravel bar that dumps into a curved river-rock shelf or a braided channel that comes together in a swirl of enticing holding water. Every section on this river looks good; every new bend makes an angler's heart beat just a bit quicker. There is no doubt this excitement is enhanced by the beauty of the ranchlands that surround it. Rugged bluffs are set back from the river on one side, while on the other side of the river, lush alfalfa fields are just beginning to sprout their green bounty. Pheasants cackle, sandhill cranes announce mating intentions and ducks scatter in front of us. If where you fish is as important as the quality of the fishing, the Diamond S has certainly checked both boxes.

Peter tells me he wants to get back to the Diamond S in June after the runoff tapers off. He hopes to get some drone footage. I'm totally onboard for that! 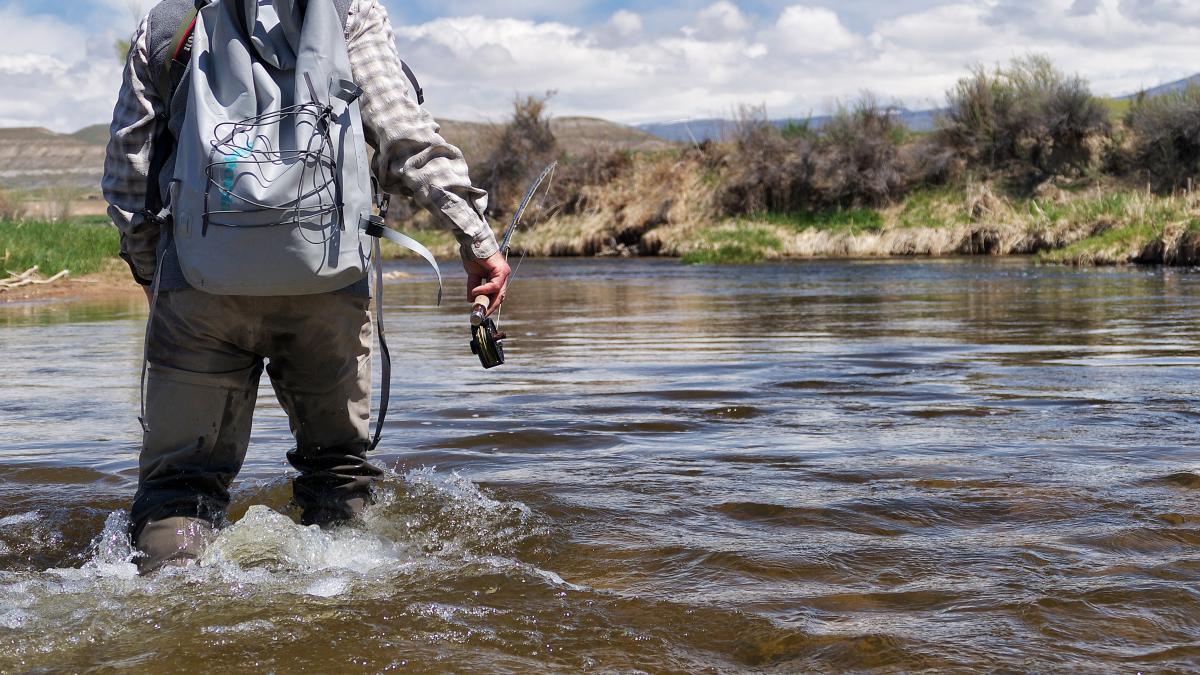 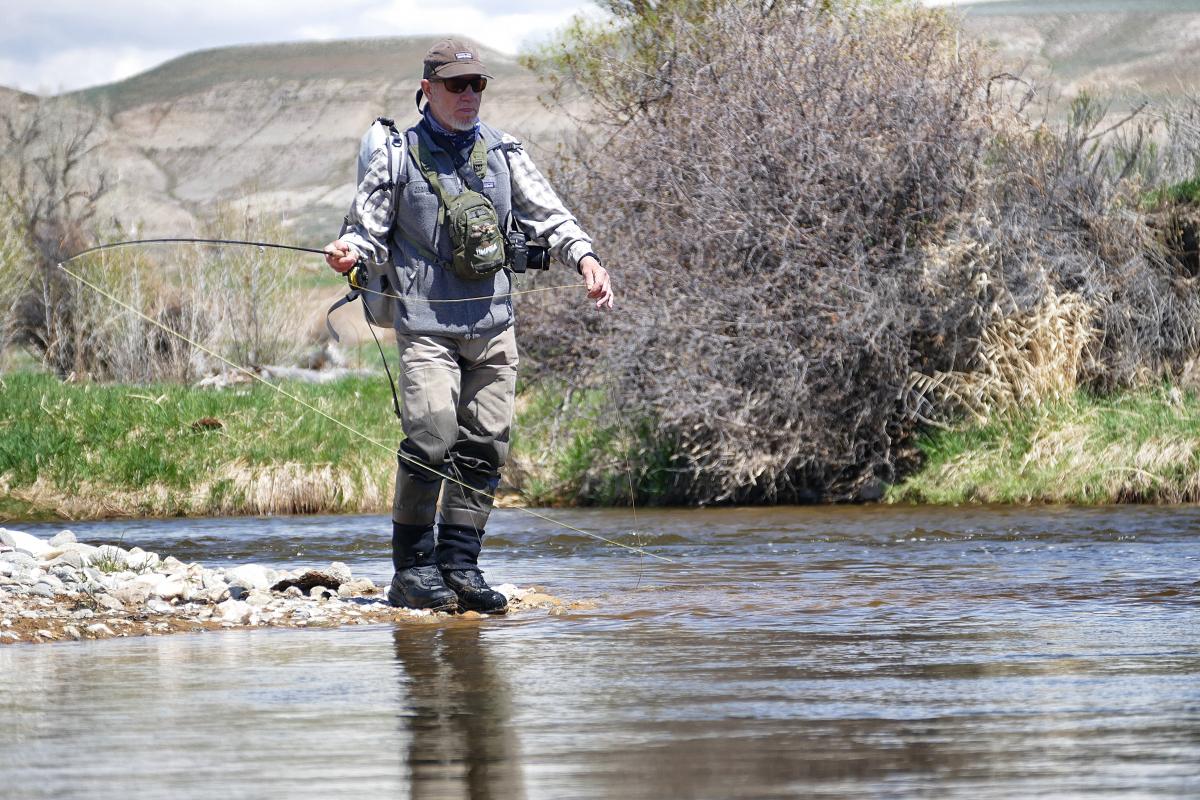 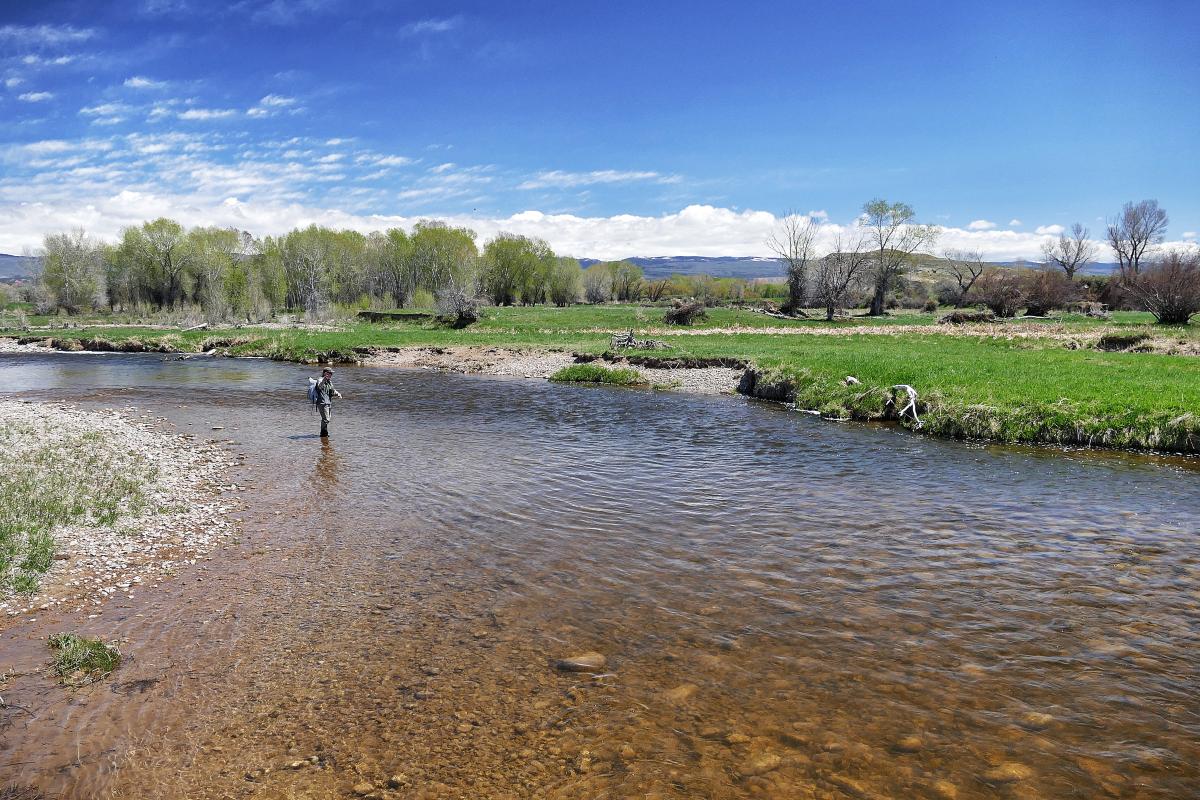