Wyoming: The Lead-up to Runoff

Last Friday, I had a very interesting and entertaining Zoom conference call with Matt, Evan and Michael. One of the questions I was asked is, "What is it like in Wyoming right now?" 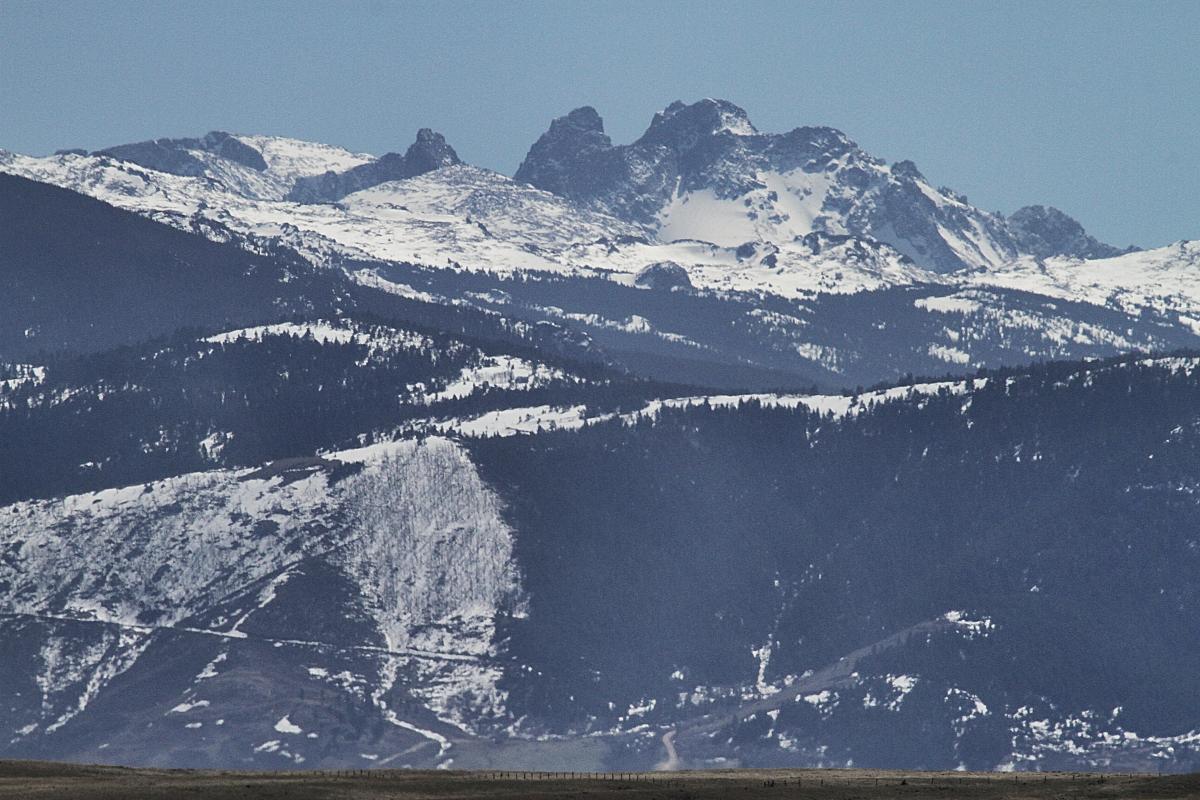 Well gentlemen, here is what we have been up to in the last 10 days. This should give you a feel for Wyoming in late-April/early May.

First of all, the blizzards and COLD weather are hopefully over. There are no guarantees, but I think we've thrown the switch from blizzards to thunderstorms. In winter's wake, the mountains are laden with snow and crews are busy opening up the high country roads and repairing the damage from blizzards.

The fishing has been great lately. The days leading up to runoff are usually sensational. The fishing just gets better and better until it suddenly stops. The melting snow drastically lowers our streams' temperatures as it raises water levels. In addition, most streams become off color and rambunctious as they make their way to the prairies.. One wonders how any trout could survive in the white water, but survive they do. They emerge healthy and ready to eat in a month or so.

Runoff literally began while I was on the river last Thursday. The stream started off gin clear, but as the temperature pushed 75 degrees in the afternoon, the water came up and became cloudy. The fish in the photo above was the last fish I caught, and probably will catch, in this stream for at least a couple weeks.

So, when runoff begins, we turn our attention elsewhere. 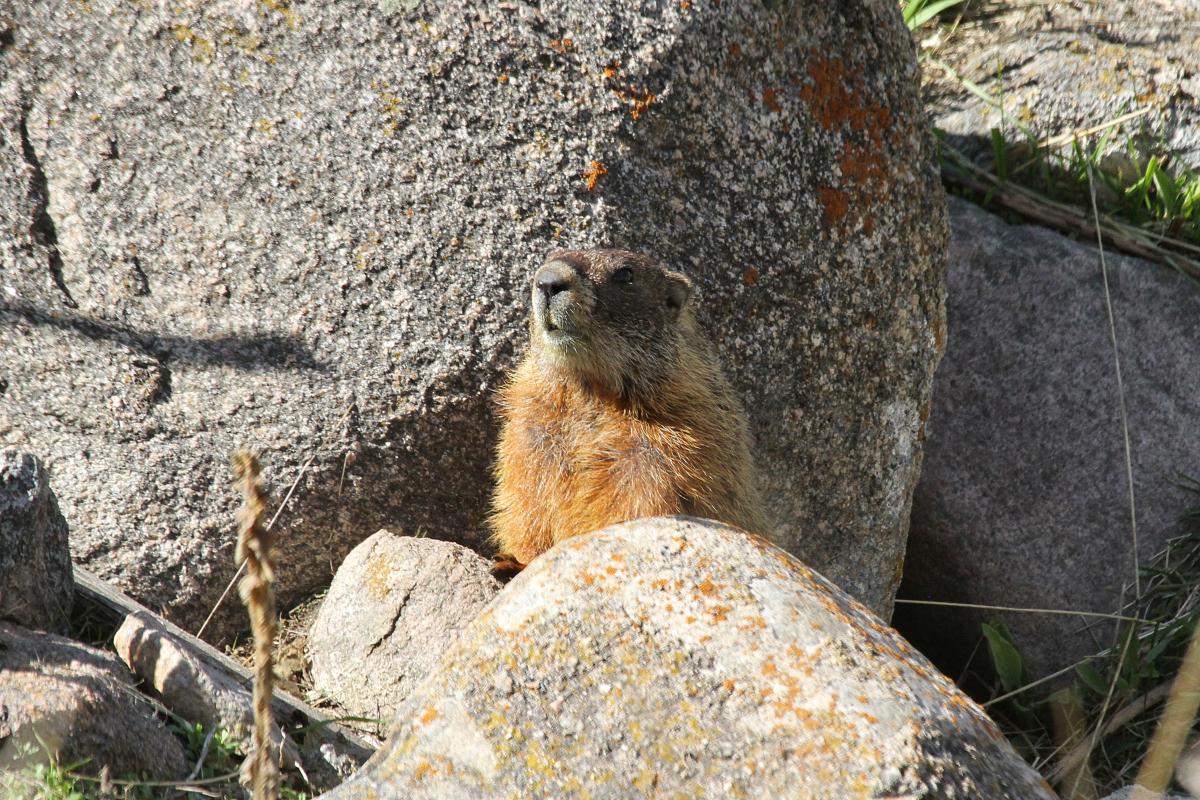 One choice is to visit local ponds. Fish grow big in some ponds.... Alaska big... Kamchatka big. Some ponds have trout, some have bass, some have both! 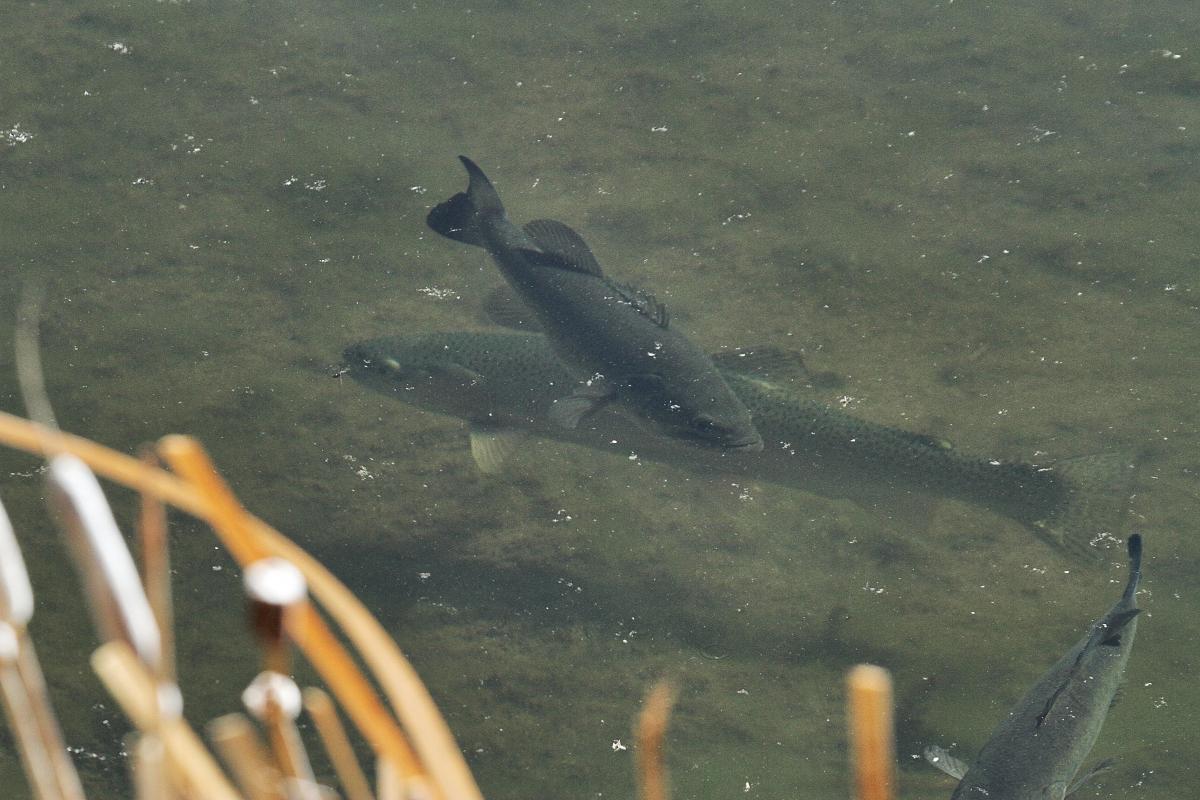 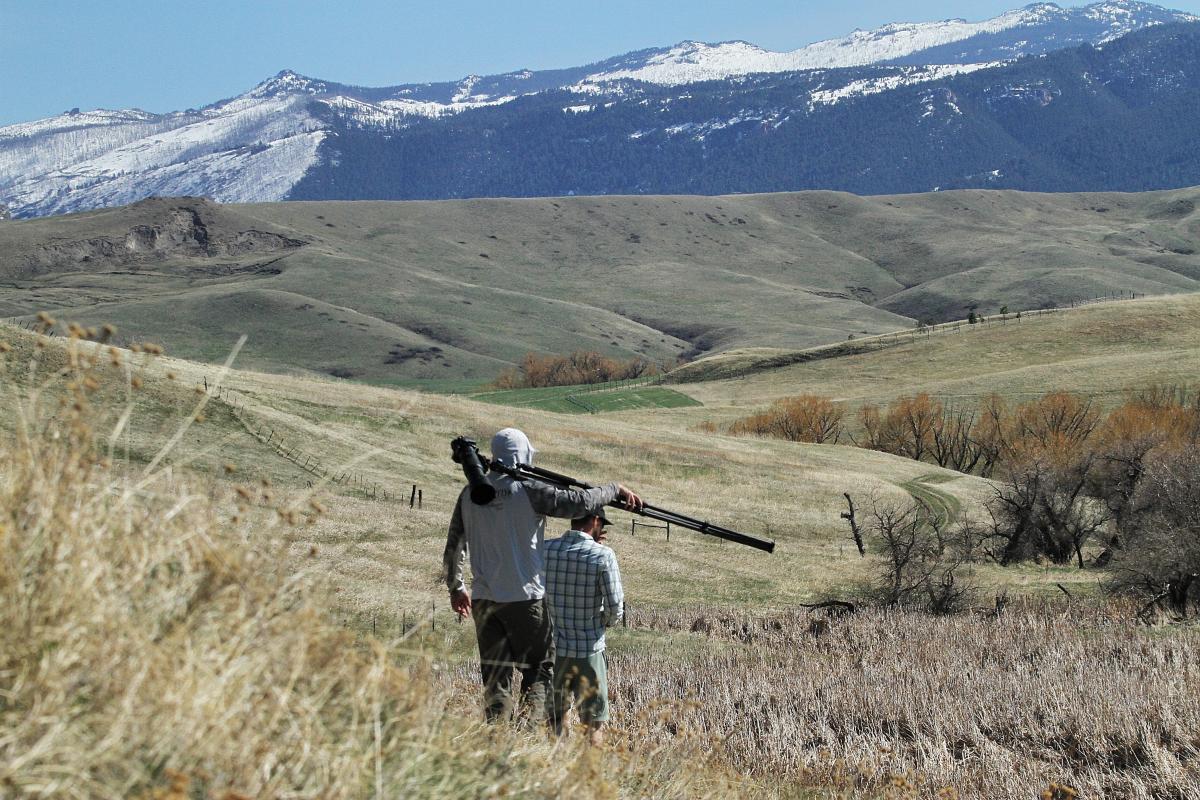 At the end of last week, we visited a pond hidden in the foothills of the Bighorns. We shot a few photos early then worked on some drone footage which I hope you will be able to see soon on Youtube. We started off slowly, but by the end of the day, we were catching 25+" trout. 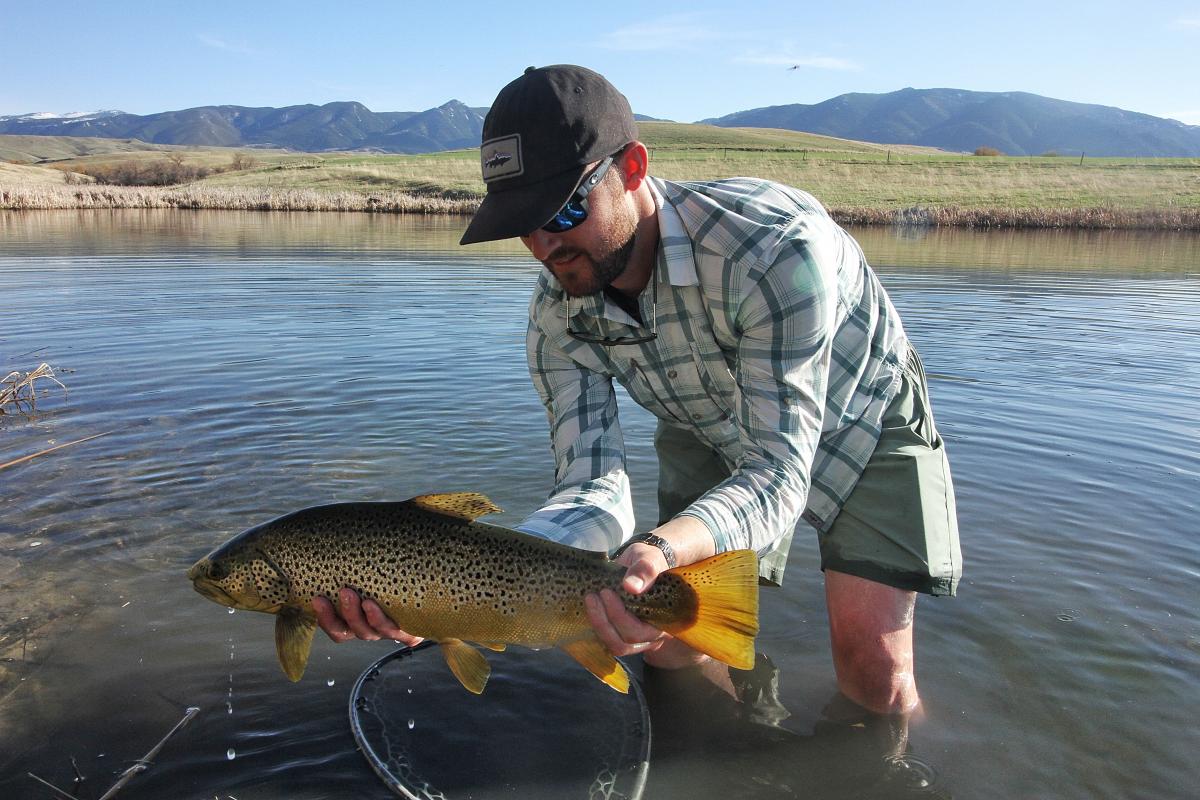 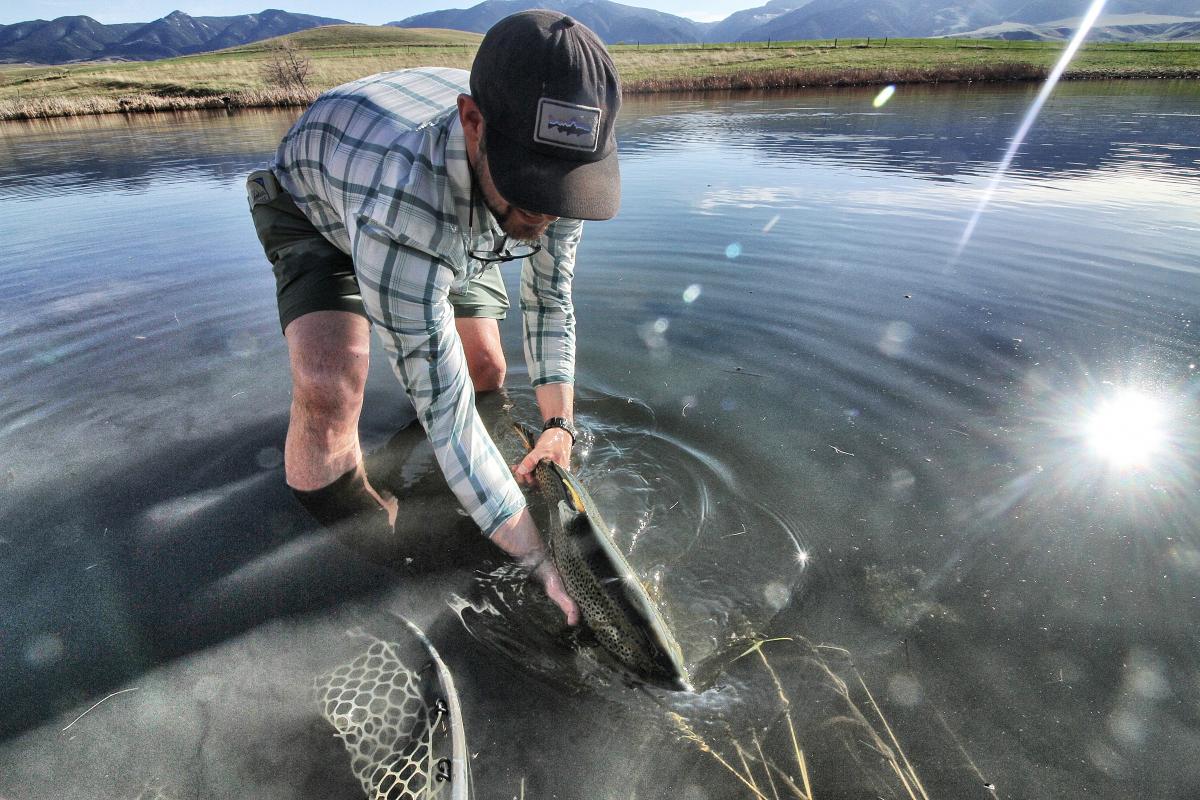 Angling Destinations' Peter Widener acted as my guide. He spotted cruisers for me from a hill behind us. As I was looking right in the sun at water level, Peter told me when a cruiser was approaching. AD office manager Hank Welles ran the drone and provided appropriate commentary. We fished small dries and small nymphs. These fish were hot and often jumped. Peter expertly netted and landed my fish. Catching a 25" trout on a size 18 fly is a thrilling way to spend an afternoon. But, I must admit, I whiffed on a few bigger fish (which only makes me want to get back out there again soon). 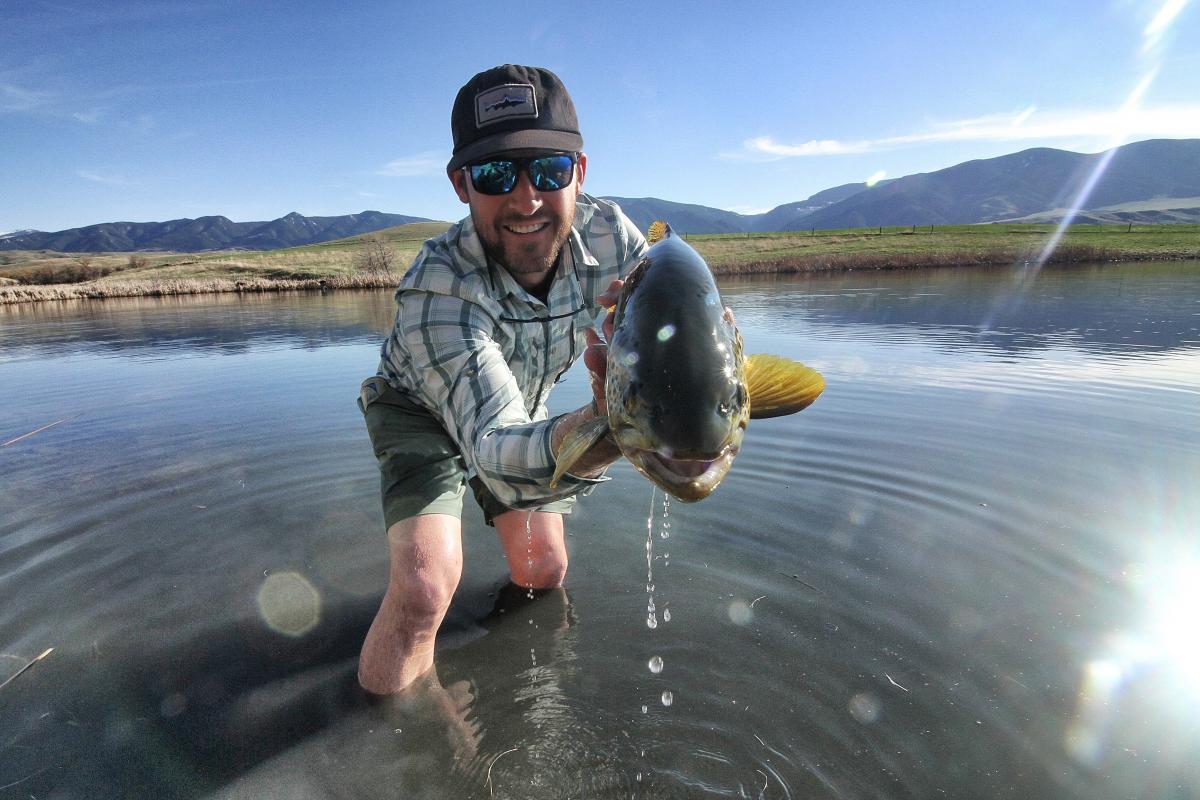 So gentlemen, this is what I've been up to lately!