Peter and I were on a mission. We had been given the task of assessing the fishing potential of a small ranch on the west slope of the Big Horn Mountains. I know the area, but not well. I do know that beautiful and productive streams abound on this side of the mountains. I know that I've been lucky enough to fish quite a few of these streams with great success. I was therefore ready to jump on the proverbial grenade and assess the fishing opportunities on one of the gems in this area. Yes, I'm a saint and yes, my job does not suck...

Early in the morning, Peter and I climbed through a thick fog to reach Powder River Pass. We saw the promised blue sky as we dropped into spectacular Tensleep Canyon. We took a left in the tiny town of Tensleep and followed the Nowood River south. We were a bit apprehensive as we watched the mocha colored waters of the Nowood slide by, but soon felt encouraged as we took another left onto a dry weather road. We rolled on through windbasted sandstone cliffs until we reached the Main Fork. At the log gate of the ranch, an old rusted plow sat resting in a field of dandelions. The river valley was beautiful. Verdant green fields were framed by red sandstone washes. Behind us, limestone canyons soared into the blue Wyoming sky and pinched the stream down to a jumpable width.

The North Fork Ranch encompasses 160 deeded acres. Certainly expansive, but what makes this ranch exceptional is the "tens of thousands" of accessible public lands adjacent to the ranch property. While the South Fork's and the North Fork's confluence is smack-dab in the middle of the property, downstream of the ranch, another mile of the creek is open to the public. Here, the main creek traces a serpentine path through a beautiful valley. Above the ranch, miles of public lands stretch in all directions. If you owned this ranch, you would in effect have access to a huge, virtually untouched, wilderness. Talk about "Bang for the Buck"!

If you want to enjoy some Wyoming peace and quiet, the North Fork Ranch is literally at the end of the road. The UPS drivers won't go any further on the dry weather road we came in on. I think we saw a half dozen vehicles go by all day and they were ranch pickups and 2 Washakie County Weed Control vehicles. Go here for info on the North Fork Ranch. The ranch is listed with Pfister Land Company. FYI, I have no vested interest in the sale of this ranch... although if you buy it, PLEASE let me come fishing every now and then! 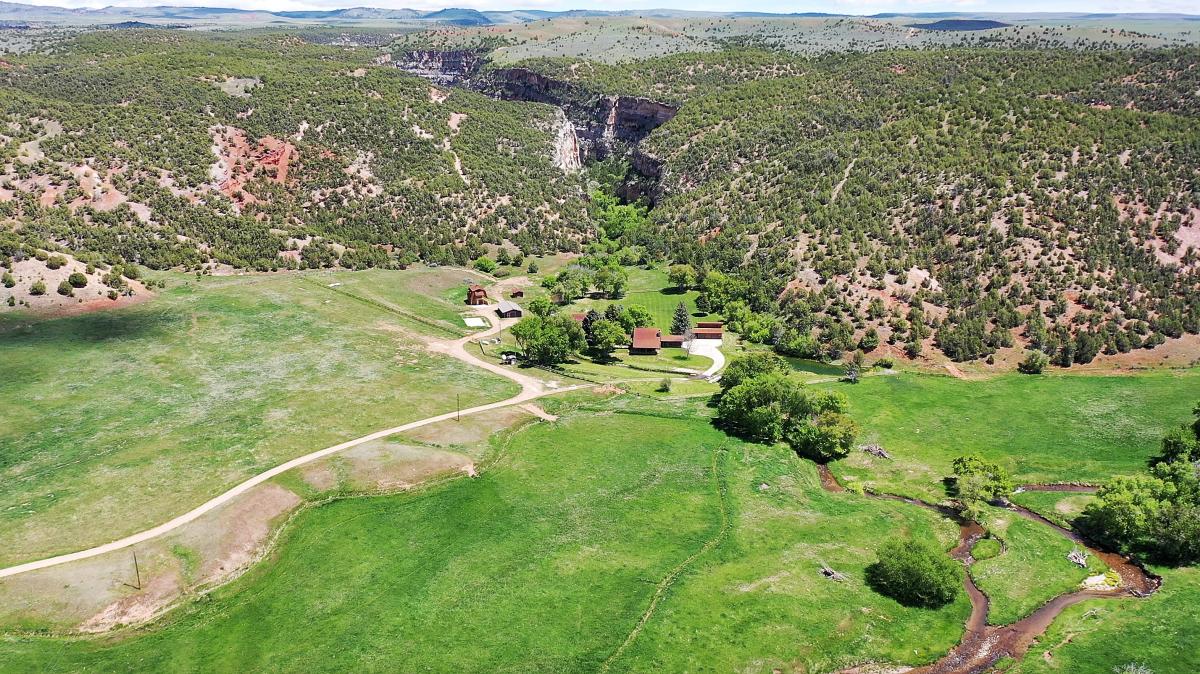 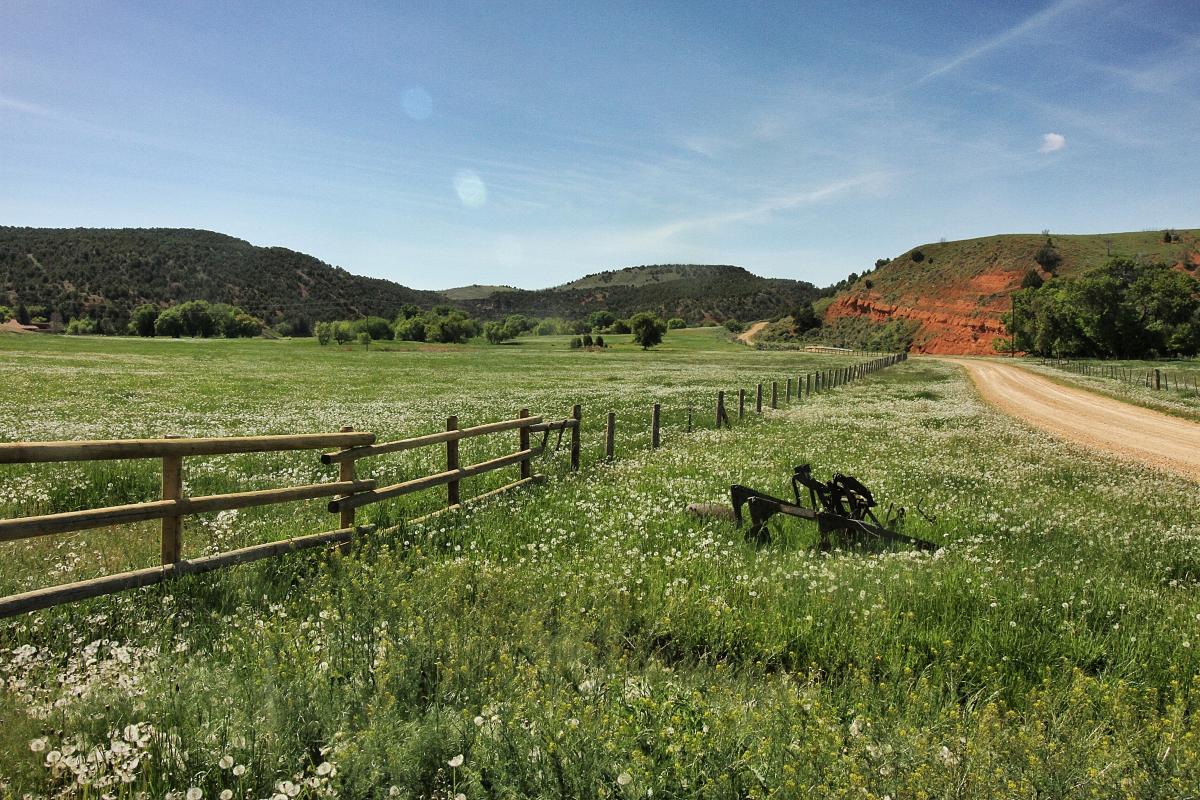 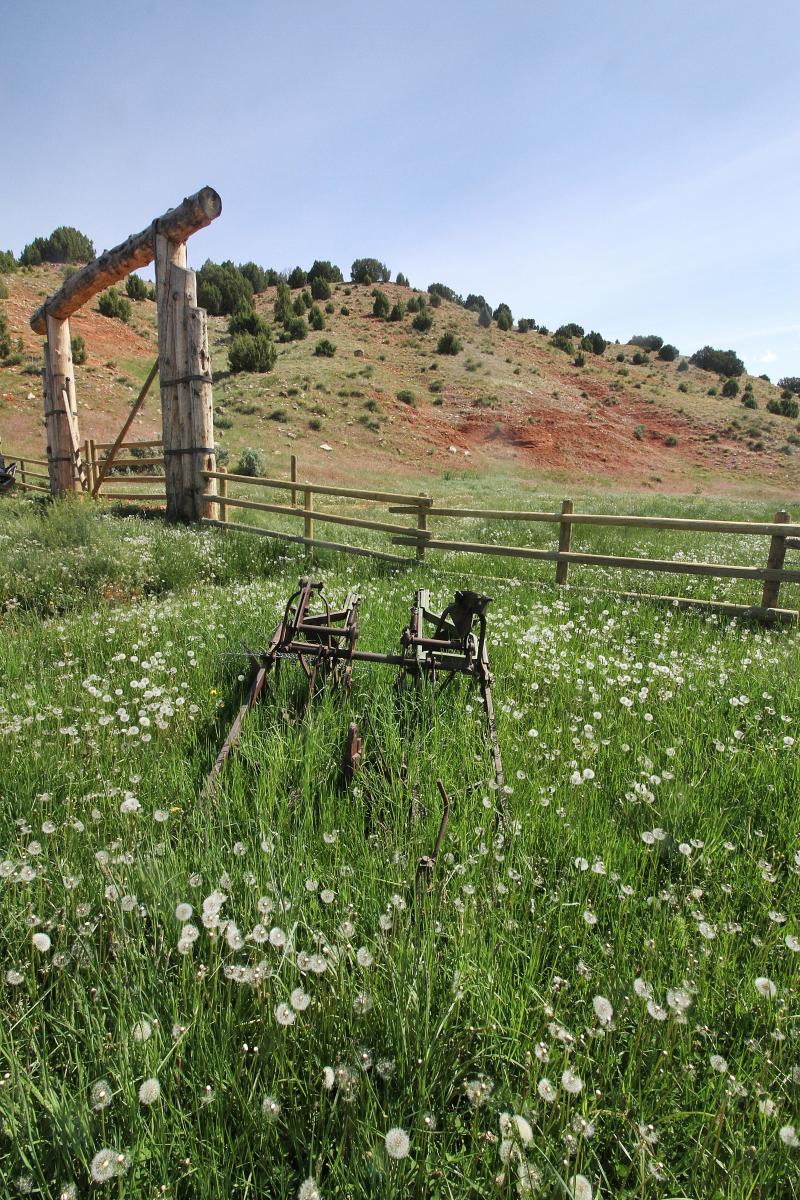 Enough sightseeing... it was time to get to work. Peter and I grabbed rods and hiked downstream. We wanted to work our way back upstream. The stream's fine red clay silt would quickly muddy anything downstream. We wanted to maximize our odds and a red cloud floating through a trout's lair is like shooting fireworks at a grazing deer. We wanted to get a good read on what finned below. We were determined not to get in our own way.

As I made my first cast, Peter unpacked the drone. I had initially put on a chubby black hopper then, hoping for quick success, added a red beadhead nymph as a dropper. I dredged up a little 12 inch brown out of a pretty run then stepped to a better position to probe a swirling boil created where two small channels met. 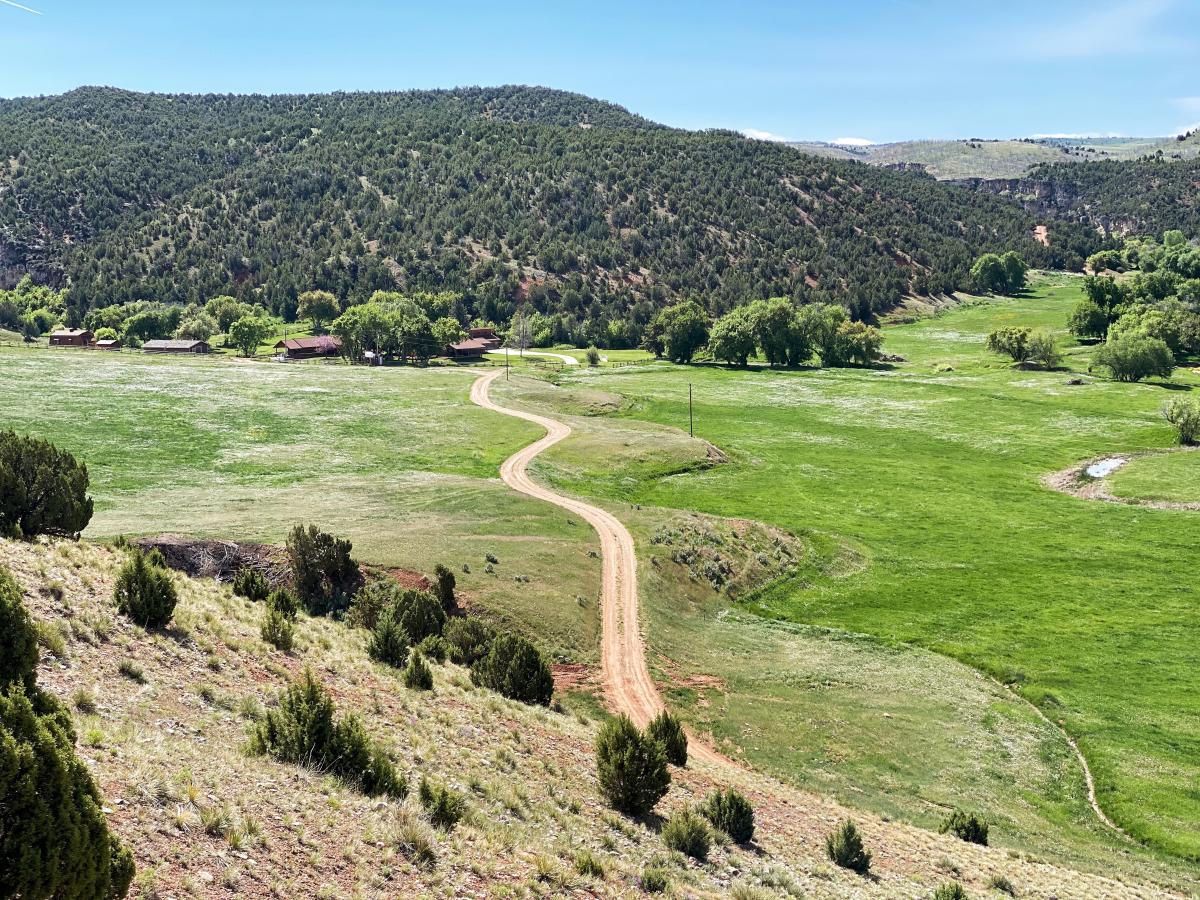 "There has to be a fish here," I told Peter as the drone hummed overhead like a massive bumblebee. On my second cast, a huge brown came all the way out of the water to grab my hopper. In his zeal, he somehow missed the big bug, but pinned the dropper line between his sharp teeth. When I struck, the line slipped though his teeth until he came tight to the nymph.

"Big fish!" I told Peter, then added, " He missed the hopper and flossed his way onto the nymph."

"Dude, I got the whole thing on film!" Peter yelled excitedly.

I worked the fish out of the boil and struggled to control him before he eventually tired. He was pushing 20-21 inches, fat and as colorful as a box of crayons. 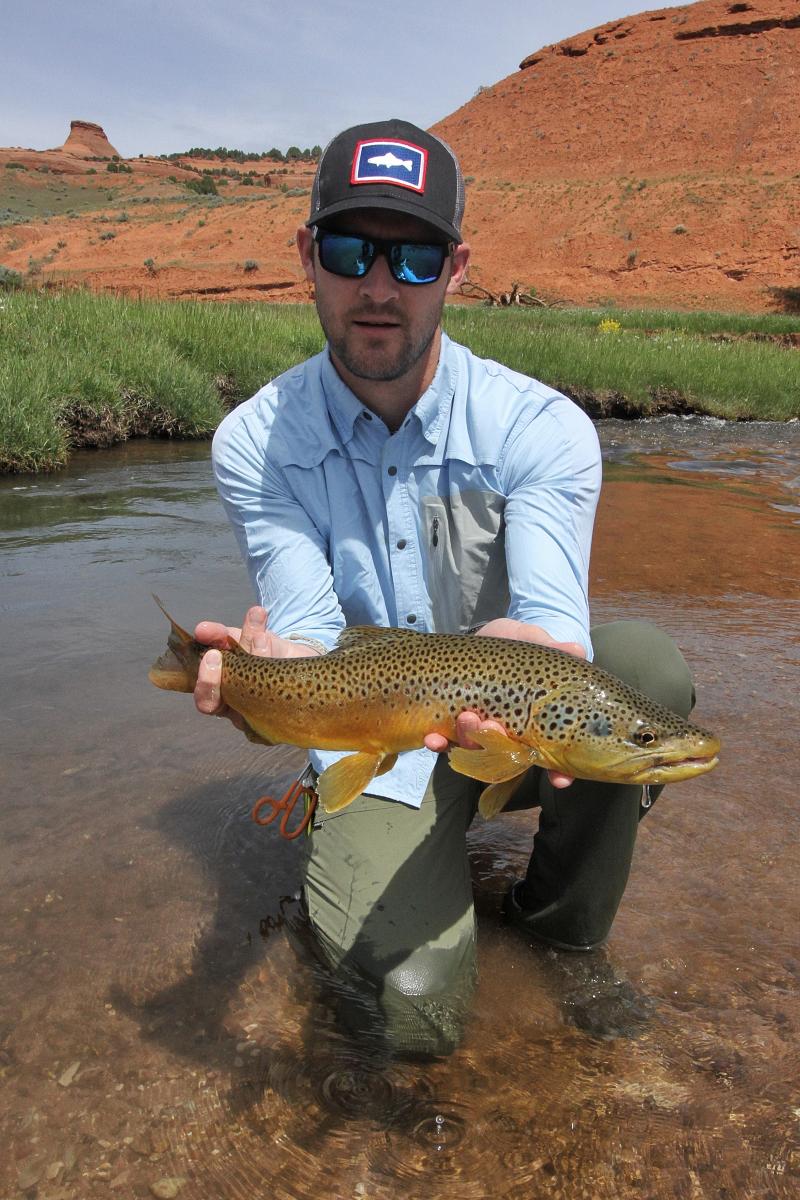 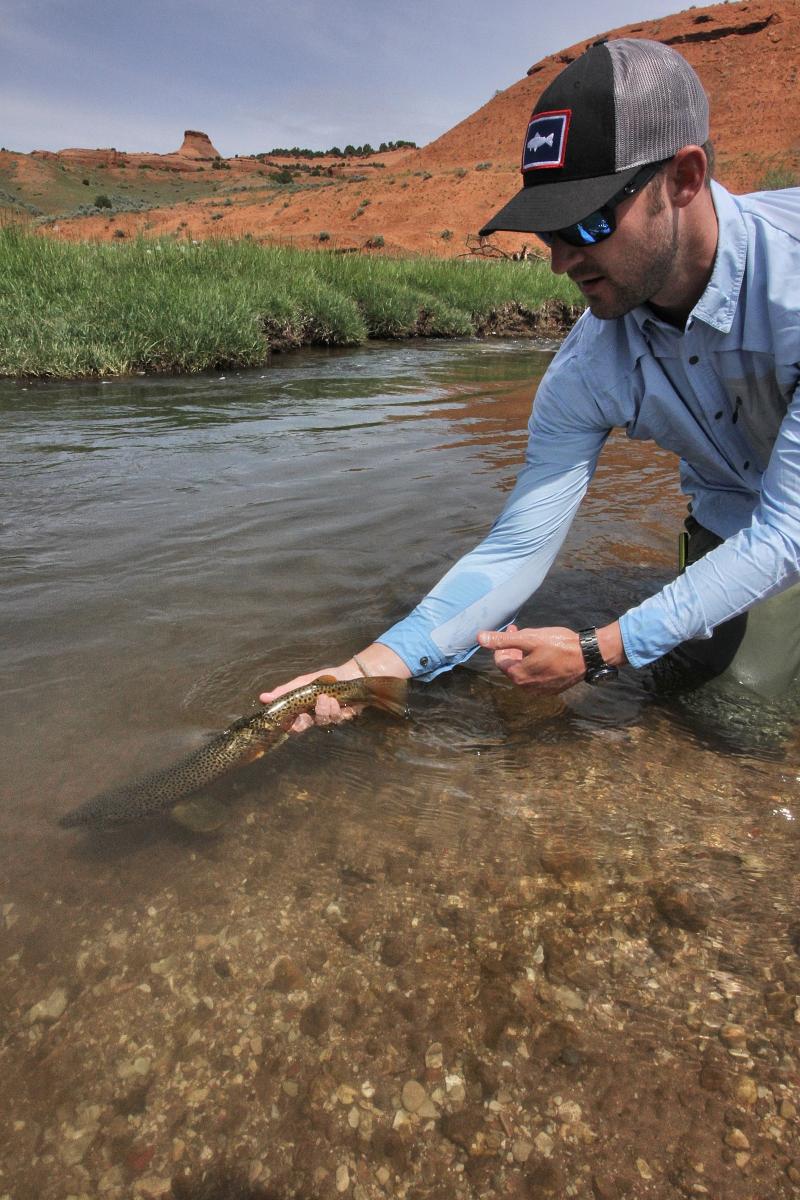 "If we don't catch another fish all day, the drive was worth it." Peter said summarizing my feelings exactly.

Over the next hour, as the sun settled into a perch directly overhead, we tagged a number of fish, but nothing as large as the first brown. But we now knew what lived below. This knowledge infused every cast with a delicious anticipation. After another hour, we decided to take a break, get some water and wolf down a sandwich and a Cliff Bar. Rejuvenated, we crossed the fence to the other side of the culvert and began fishing again. Our intention was to trade fish. In the first riffle, I hooked a solid 19 inch brown and handed the rod to Peter. " 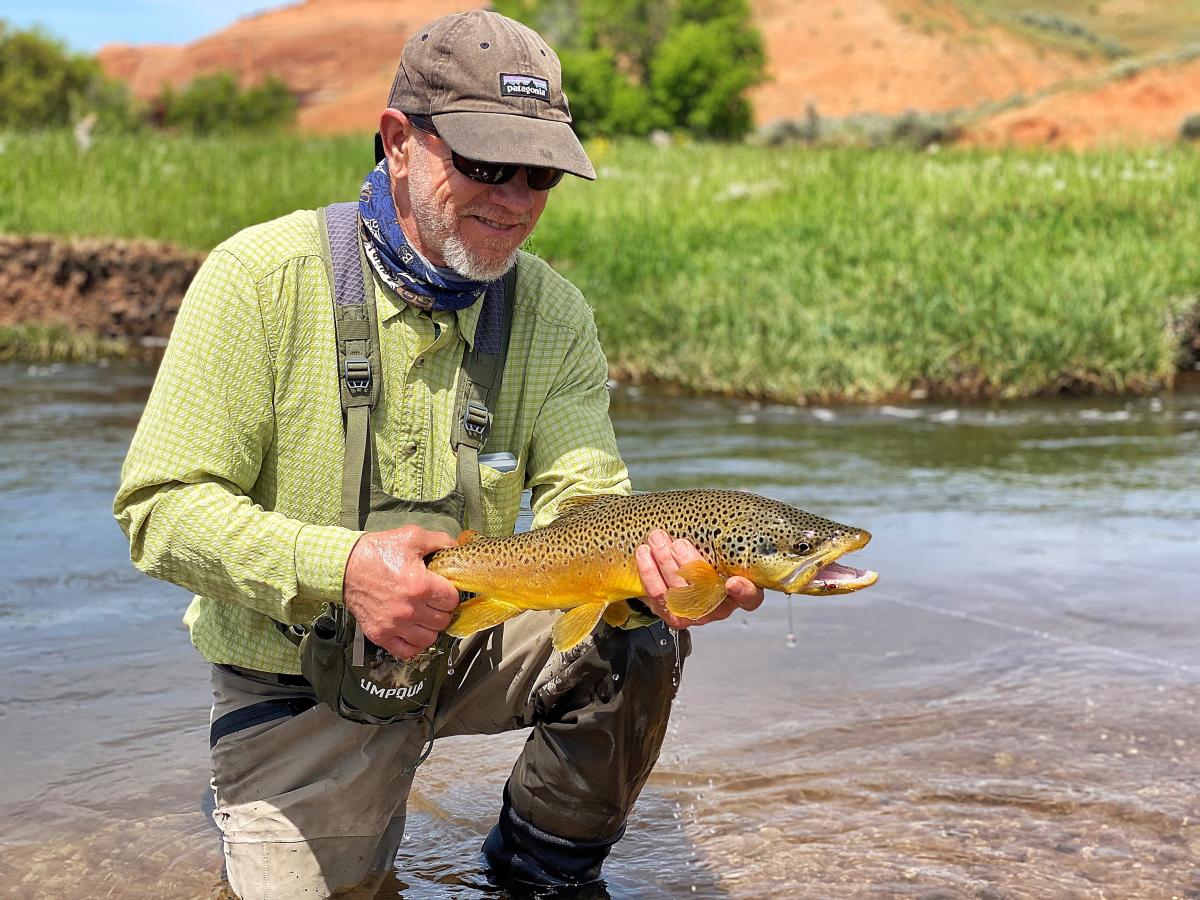 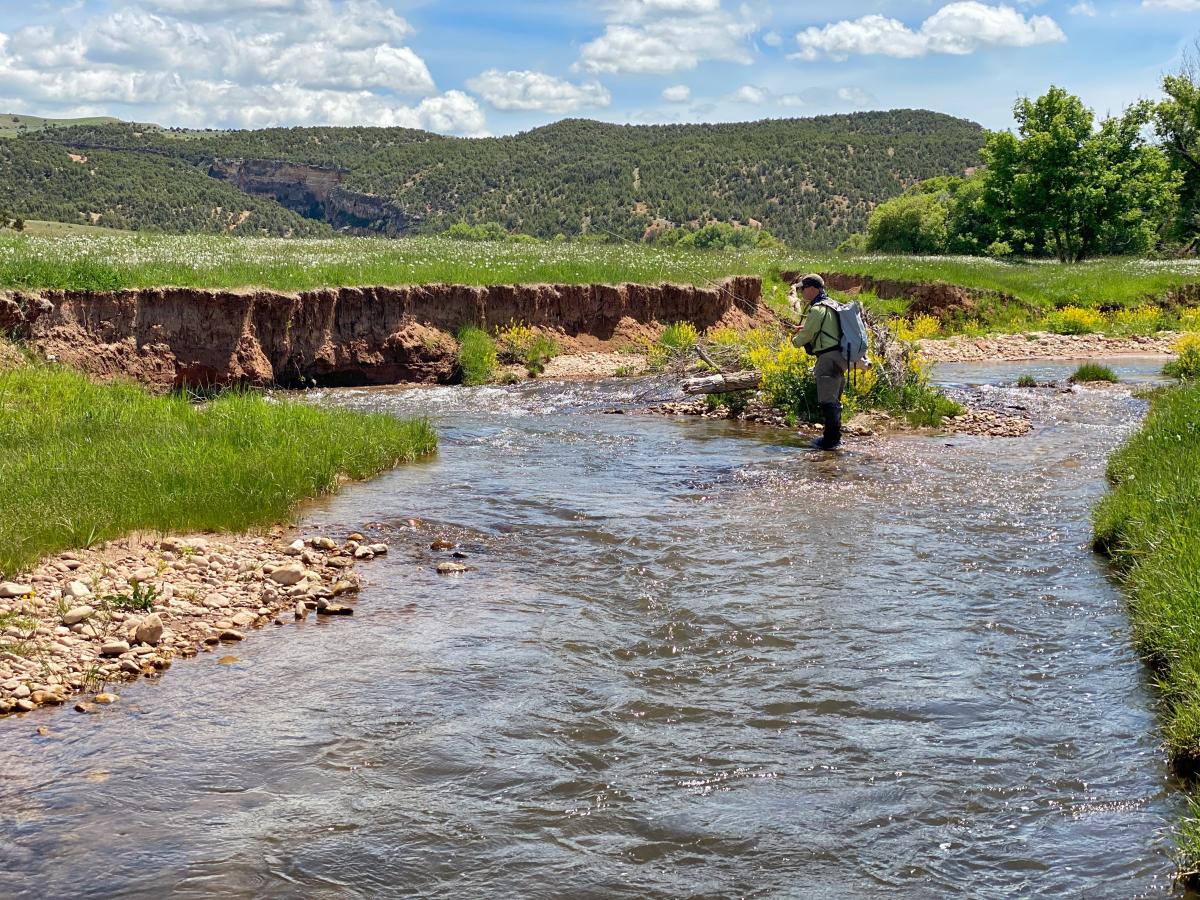 "No, you fish. Catch another, I'll fly the drone." Peter said as he looked up tracking the drone. I did not argue.

I caught a few more browns and a couple brightly colored 'bows in the 14-16 inch range. Then, on the inside of a bend, I  was surprised by another 19-20" brown that slammed my hopper. Invisible in the bright rippled light, this fish was lurking in six inches of water. He hit the moment the fly hit the water. After landing this big buck, I had now caught 60 inches of brown trout with three fish. 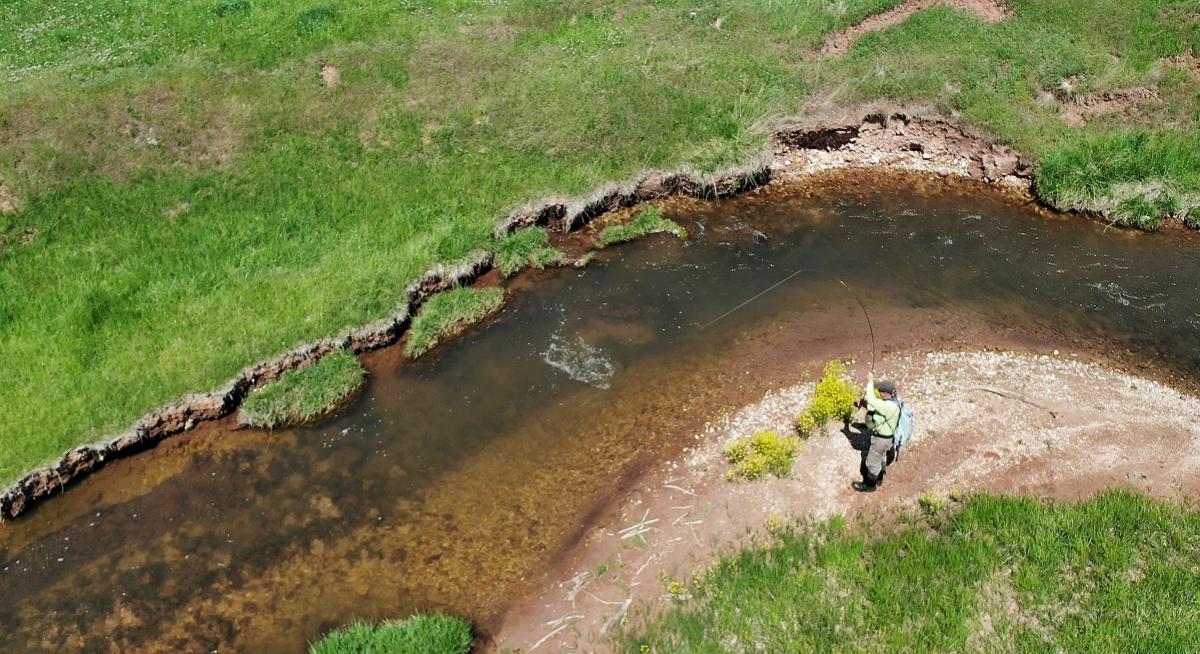 Peter then suggested I try a shelf where the stream took a left bend and piled into a cut bank. Bright yellow flowers lined the bank and the sky was a deep blue. The shelf looked perfect as it created what must be a coveted lie for a big trout. On my first cast, a huge kype jaw confidently glided up to suck in my hopper. As it closed its mouth, the fish dropped down slowly. It was then that I lifted my rod tip to firmly stick the hopper in the trout's upper lip. The fish went crazy...

"Good call Peter... this is a beast!" I yelled excitedly.

Peter landed the drone and I pulled my camera from my backpack. Peter grabbed the fish.

"This fish is well over 21 inches. Can you believe this?" Peter asked as I took photos of him with the brown. We were now over 80 inches of fish on four big browns. 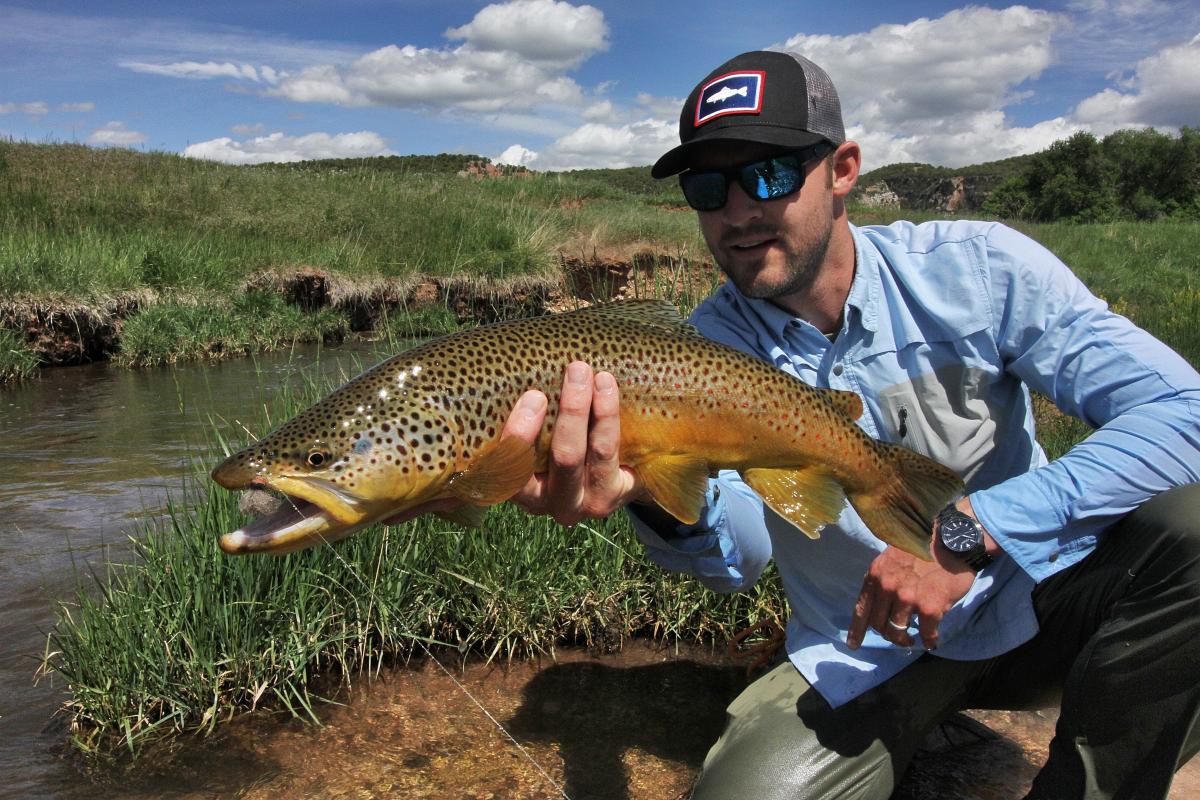 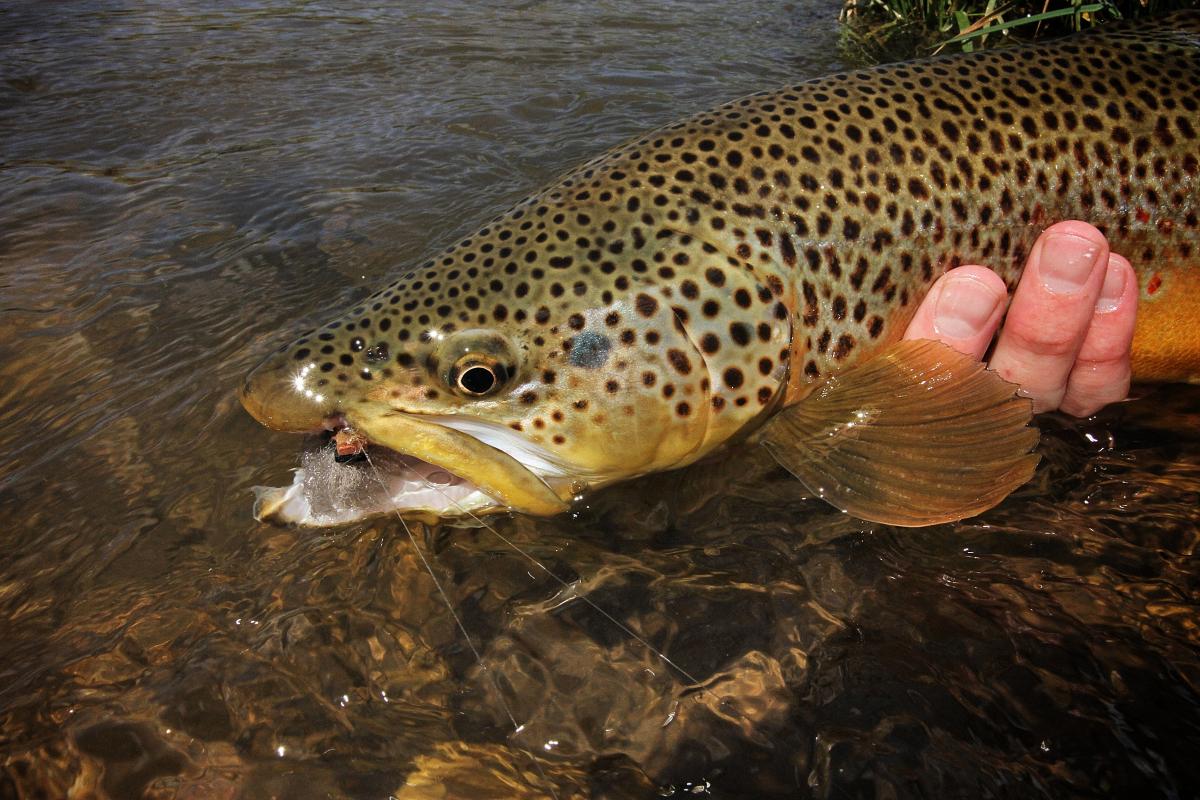 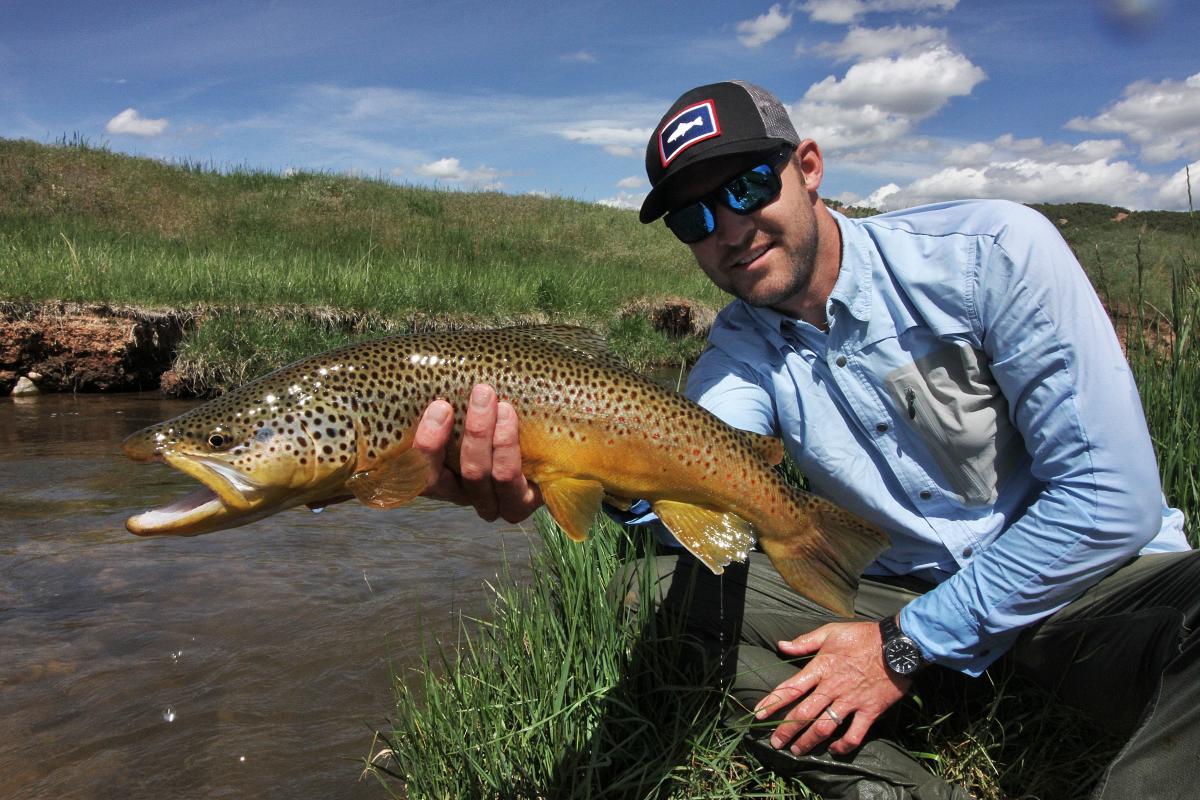 Peter pulled up another huge brown, but didn't get the sharp thing in its mouth. Shortly thereafter, we reached the confluence of the South and North Forks. Peter immediately took off hiking up the South Fork. I called him back. I told him before we did that, I wanted him to put his fly in the shady eddie that ran below the steep cut bank at our feet. Peter complied and on his first cast, he hooked another monster. 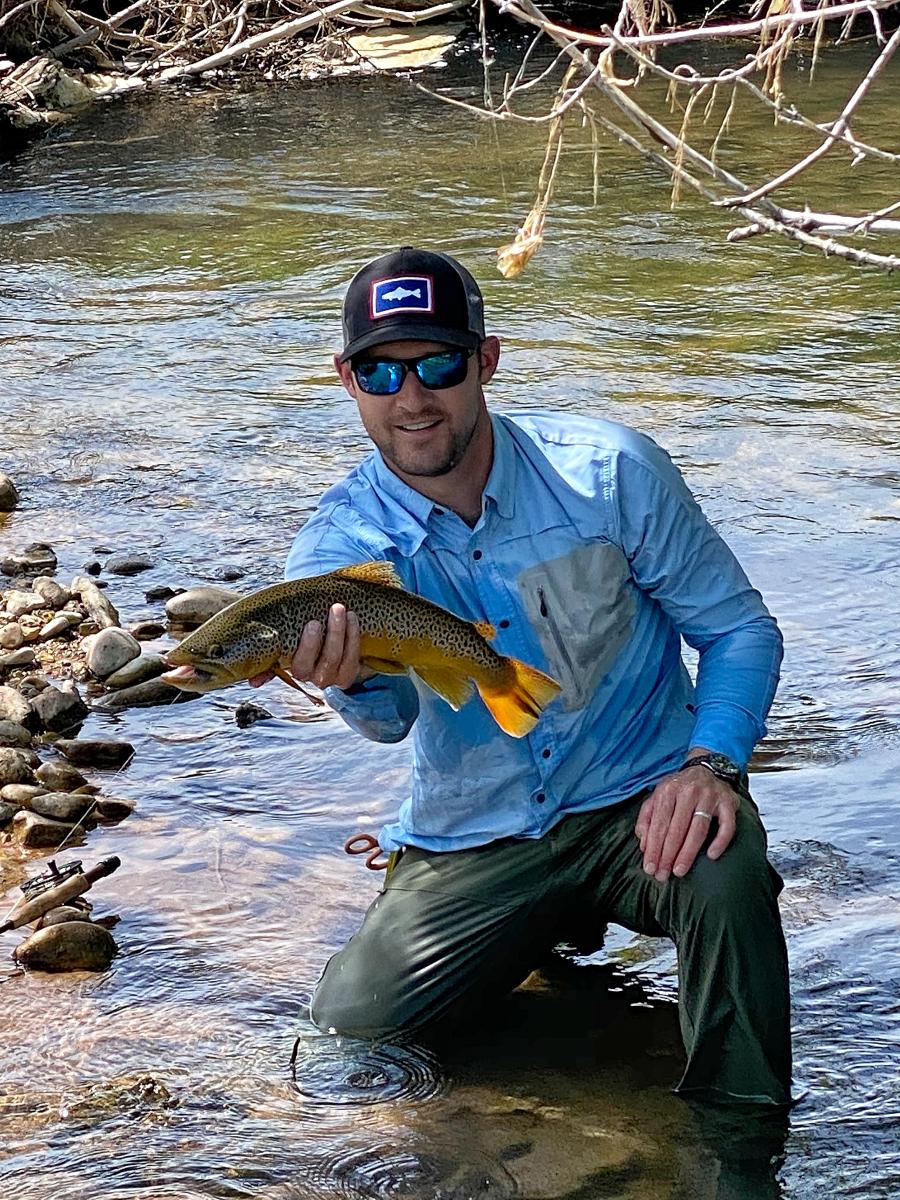 "You gotta be kidding me. This fish was in this little seam. A fish this size in this little eddie..." His voice trailed off as he fought the fish. Soon we were taking photographs and talking about our tally being over 100 inches of trout on 5 fish. Peter had put me on my biggest fish and now I had put Peter on his biggest fish. I'd say this day worked out pretty well.

It was time to go. We would be back! On our next trip, I want to fish above the ranch on this idyillic property and get into the North Fork Canyon. I'm sure there are some real beasts that live in the beautiful pools revealed to us by the drone.