Only in the Amazon and in Wyoming

I had been fishing with a hopper and it had been amazing. Big browns, and a few thick rainbows, had been eating in the style that is their species wont. The thuggish browns had been bullying their way into the best lies. Here, they could take their pick of edible items from the liquid conveyor belt that passed by all day long. For these alpha predators, The prime lies were now either nosing into the shallow riffles at the head of a run or at the very bottom of the tailouts. At both spots, the items on the menu were squeezed by the current into more manageable dimensions. 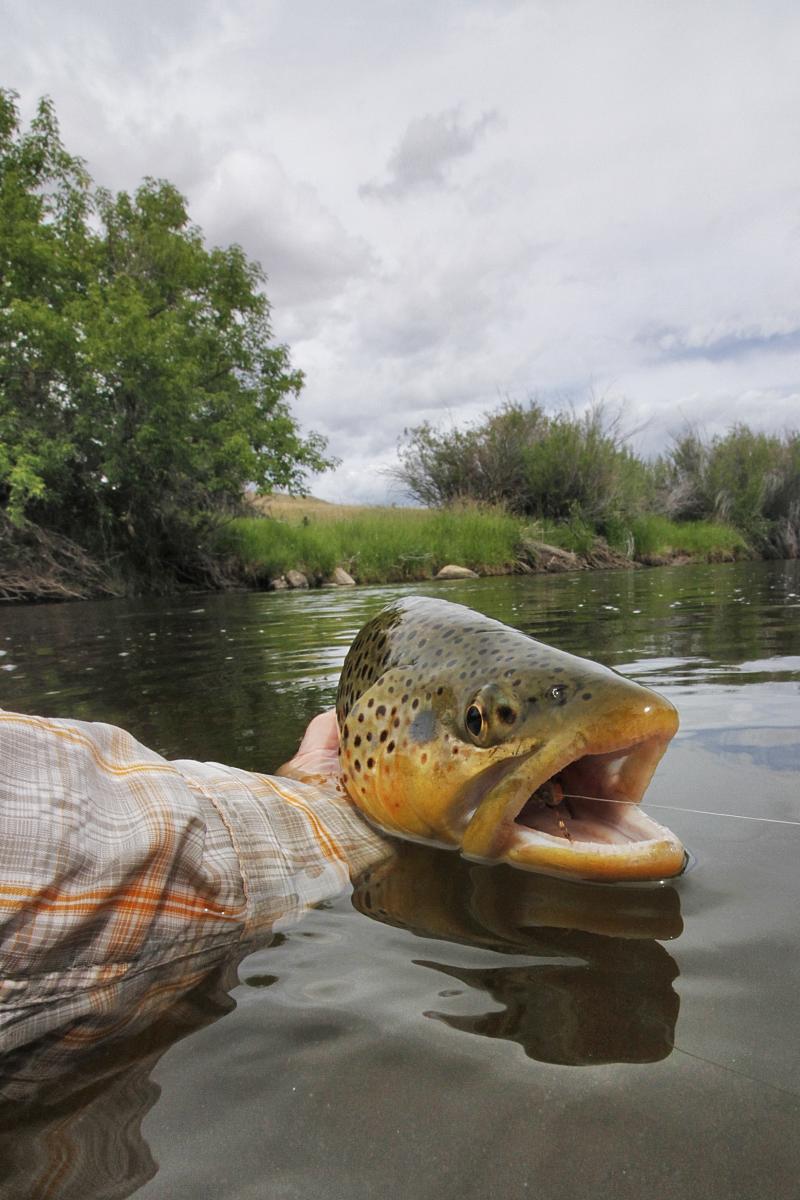 The rainbows on the other hand were acting... well, rainbowish. They were maniacally moving about chasing my hoppers often making slashing failed attempts or mad dashes to get the bug before it drifted past their lies into the lairs of the browns. These takes seemed very undignified especially in contrast to the browns. Once hooked the ‘bows leapt frantically into the air until they were exhausted and finally came to the net. The browns, on the other hand, were sneaky and subtle. Their almost imperceptible takes could be easily missed by an inattentive angler. Driven somehow to raise my rod tip, I often struck at some clue I would be hard pressed to describe. At these times, I was not sure if it was a fish at all only to be surprised by a 20+ inch brown that shook his head as if insulted before making a huge run or a calculated leap high in the air. The contrast between these two species always amazes me. I love them both partly for this dramatically different behavior. 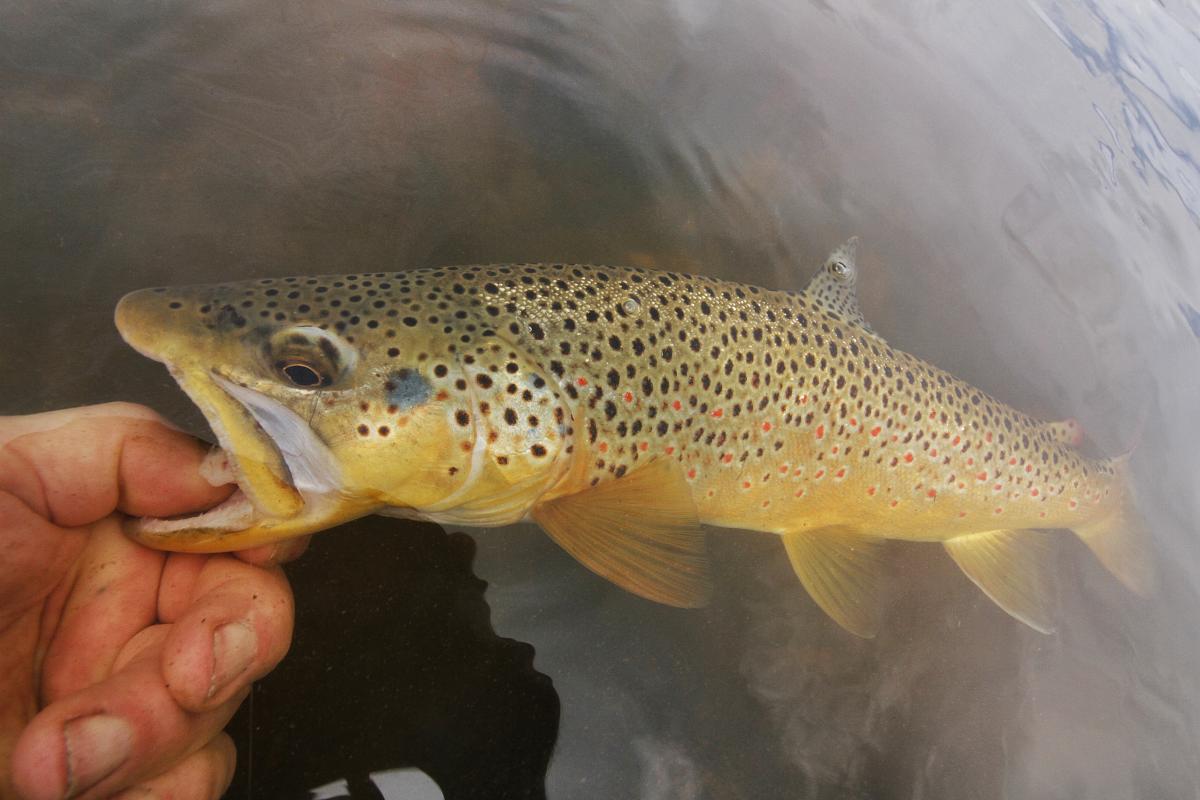 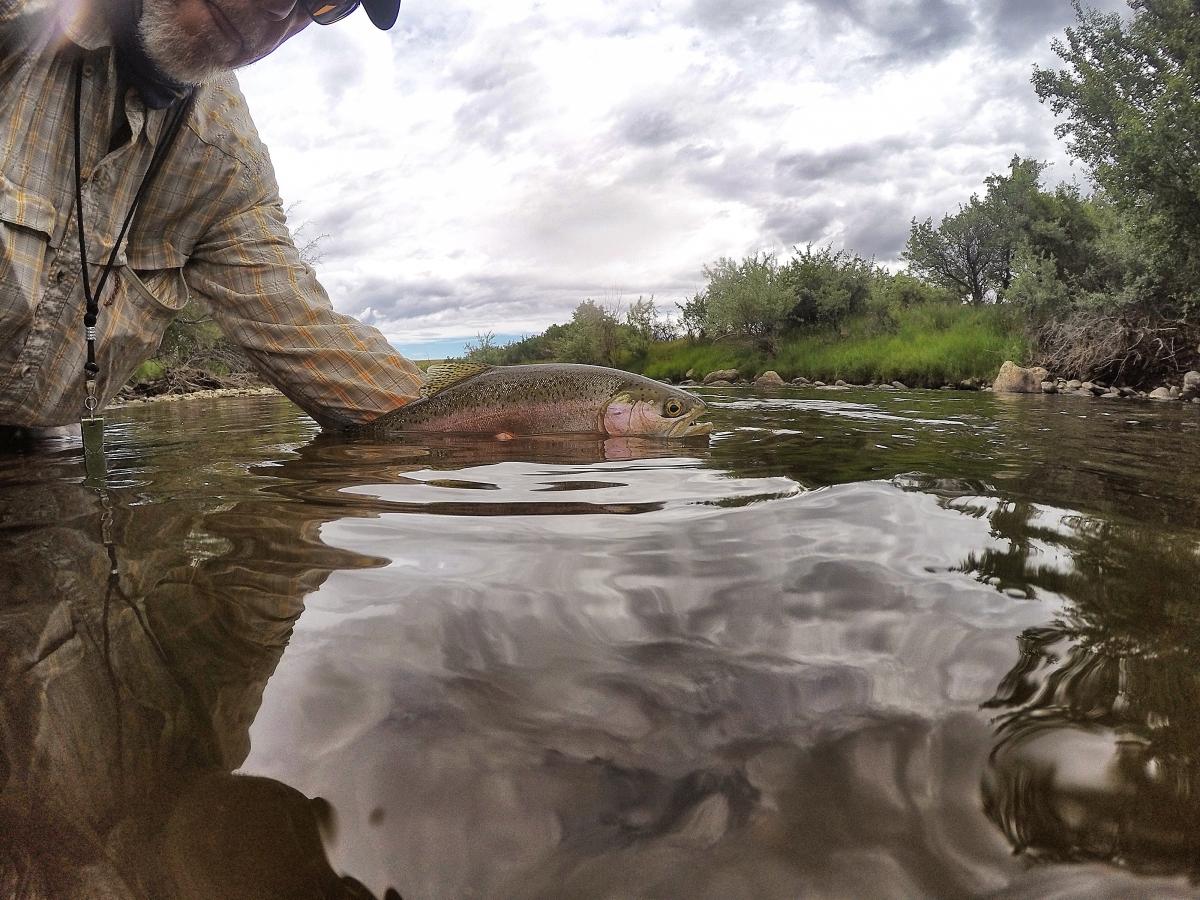 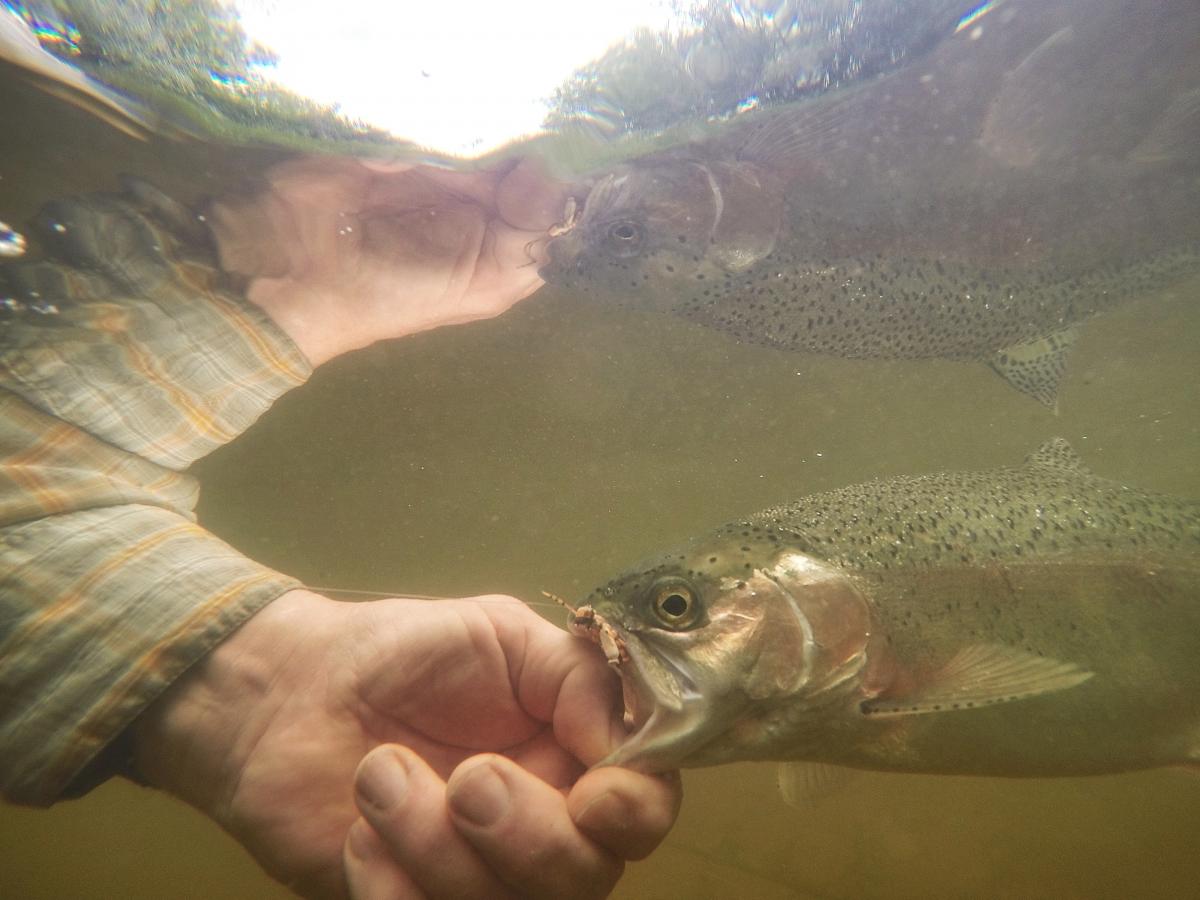 As I was realaxing after my morning's good fortune on hoppers and admittedly, not fully concentrating (now that my fish lust was almost sated), I saw a big brown tail in 8 inches of eddie water pointing toward shore. The fish finned no more than two or three feet off shore. I stopped casting and watched. With a big splash, the brown soon charged the shore pushing a half dozen minnows onto a steep, and now quite wet and muddy, bank. As the minnows flopped about, they slid back in the water where the big trout cunningly picked them off one after another.

I had a thought. I quickly threw my rod at a bush and dumped my pack in the grass. I jammed my hand inside my pack and on my first try, came up with small round fly box that I knew contained a couple old gummy minnows. I had promised myself I would try them some day on trout (I had used them previously in Venezuela for bonefish).

Now was that day! 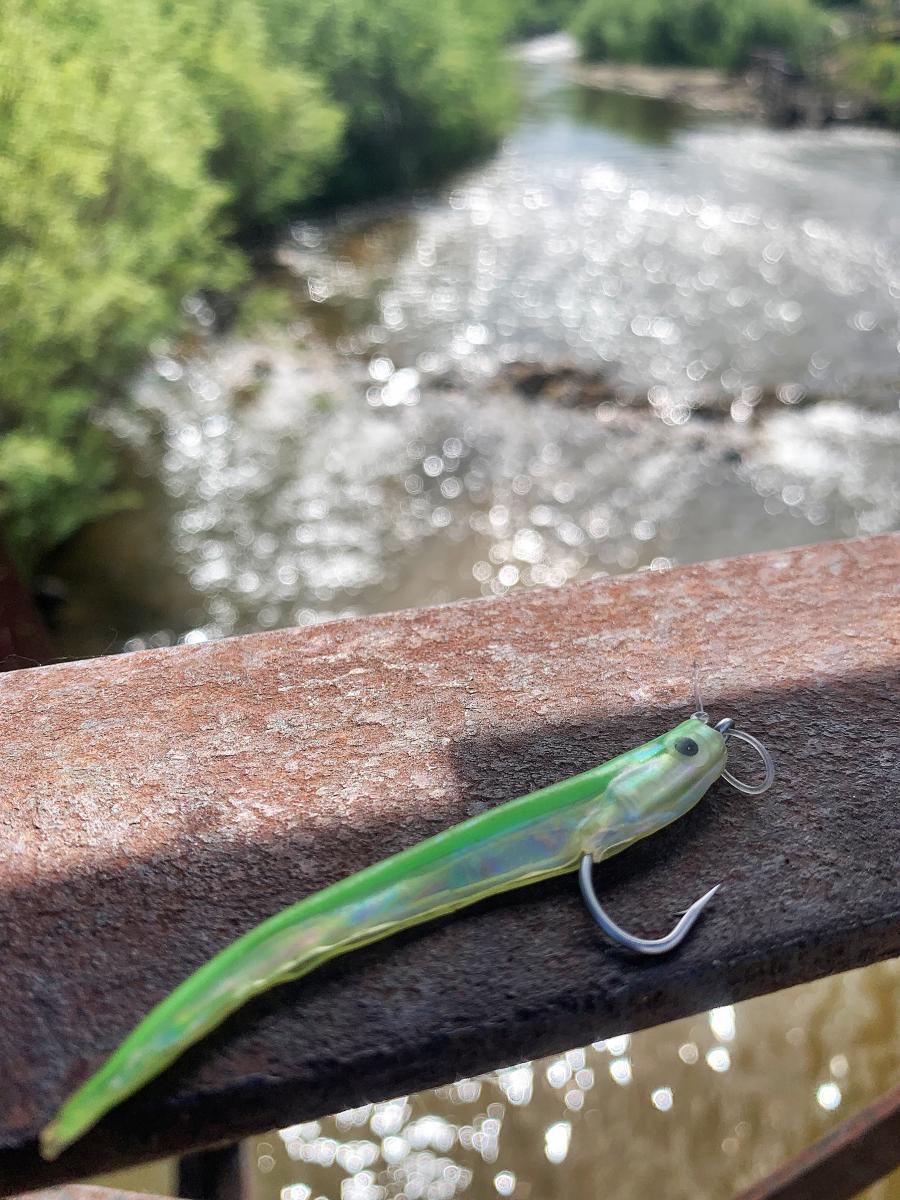 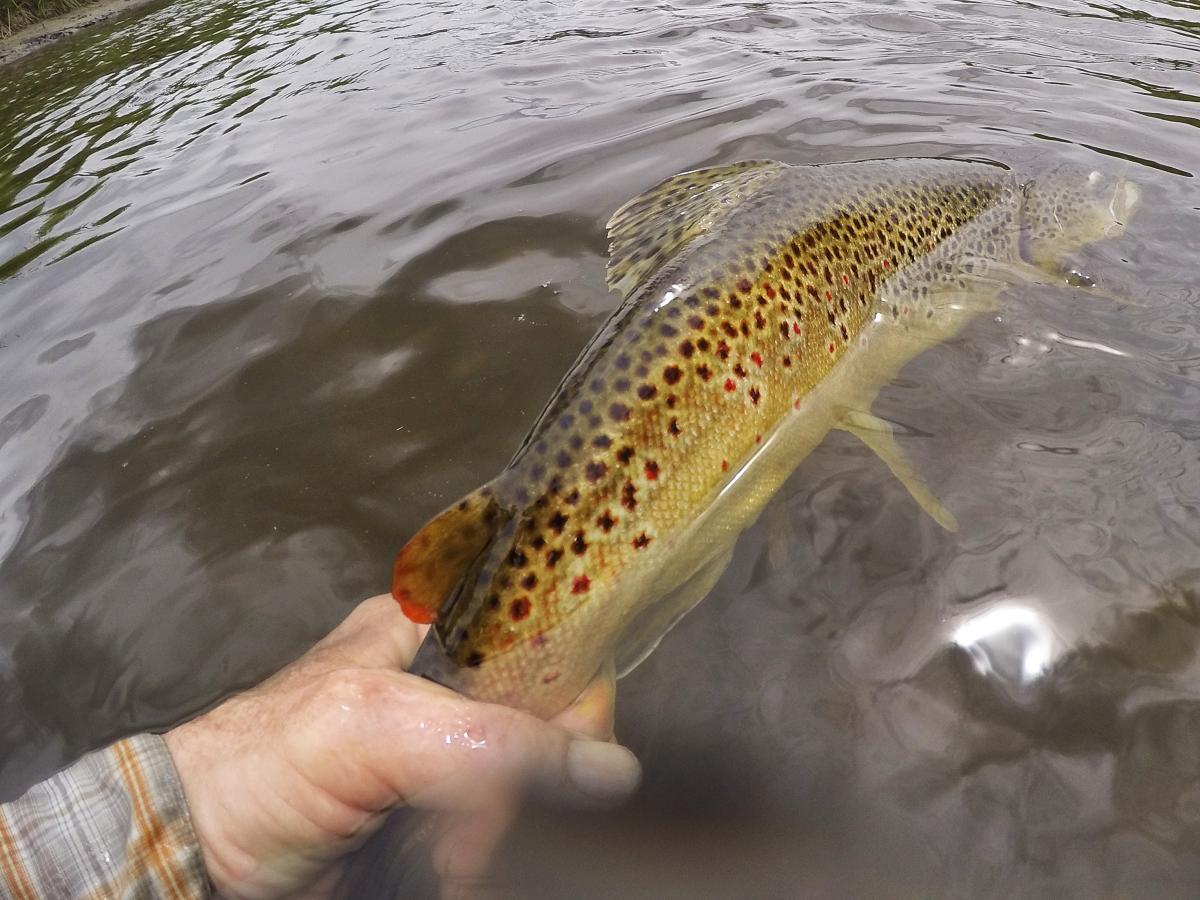 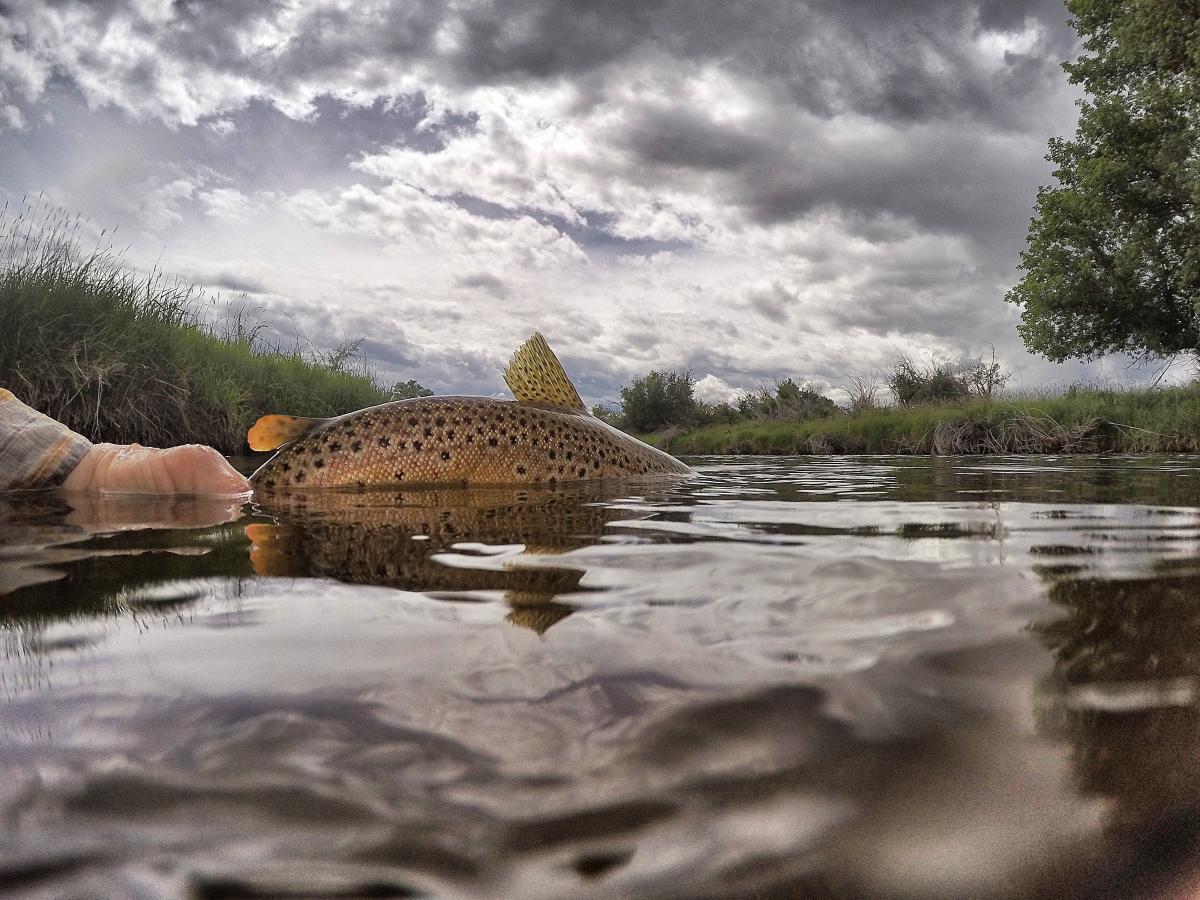 I excitedly threaded the 3X tippet through the gummy's hook eye. Trying not to be distracted, I repeatedly spun the tippet and nervously put the tag in through the loop before pulling the knot tight through a gob of saliva. I threw the whole concoction into the air hoping I didn’t screw it up. The big brown’s tail still finned slowly. The tail pointed the hungry end toward the shore that was my target. I knew if I could make a long and accurate cast across the river, I had a chance to catch this guy. I luckily put the fly about a foot up the bank. A bit too far, but it would work. I quickly took a deep breath, then slowly pulled the gummy minnow back into the water. The big brown charged the gummy throwing another big wake onto the mud bank. I struck and the eddie exploded once again. I’ll spare you the usual details except to say the brown was a very big pissed off male. 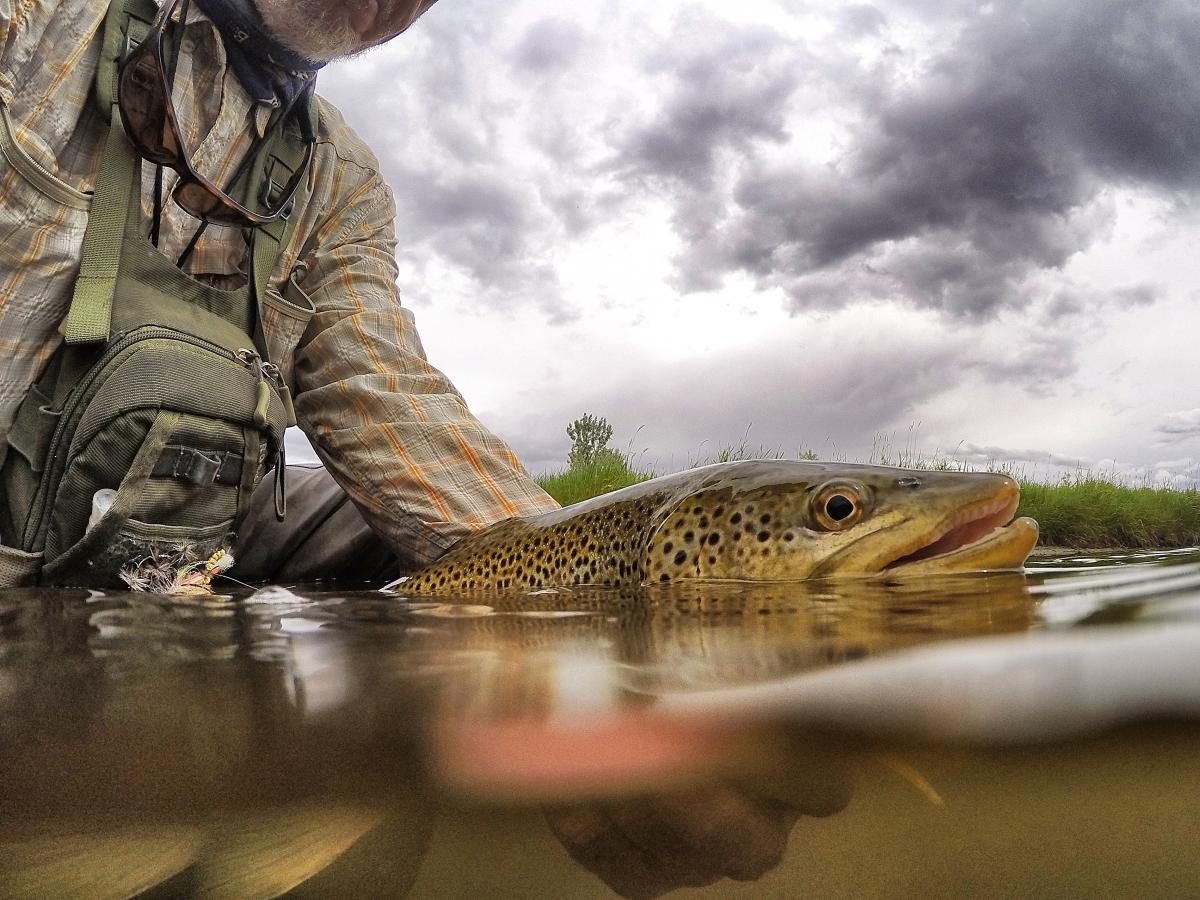 As I released him, I knew this was a moment I would never forget and probably one I would retell way too many times. I remember muttering a series of “wows” to myself as I stood up and grabbed my jettisoned rod and pack. Except in the Amazon when I was chasing peacock bass, I have never seen a predatory fish drive bait onshore then pick them off as they slid back into the drink. Certainly I had never seen it in Wyoming... I probably never will again!