My old friend, Scott Sawtelle, was scheduled to arrive at the end of the month for a week of fishing. After my superb experience with Dan Cerven and Chad Olsen a couple weeks ago, I wanted to make sure Scott and I got to fish the Wind River/Bighorn River in Wyoming on our trip. It's been a great year for that stream with perhaps fish counts a bit down, but the size of these fish is truly impressive. I think it is certainly one of the best "big fish" fisheries in the lower 48. More on this later...

We started our week in the mountains. I had found a new channel that had been created when some beavers with a strong work ethic had dammed the stream's main flow sending the water off on a new course. In the heat of the summer, I had noticed the reduced flow of the old channel and was sure there had to be a new channel syphoning off water somewhere. Sure enough, a new channel had been formed and by the time Scott arrived, the stream had plowed an even deeper rut though many acres of willows and tall grass. I was eager to show Scott what I had found. Unfortunately, wading in the new channel would be at times sticky and demanding, but if my experiences earlier in the summer held true, there would be lots of big 16-20 inch cutthroats in the new track.

On our day (at over 8500 feet), it was very windy. Consistent 25-30 mph winds made it hard to cast. The streamside willows shook as they shed leaves. Bright yellow leaves flew by like confetti often forcing our casts off target. But we perservered aided by a few cuss words. We even managed to catch a few really hefty cutts in the midst of these difficult conditions. Eventually, the setting sun brought enough of a temperature drop to chase us off the water. We had been wet wading and the chill in the air meant there weren't too many days of this left! 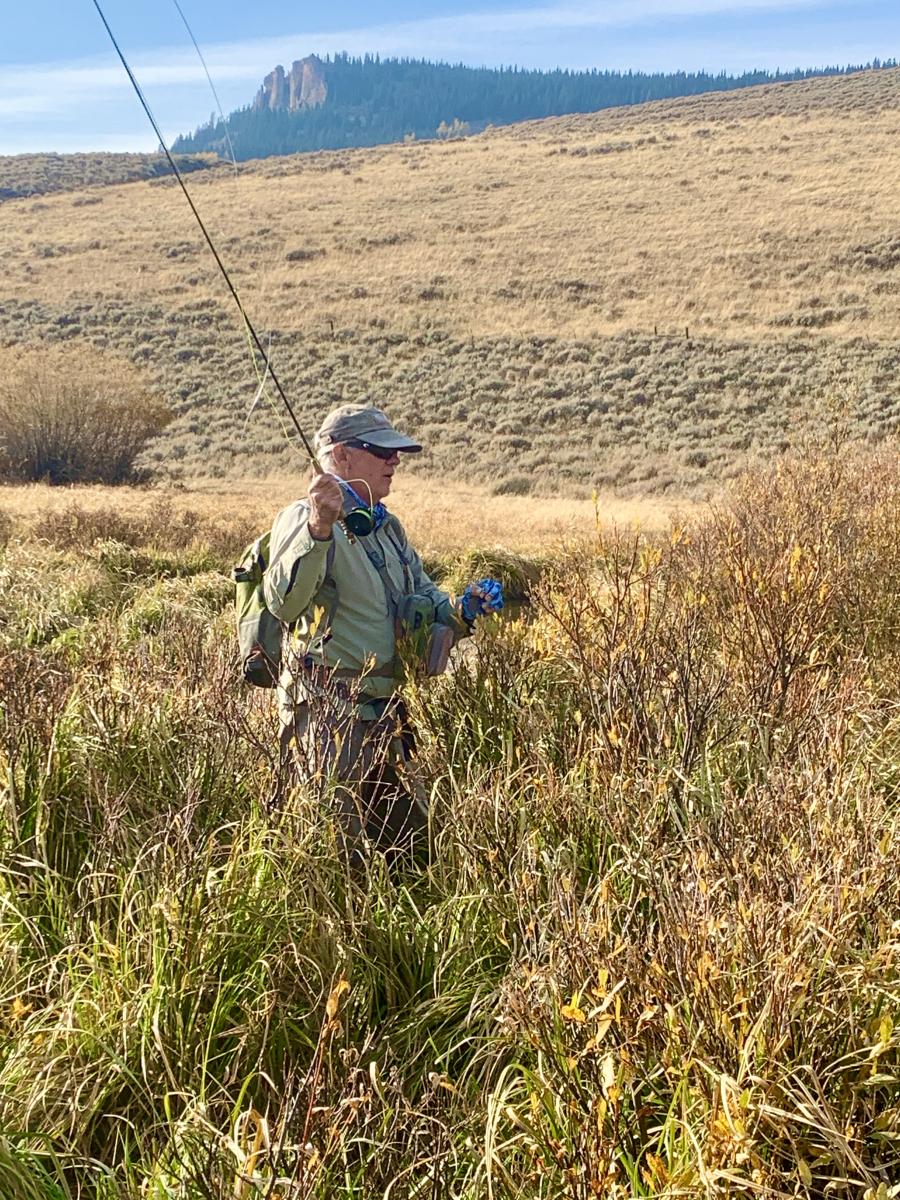 Scott Sawtelle hiding behind a willow to make a cast... 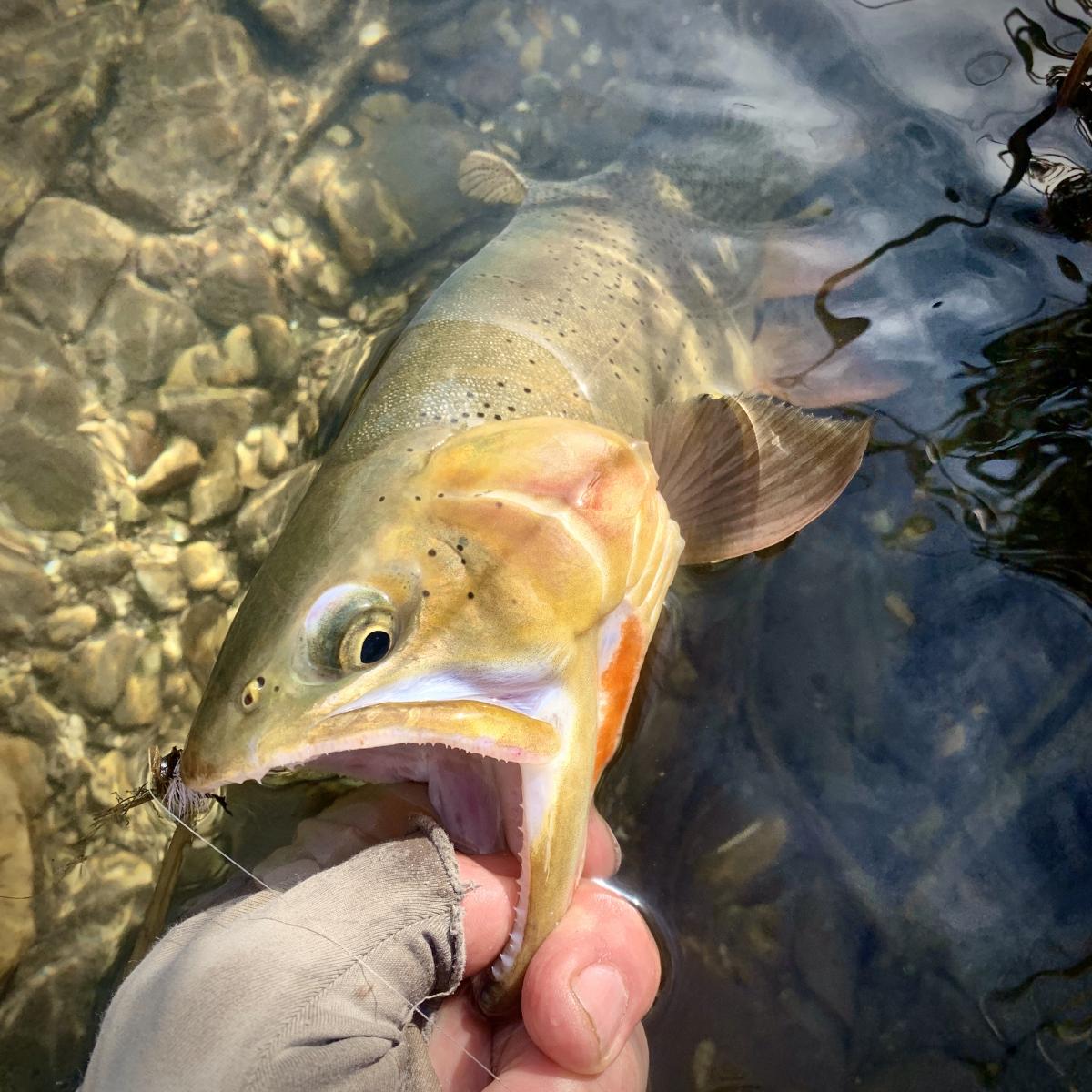 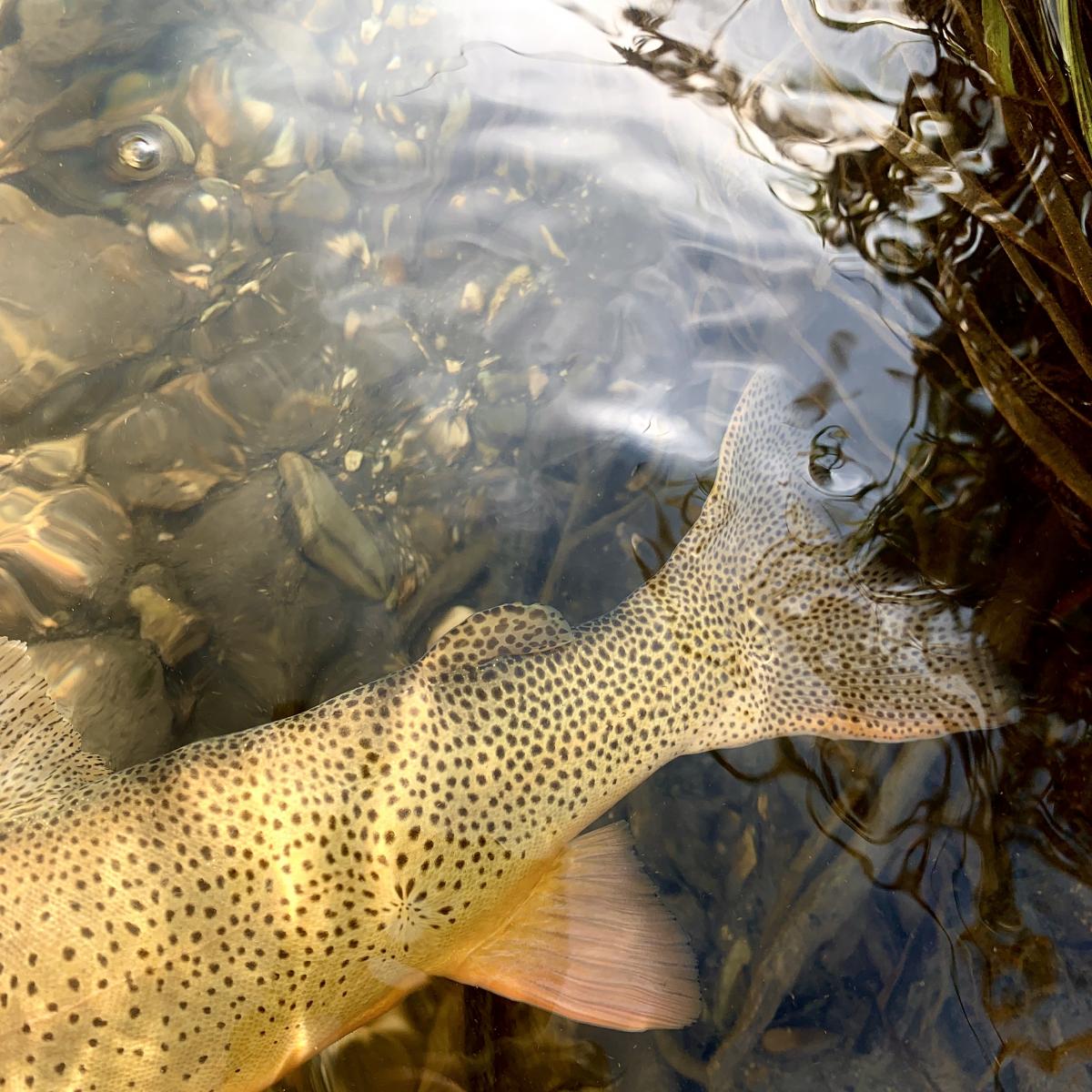 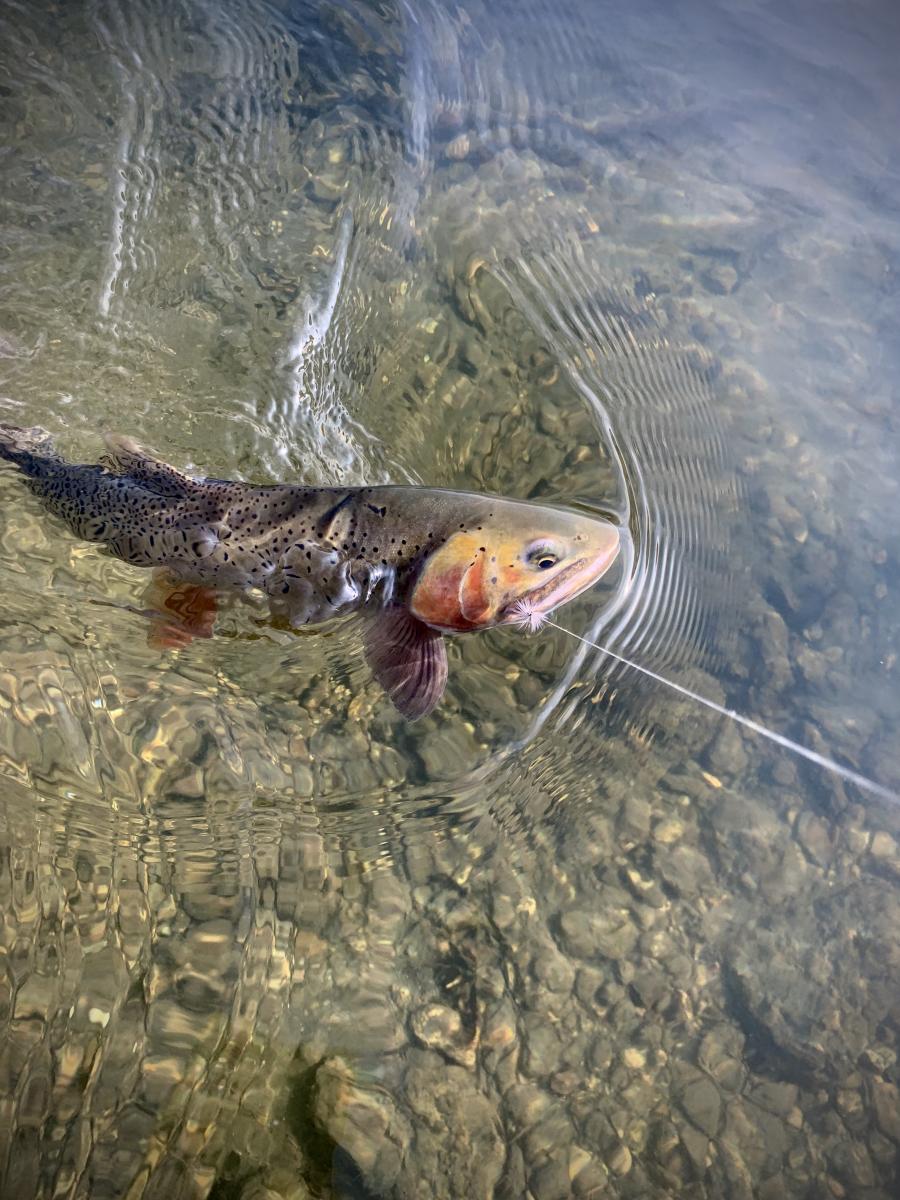 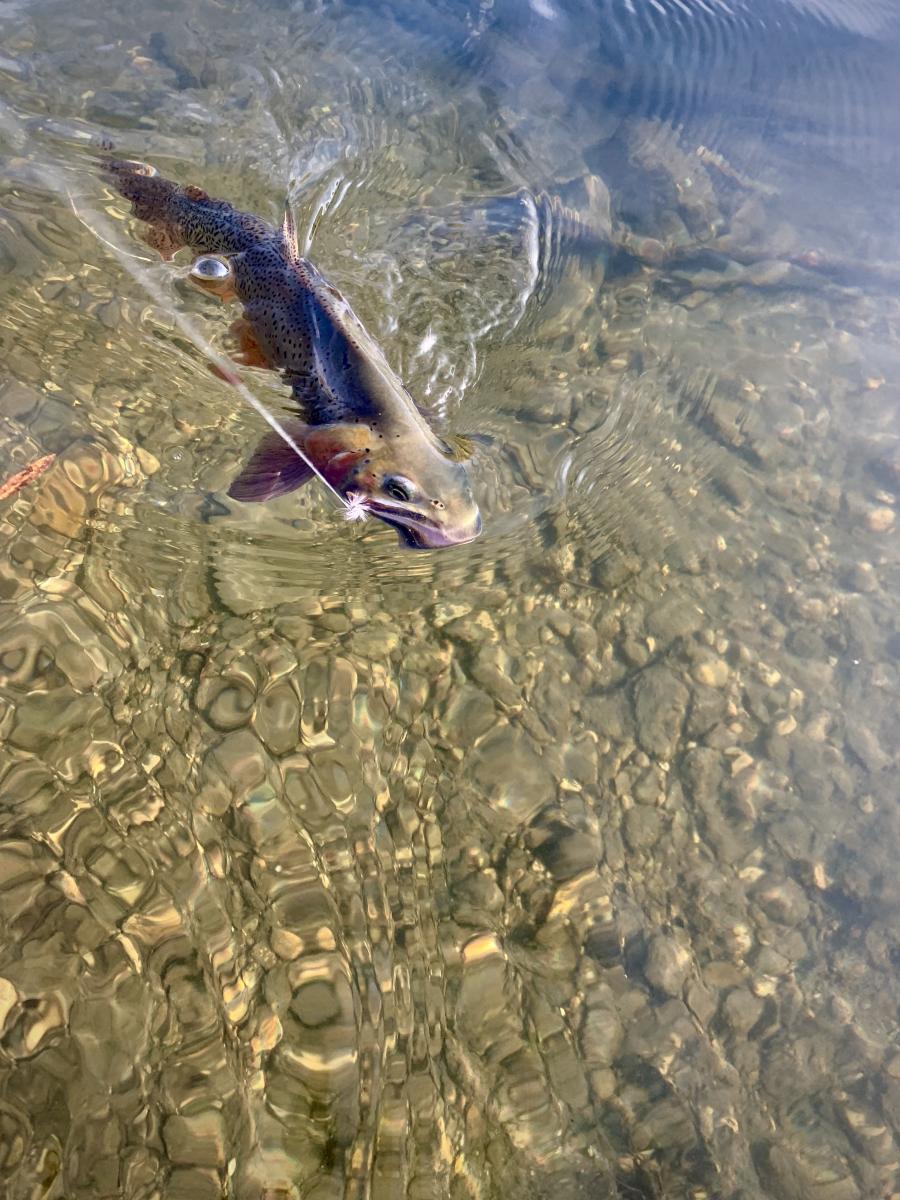 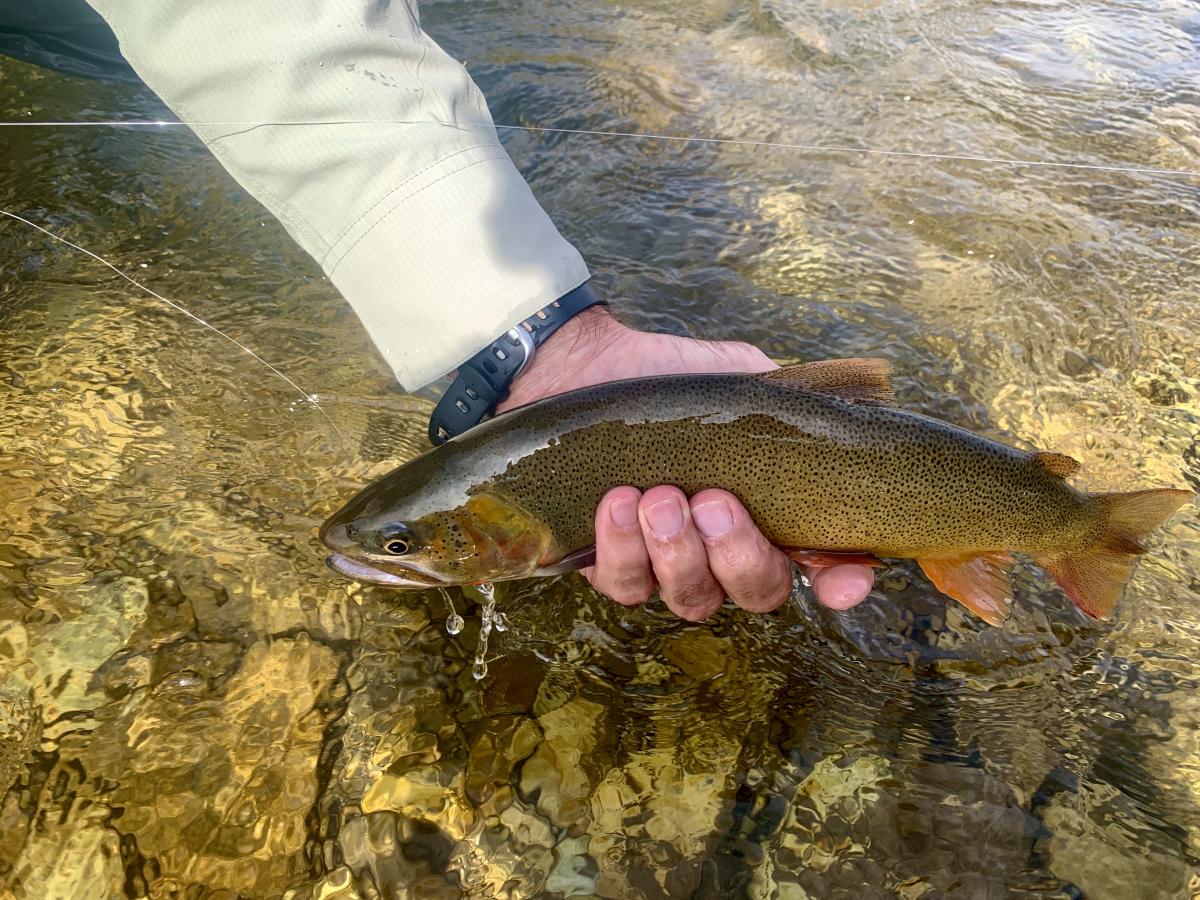 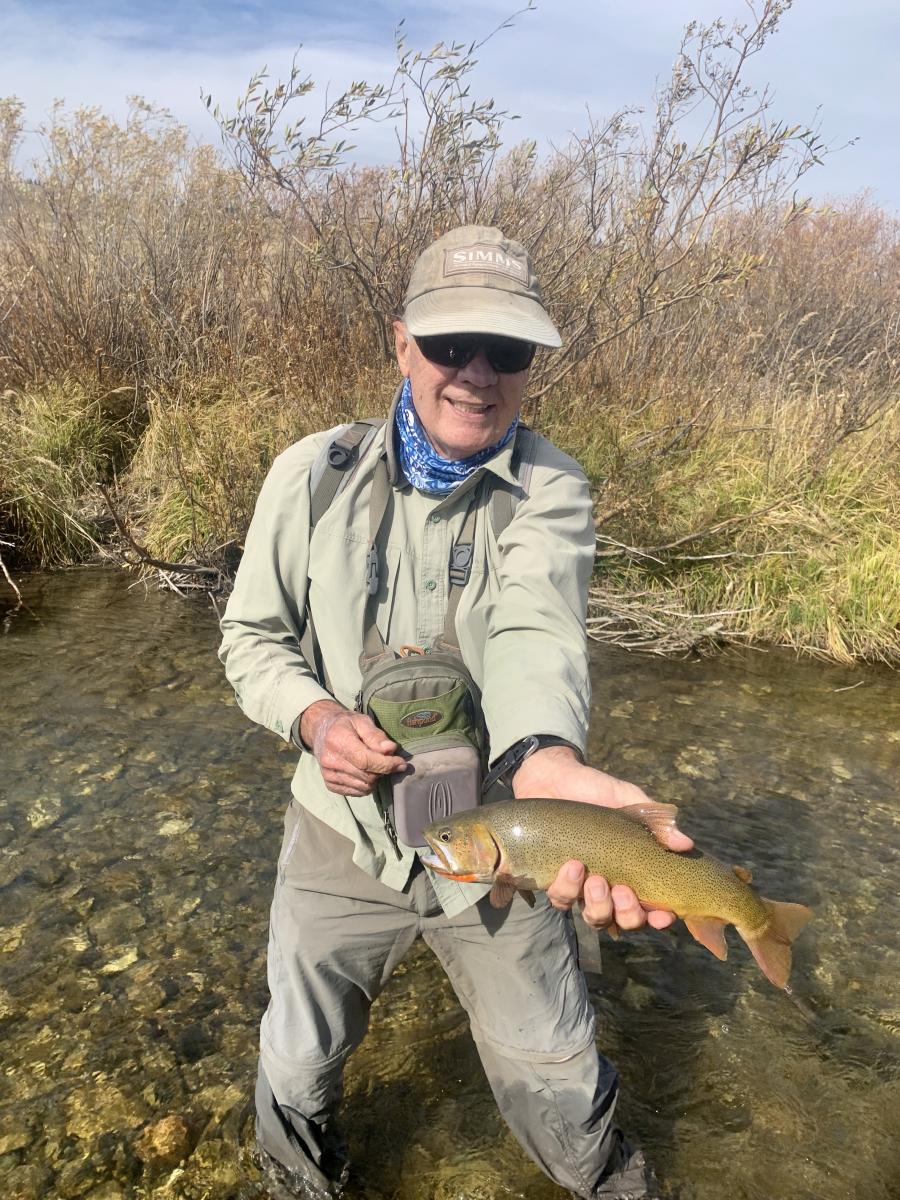 For our next two days, we ventured out into the prairie to fish an absolutely perfect small stream. This river holds a number of 18-22 inch rainbows and browns. We hoped to find a few, but also knew conditions would make it tough to fool the bigger fish. The water was low and clear.  It flowed like gin over the multicolored river rocks. The very differently colored rainbowns and browns both immediately disappered among these river rocks once released. A sight of which I never tire!

We caught fish on hoppers (the best!) and and, in the deeper runs, nymphs droppered off hoppers (not bad either). As the fall sun inched lower on the horizon, we hit one run that had a few fish rising to baetis in the tailout. I caught a few 16 inchers, but we saw a much larger fish sipping at the head of the run. Scott and I worked for over an hour on that fish. We pricked him once, but couldn't seal the deal. We had to come back tomorrow and see what we could do...

The next day we sealed the deal! Scott made a very good cast and picked up on the subtle take. He struck and fought the fish well keeping it out of some riverside debris created by an old beaver lodge. While not a monster, this 19 inch fish was satisfying to finally fool. We caught a few other hefty browns and rainbows then loaded up and headed "over the mountain". For the next four days, we would be fishing the Wind River/Bighorn. 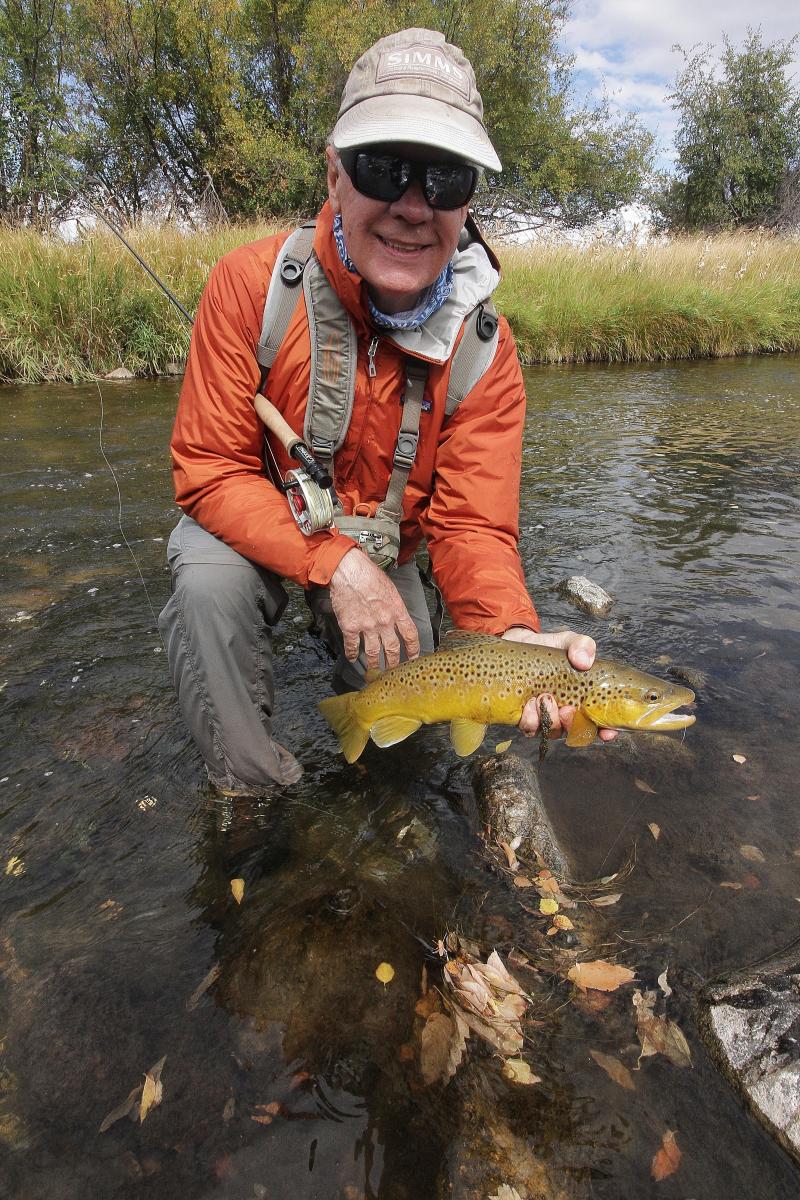 Scott with his savvy brown in hand! 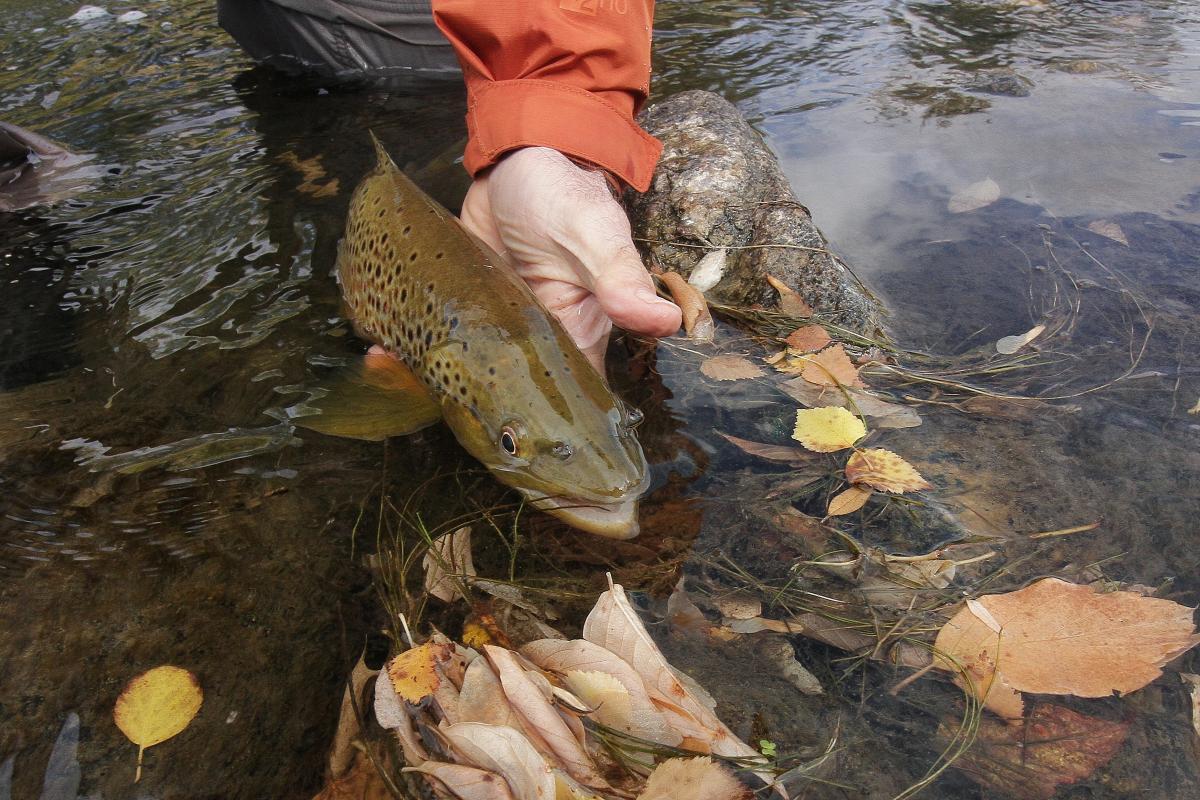 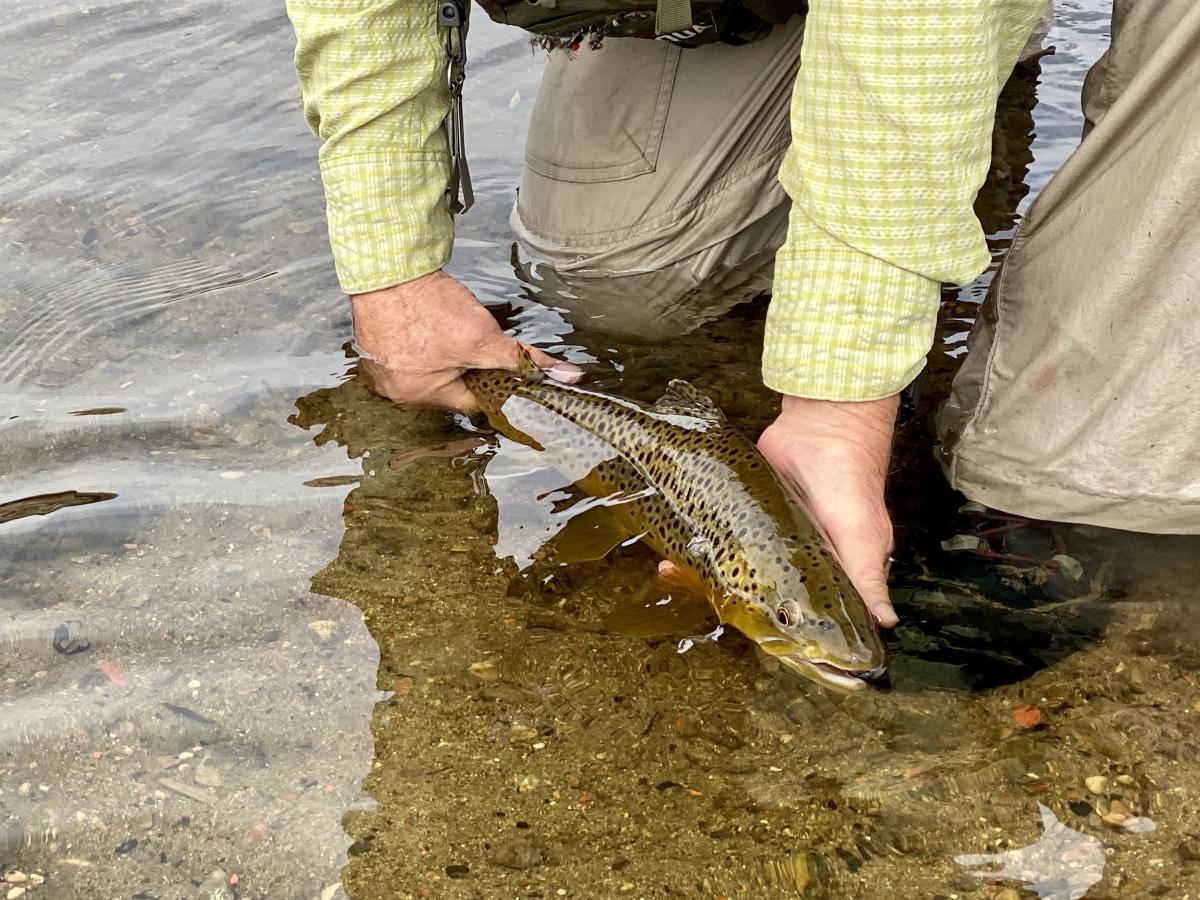 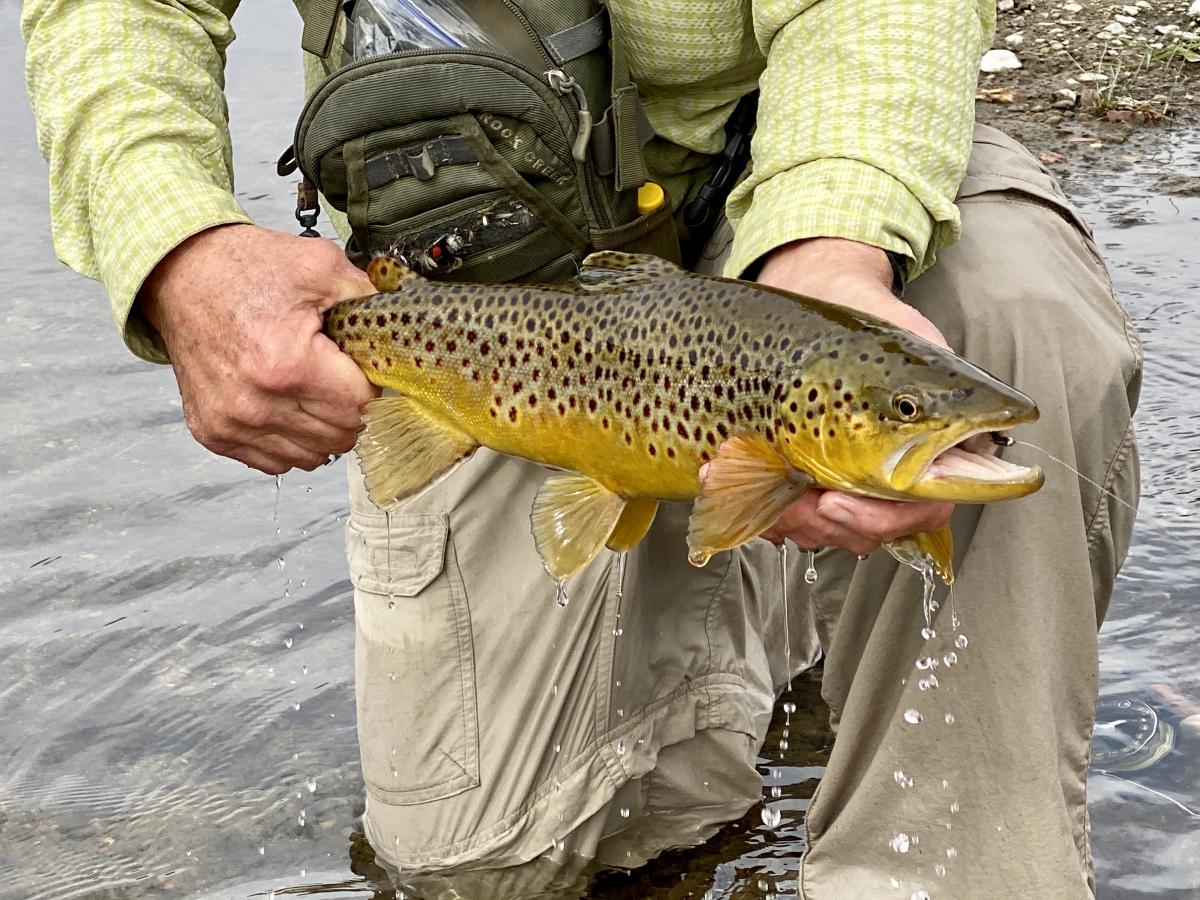 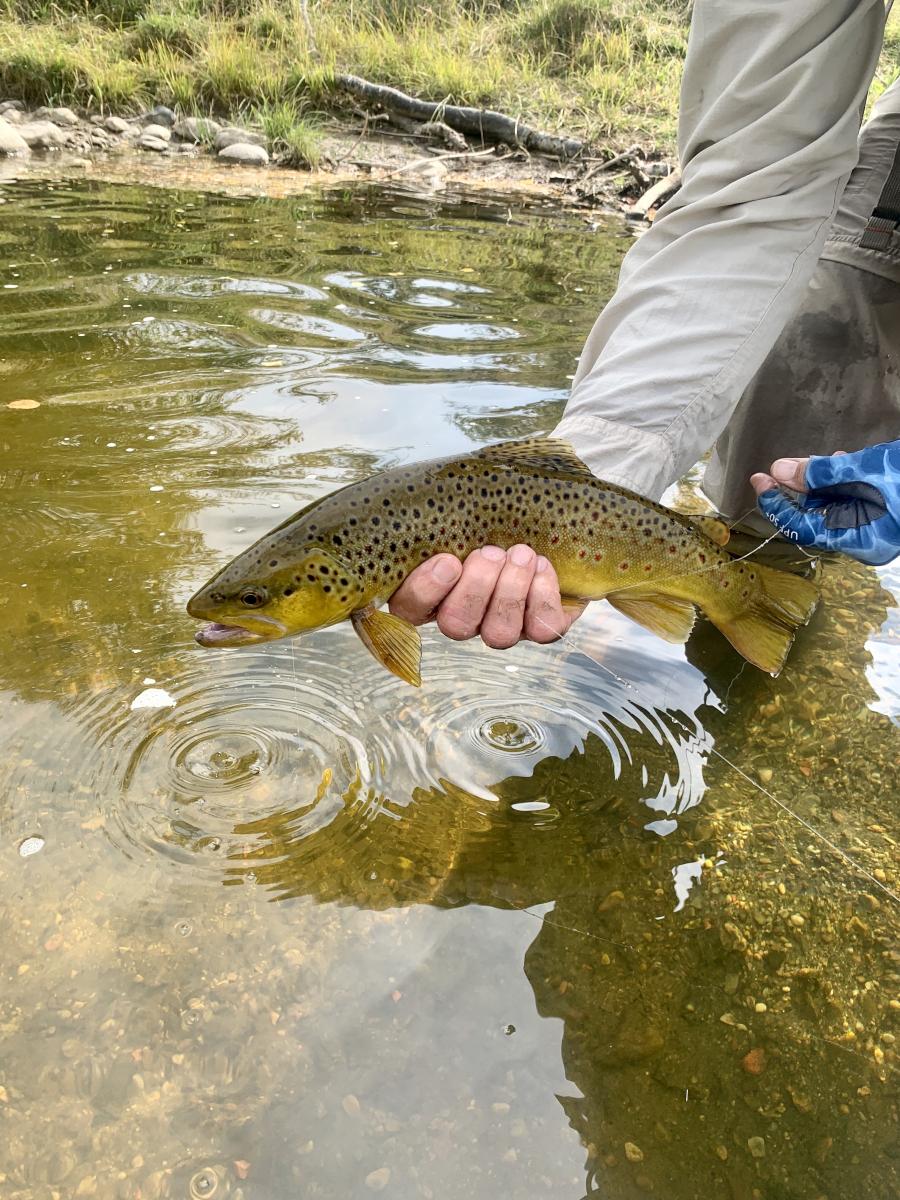 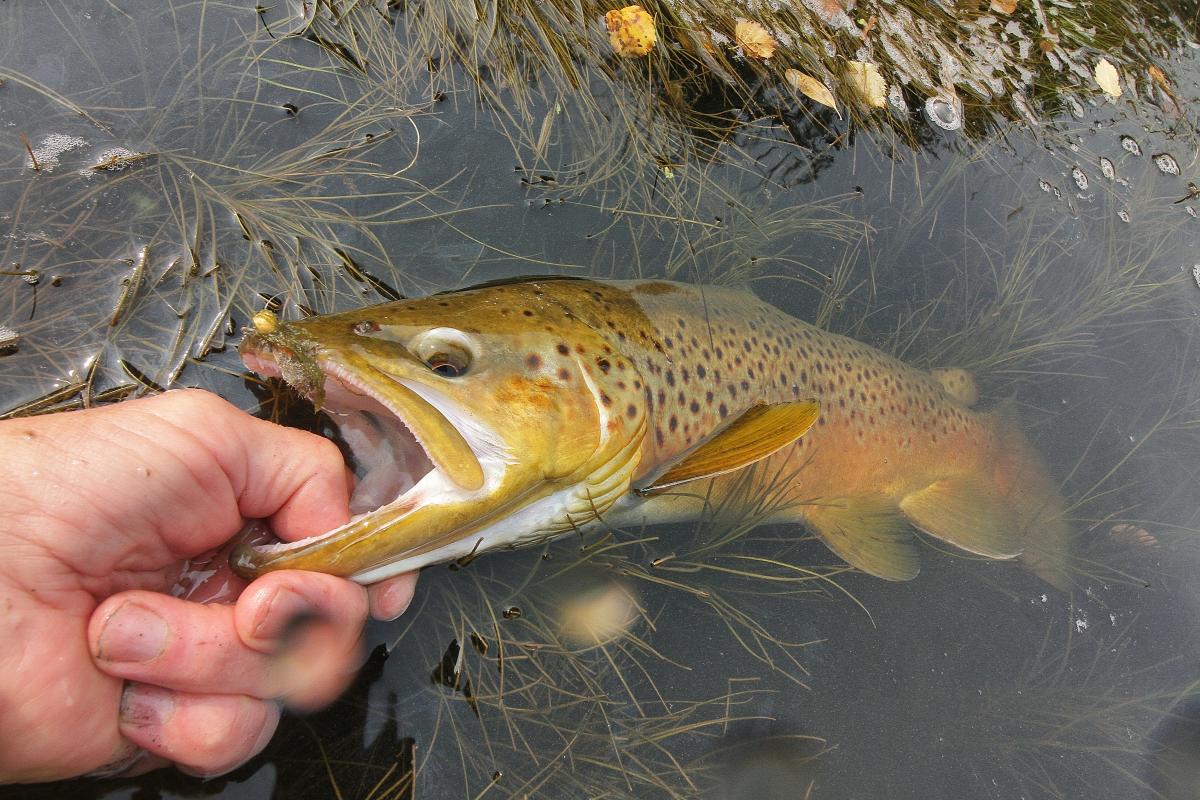 And a few of these! 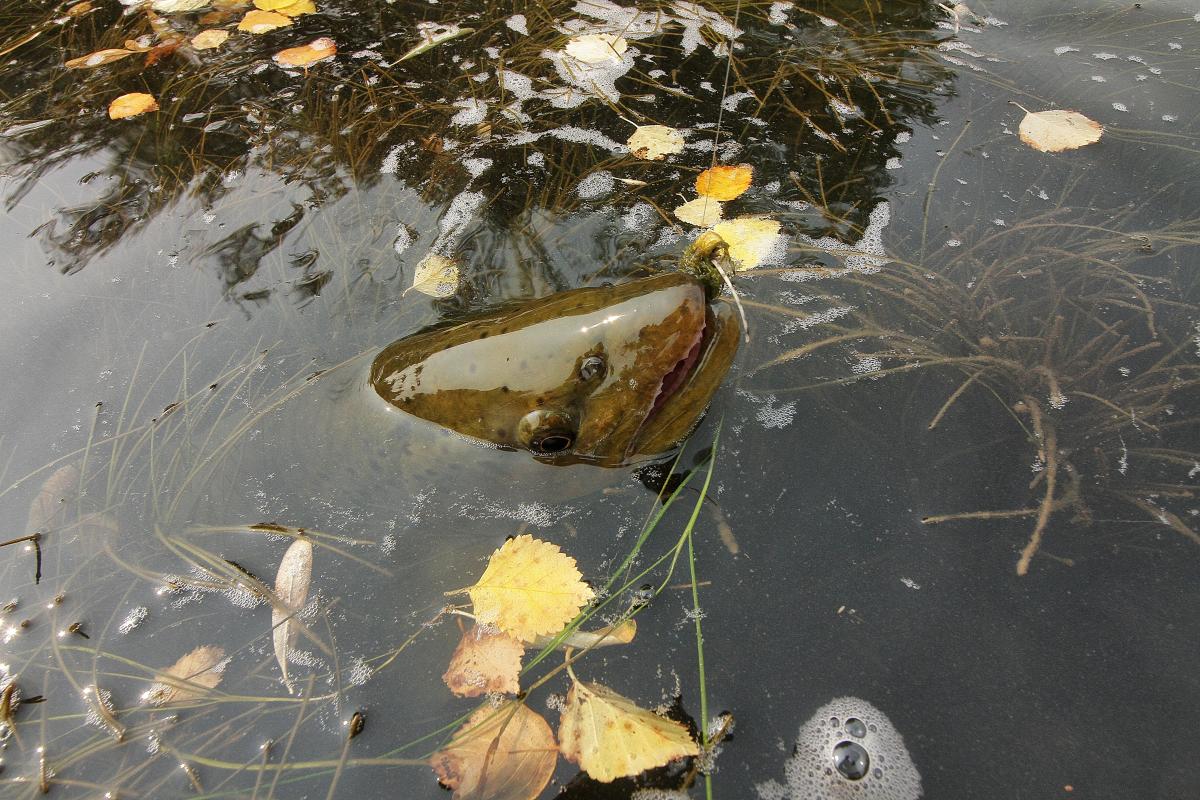 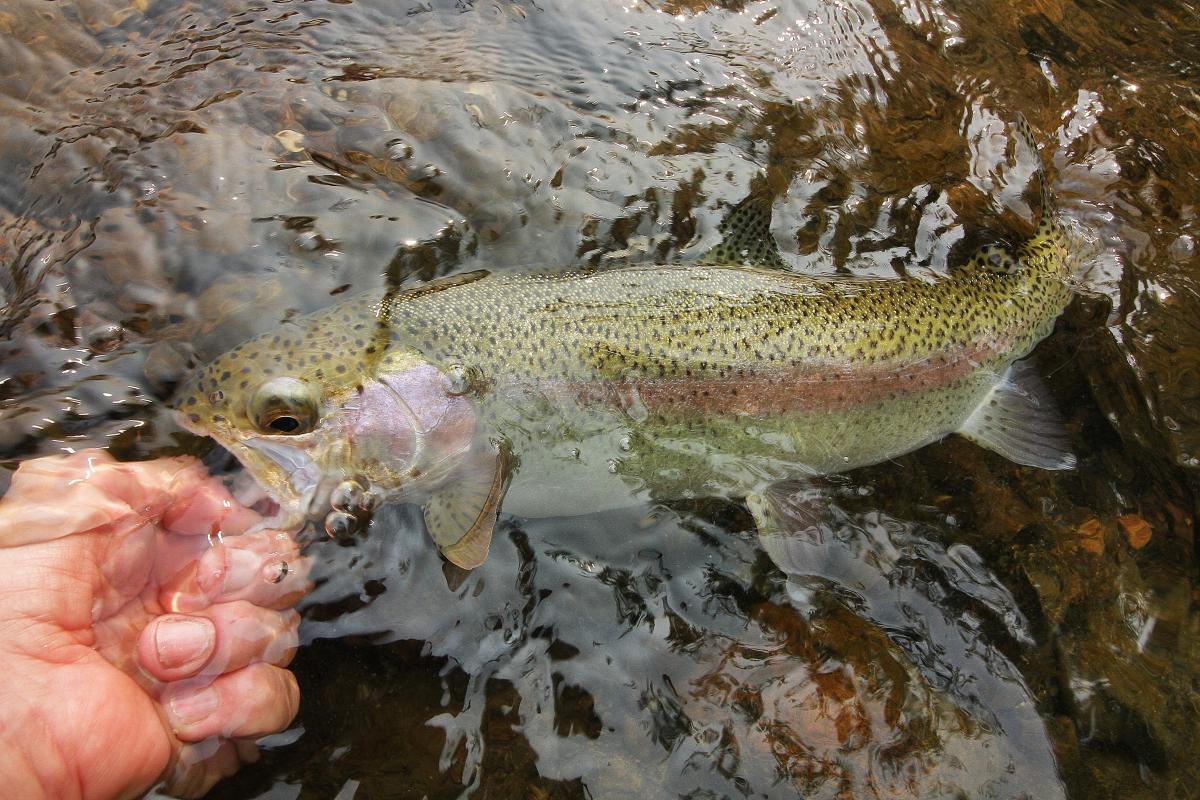 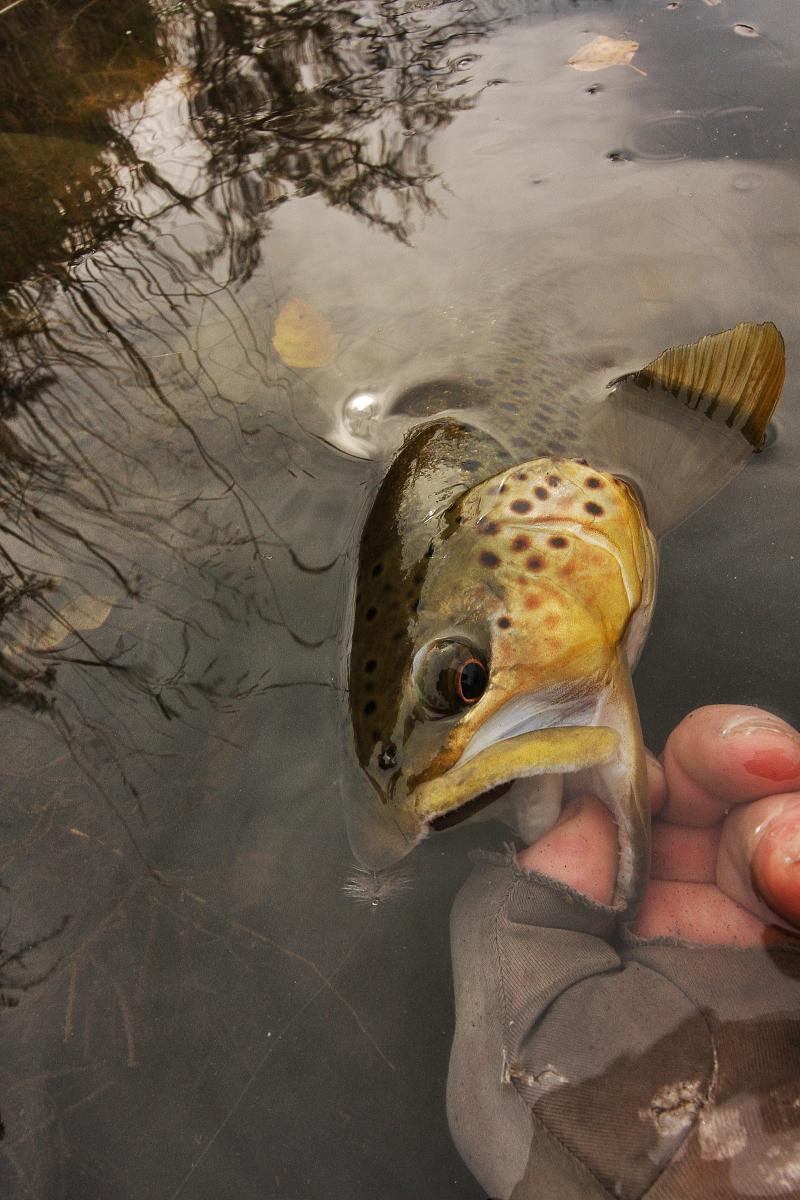 I'll stop here as this blog post is getting long. I'll make a separate post for our last four days. In this post, you'll see what I mean by each stop in our week offering chances at bigger and bigger fish.