OK, I knew I had ingested a heavy dose of optimism. While not an uncommon condition for diehard flyfishermen, it does tend to get one into a few interesting situations. Yesterday afternoon, when I decided to go fishing today, I knew full well it was the very end of NOVEMBER. But, and this is what fueled my optimism, there was no snow on the ground and it was unseasonably warm. With Thanksgiving firmly in the rear view mirror, I should have probably known better. Most sane Wyominites were now skiing, duck hunting or drinking. Nights had been very cold, often dipping well into the teens, so I don't know what I expected today: No ice? An open and clear river? Hoppers? Clearly, I was a demented soul looking to prolong Wyoming's freestone trout season. As I pulled up to the river, I got smacked with a strong dose of reality.

Beyond the cattle guard, my first view of the river showed a continuous sheet of ice. Except for one shallow riffle, there was no open water that I could see. Apprehensively, I steered my SUV a view hundred yards further down the asphalt road, then turned left to follow a faint set of two tracks that led over the irrigation ditch and to the river. Here I got a better view of the stream. I could see two runs that split an island. Each run began with a bouncy shallow riffle that dropped into a languid pool. In the pools, the water was frozen except for a small u-shaped opening where the riffled water slid into the pool with enough velocity to successfully fight back the ice... for now. As I rigged my rod, I could hear water tinkling against the ice. Still my optimism held. Through my small collection of addled brain cells, I calculated the trout would be clinging to these openings if for no other reasion than to get their last look at the sun before spring. I could relate. 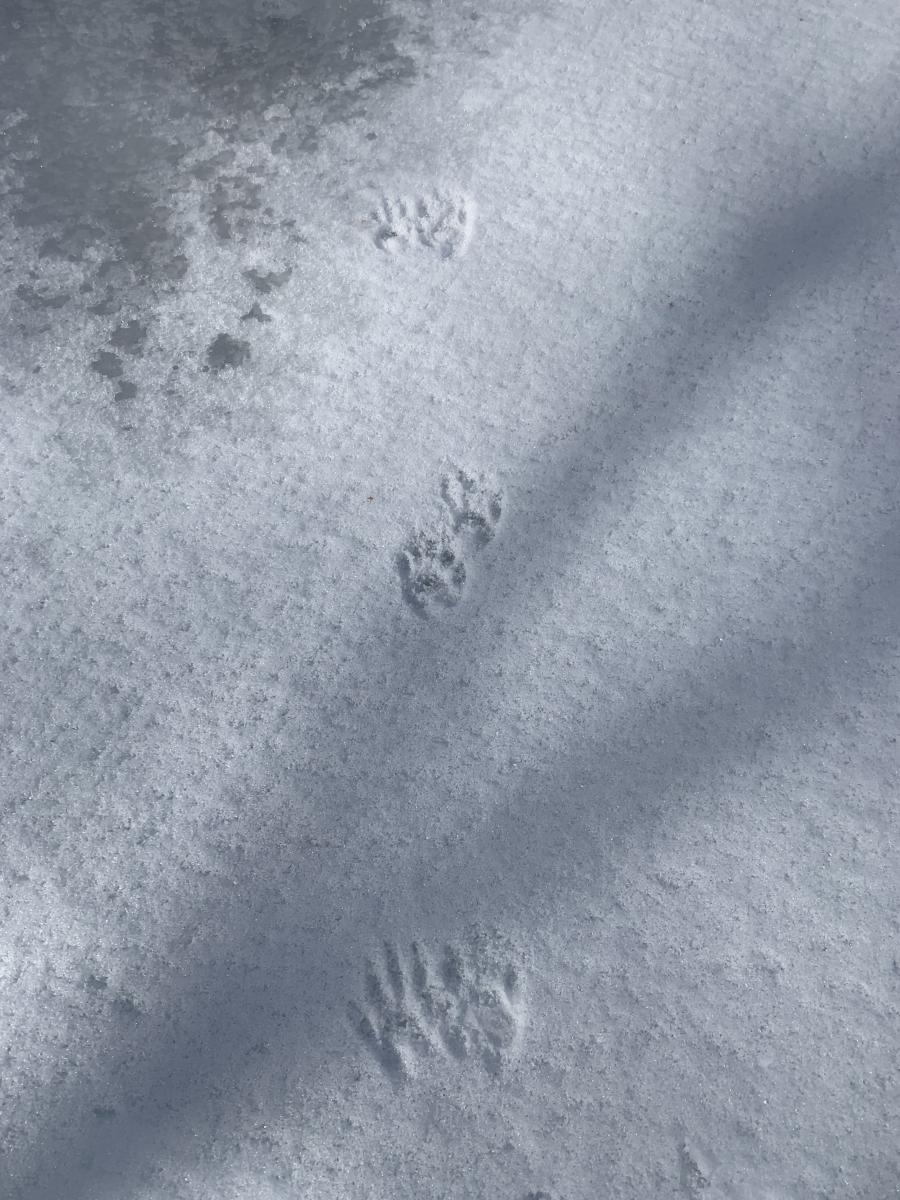 As I reached a sagging barbwire fence festooned with deer hair, I wondered if this would be a fruitless pursuit. Was I doing nothing more than taking a stroll on a beautiful day? I pushed the thought out of my mind. Normally, I would step into the river to get around this barbwire fence. I found it easier and less damaging to waders to do so. But today, I stepped onto the river. Greeting me were raccoon, deer and mink tracks in the snow. I gingerly slid forward not really walking so much as skating using tiny, mincing steps. I had to be careful so as not to slip. A fall here could be bad. I was alone. Carefully, I shuffled 25 yards to a stretch of open water below a very shallow riffle. I snatched my leader from the cold air and tied on a red Copper John. No Luck! Then a wire worm... Nope! I tried a streamer... again, Nada! I figured it was too early and as the sun got higher, it would get better... there was that optimism popping up again. 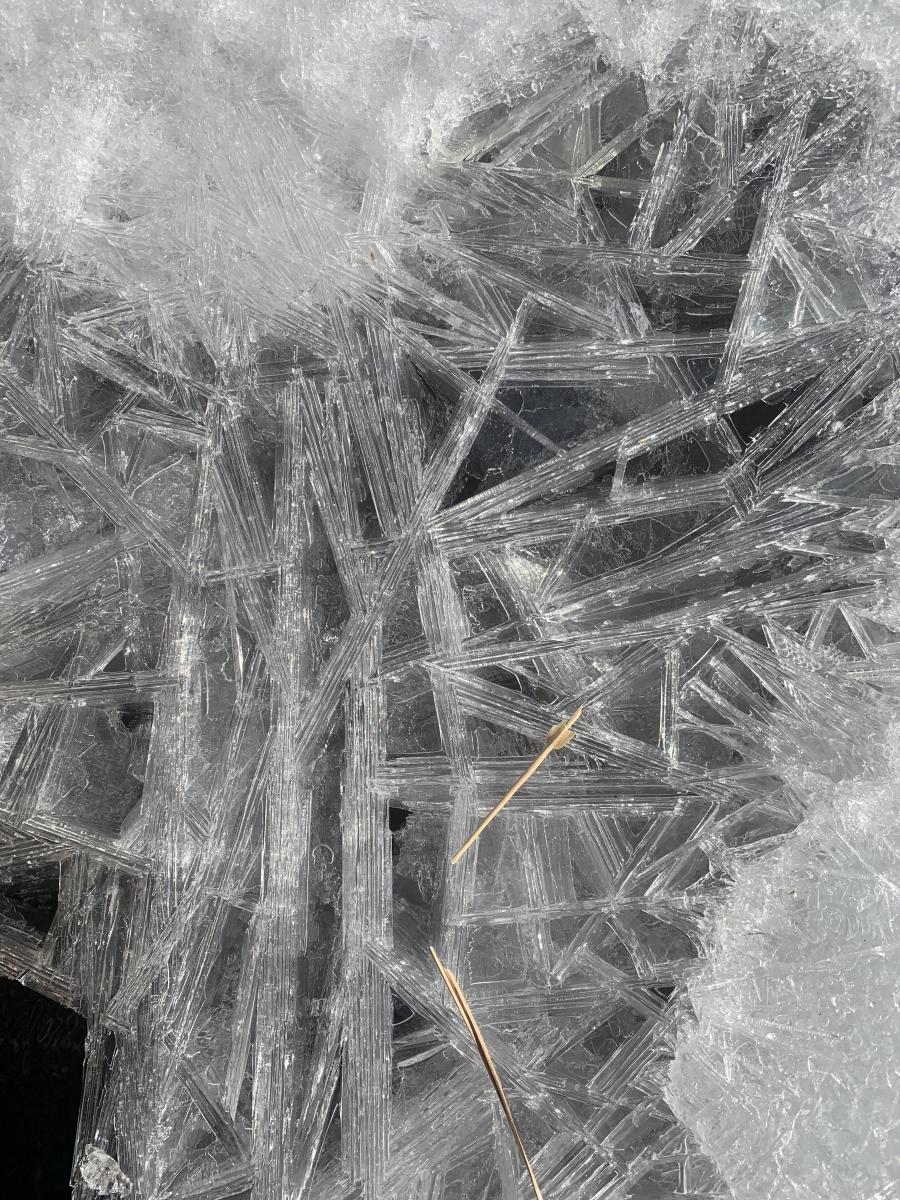 I eventually abandoned this run. Shuffling to shore, then climbing up carefully, I tried to step on exposed rocks to avoid the crunchy, fragile ice that lined the river's edge. Once on solid ground, I cut through the brush and quickly reached the next run. It was warming up. It was predicted to be 50 today, but now, it was probably in the upper 30's. I changed rigs putting on a small purple something below my #14 red Copper John. I wanted bright flies. I was hoping someone below would take notice of these garish offerings. I cast up into the riffle hoping the two flies would be down by the time they hit the 15-20 feet of open water in the pool below. After drifting for 10 feet, my New Zealand strike indicator stopped. I thought I was probably caught on the bottom (my optimism was wavering). I raised my rod tip and it stopped with a thunk. There was no pull, no head shaking, no evidence of a fish on the other end. 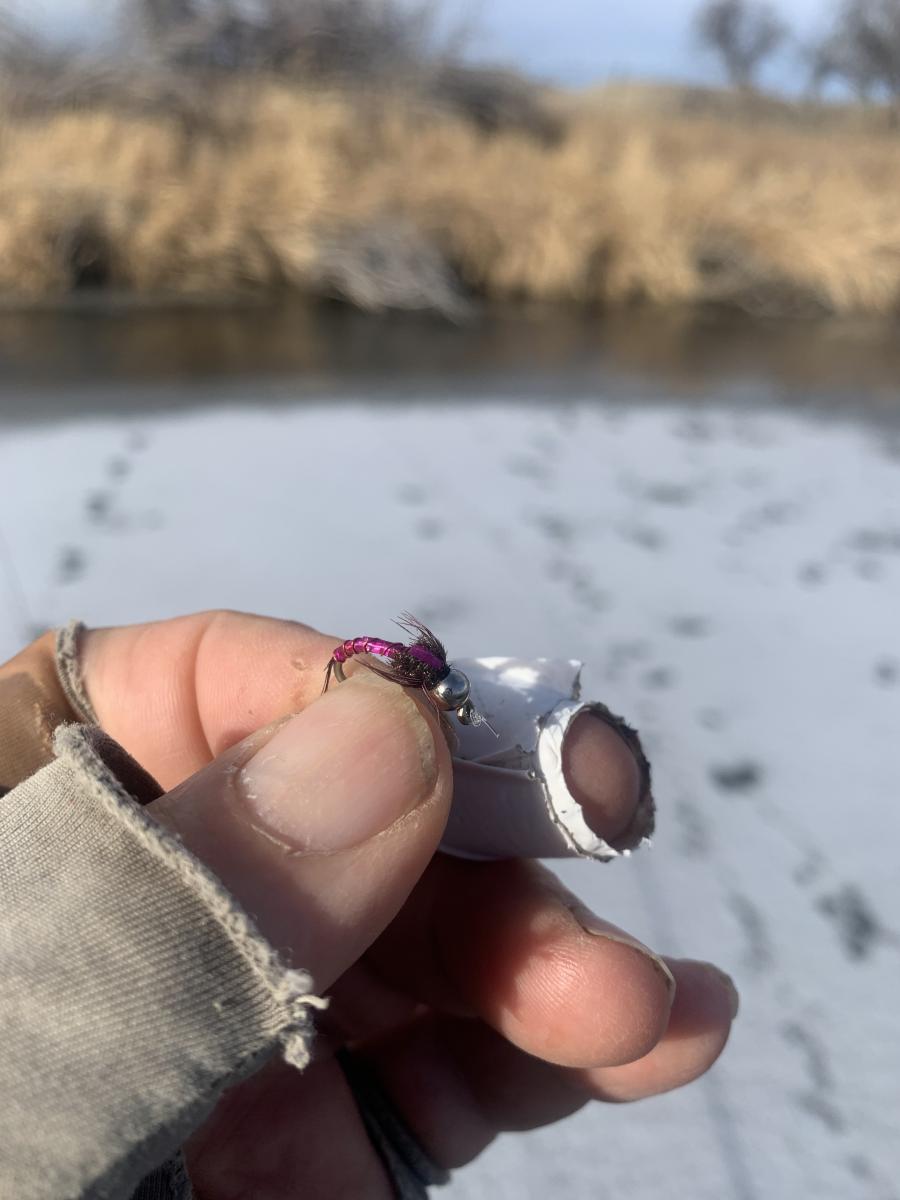 "Damn!" I muttered. I knew I wasn't going to wade out to get this fly. A slip here and I would soon be under the ice. That would be a fatal mistake. I thought a better option was to lose this fly. See, I'm not a complete idiot.

Just as I was about to let the pressure off the rod, I felt a weak shimmy come down the line into my rod. I quickly pumped my rod tip up. As I felt the tension once again, a big dark torpedo shot four feet in the air. His trajectile landed him with a thud on the ice. He had just missed falling back into the water by a couple inches, but it was enough to leave him high and dry. As he frantically flopped about, I worried for his safety. I say him because he was obviously a male. He was very dark and beautiful with a strong kype jaw. I dared not go onto the ice to save him so I gently pulled on my line sliding him back toward the water. If the hook pulled or the tippet broke, he would be marooned high and dry with no chance for survival. 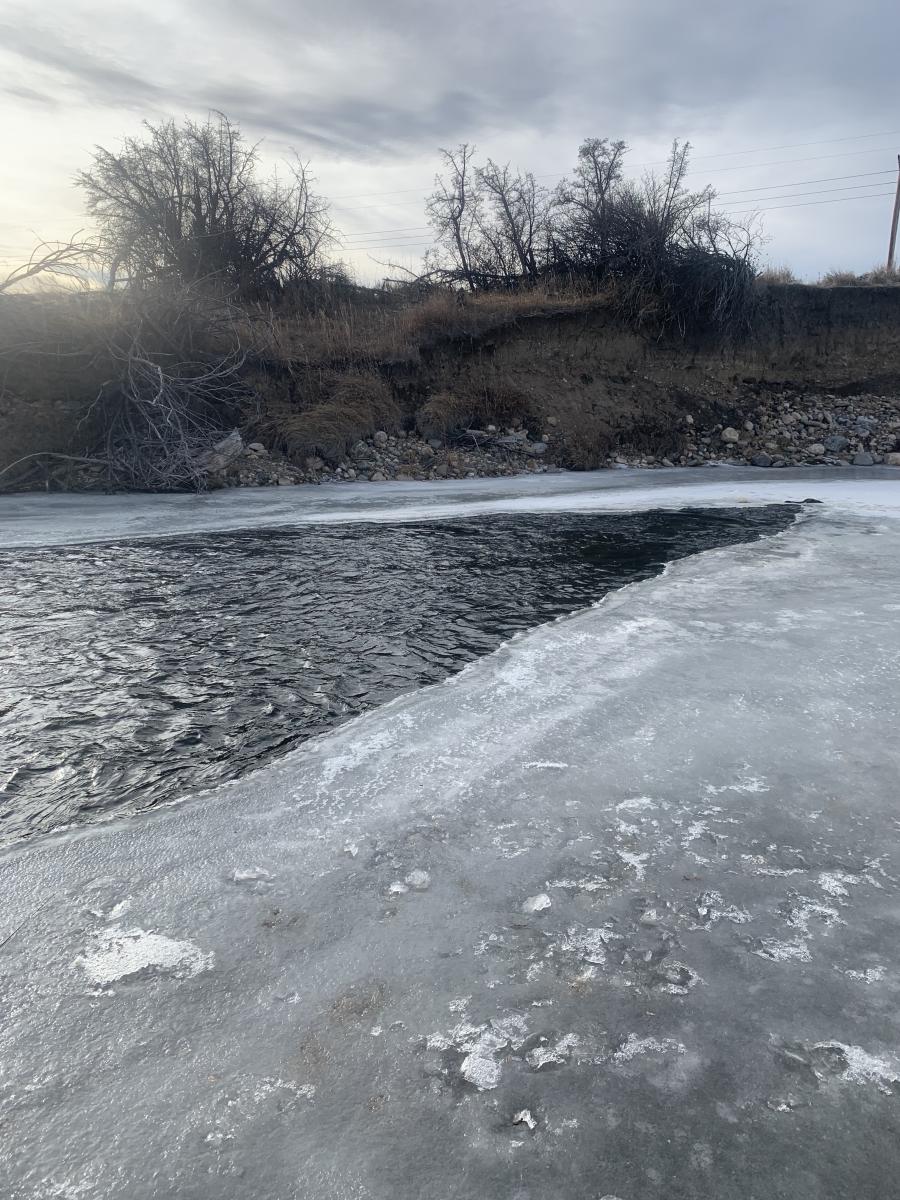 Inch by inch, he slid towards the water. Finally, I made a final delicate last pull. The big brown tumbled back into the dark river water. He shot down into the depths pulling my line tight against the ice edge. My leader then broke between the first and second fly. The purple something was gone along with the big buck brown. A fair trade I thought.

I stood on the ice dumbfounded. I mouthed a silent "Whoa". This was a first for me. I've had fish beach themselves or jump landing on shore. Once, I had a large tarpon string himself from a mangrove tree after a spectacular leap. I even had one rainbow knock himself out on the Bighorn River when he lept cracking his head on a log. But I have never had a fish jump onto ice. But then again, I've never fished this late on a 90% frozen freestone stream!

I backed away gingerly from my perch near the hole. Earlier, I had skated as close to the opening as I dared. This was to get a good drift. Now, as I turned to leave, the ice was creaking and groaning telling me to move on and be careful. As I reached solid ground, I knew making the effort to get to the river today had been absolutely worthwhile.

Over the next five hours, I landed four fish. The smallest was 18 inches, the biggest 20. All were browns, all were beautiful. All these fish came from the few feet of open water where the riffles dropped into deeper pools. I caught two fish on streamers and two on nymphs. Often, I let the flies slide under the ice until my line hit the ice edge. The nymph takes were very subtle, the streamer takes anything but. I walked on ice most of the day with no falls, but I came close a couple times when my attention wavered usually while fighting a fish. I fell thru the ice a few times, but in spots where I knew it was very shallow.

By 3:00 PM, the light was getting low and the 50's were quickly giving way to the 40's. The 30's would be next so I left the ice and began to walk back to my car. I hustled through old bleached grasses and over deadfall. I carefully circled the Russian olives and navigated my way through the many tunnels deer had cut through the buffaloberry bushes and honeysuckle vines. As I threw my gear in my car, I knew this would be my last day here this season. I was OK with that... what a way to end a year!