Back on Little Abaco 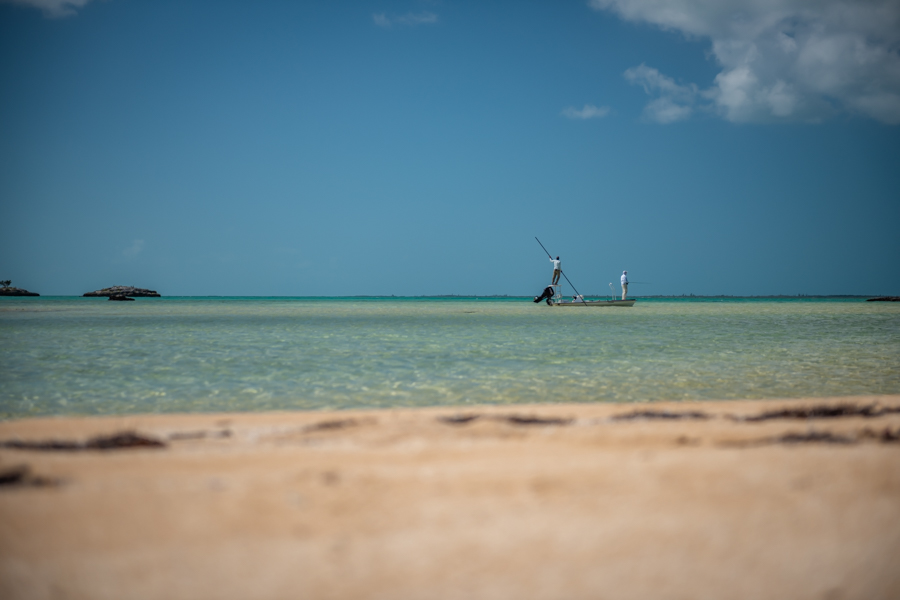 July 7th 2019 marked the end of the season for Sidney and Ketta Thomas at Little Abaco Bonefish Lodge located on the northern tip of Abaco Island in the small town of Crown Haven. The summer was like any other as they made ends meet with lobster fishing and prepping for the upcoming fall bonefishing season. Then on September 1st, 2019, Hurricane Dorian settled on top of Abaco and Grand Bahama Islands slowly tearing them apart in the strongest hurricane to ever make landfall in the Bahamas. The devastation and loss of life is hard to comprehend. As he nestled in his home and lodge on a small rise, Sidney stood steadfast as water sloshed 2-3 feet up the walls and 220mph wind gusts tore at the roof for close to 48 hours.

Through possibly some stroke of luck and some serious resilience, Sidney and his lodge emerged from the storm still standing. Over the following months much needed services and supplies were in order but little actually made it to the small town of Crown Haven. With continued resilience and the help of some good friends and clients, we would like to say, THANK YOU, as the rebuild slowly started to happen in hopes of being ready for anglers to return in the spring of 2020. 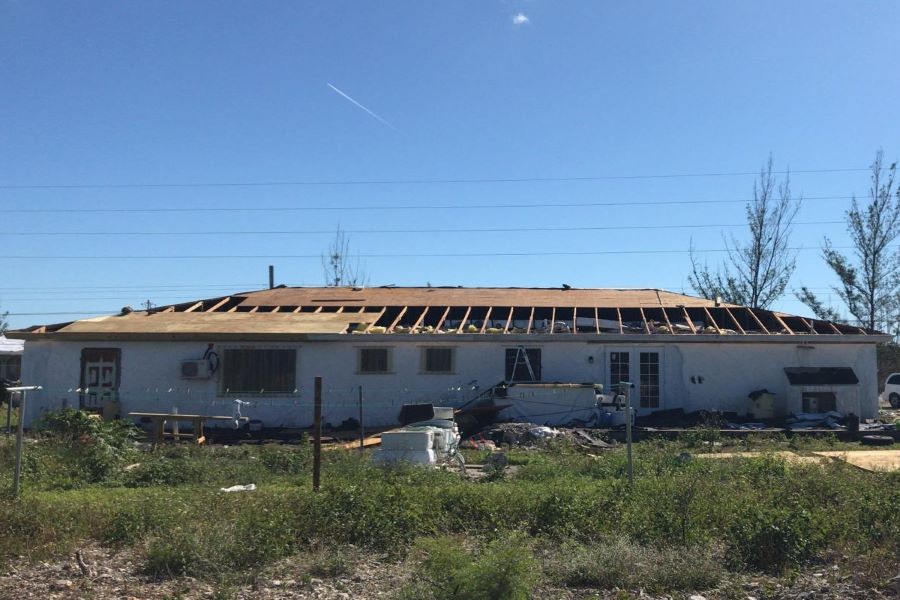 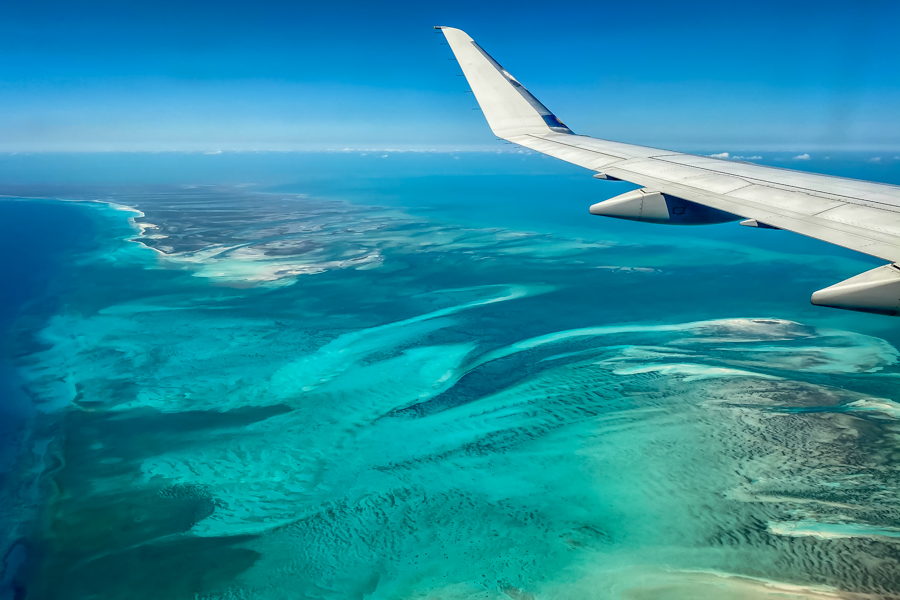 March 12th 2021 our plane touched down in Marsh Harbour for a week of fishing at Little Abaco Bonefish Lodge. To say that emotions were running high would be an understatement. The previous week was filled with anxiety and stress as work piled up and we readied our covid testing and visa requirements for Bahamas entry (which are tight on the timeline but altogether worked out smoothly). Now anticipation and excitement fully grasped us as we stepped out into 78 degree air looking for the familiar faces of Sidney and Ketta picking us up from the Marsh Harbour airport. After a joyful introduction, we piled in for the roughly 1hr and 20min drive north to the lodge. As we slowly drove through parts of Marsh Harbour making a few stops for various things, it was quickly evident that there was, and still is a long way to go for the residents of Abaco Island. Most buildings were in disarray or completely gone with only the foundation left to show that a business or home once stood. Those that had started to rebuild were still very much in the process. Discussing with Sidney and Ketta, as well as a few locals at a small store, the story was the same (we would also hear this from locals in Crown Haven), the majority of true aid either never made it due to corruption in Nassau, or ended up in the areas where wealthy outsiders had second homes. The common theme seemed to be “it’s not if you needed help, it’s who you knew to get help”. The same folks all echoed a similar sentiment that they needed tourism to return in order to get things rebuilt.

Once out of town we could see the effects on the pine forests that uniquely inhabit Abaco. Virtually every tree was snapped off 20-30 feet in the air so it looked like someone stuck hundreds of broken sticks in the ground. The undergrowth has grown back strong, along with some young pines already sprouting up 3-6 feet tall, showing the resilience of nature after such a storm. As we continued north the various debris of thrashed cars, boats, docks and under construction buildings were a constant reminder of the havoc the storm had wrecked. 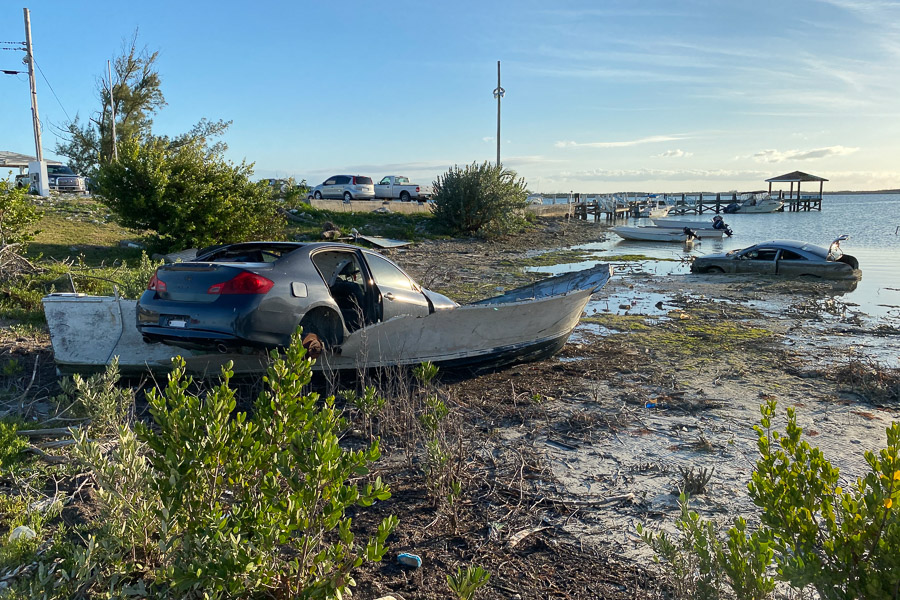 The bridge past Coopers Town where the road turns west was washed out and is currently just a land/gravel bridge with no culverts for water flow. But they have started rebuilding the bridge and it appears it will be a larger scale concrete and steel bridge that will allow for not only water flow, but high enough for a skiff to pass through which will open up some opportunities for Sidney and crew to fish both sides of the area! Great news!

As we arrived at the lodge, the clean new roof looked tip top. The remainder of the exterior still needs some new stucco in places, as well as new windows (which have arrived and are awaiting installment!) as some have swelled and do not open/close with any ease. Some general cleanup from various debris and projects underway is also needed. These projects include Sidney working towards his future plans for the back of the lodge. He plans to build a large deck with an outdoor kitchen and a “lounge” palpa of sorts. He also plans to blaze a trail through the brush down to the oceanside waterfront, which is only a few hundred yards away. They have come a long way, but still have plenty to get done. However currently, it’s fishing season so things will get underway this summer and hopefully by next spring everyone will see the fruits of his labor. 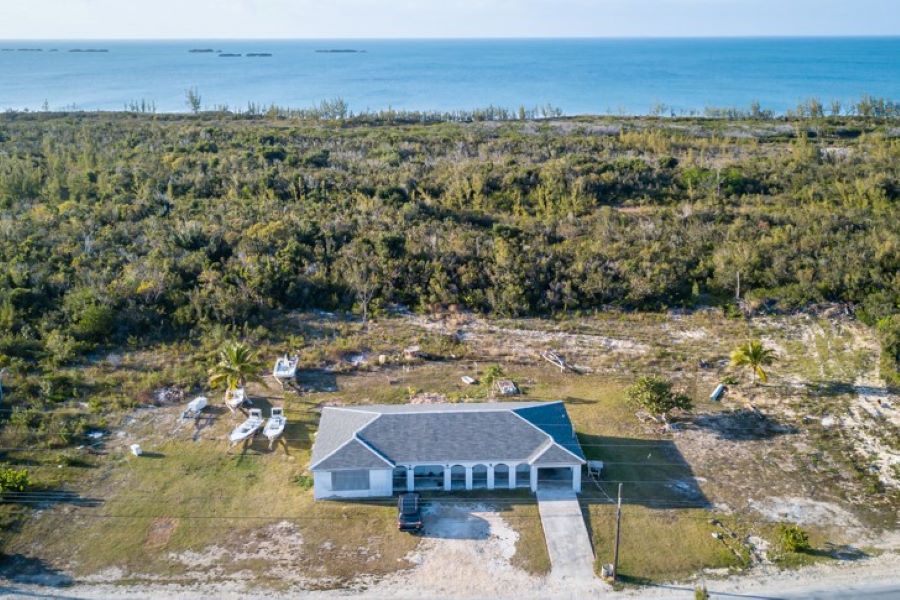 The interior is clean and inviting, having been completely redone with new sheetrock, wiring, paint and tile. The couches, tables/chairs etc. are all new, and they have tiled the bathrooms with new walk-in showers. Currently one bedroom has a private bath, while two of the double occupancy bedrooms have a shared bathroom, but plans are laid to add an additional bathroom so all three rooms have private bathrooms. If the temperature is not to your liking outside, all rooms, as well as the main area have AC to keep you cool and comfortable. If desired, there is a tv for you to catch up on your favorite sports team or enjoy a movie in the evening. 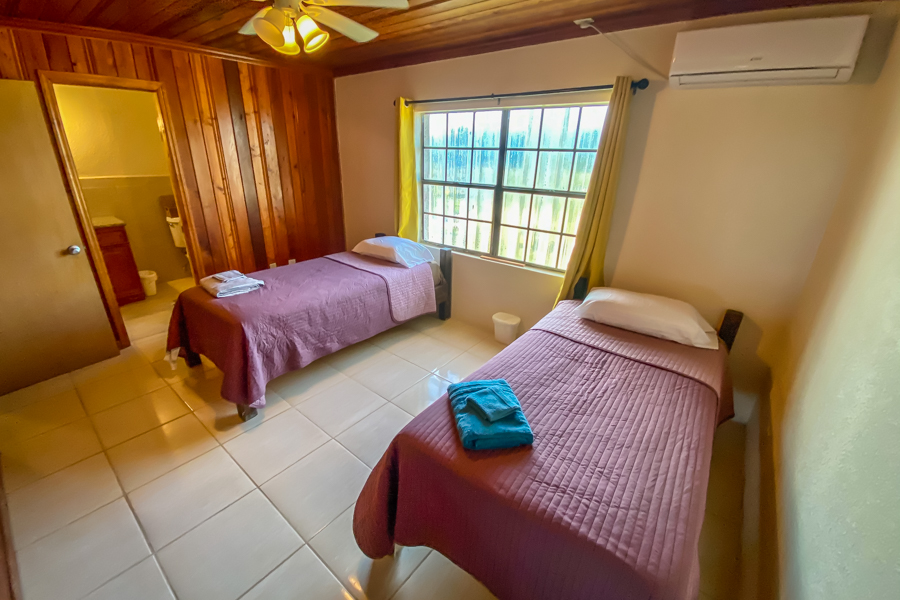 While things may still appear rough, all the amenities you will need will be taken care of by Ketta’s Bahamain hospitality. You will be well fed with breakfasts consisting of eggs and bacon or bagels and cereal, with coffee and juice ready early for you to enjoy while the sun comes up. Lunches are a variety of sandwiches and chips with some snacks and granola bars. Plenty of water and gatorade are available to stay hydrated throughout the day. Dinners are home cooked, ranging from fresh fish or lobster to chicken and pork served with a variety of sides and veggies. If you're lucky, Ketta will pick up some fresh baked pies down the street. These treats are a pleasure for dessert or saved and enjoyed with coffee the next morning. With daily housekeeping, the lodge is always clean and ready for you to relax. For $4 per bottle, cold beers (Kalik or Sands) in the fridge based on an honor system... just pay in cash before you leave. For wine or liquor, remember to stop at the duty free shop in the airport before departing the US or you can ask to stop at the store in Marsh Harbour upon arrival. 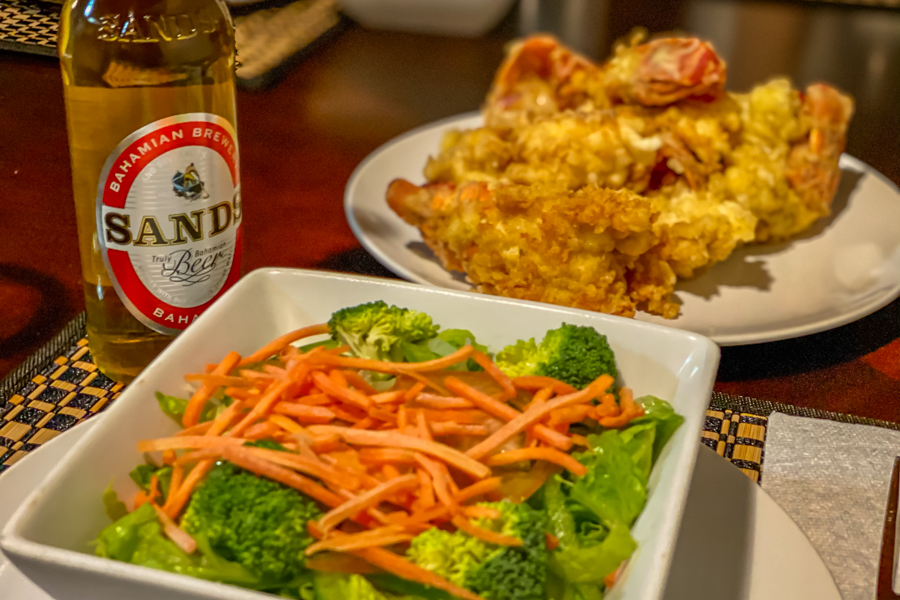 Now onto the more important aspect: fishing! All involved would agree, the fishing was damn good. We couldn’t have been more pleased with the guiding skills and company of Greg Rolle and his son Dominci each day. They were a joy to fish and joke with while keeping the day lighthearted and professional. We were not able to plan our trip around the best possible tide profile, but around the timeframe our schedules allowed. Which is always the correct answer when asked when is the best time to go; and again, Greg and Dominic did a great job chasing deflections and tides to put us on fish consistently throughout the week. 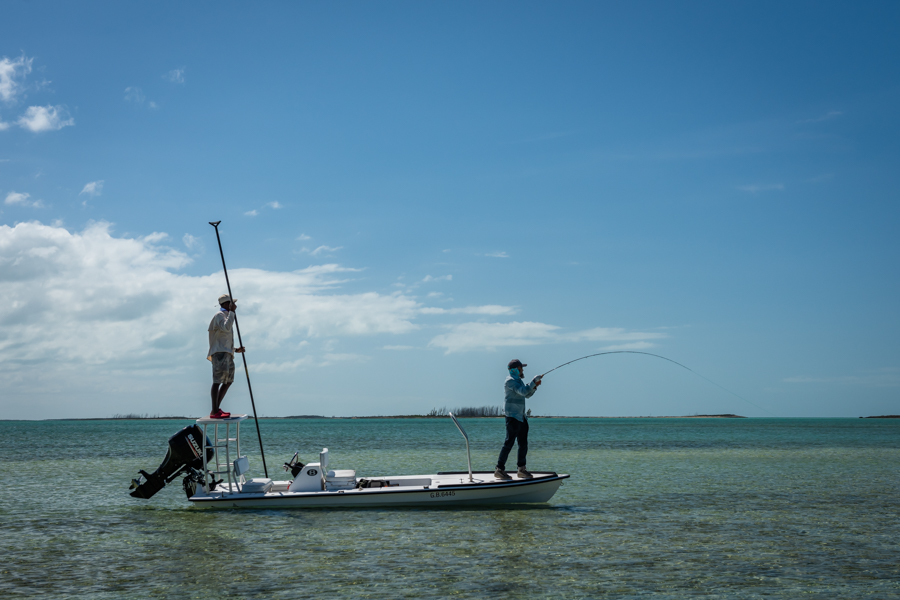 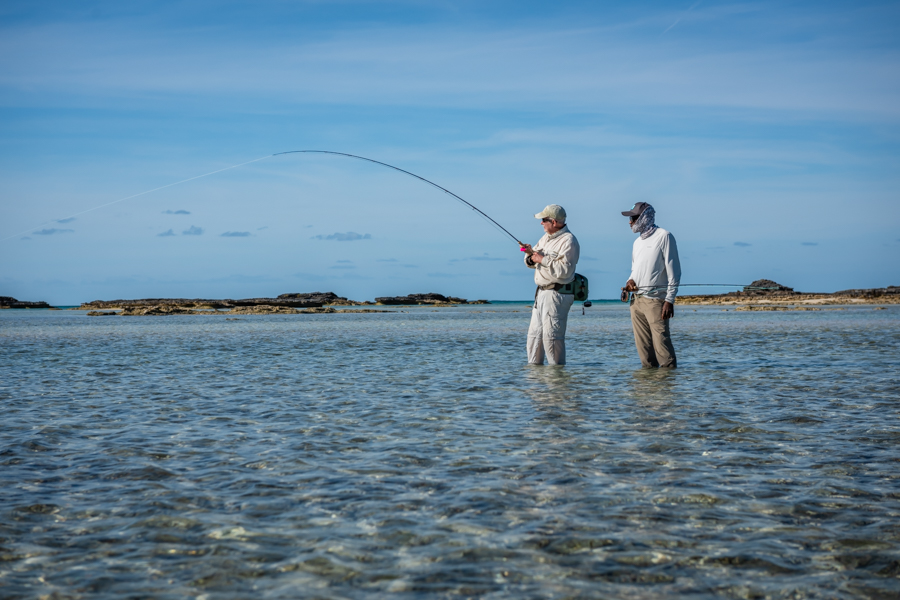 We had the pleasure of both boat fishing and wade fishing each day. Their default setting is to pole the boat so don’t hesitate to ask to wade fish given your preference. The guides will make it happen depending on the wadeability of the flat. Anglers will fish over a variety of flats ranging from hard packed sand, grass, rocky/coral, and mud. Most wade fishing will be ankle to knee deep, while boat fishing will gain you the opportunity to fish deeper water. 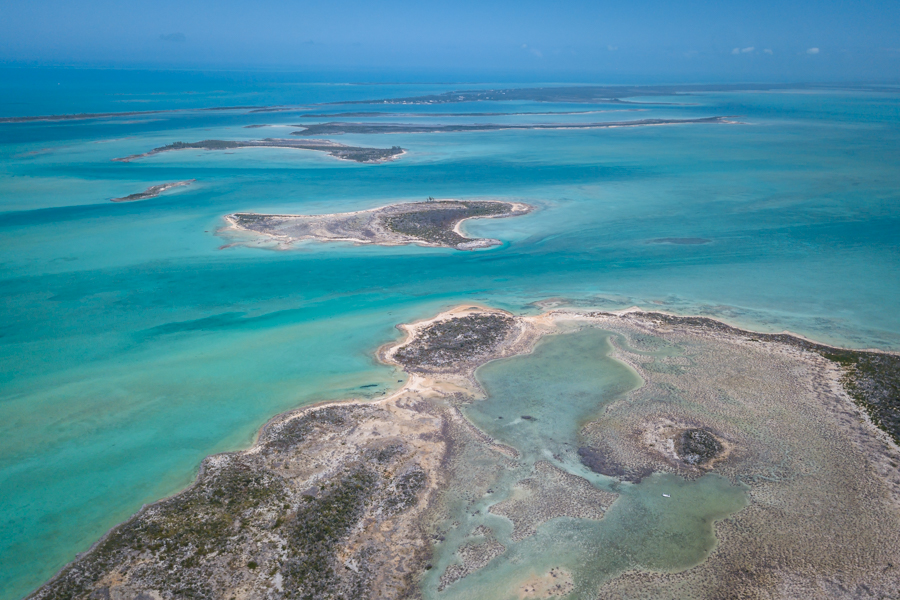 The sheer amount of fishable flats is impressive and anglers rarely, if ever, see other boats plying the waters. The fishing areas range from two minute runs around the corner to 45 minutes south or east toward Grand Bahama. In addition, a quick run through the West End cut to the oceanside, or a 40 minute trailer to Coopers Town, will provide a day spent fishing truly unpressured waters. 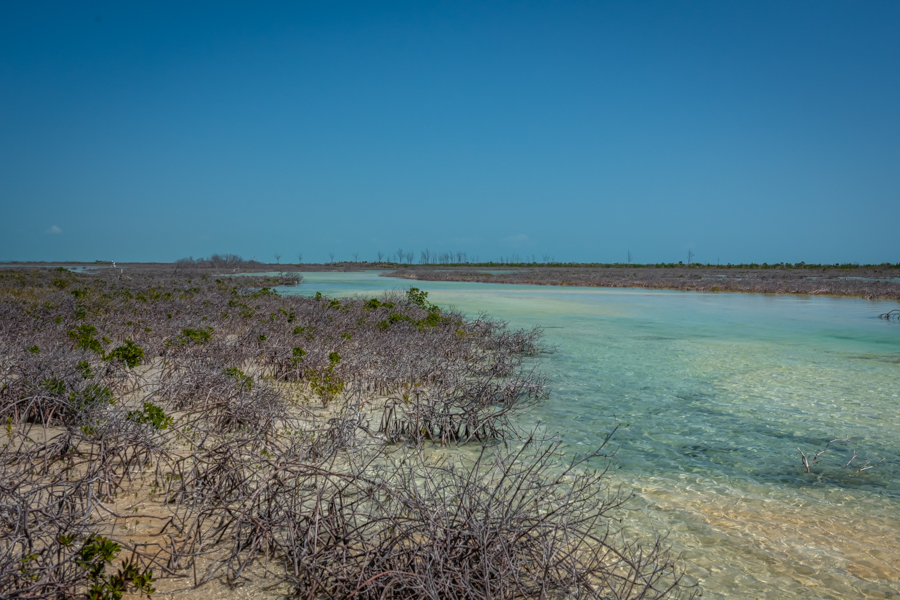 The flats all appeared to be in good shape with minimum debris from the hurricane. There was plenty of food for the fish and all the sea life seemed to be abundant. We saw shrimp, crabs, smaller fish, turtles, barracudas, multiple species of sharks, a few small permit, mutton and red snappers, and of course plenty of bonefish. The mangroves definitely suffered a blow but are already rebounding in areas with some green showing. Other areas were completely stripped and will likely take a number of years to regrow. 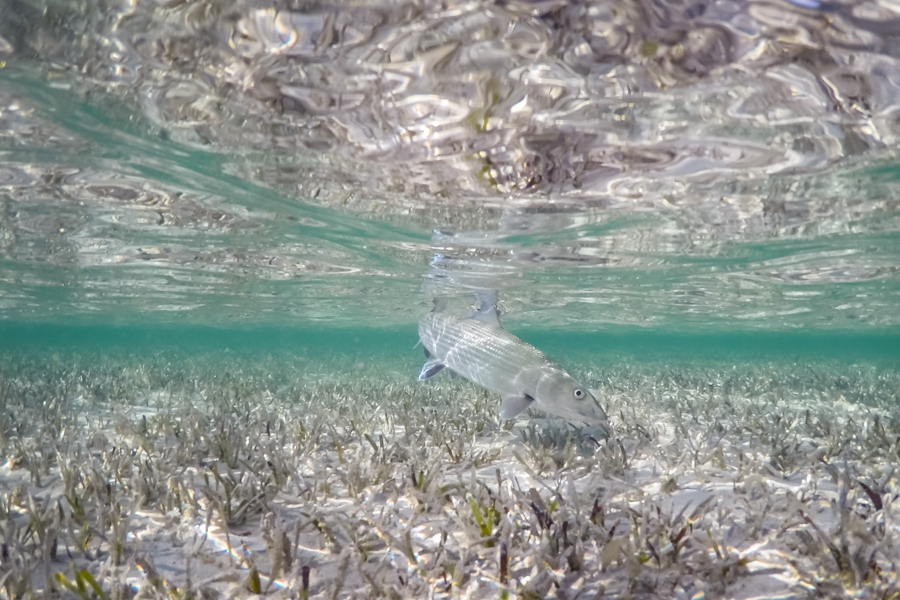 While I am a terrible fish counter (“catching” does not define a good or bad day in my book) and I don’t believe the others kept track either, I can again say the fishing was consistent with very few lulls each day. At certain times the fishing was flat-out gangbusters. The fish are healthy and fat. We estimated the average fish to be around five pounds. There were also plenty of smaller schoolies in the mix if you wanted to throw at them. We also experienced numerous shots at larger, even double digit fish that kept things interesting and each angler on their toes. All our fish boasted large shoulders producing powerful first and second runs almost always drawing you into your backing even at a stout drag setting on 16 lb tippet 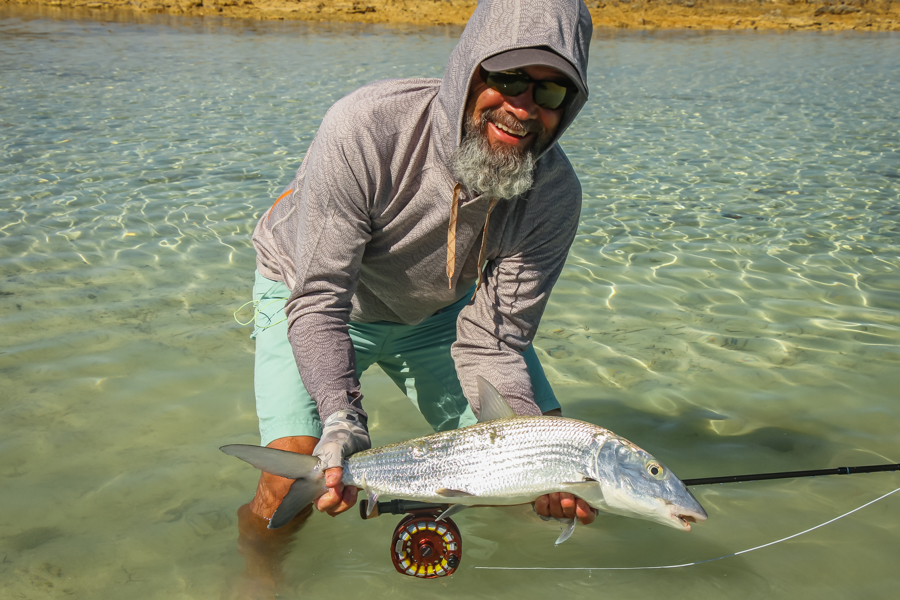 Even though the flats and fish have been resting for almost two years the bonefish were not “dumb" or "easy” by any margin. Bonefish are bonefish and they have not lost their instincts. However, I would say they were happier to eat the fly more often than not. The rate of fly eats and hookups was increased greatly with casts of 50-60 feet or more and good presentations. You have to remember that most of the time you're moving towards the fish and the fish is moving towards you, so think ahead. 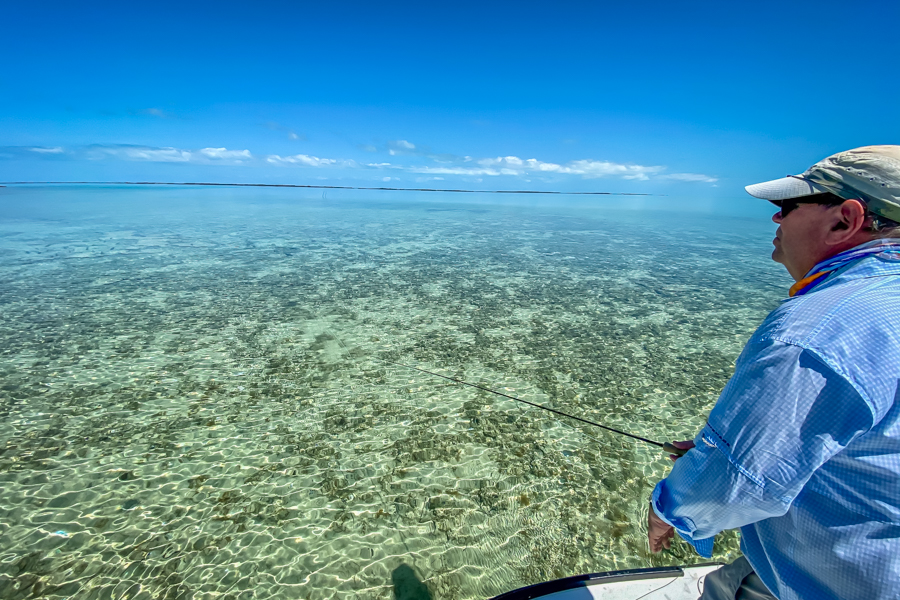 Remember not to wait until they are 50-60 feet to start casting. Start your cast when they are 70 or 80 feet so by the time you make a few false casts and get your direction dialed in, they will be at 50 or 60 feet. Follow this advice and you may get a second shot if the fish changes direction or refuses the fly at first look (although a lot of eats were downright aggressive takes). Don’t get me wrong, we spooked plenty of fish from errant casts or heavy fly "plops" in calm glassy conditions. We also had more than our share of fly refusals. But it didn’t matter with the number of good sized fish we were seeing. You always had another chance coming at you sooner rather than later. 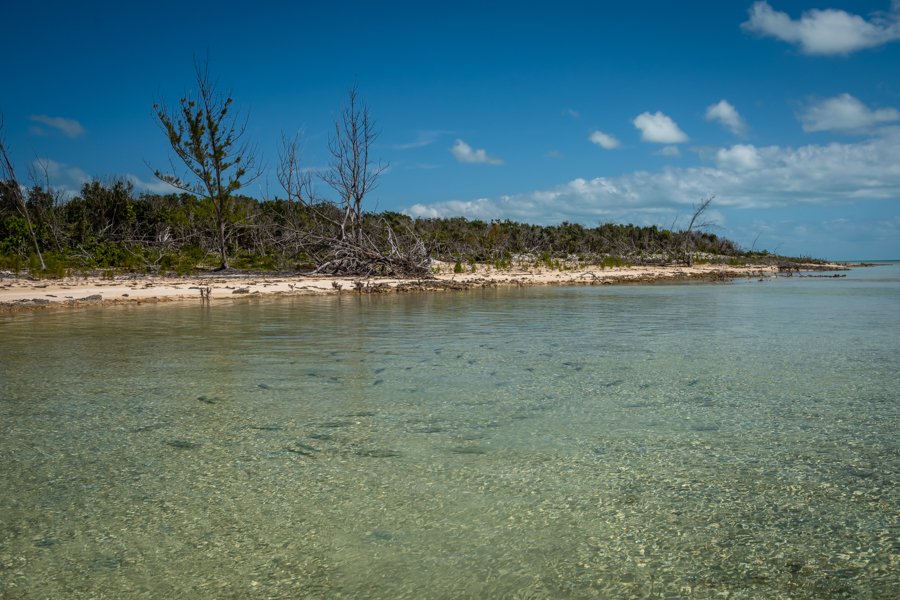 To say our trip to Little Abaco Bonefish Lodge was a great success would be more than appropriate. If you are comfortable and/or vaccinated, my recommendation to anglers would be to get on the water as soon as you can. You’ll not only enjoy some much needed fishing time, but also support the great people that provide all of us with the ability to enjoy our favorite, and/or, wish-list destinations. 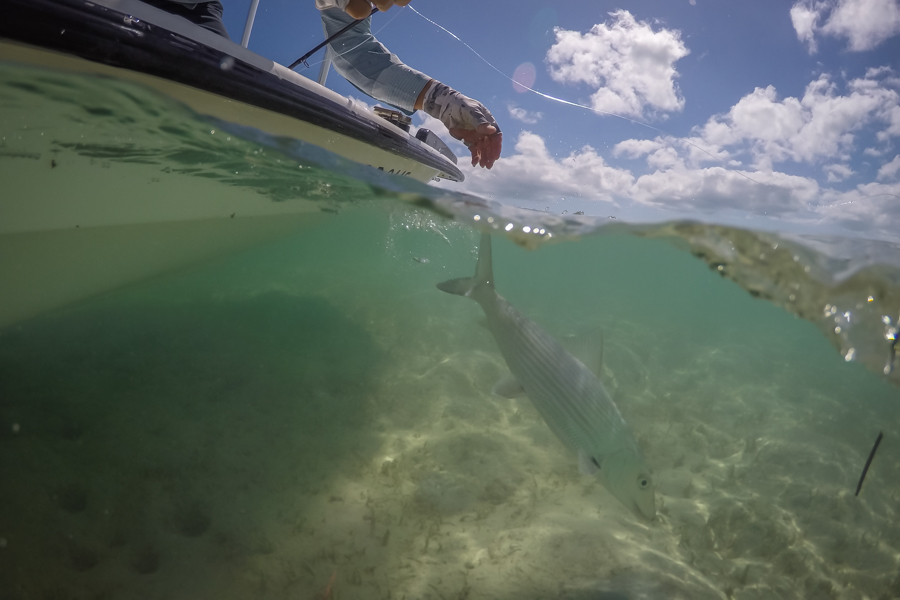 Please do not hesitate to reach out to us to find available dates for your next adventure. info@AnglingDestinations.com | 800.211.8530