There are those rivers that burn an indelible impression on your brain. Rivers that create moments you will never forget. Last weekend, I spent the first two days of the Memorial Day weekend on such a river. I drove over Powder River Pass to fish the legendary Wind River that flows through a spectacular canyon before it mellows out at the " Wedding of the Waters". As this topography changes, so does the river's name for below the "Wedding" the river becomes the Bighorn. Why the river has two names is something of an interesting mystery.  But it was no mystery why we were here...

I had never fished the canyon. I had kayaked the canyon quite a few times in the 80's and 90's. I knew the river had numerous Class II and III rapids and probably a couple Class IV drops, but had not experienced what the river had to offer to the angler. I had heard stories and seen pictures... I was to learn they were all true!

Over 2000 feet deep in some spots, the river slices through precambrian rock creating a stunning vista. The canyon lies on the Wind River Indian Reservation. The roughly 11,500 members of the Eastern Shoshone and Northern Arapaho Tribes are the only ones allowed to float the Canyon, except for one licensed outfitter. Tribal member Darren Calhoun owns Wind River Canyon Whitewater. Darren works hard to protect this resource. For guiding purposes, he divides trips into upper and lower floats and places a daily limit of only one guided fishing boat per section on any given day. This creates an exceptional angling experience. Each section is perfect for a day's float. To have one of the most spectacular rivers in the U.S. all to yourself for one day is an amazing experience. Now on to the fishing...

John Paronto and I joined Jim Maland and Peter Widener on this adventure. Jim and Peter fished the lower canyon the first day while John and I fished the upper; then we flipped on day two. 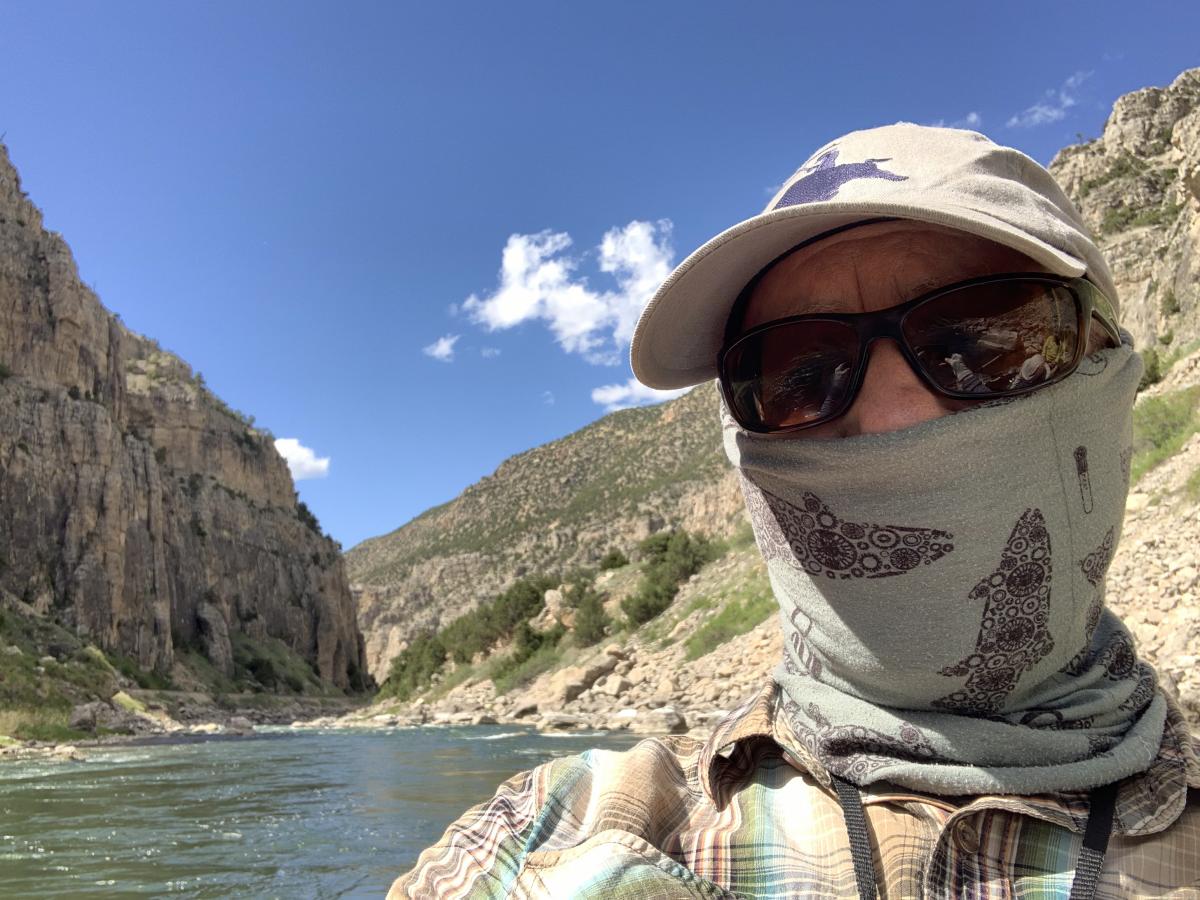 I must say each day was amazing. The upper section, beginning in the state park below Boysen Dam, is full of 20+ inch rainbows. These fish are fat. No, the are really FAT! Yes, we caught a few 16 inchers, but the vast majority were 5 or 6, even 7 lbs., all in excess of 20 inches. We hooked a few browns in this size range, but again, it was mostly rainbows. Almost all were caught on nymph rigs using small sowbugs and yellow sallie and baetis nymphs. I switched to a beetle late in the afternoon and did manage to get a big brown right at the takeout just as the sun left the canyon about 7:00PM. This was the perfect end to a perfect day. 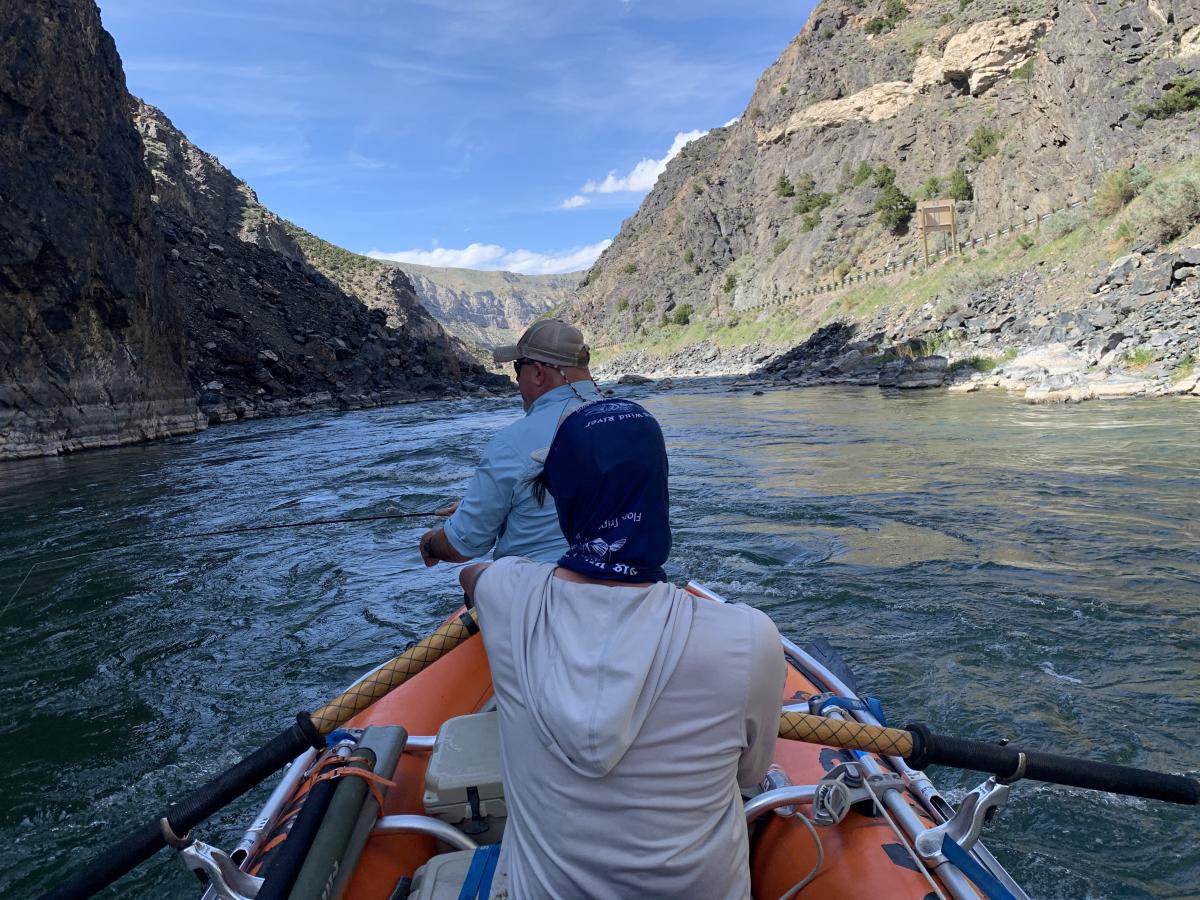 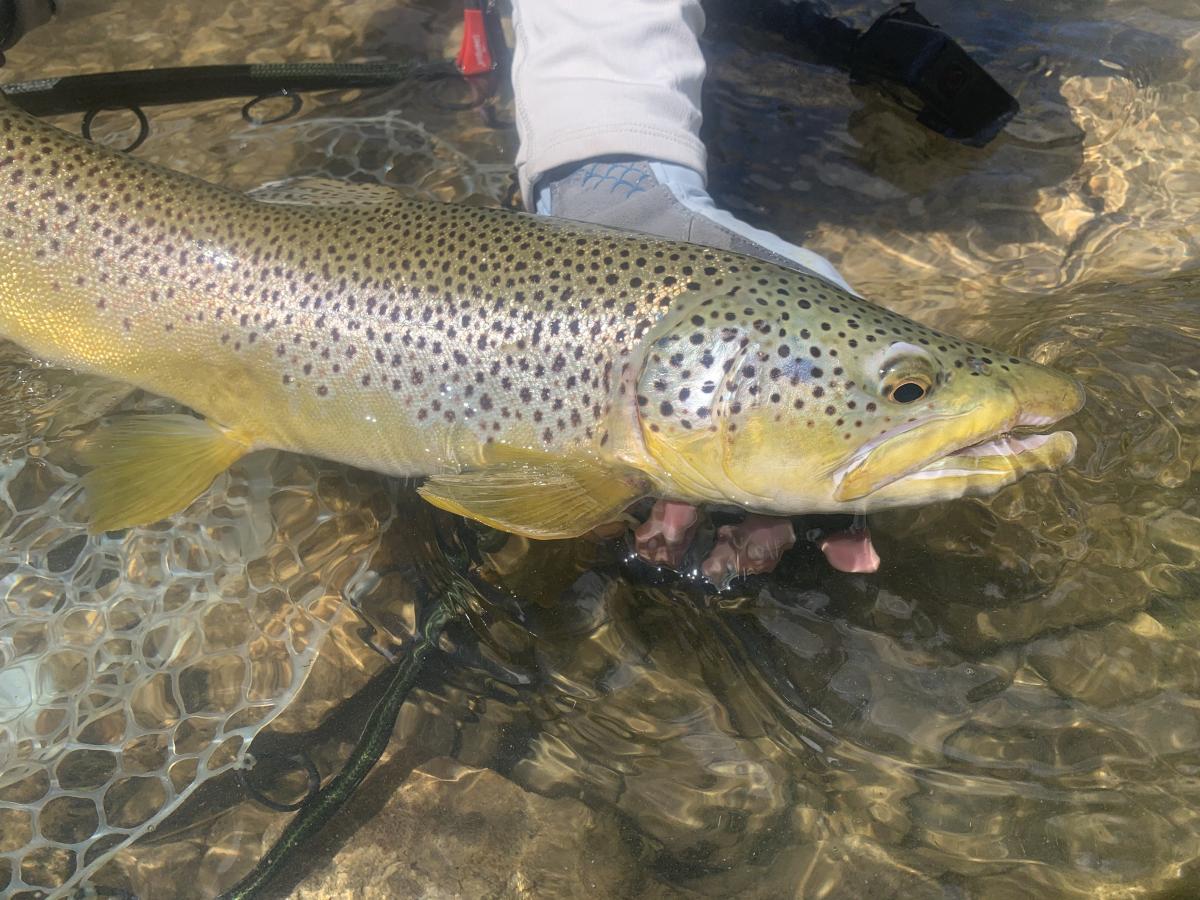 On day 2, we met our guide from yesterday, Nick Fiorini. We launched from where we had taken out the night before. It was about 100 paces from where we had spent the night at Darren's lodge (great food and accommodations... details if interested). I started off with a nymph rig, but quickly switched to a black Fat Albert. I decided to commit to the dry hoping to see one big head stick its nose in the air and inhale my big bug. I didn't have to wait long. At the swirl below a huge truck-sized rock, a big fish rose to inspect my offering. We rested the spot, then changed flies to a smaller foam fly. The fish rose up a bit in the water column, but did not eat. We regrouped and repositioned the boat on the other side of the run to get a better drift. I changed flies again. Our change of location gave me a better view of the topography of the run. I could now see the big rock had created a ledge on the downside. No doubt this big fish was right below that ledge relaxing in the slower water and rising up to eat whatever edibles sluiced by. 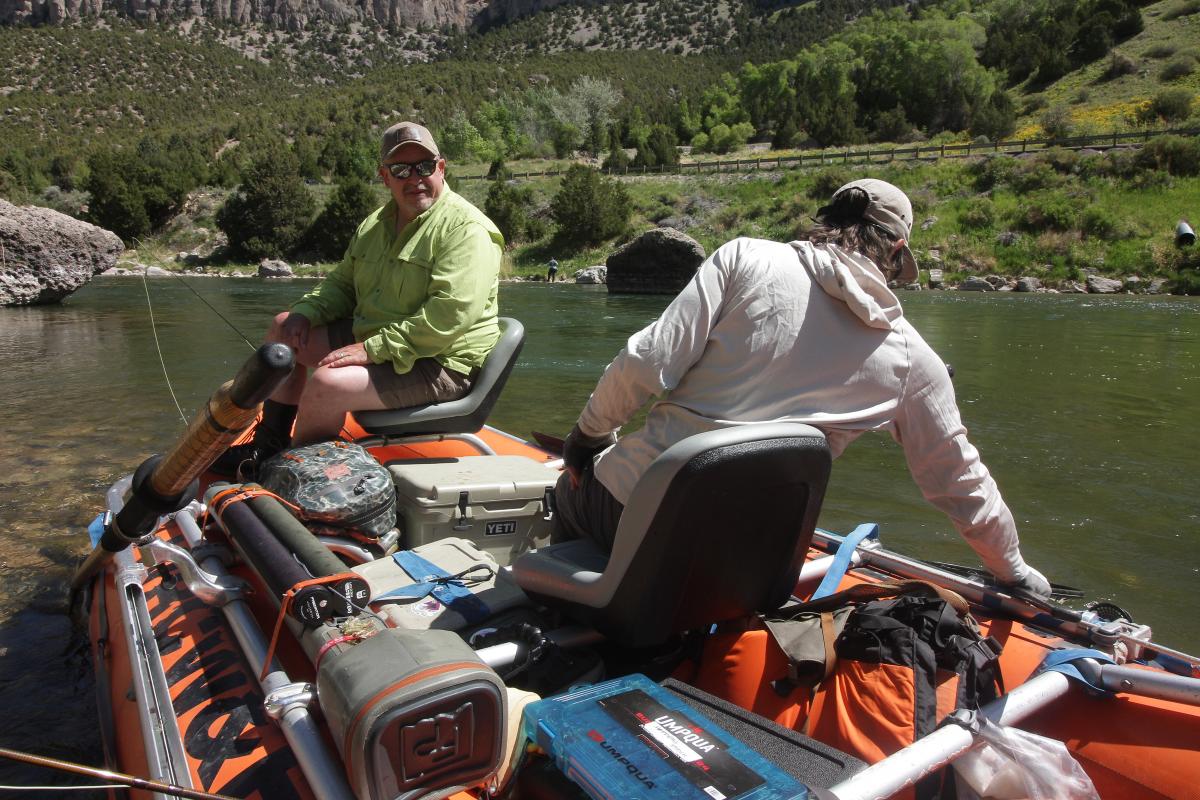 I took a deep breath, checked what vegetation was behind me and stripped off the line I thought I would need. I made a good cast up onto the ledge. The fly floated perfectly into the run. The anticipation was intense. As the fly slipped closer, a huge rainbow lazily climbed up in the water column and sucked in my fly. I firmly raised my rod tip and the fish was on. These Wind River Canyon fish are strong tough fighters and this fish was no exception. He ripped off upstream and I had to drop my rod tip to my side and pull hard to keep him out of the numerous rocks, weed beds and snags. It all worked and we were able to coax him to shore. Thanks Nick for being so quick-handed on the net. And Thanks John, for giving me a shot at this big bow. 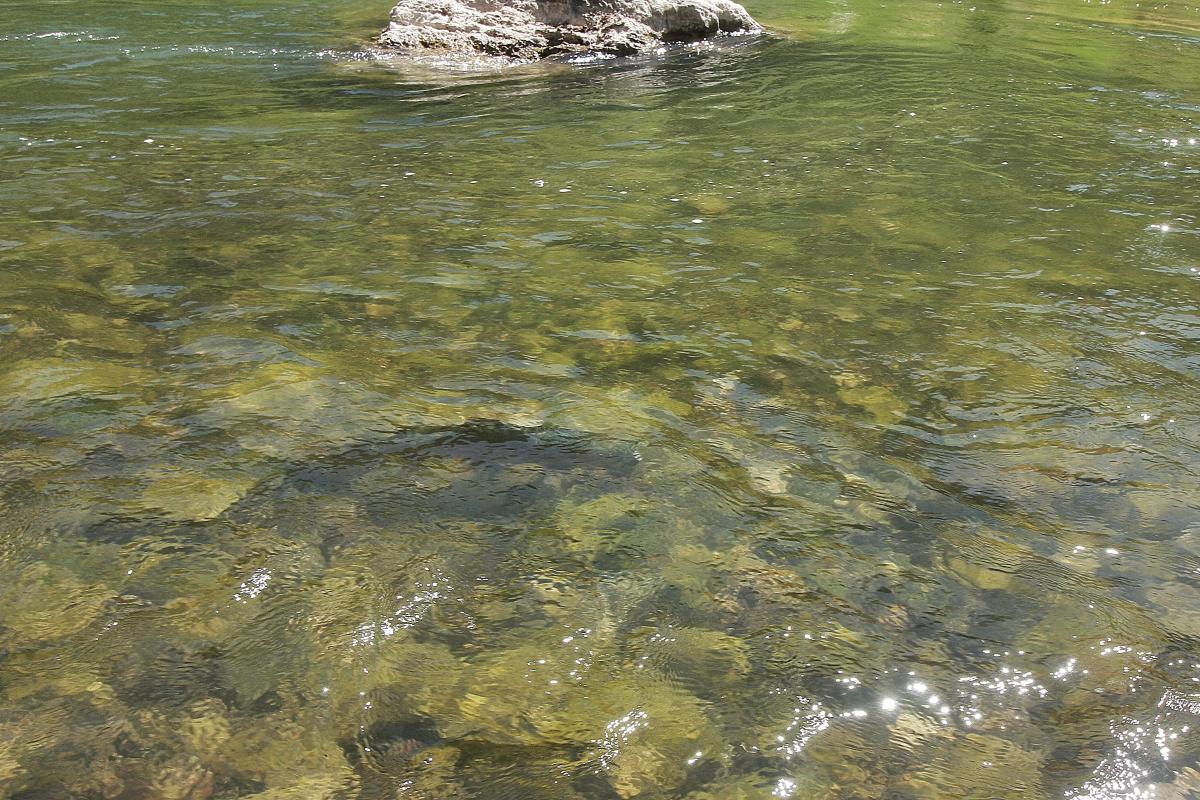 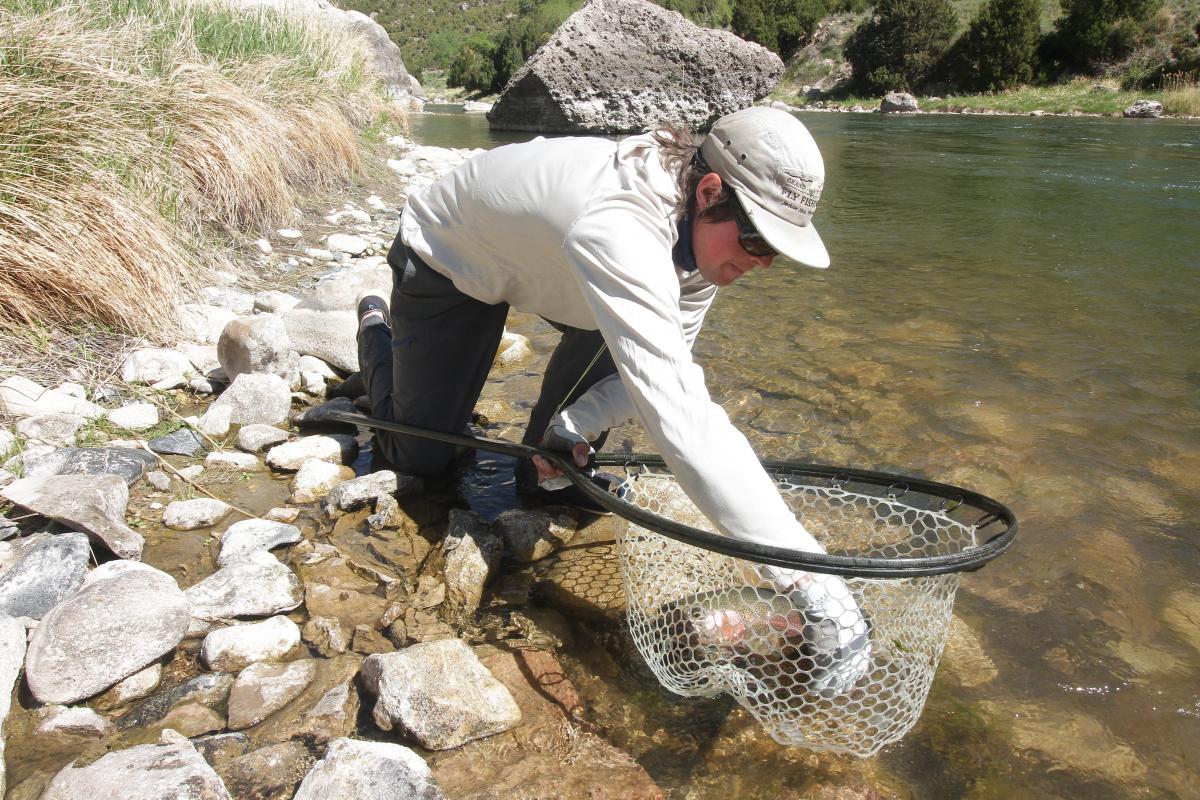 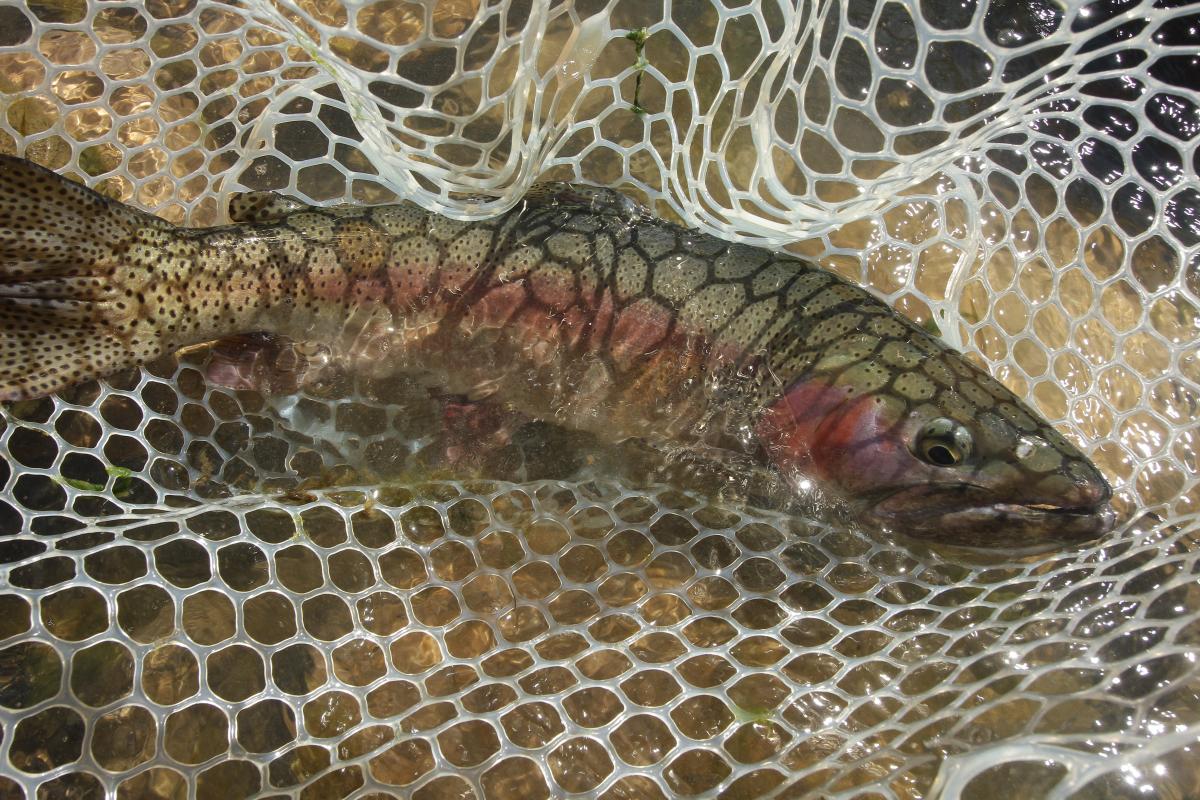 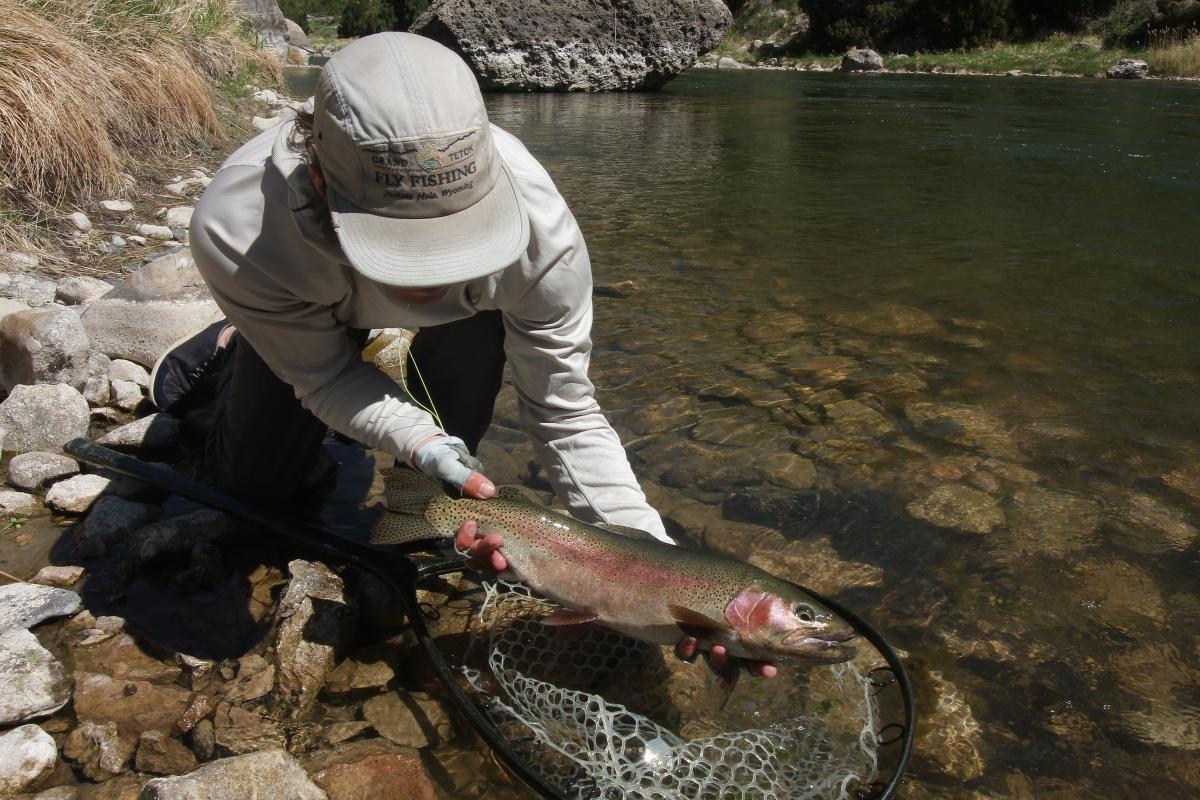 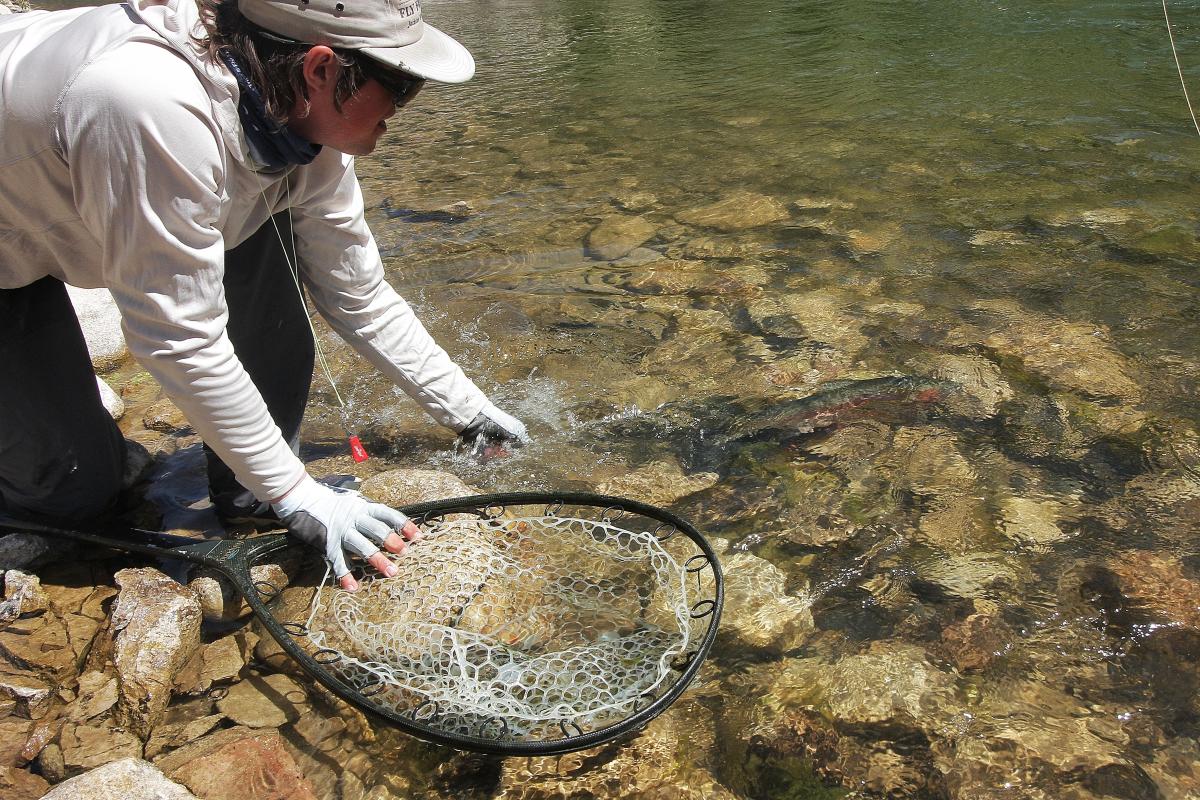 Now, I was even more firmly committed to the dry. I wanted one more eat and the day would be perfect. This is no doubt the mantra of the dry fly addict. As we dropped deeper into the canyon and sliced through rapids such as Pink Canyon, Sharp Nose and Washakie, the kalidascope of colors of the canyon's layers were accentuated by the bright greens of spring and the wildflower now beginning to bloom in force. It was a perfect day in one of Wyoming's most gorgeous spots.

Bathed in the beauty of these ancient walls, I began to pick up huge browns. I was using a black foam fly that I thought covered both beetles and any potential early arriving cicada. This choice was confirmed later in the day when we found a female cicada on a riverside rock. This was the first cicada of the season and bodes well for a bit of Brood X in Wyoming this summer!  My black bug worked like a charm. Of the 10+ fish I caught (I lost track early and usually do after fish number 3... it all becomes a glorious blur) all were over 20 inches with the largest being a 23 inch beast. John jumped in strong at the end of the day landing a 24 inch monster! A stunning fish and John's personal best! Nick Fiorini was a pleasure to be with. Fun loving, good on the oars, safety minded, quick withn the net, knowledgeable about rigs and flies and always encouraging and optimistic, Nick is all one needs from a guide to enjoy the most from this spectacular canyon. 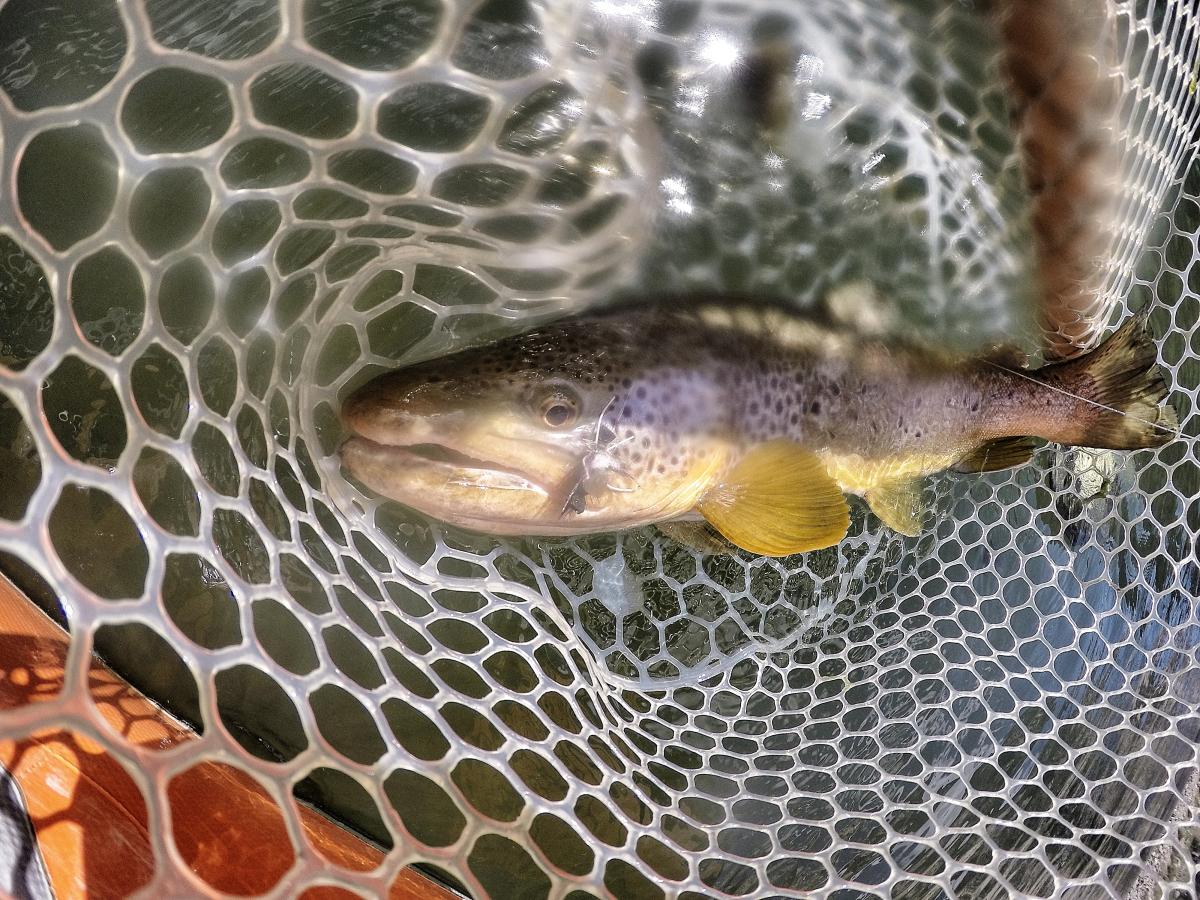 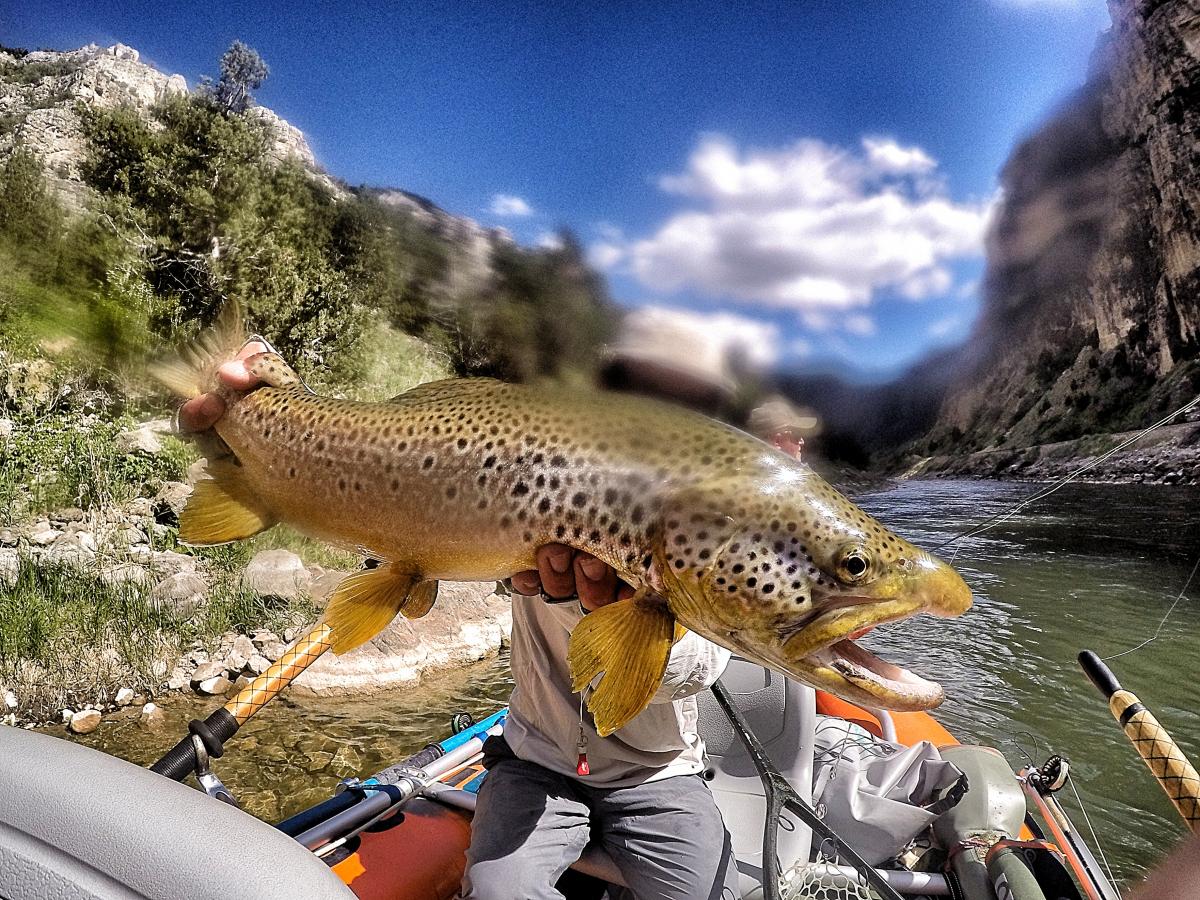 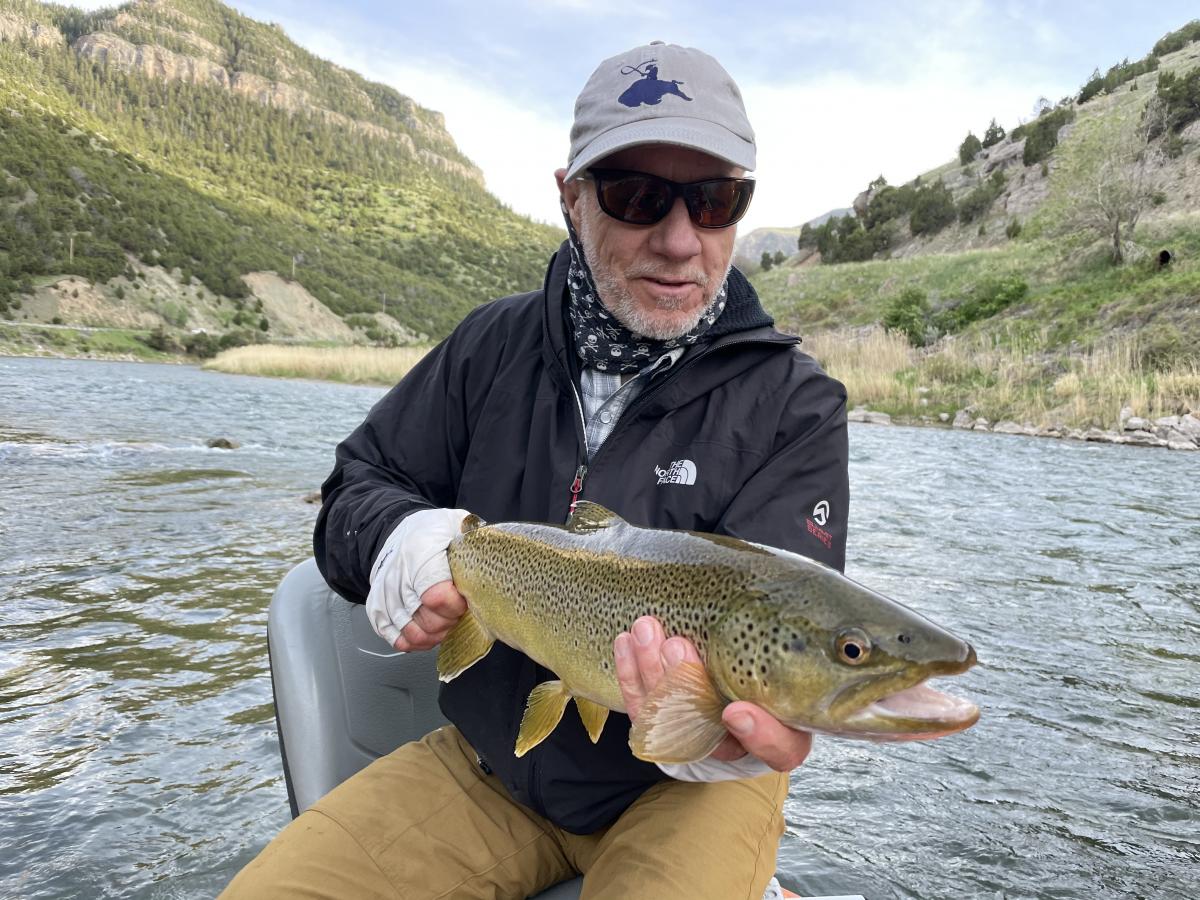 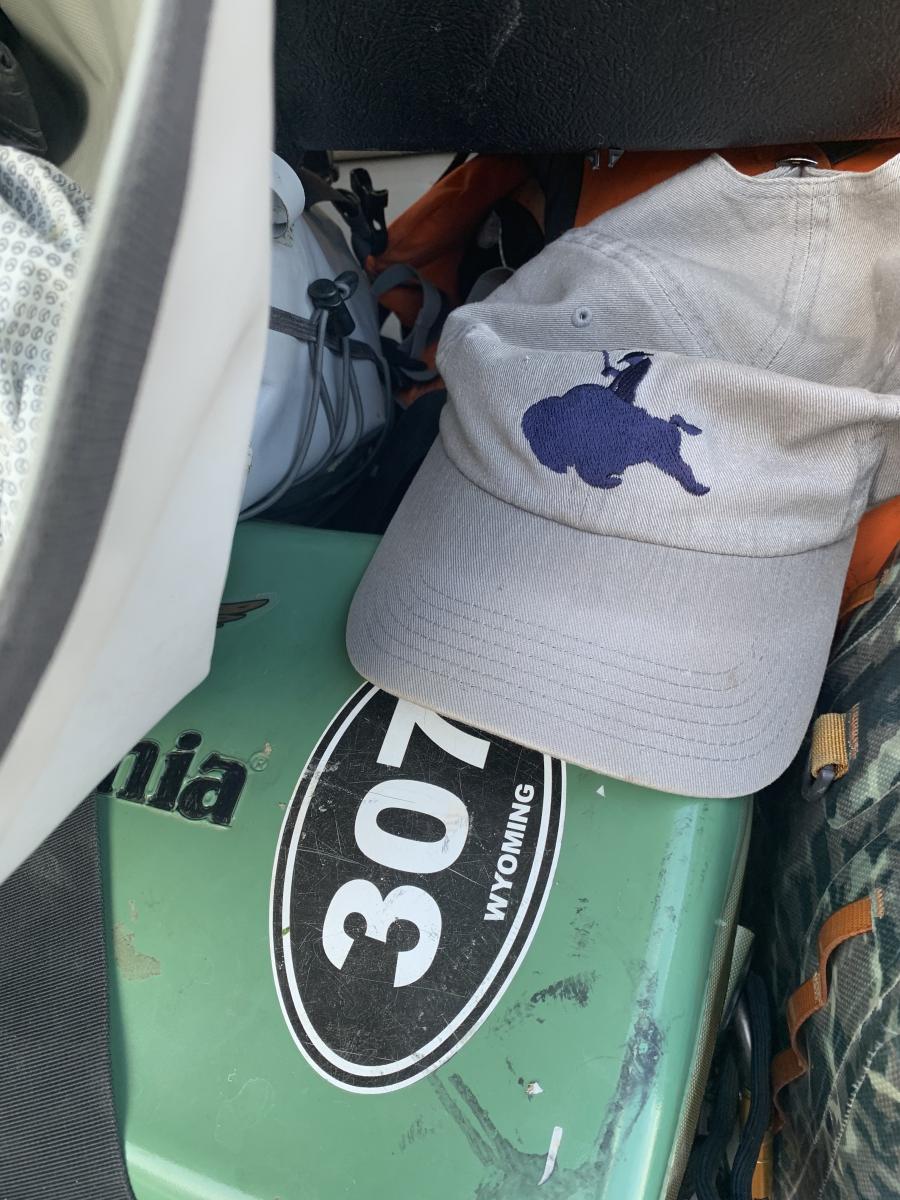 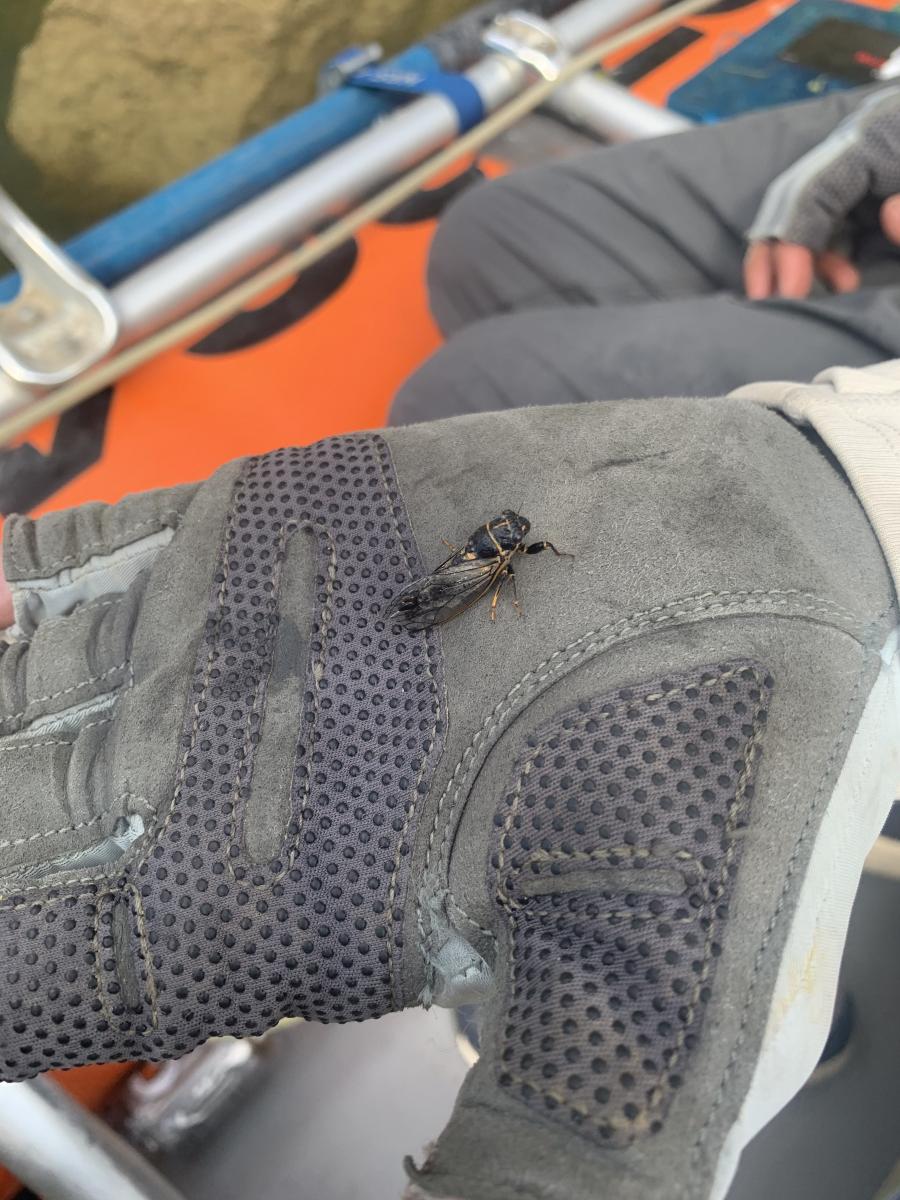 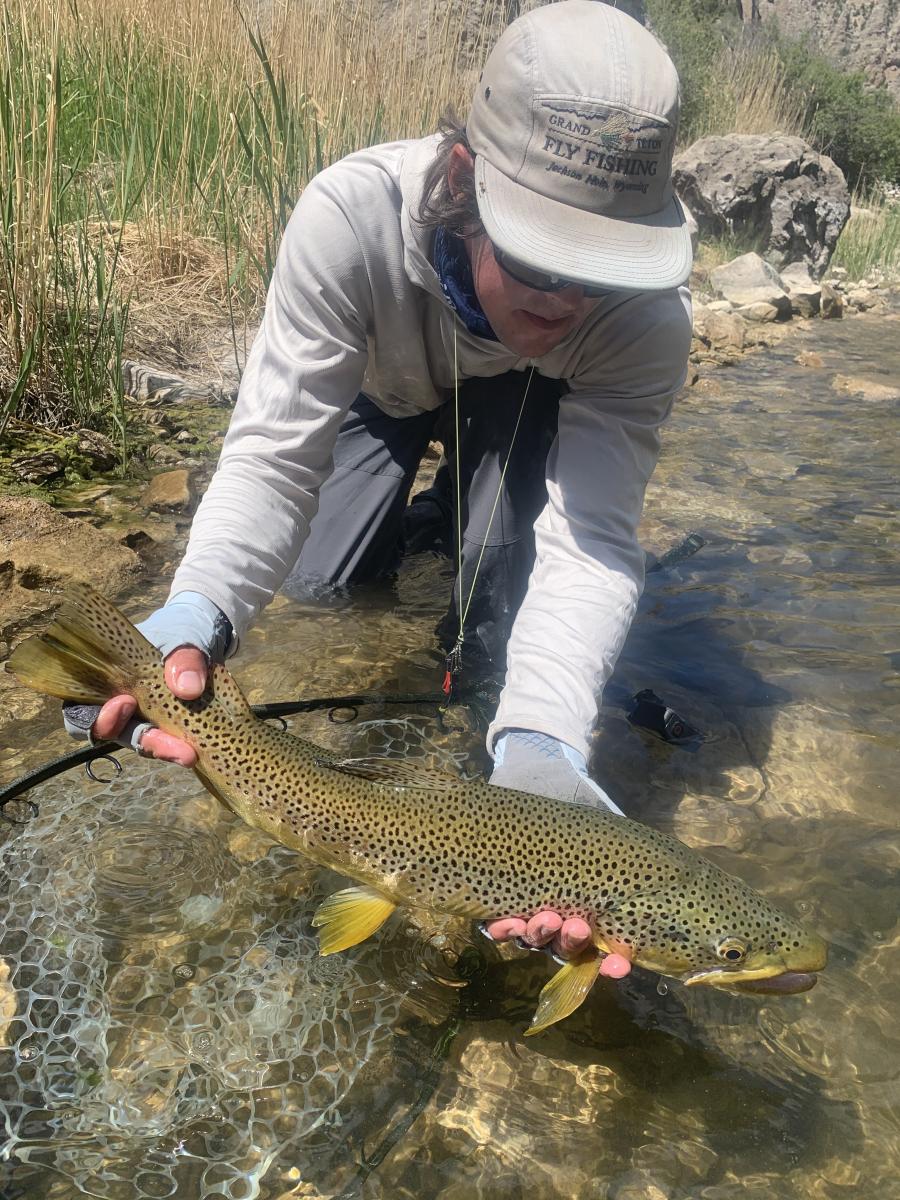 Thanks to everyone that made this adventure possible. This was an incredible experience and I'm already making plans to get back to the Wind for some of those "just one more" moments!