I left Sheridan at 7:00 am on Monday with my AD office mate Hank Welles. After a 2.5 hour drive and a couple quick stops for fuel and beer, we met Mike Schwartz at the put-in below Government Bridge on the North Platte River. It was already hot, but we knew it would get hotter as the day wore on. It was predicted to be approaching 100 today and tomorrow, then cool off to a balmy 88 on Wednesday.

After a quick rig-up, we shoved off immediately enjoying the cooler air we found at river level. Mike and I were on hopper droppers, Hank was on the oars. The first hour was very slow, then we stopped at a riffle to wade fish. In the fast water at the heads of the riffles, we started picking up nice rainbows. I was using a split wing PMD emerger and Mike was using a soft hackle caddis. After great success with my hopper, I committed to the floating bug while Mike stuck with the hopper dropper. We had consistent good luck until 3:00 when everything shut down. We worked hard to raise a fish, but eventually gave up and retreated to our campsite to dig out those cold Coronas we had so fortuitously bought earlier on the outskirts of Casper, WY from a fully tatted-up barkeep. 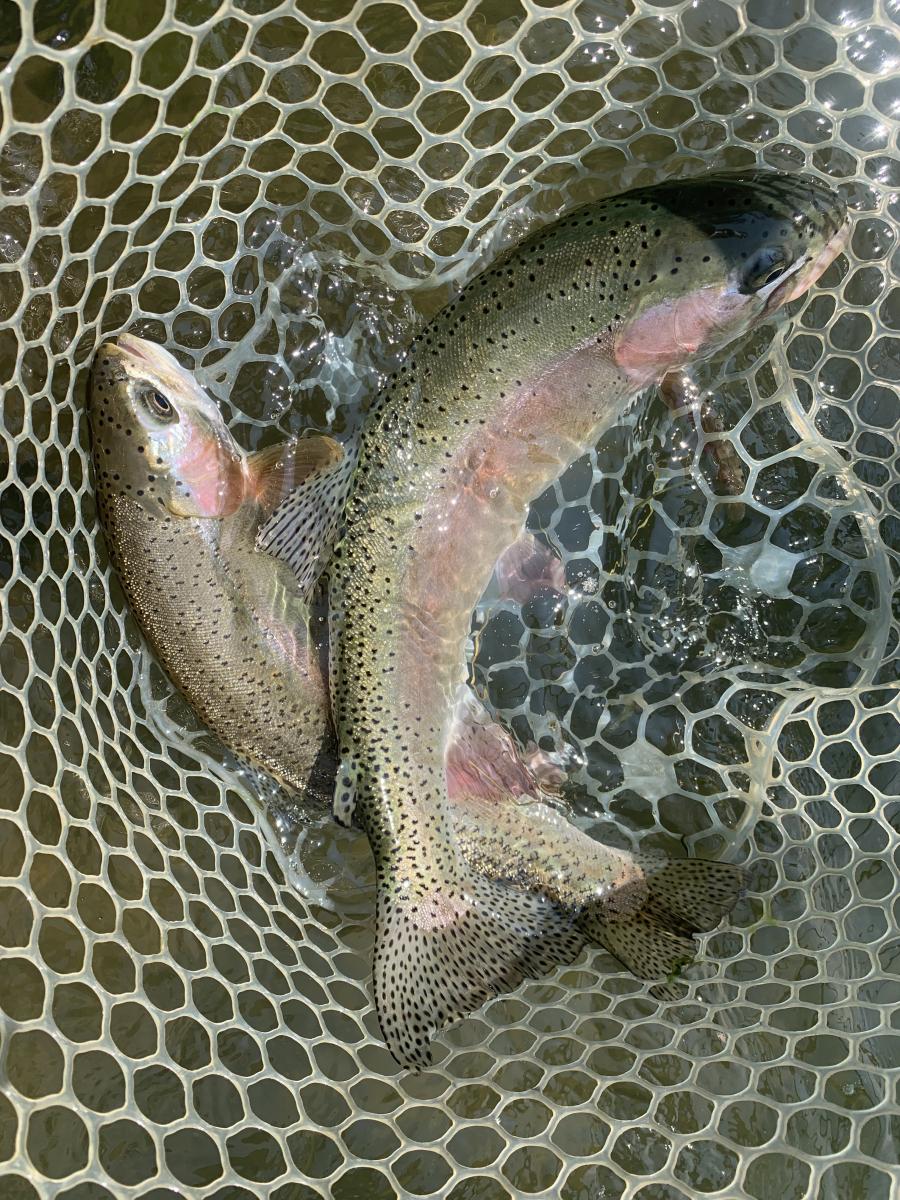 The next day we floated another short section on the Platte, but as the temperature soared and the fishing didn't, we retreated to another section of the Platte that ran through Fremont Canyon. Here the water was protected by steep canyon walls and the water was cold as it came out of the dam just upstream. On this mini-tailwater, we hoped to find one or two big trout. We knew cutthroats, rainbows and browns grew to prodigious size here, but we also knew drifts would have to be good and the likelyhood of failure was as probable as success. 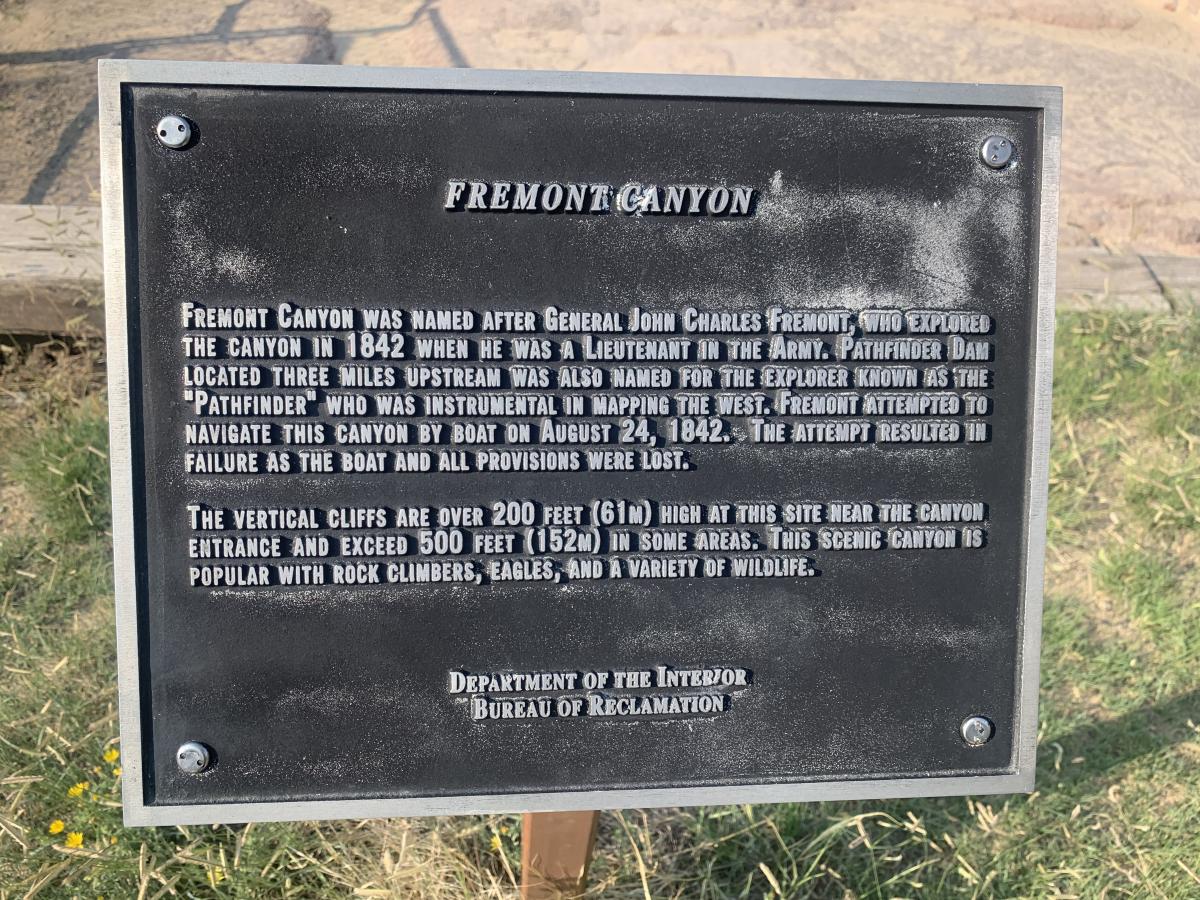 Luckily, we missed out on the difficult part and marched the other way. The fish in this canyon are big shouldered fish that pull hard and don't come to the net easily. Some of the hikes in are physical, especially on a 95 degree day. After one hike, I fell/dove into the water to cool off then waded carefully over slippery rocks to fish a fast run. I stood behind a boulder and high sticked the run. I hooked many big fish here and lost a few in the heavy flow. Often a hooked fish would dive under a boulder of bury themselves under a mat of moss. When you hook a big fish you really want to see that fish, but the rocks and moss sometimes made that difficult.

What I did discover, after an hour of standing in thigh deep water, was I was quite cold. Fresh from the dam this cold water bred big fish, but snuck up on a wet wader. My teeth were chattering and my legs felt a bit numb. I stumbled to shore and laid on the grass. The 95 degree temps quickly warmed me up. Absurd I know to be cold on a 95 degree day! But, to be absolutely clear, it was certainly worth it!

We caught rainbows predominantly, but also cutthroats and one 18" brown. (watch for a postscript to this fish in my next post). 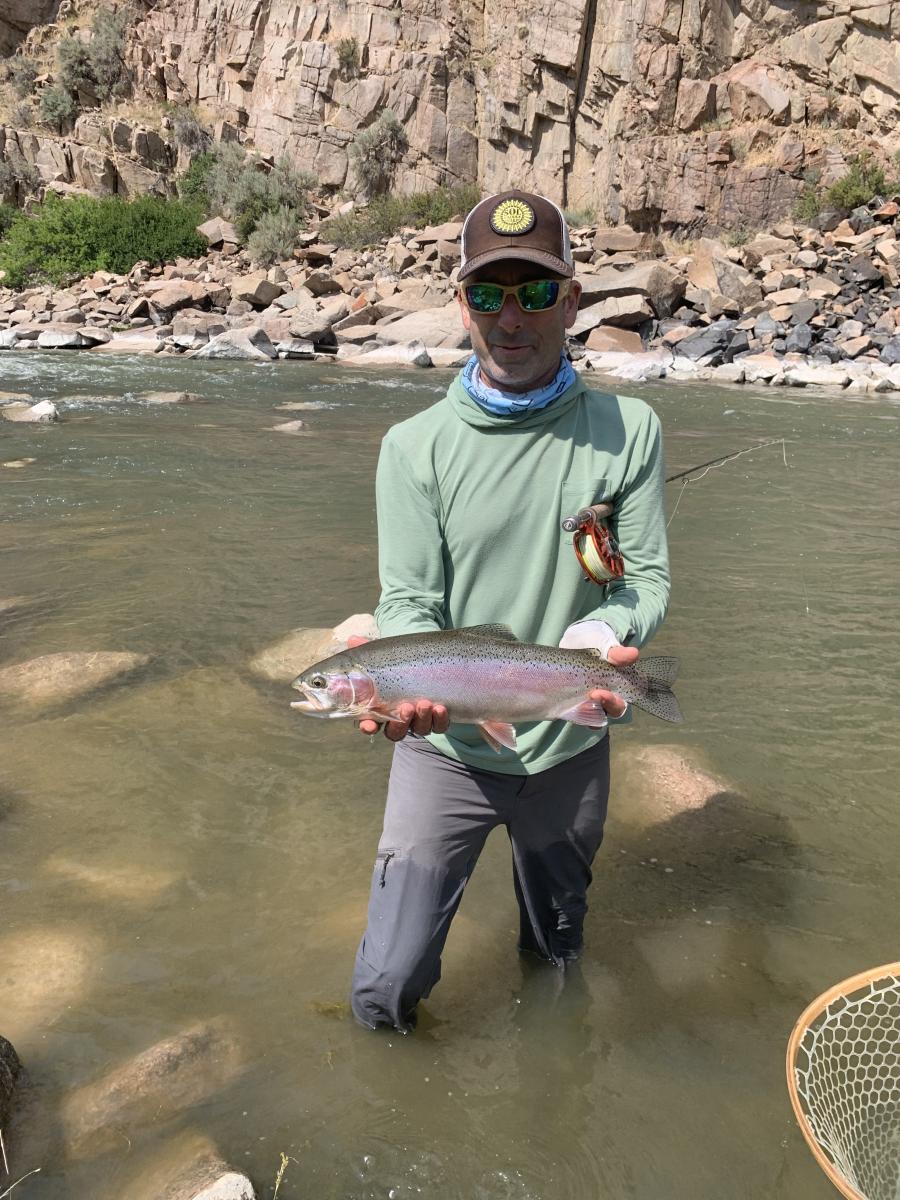 After a long hot day, we ended up camping on a hill overlooking a canyon strech of the river. It was a beautiful spot to spend an evening and made our Margaritas taste just a little bit better. 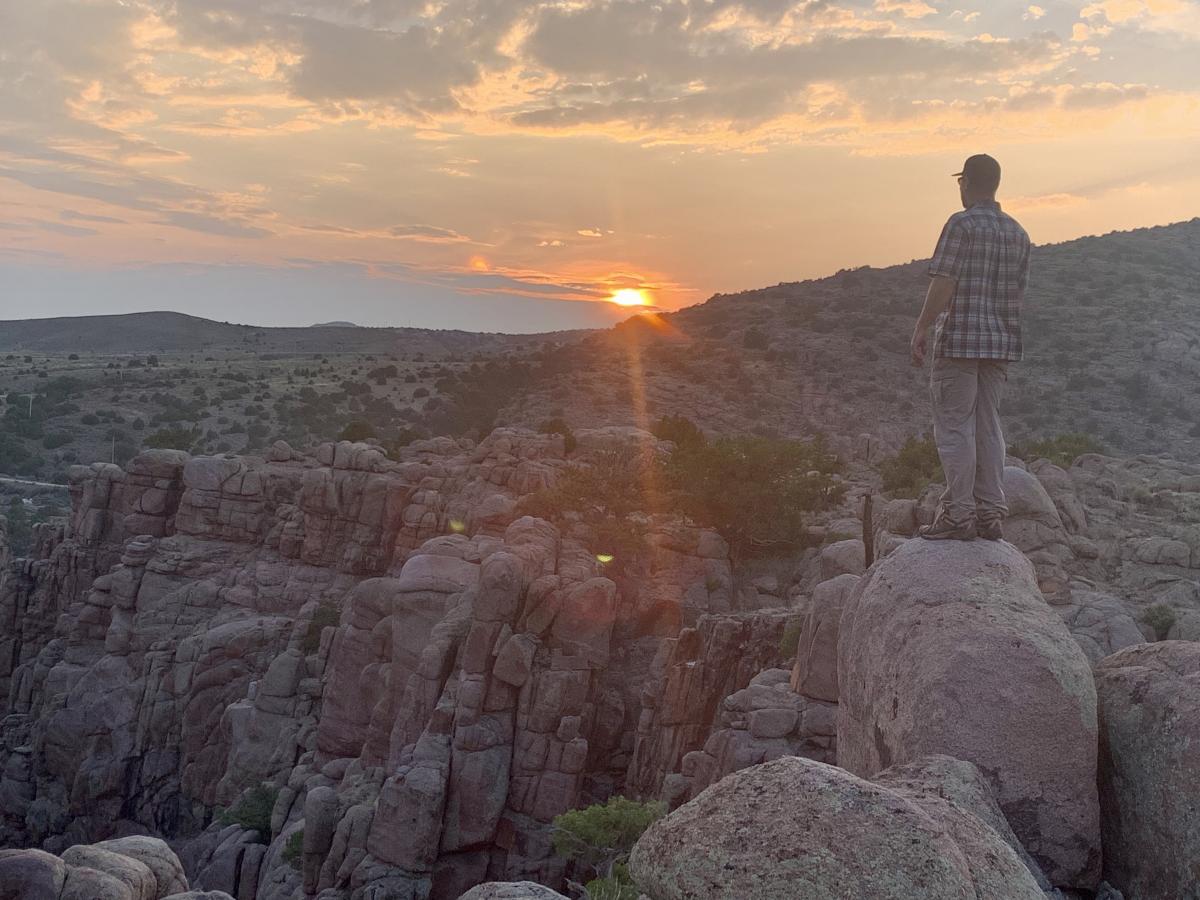 We parted company with Hank as he, unfortunately, had to repair his boat trailer. Mike and I motored up into the Bighorns for a great day on a high alpine stream. That evening we grilled some chicken and zuchinni at my house and enjoyed a few "old fashions" that Mike had pre-prepared before the trip. This was a fitting conclusion for a great trip.

Many thanks to Mike and Hank! We will need to do this again!