November 18 dawned with promise following two and a half days of windy, cloudy weather punctuated by passing squalls. Scott Heywood was the Angling Destinations host for this trip and he arranged for Mike Schwartz and I to fish with Leo that day, knowing that Leo was the permit guide.

It was one of those days that was meant to be; clear skies and light wind on the back end of an extended cold front, a good area for permit, a guide who was focused on permit and who made sure we knew the drill before we were on fish and two guys who could cast.

Mike was on the bow first, sometime just before 9:00 am.  Leo poled a long light-bottomed flat and after about 10 minutes he made a noticeable change in direction and speed. I noticed his eyes lock in on something at least 100 yds away.

Before I could spot the ray from my seated position, Leo had already confirmed, “Yes, there’s a permit with the ray.”

In sotto voce Leo said, “No talking now.  Remember to cast within a foot of the ray, behind or to one side, but not in front or over it. Take out the slack with a long, slow strip, then make short strips. Do a long strip once the permit takes.”

When we were 50-60 feet out, Leo gave Mike the green light…and Mike delivered a beautiful cast…straight, accurate and graceful.  The permit turned off the ray and dropped on the sinking Alphlexo crab.

“You got him!”, Leo exclaimed, but Mike already knew that.  The line was tight and the ray had turned and was starting to make its first run.

Leo was as excited as a kid at Christmas and Mike was focused.  It wasn’t his first dance with a nice fish. Ten minutes later the fish was at boat side and we were taking pictures and exchanging high fives.

After we had caught our collective breaths, Leo went back on the poling platform and I took a turn on the bow.  Fifteen minutes later, it was deja vu all over again.  Somewhere in the offing Leo spotted another ray, this time with a couple of permit on it. He closed the distance and coached as we approached, being sure that I both saw the fish and had the moves fresh in my mind.  When he turned me loose on the fish, I made a single cast a foot off the ray’s five o’clock.  The closest permit turned and ate before the crab was halfway to the bottom.  There’s nothing like a little intraspecies rivalry to up the ante!  The hook-up was solid and after several runs, we had a second hard-muscled fish played out and in hand.

The bonefish were next.  They were supposed to be the easy part of a three-part equation and the tide was right; just turned and rising.  Following a short run to a bonefish flat, Mike hooked up and landed one right away.  When I got on the deck, I hooked a smallish fish that came unpinned at the end of its first run.  We had a barren stretch for the next twenty minutes and then came upon an active bunch of small bonefish.  Leo kept calling fish, mostly before I had a chance to complete a cast to the one he had just previously called.  Fish surrounded us and were darting about like crazy; it was an outtake from the Keystone Kops!  We would all have been better served had Leo just called one fish and then kept quiet, but he was intent on getting the slams and he didn’t know my skill level, so he continued to fill the air with directions while I filled it with flies.  The results were predictable.  After the bonefish scattered and the mud settled, Leo punctuated the whole event with a deep, audible sigh.  I knew that he could see his day of glory slipping away. 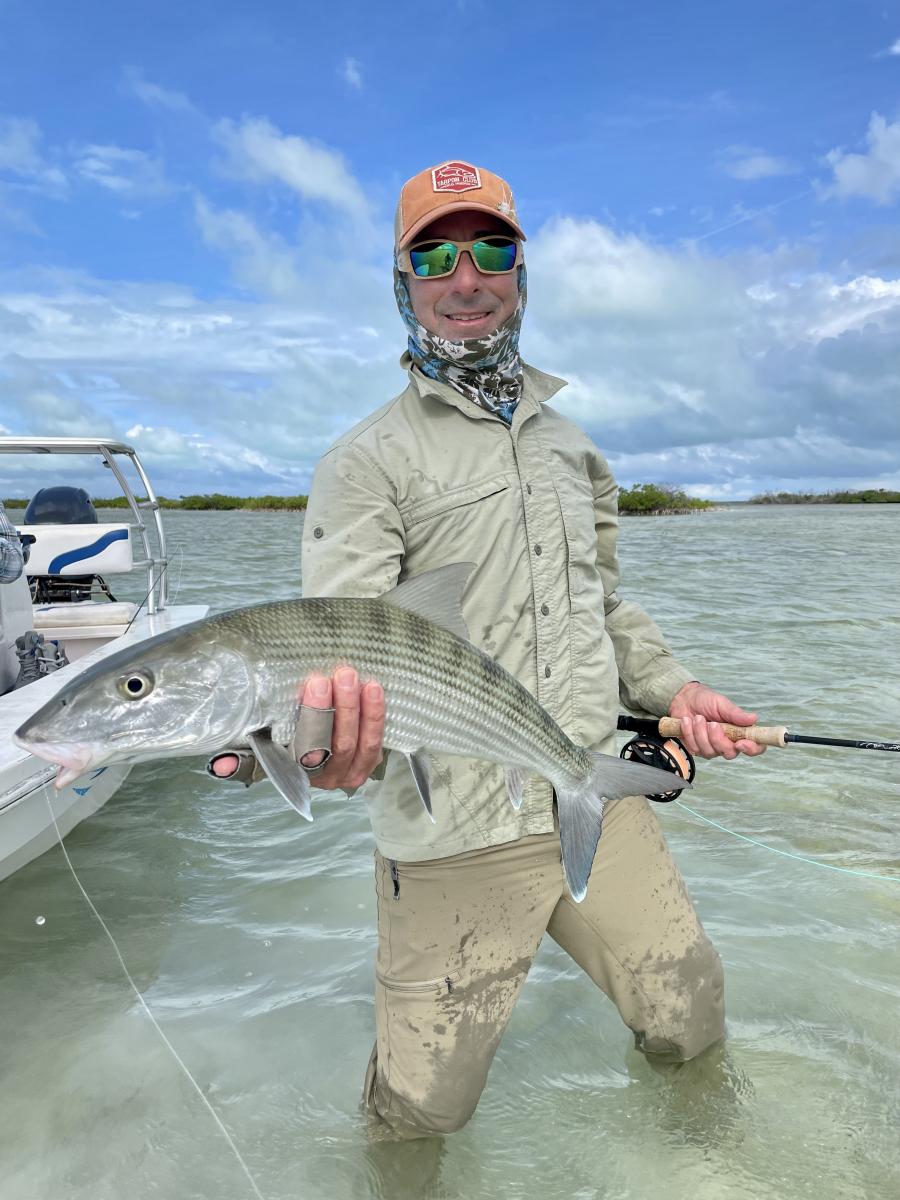 A short distance later, he put me over a shallow mud, my absolute least favorite way to fish for bones, but given all that had transpired, I didn’t object and I landed a bonefish….the smallest one of the trip!  Mike and I laughed at the irony of it, but I think Leo’s laugh was more of the stress-relief variety.  No matter, part two was done!

It was mid-day by then, so we ate lunch and then split for a tarpon hole, the same one that Scott and I had fished on Day 2.  It was a 20-foot-deep hole surrounded by a huge expanse of 6-foot-deep water. The tide was still rising as we staked out at its edge.

Leo said that full sink lines were the best choice for a hole that deep, but all we had with us were 1.5 ips sink tips.  We rigged Mike's 9 weight rod with that line, a bite tippet and a heavy-eyed deceiver, then shared that rod. It required long casts and a long sink time to get the fly down, but we made it work.  I jumped a tarpon right off the bat, but lost it on the 3rd jump.  Mike came up on the bow and landed the first tarpon he jumped, one of about 15 pounds. It made a flip and self-released just as Leo grabbed the hook, so we never got a grip-and-grin photo of it. 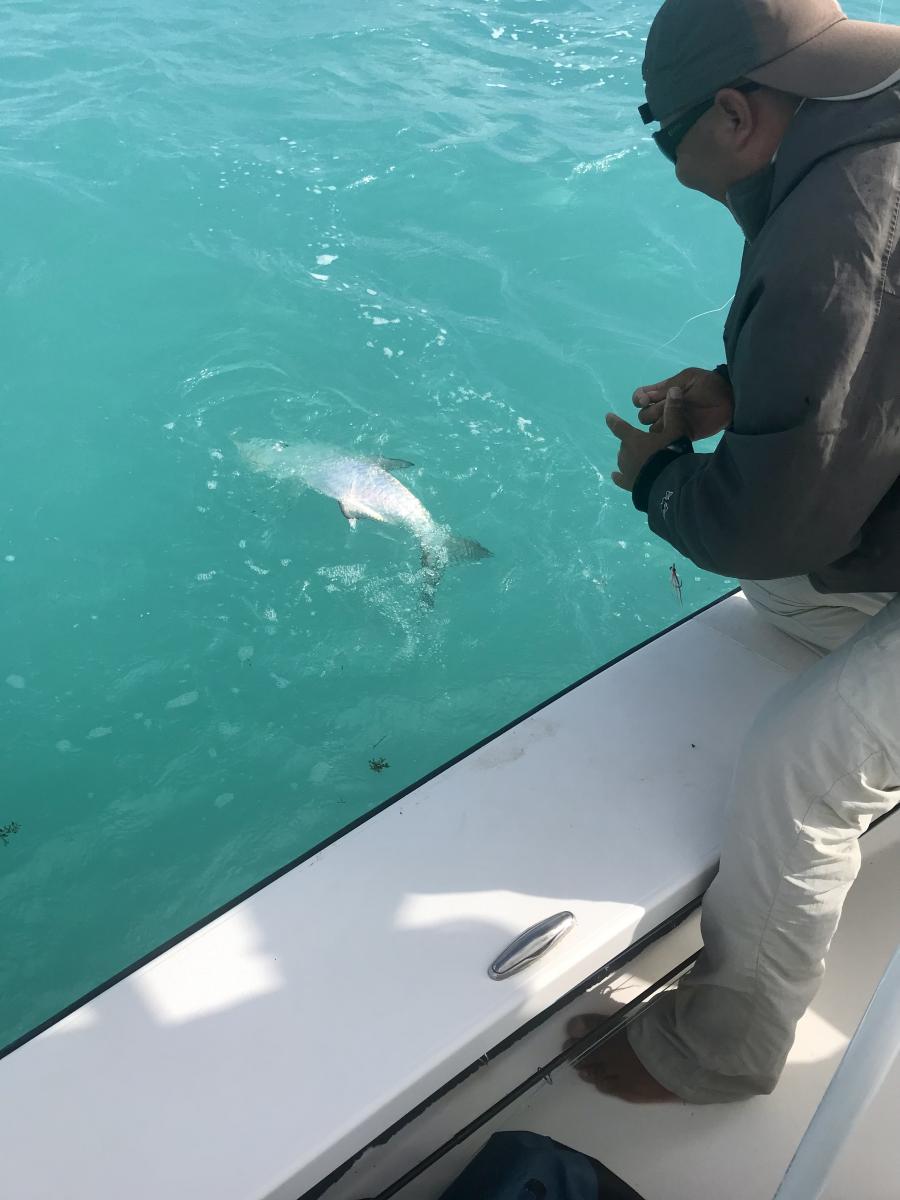 I got back on the bow, jumped another tarpon and landed this one.  It was similar in size to Mike’s and like Mike’s, this one also came unhooked as Leo grabbed the fly.  Mike got a couple of quick photos of it as is came free.

The deed was done, a double Grand Slam off the same boat on the same day.  I asked Leo how often this happens and he said once every 4-5 years!  Mike and I were happy, but Leo was absolutely ecstatic!!

We still had a couple of hours left in our day, so we stayed over that hole for the duration.  We hooked 3 large cubera snapper after the tarpon rodeo, all by hooking a smaller jack and then letting it free-swim until a cubera would eat it. We would then free line the cubera for a couple of minutes until we were satisfied that it had swallowed the smaller fish, and then would start to fight the cubera.

Mike landed the first one he hooked after a down-and-dirty fight.  The cubera I hooked sawed through the bite tippet before I could bring it to boat side! Mike hooked his second cubera toward the end of the day, but that one came unpinned by regurgitating the smaller fish.

With tired shoulders and large smiles, we put away the rod and sat down. Two rain squalls had skirted us during the time at the tarpon hole, but neither had touched us. The sun was just peaking around the edge of the last squall as we hoisted a beer and saluted the day!